Luka Lindič climbing the 4th Child of the Watzmann Traverse, Berchtesgaden in the background visible

Inspired by the perfect skyline that the Watzmann Family forms, we ventured into the area several times this winter during preparations for our Himalaya expedition. We kept the whole traverse in mind as an optional “training project” for our ambitious goal of the south face of Shishapangma (8027m) in Tibet, which we will attempt this year in April/May, since it promises a long climbing day in the mountains. The fact that we couldn’t find any information whether this traverse had already been done in winter or not made us even more motivated. The winter started early this season and offered great ski touring in the Watzmann area. With the big amount of snow and the warm temperatures later around Christmas the conditions for powder skiing changed into packed snow better for alpine climbing. 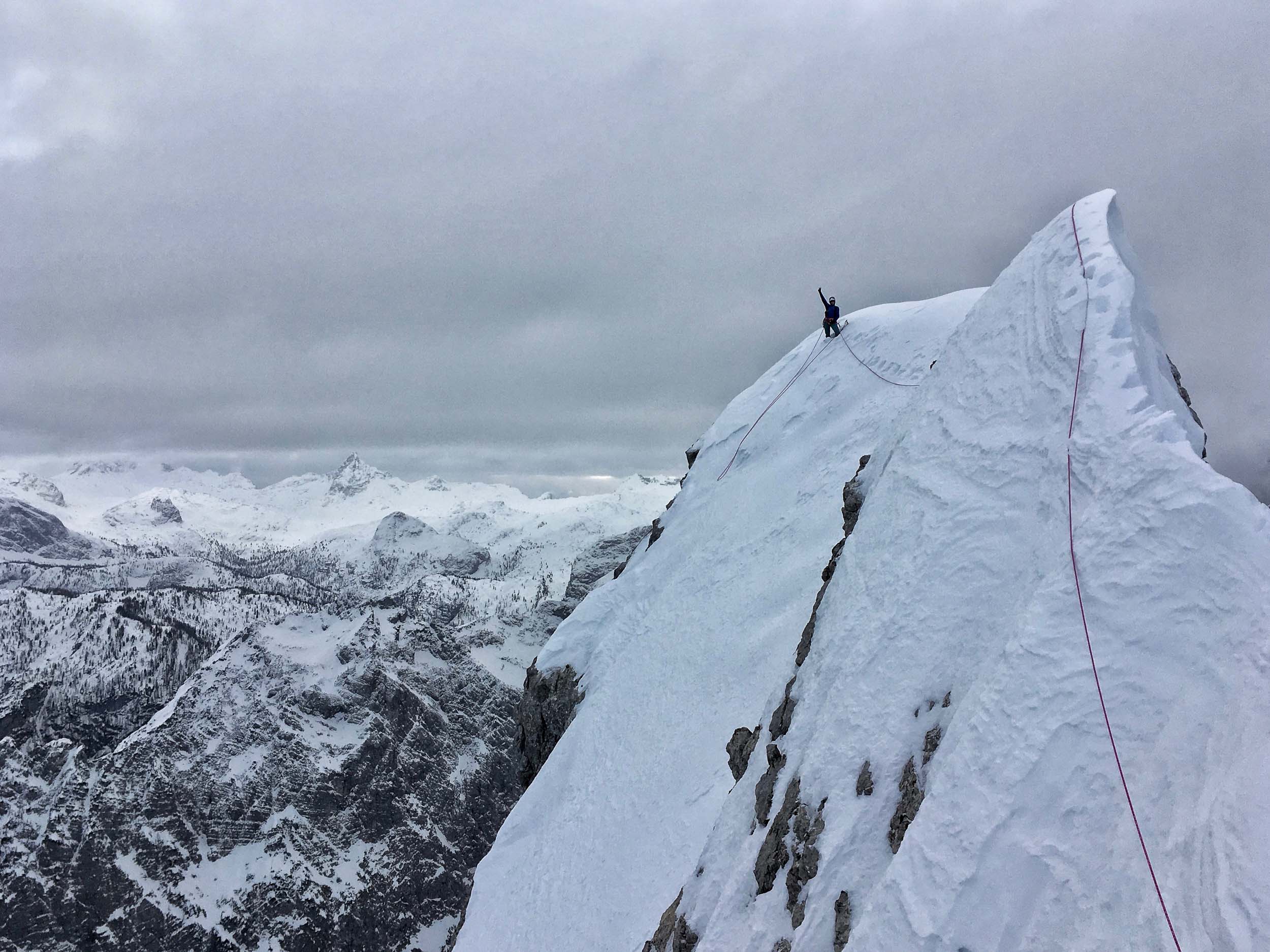 Luka Lindič on the exposed summit of 4th Child (Jungfrau)

We somehow got the feeling that the most logical direction would be from east to west, starting with the smaller of the 2 main Watzmann summits (Kleiner Watzmann) and finishing on the highest point, Mittelspitze Watzmann 2713 m. We started the climb with the idea of staying as close as possible to the skyline but using the weaknesses in the terrain that sometimes lead you to the left, sometimes to right of the ridge. 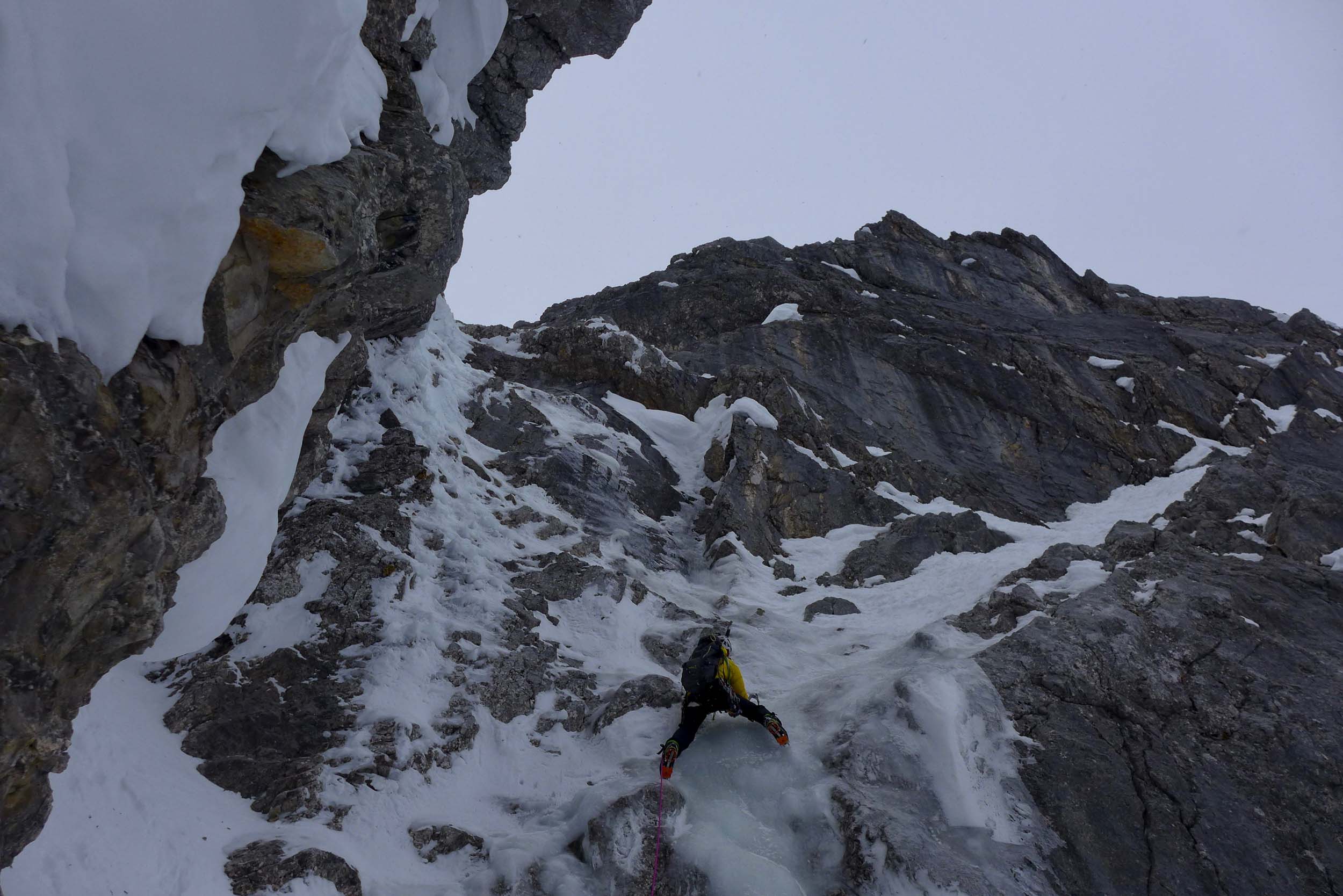 From our knowledge we had to wait for the perfect day to make the attempt reasonable without obvious risks like avalanches. The 11th of January promised cloudy skies with good temperatures. Perfect, this was the day to go. 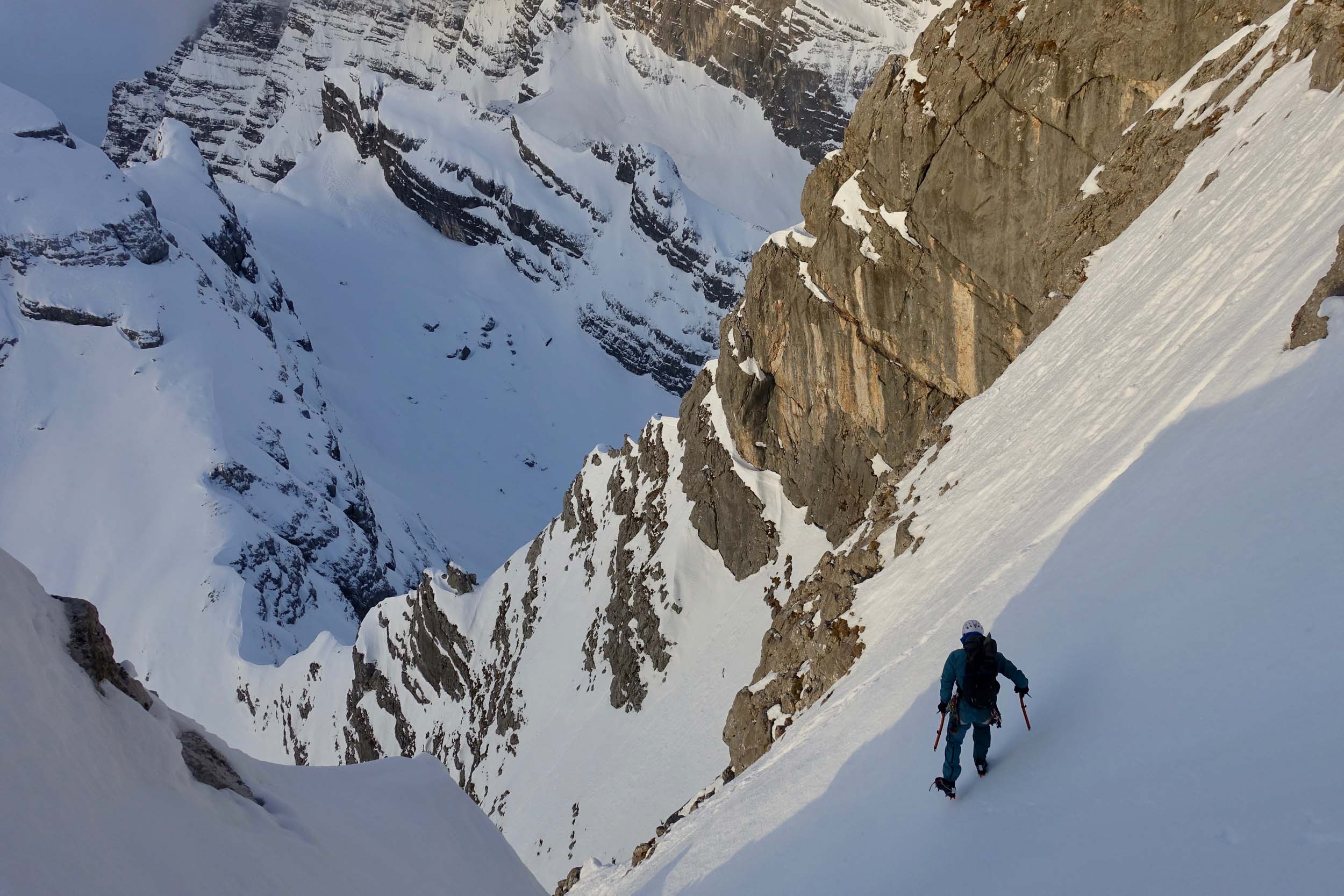 While starting the climb in the dark up the north-east ridge of Kleine Watzmann we still didn’t know which line exactly we would take later in the day. Because we didn’t find any info from previous parties who had climbed parts of this traverse in winter.

We reached the summit of Kleine Watzmann at 7:30 in the morning and immediately started descending over the south ridge. We managed to descend it by down climbing and one 30m rappel we did from the piton we placed.

From there on we continued with traversing all of the five Watzman Kids mostly in the easier terrain where we moved unroped. On the way we needed to make several rappels and traverse some very exposed snowy ridges. We needed to place all of the anchors for the rappels.

During the descent from fifth child we decided to try to climb to Watzamnn Mittelspitze directly from the ridge as the more lower angled Wieder route looked to dangerous with sliding snow. 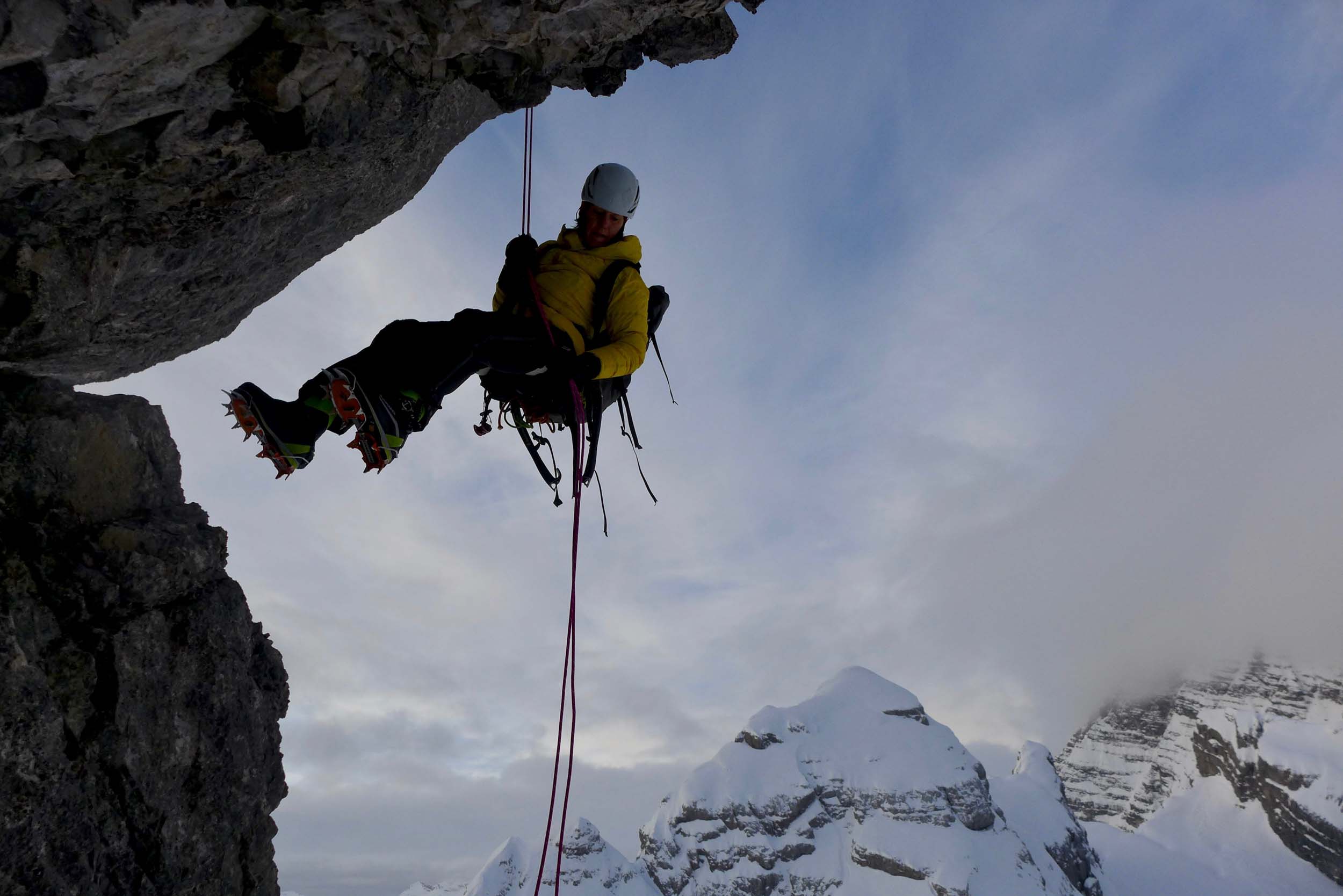 Ines Papert during the only rappel we did from Kleine Watzmann.

We reached the Skischarte at 14:30 and made an hour long brake to melt snow for soup and coffee.

At 15:30 we started climbing up towards Mittelspitze. For the first three pitches we still climbed in the day light. From there one we climbed in the dark. After 7 more pitches of terrain with difficulties up to M5 and steep snow up to 80° we reached the highest point of Watzmann. Wetraversed the ridge to Hocheck and descended via the normal route to Watzmann House and further to our car. 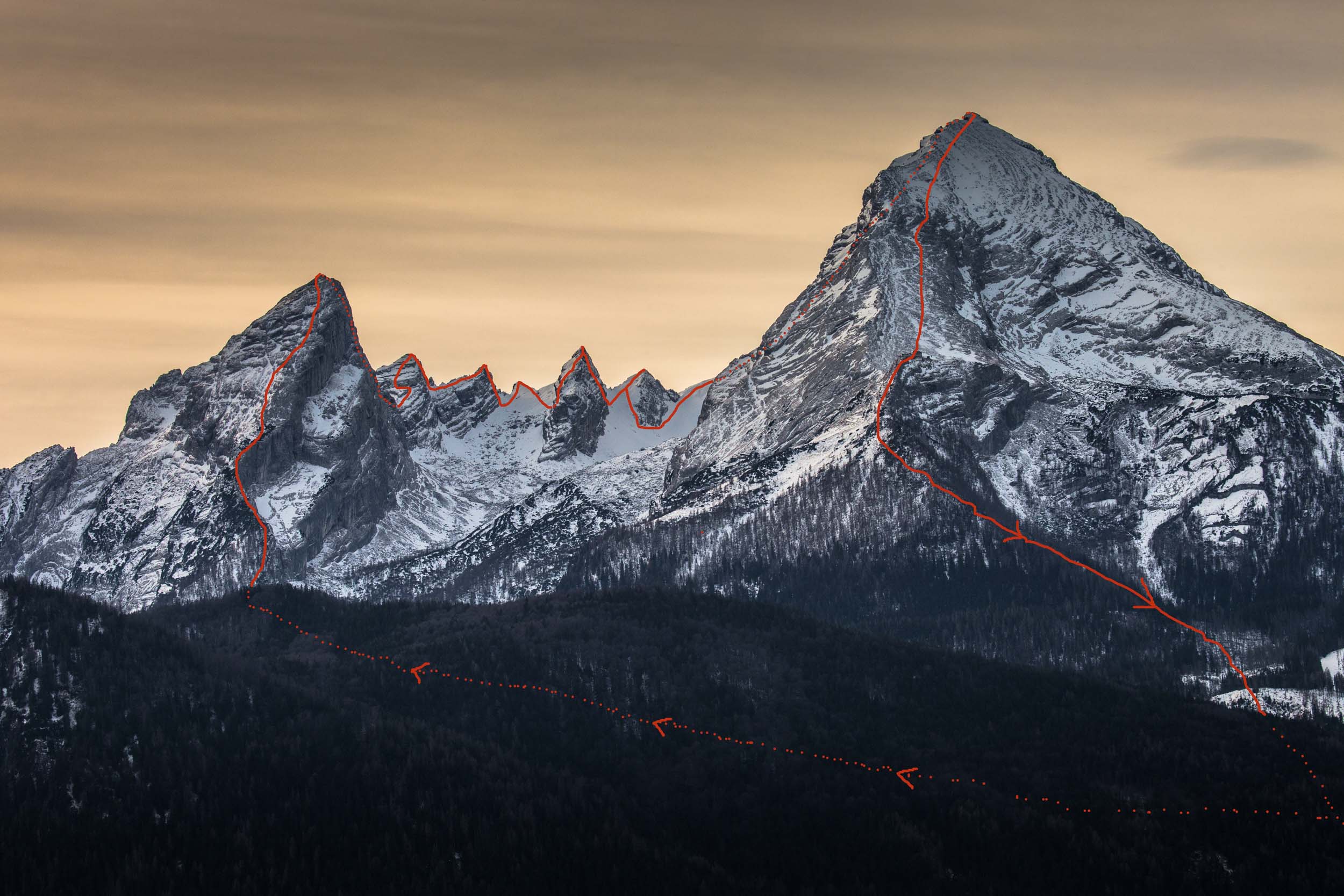 “When Luka asked me if the entire traverse had been done in winter I replied that I have never heard about it. He almost could not believe that this had not been done on the most iconic mountain of the country, so close to my home. It was enough of an answer for the game in his mind to start to play.“

“I am still relatively new to the Berchtesgaden area but as a Slovenian alpine climber I definitely know the history of Watzmann that was written in 1800, by Slovenian Valentin Stanič, who did the first ascent of it. When you look from Berchtesgaden to the Watzmann group it shapes a perfect skyline with logical start and finish. When I saw it for the first time a year ago I knew I wanted to try to climb it one day. Since the main summit is very busy in summer it was clear that winter would be the right time to get the proper experience of the mountain. Till now we still couldn’t find any info that the Watzmann Family traverse had been done in winter. I almost can’t believe that the most obvious line on the most iconic mountain in a country has not already been done in winter. In Slovenia this would not be possible. On the other hand I was able to see how little activity there is in those mountains in winter and this makes the surprise smaller. I am spending lots of time now in Berchtesgaden area and I am honestly very happy there are so few people climbing in the mountains in the winter. I am looking forward to exploring more of these incredible mountains.”