In May 2021, our small team of four climbed Mount Logan for the purpose of doing science on its highest reaches. We skied the King Trench route to the summit, waved hello to the Pacific Ocean from the top, and ticked off our high-altitude scientific objectives on the summit plateau before skiing back down to the oxygenated world. As for the science, we completed a radar survey by ski across the summit plateau, which will allow us to locate the ideal ice coring location for next year, and installed North America’s highest weather station on the ever-windy PR Col.

At 5959m, Mount Logan is Canada’s highest peak. On our team of four, two of us had climbed it before for the sheer adventure of it. This time, we were climbing Logan to work on its highest reaches. We spent two weeks in Whitehorse before launching to the heart of the St. Elias, largely obsessing over the radar and weather station equipment we would be using on the summit plateau. 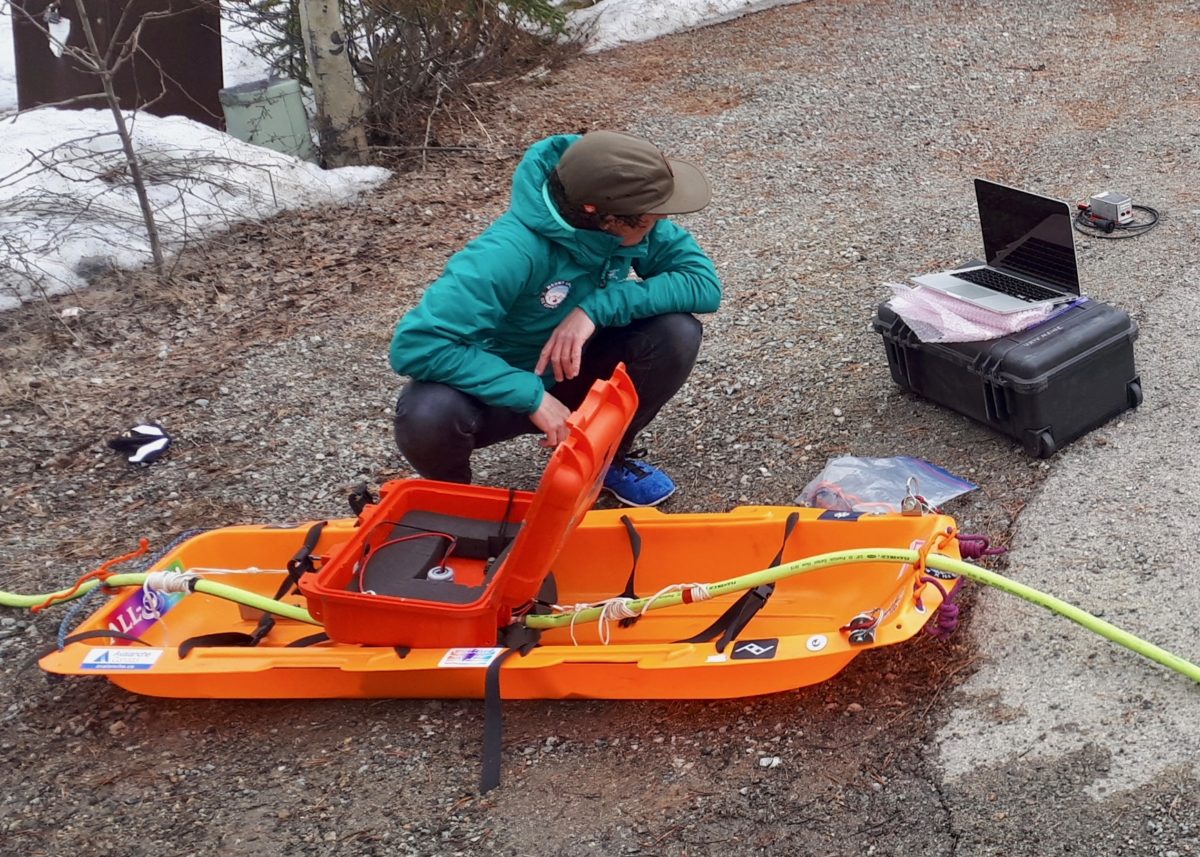 Alison on the line with her UMaine colleagues doing a dry-run setup of the ice radar system in Whitehorse. Photo: Rebecca Haspel.

We flew into base camp on the Quintino Sella Glacier late on May 5, moving in a heavy single carry the next morning to C1. Bright skies and high spirits at our C1, the day after flying in to base camp. Photo: Alison Criscitiello.

From C1, we double-carried our way up the mountain, assuring we all were acclimatized well as we’d be spending some time on the summit plateau completing our work before being able to descend. Carry and drop a load high, ski and sleep low. Move up. Repeat. 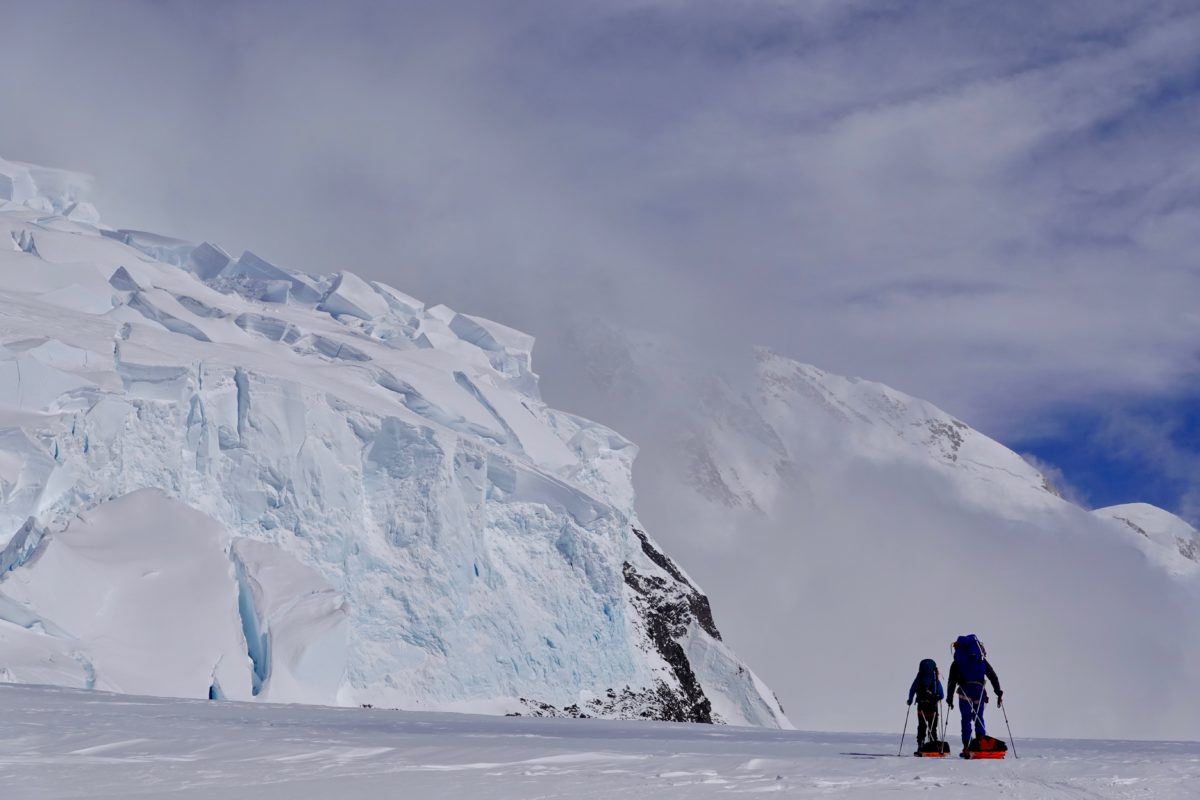 Toby and Zac shuttling a load to C2, with the first glimpses of King Col Icefall coming into view. Photo: Alison Criscitiello.

Negotiating King Col Icefall on this unusually low snowfall year was the crux. We threaded our way under seracs, over breath-holding snow bridges, and I sighed with relief as we weaved through the final icefall section and crested onto the flats above. 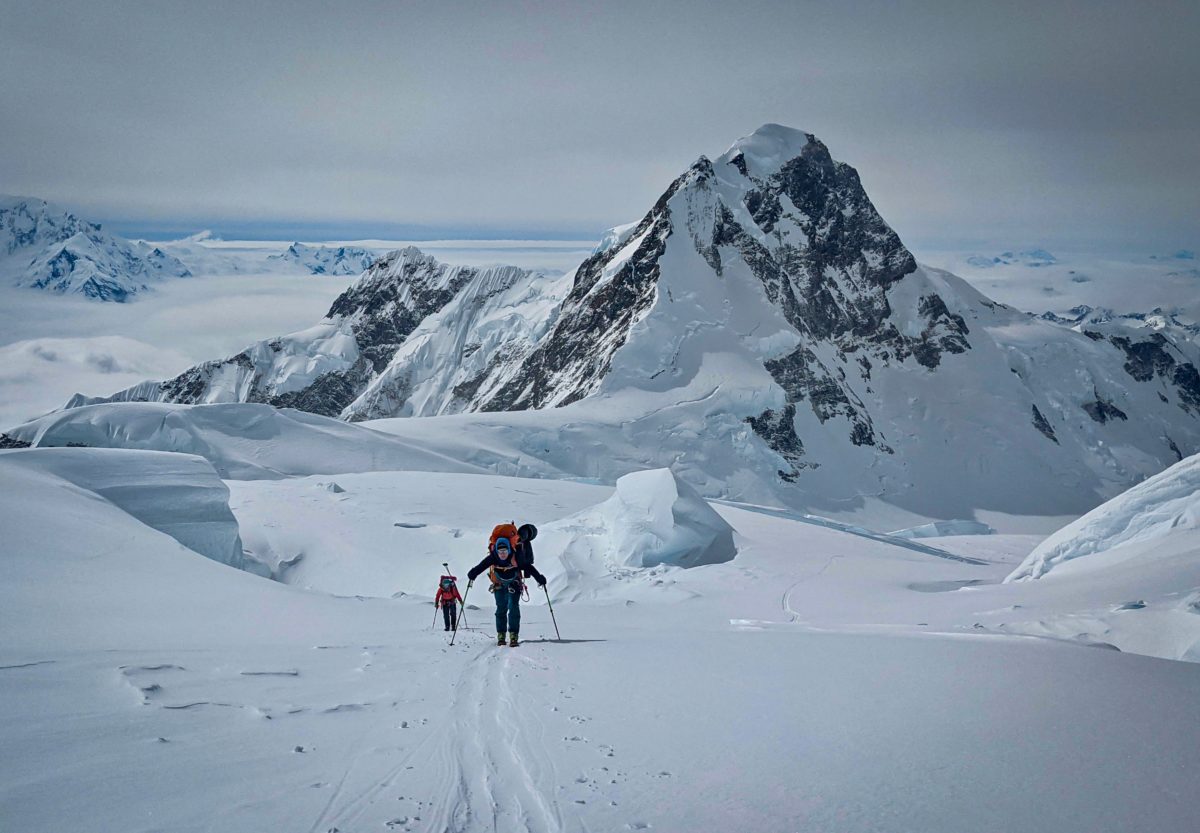 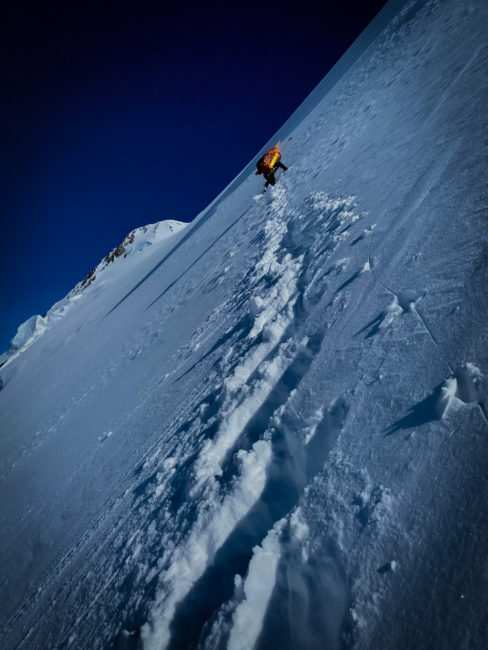 Rebecca plowing skyward on a carry to their high C3. Photo: Alison Criscitiello.

It can sometimes be harder on the move day, when you already know the terrain that lies above from the carry the day before. Until we topped out above King Col Icefall on our move to C3, I was unable to think about much else – all the complicated logistics and work to get done up high. For now, navigating the icefall was our world. 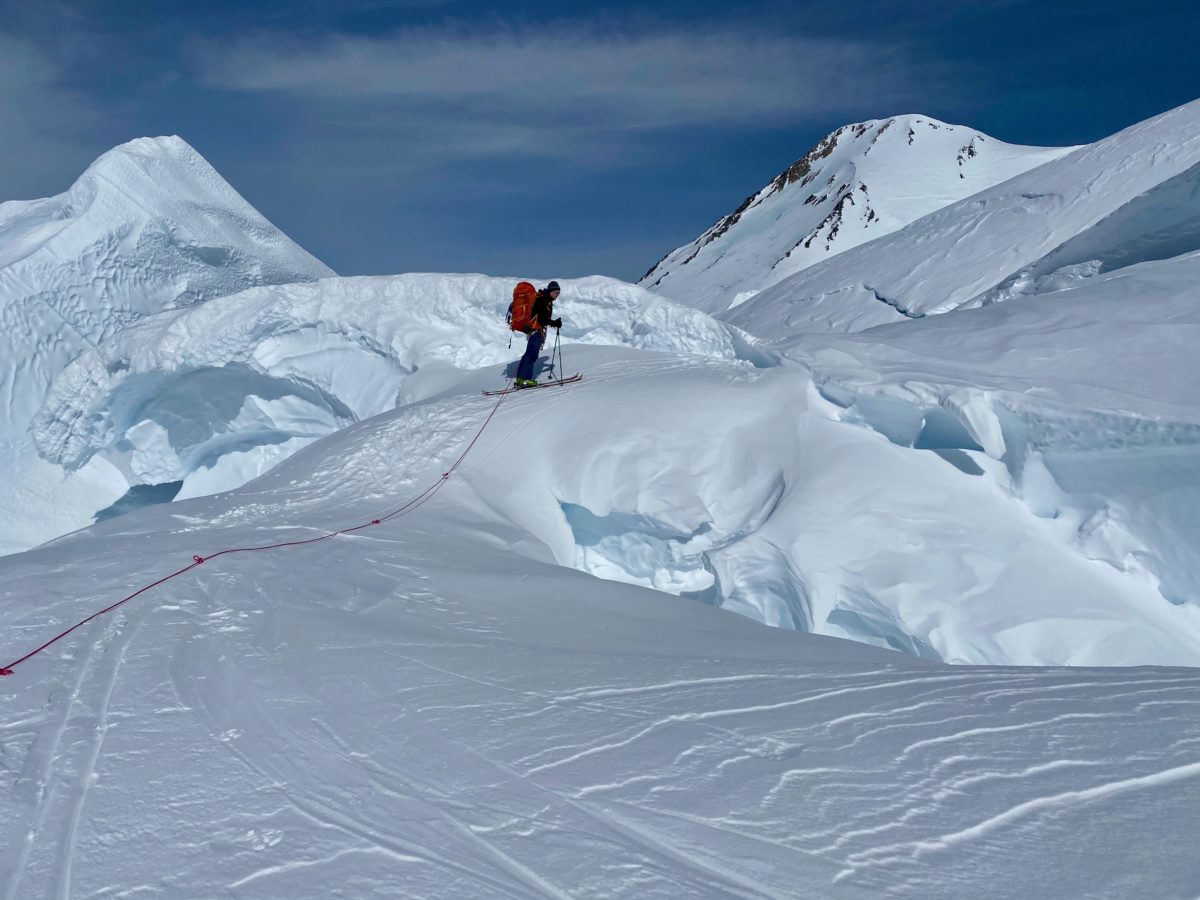 I have found over and again that in the business of high-altitude mountaineering, success + fun come down to one thing at their combined heart: the perfect team. 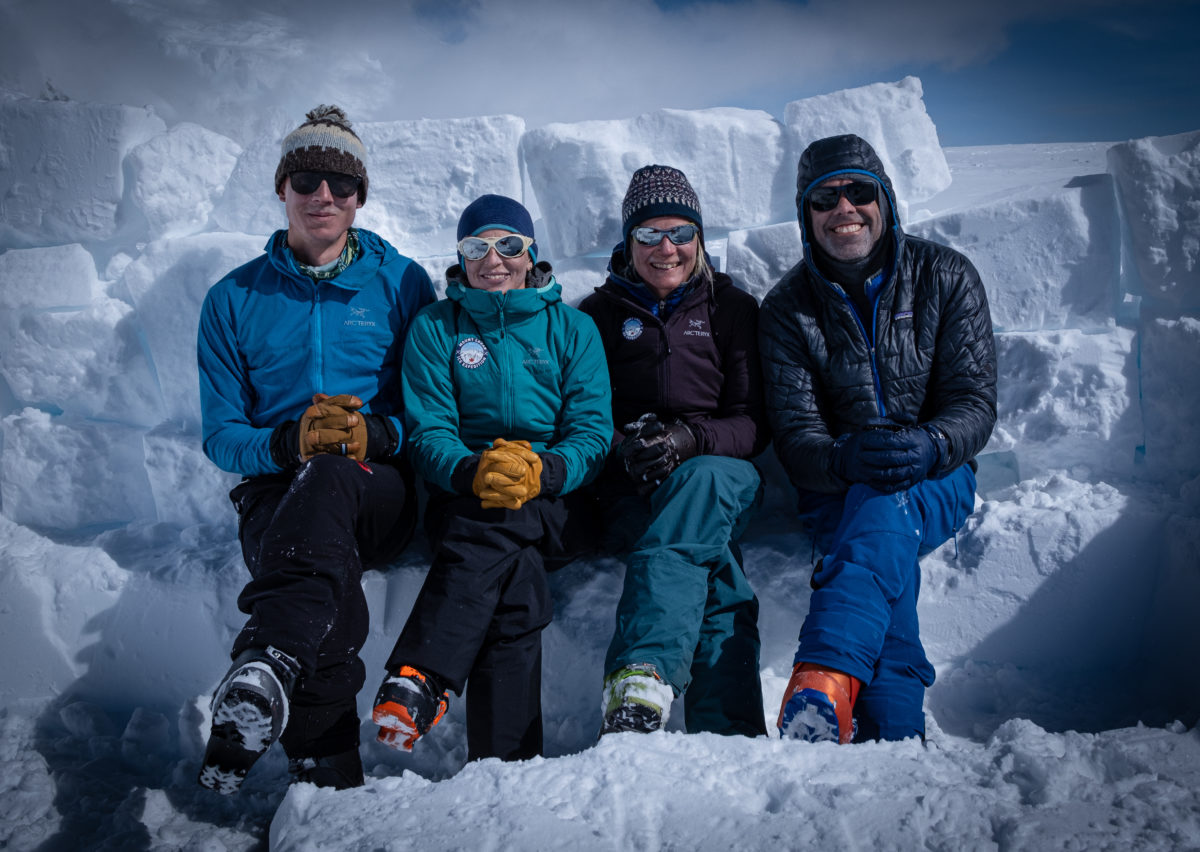 From our high C3, we skied over PR Col and down to the summit plateau in one long day to our high camp, nestled near Russell and Prospector Peaks. On PR Col, I called the pilot who would be dropping our radar equipment on the summit plateau by helicopter. We got lucky with good weather when we needed it most, and the science heli drop (and pickup a couple days later) happened without a hitch! 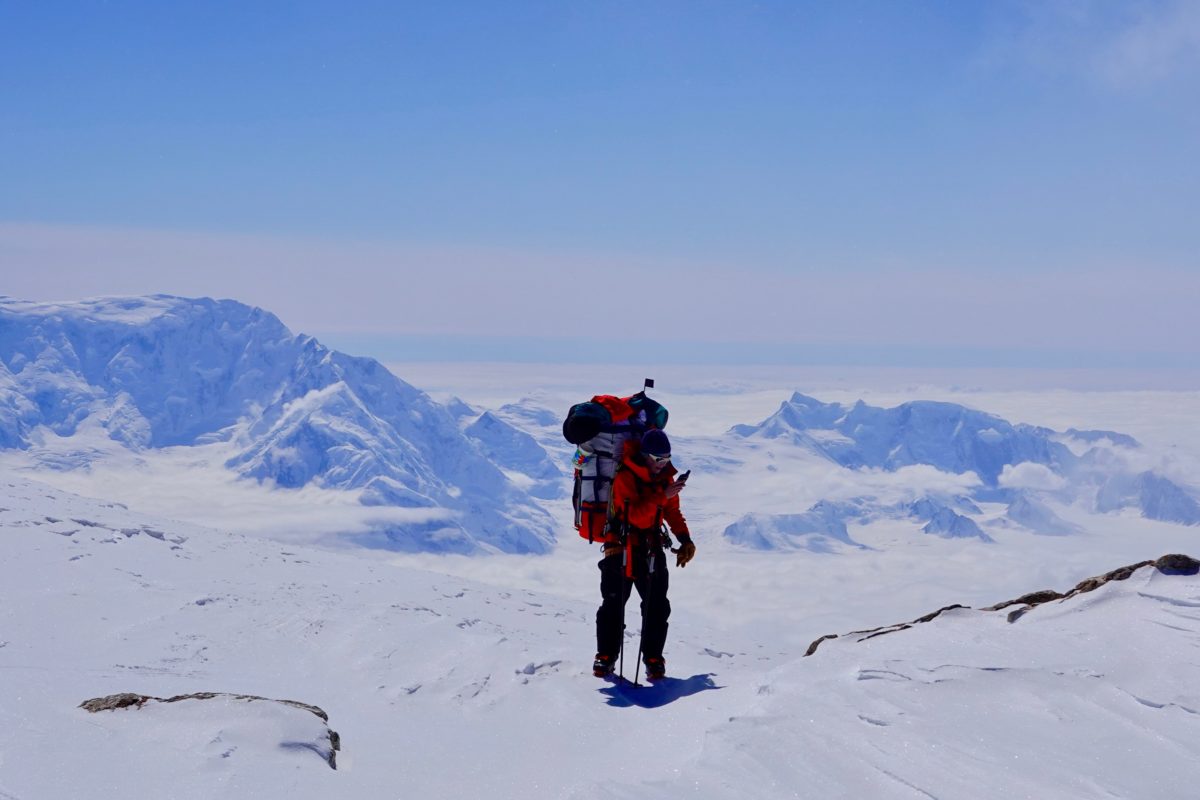 Alison on PR Col, communicating with the helicopter pilot who was one hour out with the radar equipment, to be dropped on the summit plateau. Photo: Rebecca Haspel. 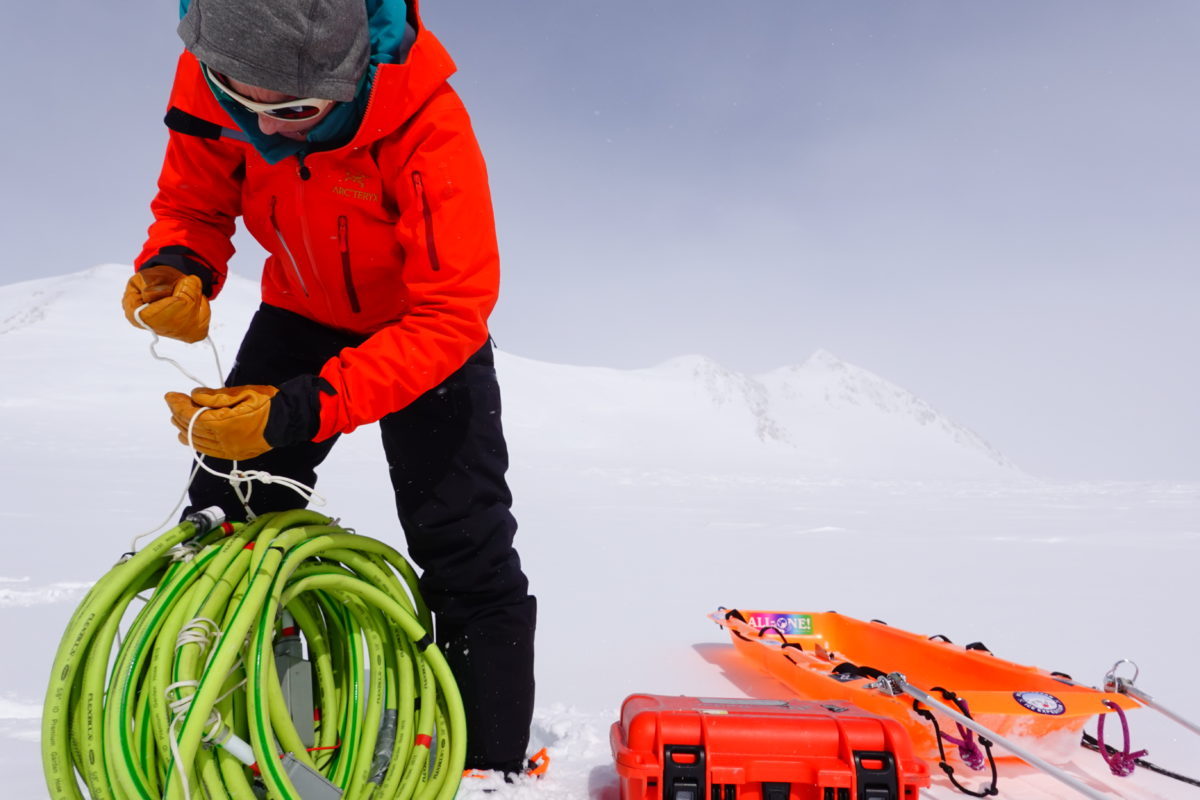 Unusual equipment on Logan’s summit plateau! The ice radar system utilizes a hose to connect the transmitter and receiver units that get dragged across the snow surface behind the skier. Photo: Rebecca Haspel. 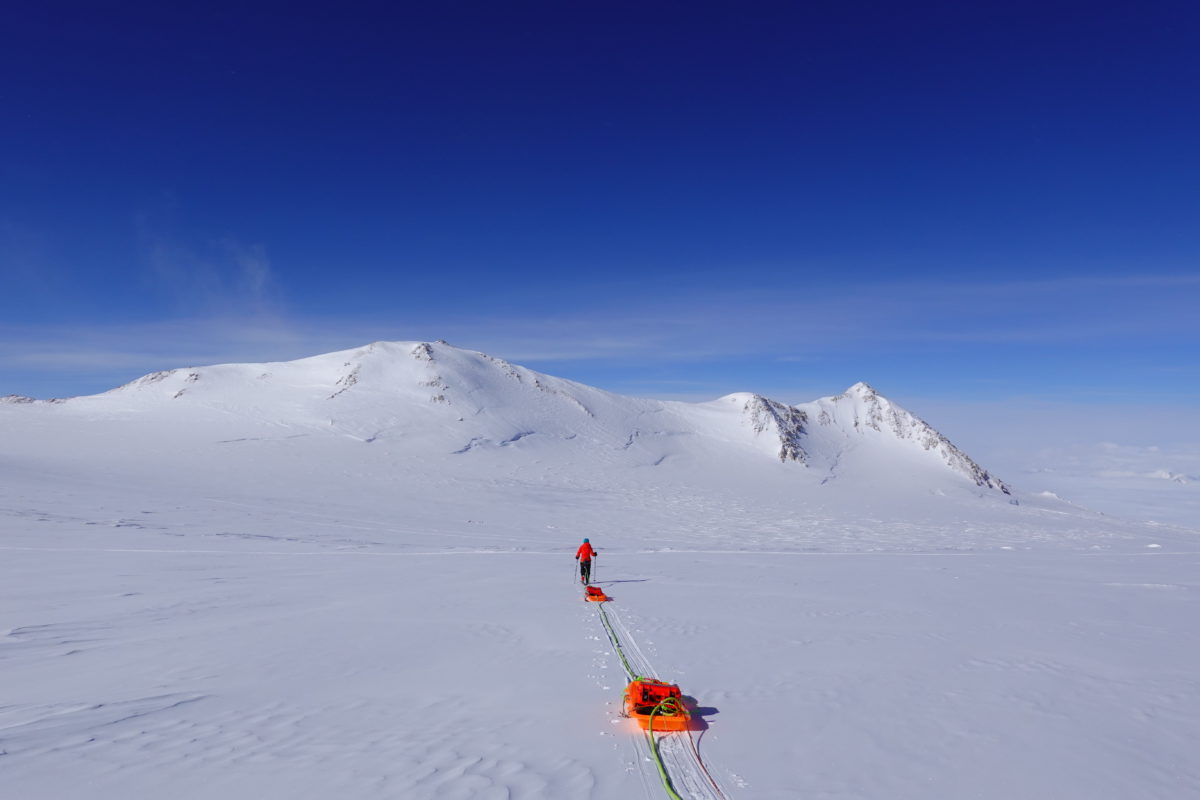 Once the radar survey was complete, we decided to go for the summit. The two parts of this expedition – the ski-mountaineering adventure and the science – were melding into one. 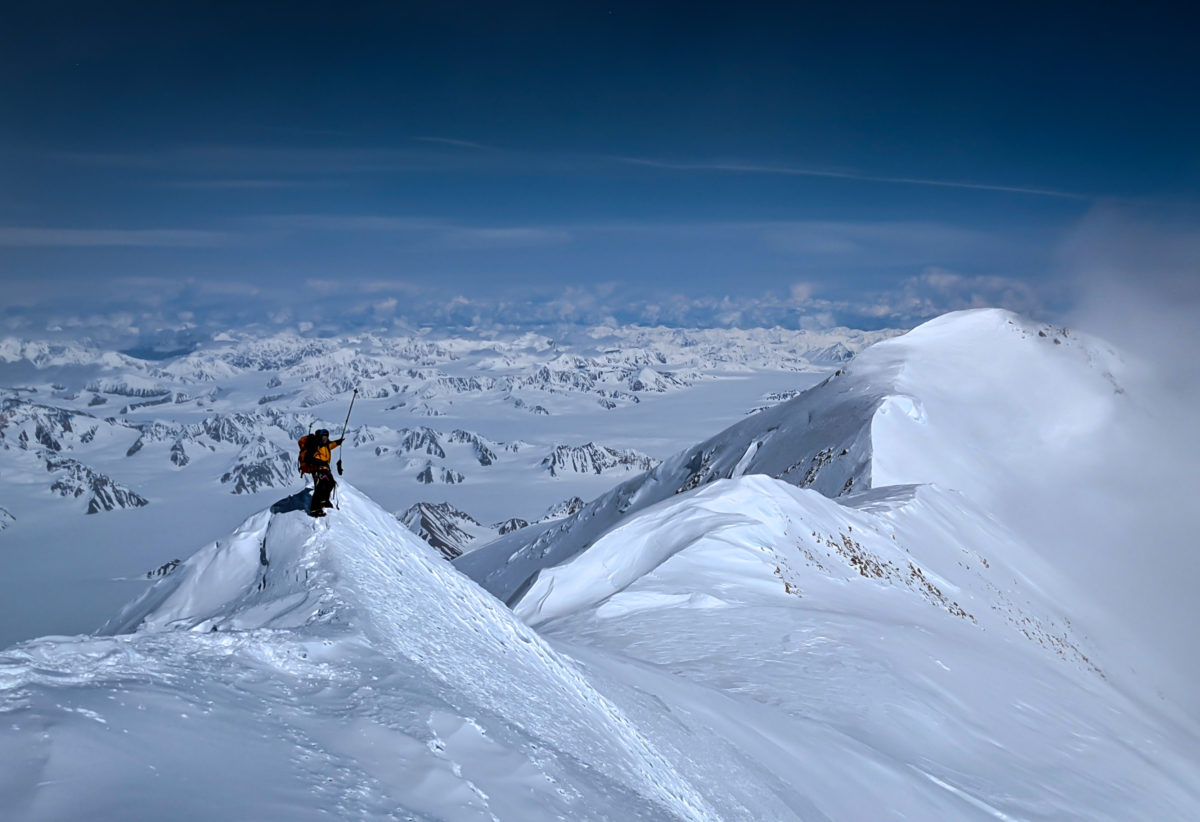 Rebecca high on Logan on their summit day. From the top of Logan you can see the Pacific Ocean, and like a dream you can see the swirling piedmont of the Malaspina Glacier in Alaska. Photo: Alison Criscitiello. 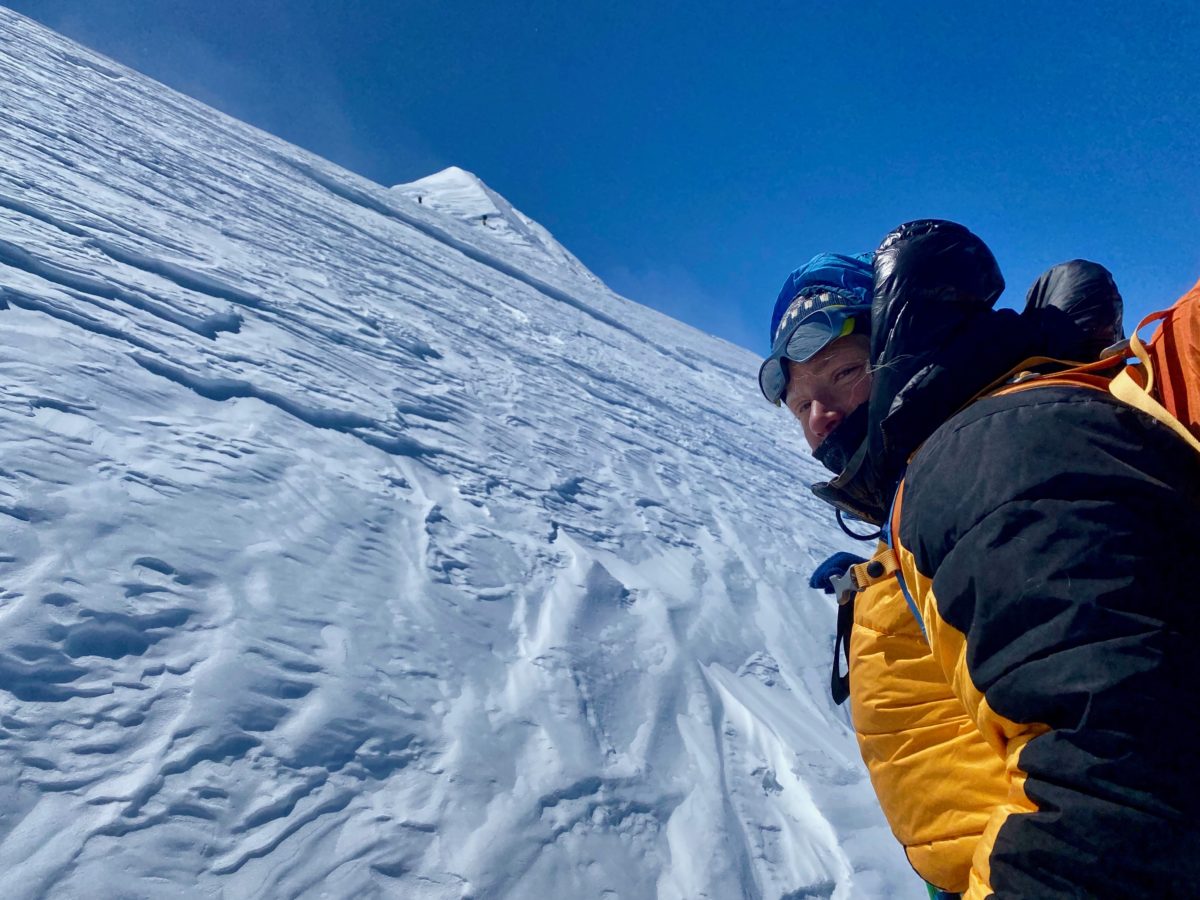 Rebecca at the base of the final summit ridge. Zac and Toby seen making their way above, where they set up two GNSS receivers to measure the summit height. Photo: Alison Criscitiello.

I remembered in detail standing on this same ridge, in this exact same spot, just a couple years before. It was different the last time. I was there for climbing’s sake. To push myself. This time I was there to accomplish something – something much larger than my own personal goals. And, I was there with one of the most important people in my world. To stand in that spot with a sister – in all ways but by blood – was impactful beyond words. 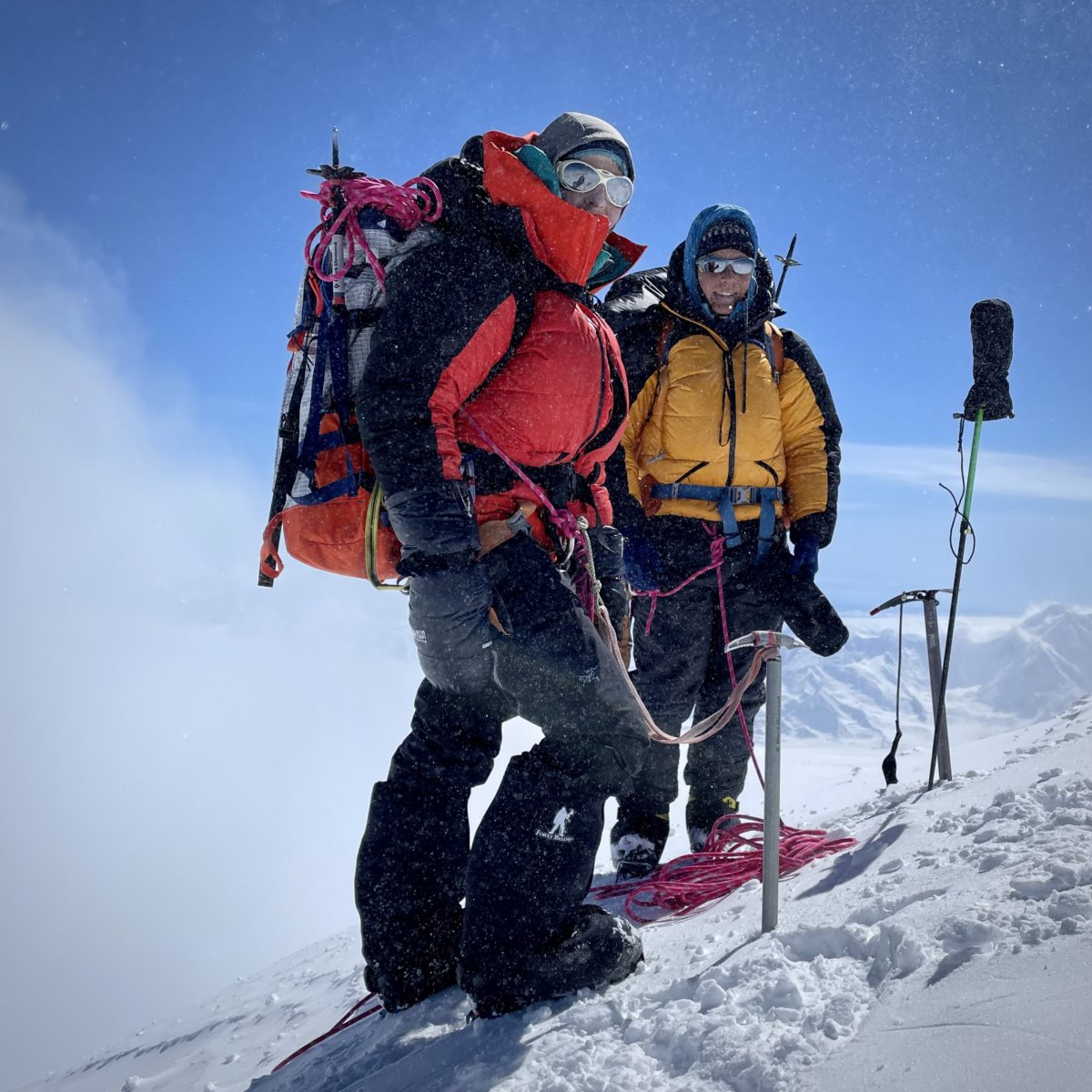 Our summit day was 13 blissful, frigid hours tent-to-tent, which included some waiting at the top for the receivers to gather data. The next morning, we skied back to PR Col to install a weather station as the helicopter came in to pick up the radar load. At 5644m, this is the highest weather station in North America. (Real-time data publicly available here: www.hydrometcloud.com/MountLogan/) 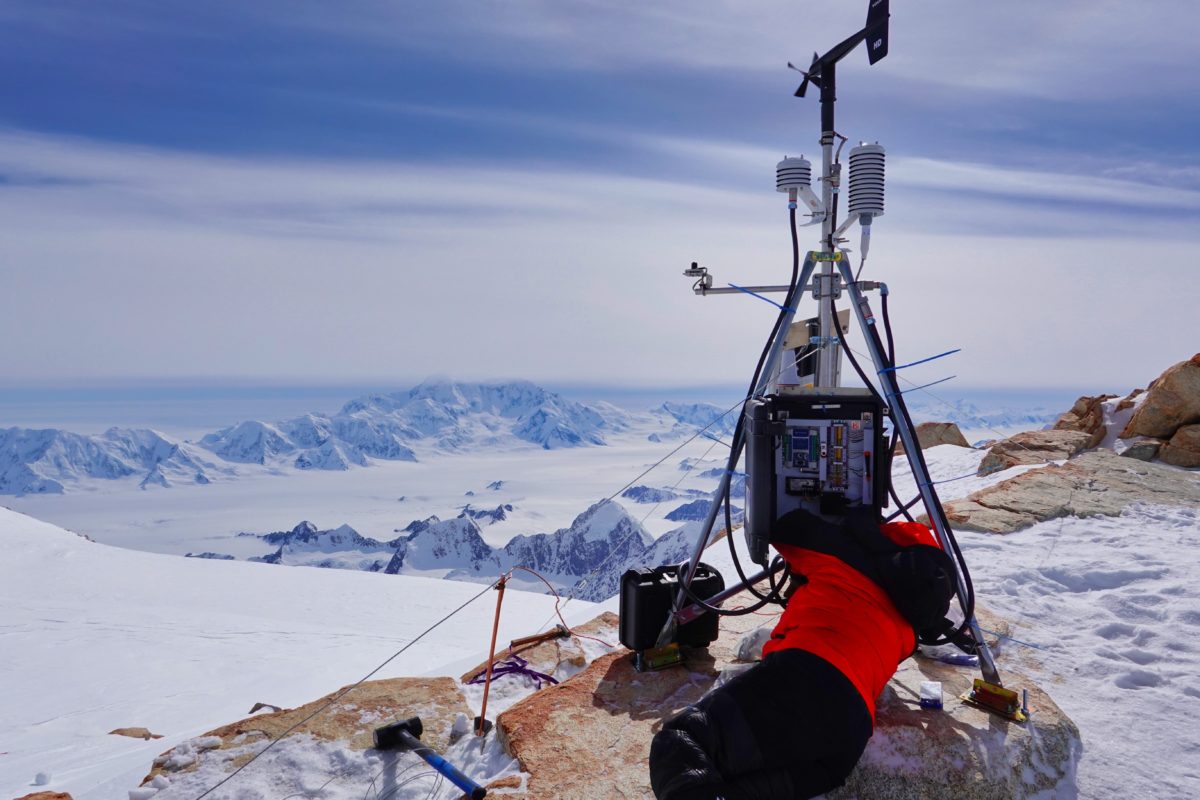 The team installing a weather station on PR Col, including bolting it to bedrock with six 1/2” bolts. Hard to know if it will be able to withstand the intense winds that rip through the col! Photo: Rebecca Haspel.

Down down down we skied with heavy packs and sleds after the weather station install, with all work ticked off. Sweet relief.

Descending for the last time (this year at least!) through King Col Icefall on our quick ski off Logan. Photo: Alison Criscitiello.

As luck would (not) have it, we ended up waiting at base camp for flyable weather out of the icefields for a few days. Enough time to catch up on some reading, sleep, eat everything left in sight, and think about our return next year when we ascend this beast again to drill a surface to bedrock ice core up on that frosty, inhospitable summit plateau. 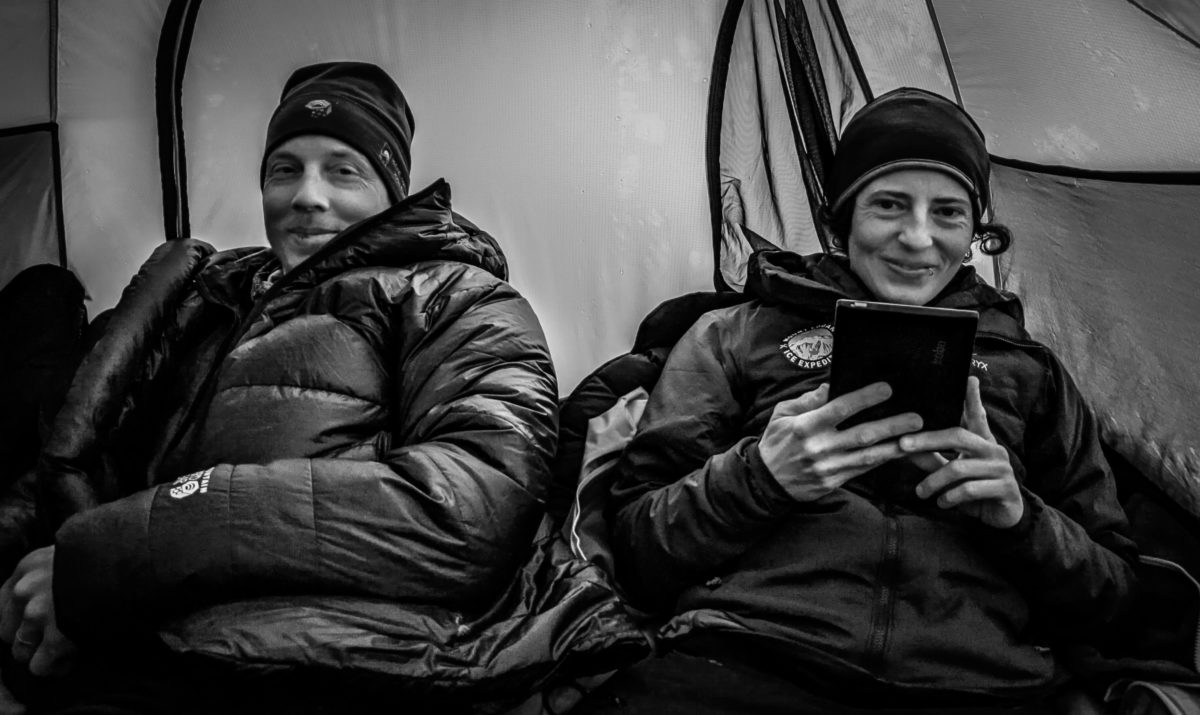 Toby and Alison R&R-ing as we waited for flyable weather out of base camp and back to the green world. Photo: Zac Robinson.