Words by Arc’teryx Athlete Will Stanhope | Photos by SparkShop

“When I was eighteen I landed a job as a “Nature Guide” at the Capilano Suspension Bridge. It was the most relaxing summer job I’ve ever had. While my other friends were tediously perched on a ladder painting houses or straining with a wheel-barrow load of gravel, my job was simply to saunter around the park in an old-fashioned fisherman’s outfit, pointing out the hemlocks and cedars to the tourists. On my down time I’d hide underneath the swinging bridge, eat ice cream and stare at the swirling green water of Capilano River and daydream about rock climbing.

I’d also acquired my very first car- a maroon, rust-pocked, early-80s Toyota Celica with sporty headlights that slowly rose like the eyes of an alligator in a swamp when I turned the key. One of the headlights didn’t quite rise the whole way up so it looked like she had a permanently lazy eye. I’d dubbed her the “One-eyed Monster” and had forked over 400 loonies for her- an astronomical sum of money for me at the time. Looking back, she only had a couple months to live before my best buddy Jason drove her off the road in Deep Cove through a thicket of stout little trees on his first driving lesson in Deep Cove, ripping her undercarriage to pieces and totalling her completely. But, for an idyllic two months I had a set of wheels, mornings off, and the cushiest job in North Vancouver. Perfect.

At the time Jason and I were just starting to sink our teeth into Squamish’s trad routes. We held routes like The Northern Lights, University Wall and The Daily Planet at mythical status: big, hard, soaring lines on the Chief that, at the time, didn’t get climbed very often and were held in high regard. Armed with a mismatched collection of cams and nuts, Jason and I would blast up the Sea to Sky Highway in the predawn hours in the One-Eyed Monster, Jack Johnson on the CD player, to do battle with Squamish’s hard classics. Inevitably, we would get very scared and very pumped on the laser-cut dihedrals and cracks. After climbing I’d frantically pin it down the road for a chalk-splattered, bug-eyed return to the Capilano Suspension Bridge and a quick costume change to the fisherman’s outfit.

One day we found ourselves underneath the Daily Planet, a perfectly cleaved 150 foot dihedral on the Sheriff’s Badge. Though only graded 5.12a, this route was rumoured to be fierce. Even the name- The Daily Planet- was a reference to the newspaper where Superman worked. With Jason patiently paying out slack, I cautiously stemmed and jammed my way up “The Planet”, as the local hardmen and women called it. Things started off alright- I could stand on decent edges for my feet and managed to place a fair bit of gear. Then, things got steeper and more strenuous. I remember staring down a particularly burly section of thin laybacking, with my gear well below my feet. This kind of climbing, I thought, was the kind I had read so much about! Squamish legends like Peter Croft and Perry Beckham would waltz up this stuff, and I was damn well gonna try to as well! 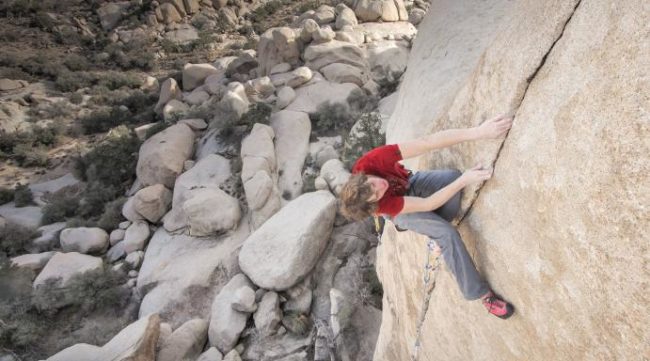 The following moves are etched into my mind. I remember scrambling for finger jams, peering down between my legs and seeing the distant piece of protection, trying to stuff in another cam, only to find it was too big, trying to shake out my arms, and forging ahead, hell-bent on getting to the anchor. My world shrunk down to the only the most imperative things: the slick, crystalline footholds underneath me, the feel of the bone-white granite, and the surging desire to push on. I arrived at the anchor doused in chalk and sweat, tired to the core, and buzzing from the tips of my fingers to my toes.

I’ve since found that moments like that come only a handful of times a year. The vibes have to be just right, and the line needs to call to me. If those stars align, once-in-a-blue-moon all the superfluous junk in my head is briefly stripped away and all that’s left is the present moment: the faint echo of my partner’s encouragement, the gear on my harness, the rock at my fingertips and what’s inside me. The more I climb, the more I find the feeling of success fleeting but those brief moments of pure focus are indelible. 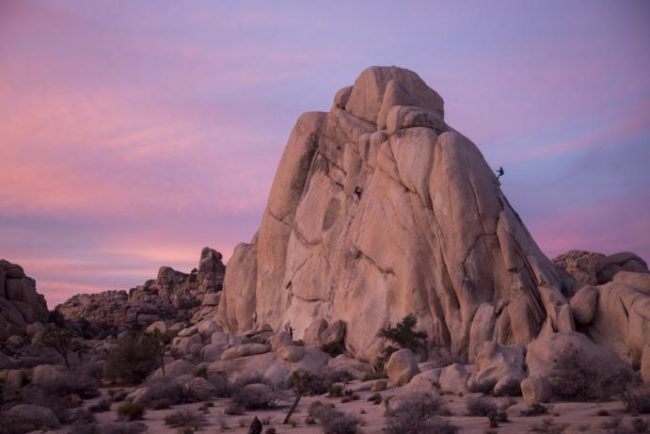 I just got back from a trip to Joshua Tree with friend Matt Segal. We were there ostensibly to send a few lines that we’d read and heard about for years and to do some filming for EpicTV. But for me at least, the trip wasn’t about ticking hard pitches so much as it was a chance to swill a couple watery Mexican beers with my buddies around the campfire and spend time climbing in an alien, otherworldly landscape. When Bob Dylan talks about “the haunted, frightened trees” in his song Mr. Tambourine Man, I always picture Joshua Trees: trees with limbs askew at crazy angles scattered throughout the huge expanse of the barren Mojave Desert.

We set our sights on an old Hidetaka Suzuki crack testpiece called “Stingray”, a steep, right-leaning crack on the backside of the obscure Iguana dome in the Wonderland of Rocks. Suzuki, Japanese crack ninja, roamed the United States in the eighties and nineties, amassing a huge ticklist of very difficult finger cracks. I’m sure most of those testpieces of yesteryear are gathering cobwebs, relics of an age when cracks were king and sport climbing had yet to gather momentum. But, for a select-few crack devotees, these forgotten routes are like diamonds in the rough: beautiful, pure, singular pitches that you can find by snooping around in dog-eared old Climbing Magazines and querying older climbers.

Matt and I set to work. The climb consists of some footless finger-jamming to start off with; the kind of climbing where you just need to grit your teeth and pounce to the next jam. Afterwards, the crack leans to the right and you are constantly dropping tiny cams underneath your hands as to not clog the next jam. Near the top, the climbing is balancy and insecure, with miniature, gravelly footholds that you must trust completely. On our first lead attempts, Matt and I both pitched off a move away from the tippy-top- too pumped to move and therefore ejected backwards, wincing and hoping that the cams stayed put in the slightly granular stone. Thankfully, the cams held tight for both of us.

After a few days rest to heal skin we were back underneath Stingray. This time Matt was up first, and sent it smoothly with steely-eyed focus. What I like about Matt most as a partner is his ability to switch, in a minute, from lighthearted-jokester to seasoned rock crusher. He can take climbing seriously, but also with a grain of salt, at the same time. We jive well in this regard; we work hard when we need to but also realize that it’s just climbing, unimportant in the grand scheme of things. A ticklist of pitches doesn’t mean much. It’s the memories with good friends that matter most. 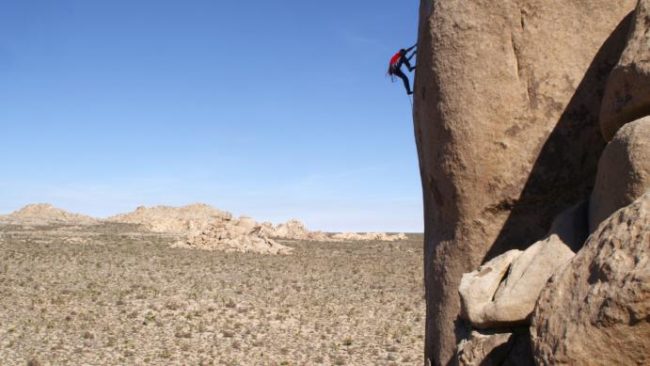 With that in mind I started up the crack, aiming, as the old adage goes, to appreciate the whole experience and not just want to be done with it. Before I knew it I was at the final rest before the tenuous last moves. I shook out my arms and arranged the cams just right. At that point I switched from relatively secure straight-in jamming to pawing gravelly slopers and stretching for off-balance underclings. I could literally spit to the top of the dome but it was this tricky top section that had pitched us off before, and this section where I needed to “drop into my own head”, as Colorado rock legend (and Matt’s trad climbing mentor) Eric Decaria once put it.

My world came into stark focus: left foot scummed in the crack, right foot pasted, as Peter Croft once wrote, “on the dinkiest of dinky-doink”, fighting the barn-door, and summoning everything in me to scrap my way over top of the Iguana dome. This time I made it. On top, gazing out at the endless granite monzonite domes dotting the desert, and buzzing from the tips of my fingers to the tips of my toes, I couldn’t stop grinning. I’d found that old, precious head space once again. And I already can’t wait to find it again.”