Asking what women want to wear on the ski hill sparks a collaboration between lead designers across two different divisions, and lets two talented designers shine a light on the performance value of feeling phenomenal. Introducing the new Incendia capsule.

There is an old story about how woman came to be in the world involving mud and spit and a lonely man and a spare rib bone. In Braiding Sweetgrass, scientist Robin Wall Kimmerer remembers another story, Skywoman Falling. A woman falling out of the Skyworld finds safe landing on the back of a turtle. Wild creatures bring her mud to build an earth with and she reciprocates with the gift of fruits and seeds she brought with her. In this way, they form Turtle Island together.

In another story of beginnings, two friends sit on a chairlift at Whistler Blackcomb during Opening Week, and because this is what they do, they look at what people are wearing. They look at what other women are wearing as they’re ripping the first lines under the chairlift. 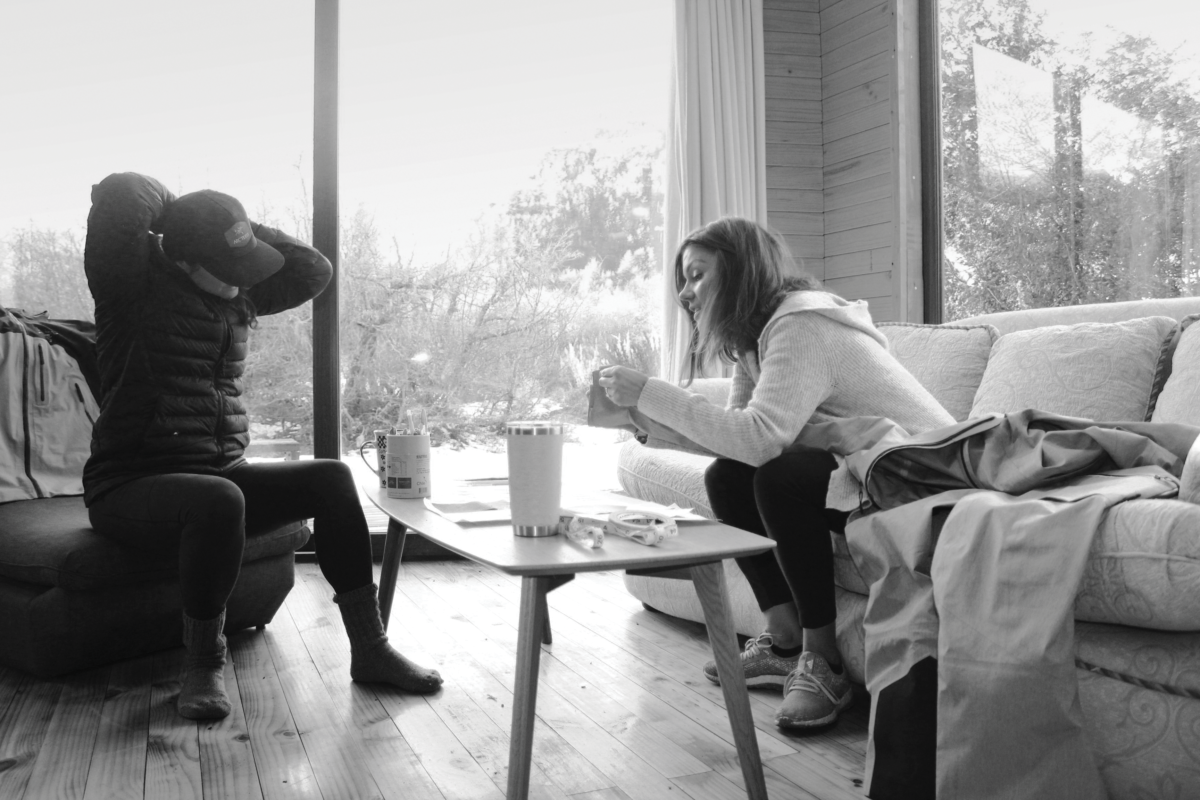 And they don’t love what they see.

They want to make it better.

That is what they do.

They’re going to do it together.

Sarah Wallace, Designer Manager for Ski and Snowboard, says there has always been a fire in her wanting an outlet. It found healthy expression in University when she discovered snowboarding and traded two planks for one. Acknowledging that a law career was never going to light her up, she faced the parental blow-back of shifting track and enrolled in a degree in design. “I was determined to make it work,” Wallace says, acknowledging the stubborn streak that proved justified when she landed at Arc’teryx ten years ago.

She’d been at Arc’teryx for almost two years when Edita Hadravska was brought on to lead the Everyday Design team. Hadravska had grown up ski-racing in the Czech Republic, had practiced as a mergers and acquisitions lawyer for two years before heading to design school in Montreal. She’d designed her way around the world—Saigon, Prague and Zurich—before saying hell yes to British Columbia’s Coast Mountains as a permanent backyard.

The two became instant friends. “We have the same kind of sarcastic humour,” says Hadravska. “We both have a very low tolerance for bullshit,” says Wallace. Each loves the mountains with equal fervour—they pitched together to rent a room in Whistler one winter, so they could ski every weekend.

“Skiing is entrenched in my heart,” says Hadravska. “It’s the only sport in my life where I feel like I’m flying, completely free and empowered.”

To stoke her inner flame through British Columbia’s snowless summers, Wallace chases inspiration south to the tiny town of Las Trancas in Chile, where wild storms constantly blow down the slopes of ancient volcanoes. “I feel so fired up and energized there.” Their own itch, and that opening week chairlift chat, gave birth to a self-assigned brief: to create something women want. “It was what we were missing on the mountain,” says Hadravska. Everyone on the hill seemed to be outfitted the same way. “There was nothing we could see that was both cool-looking and functional.” And the silhouettes were definitely not crafted with women in mind.

“We started to think there might be a way to come up with a concept that would not compromise on performance, but also be stylish and attractive,” says Wallace. Something that looked cool and wasn’t overtly technical in its identity or expression, but that performed to the same level. That wasn’t purple, pink or nipped in at the waist.

“It was very organic. We knew exactly what we wanted, and we wanted it really badly for a long time,” says Hadravska.

What Wallace and Hadravska were seeing at play on the hill was the result of a “pink it and shrink it mentality” that still lingers in many parts of the outdoor and action sports industry—the idea that the most solid place to start with any product offering is with a male consumer, and once it’s fully developed, you can cater to the other half of the market by simply changing the colour and making it smaller. 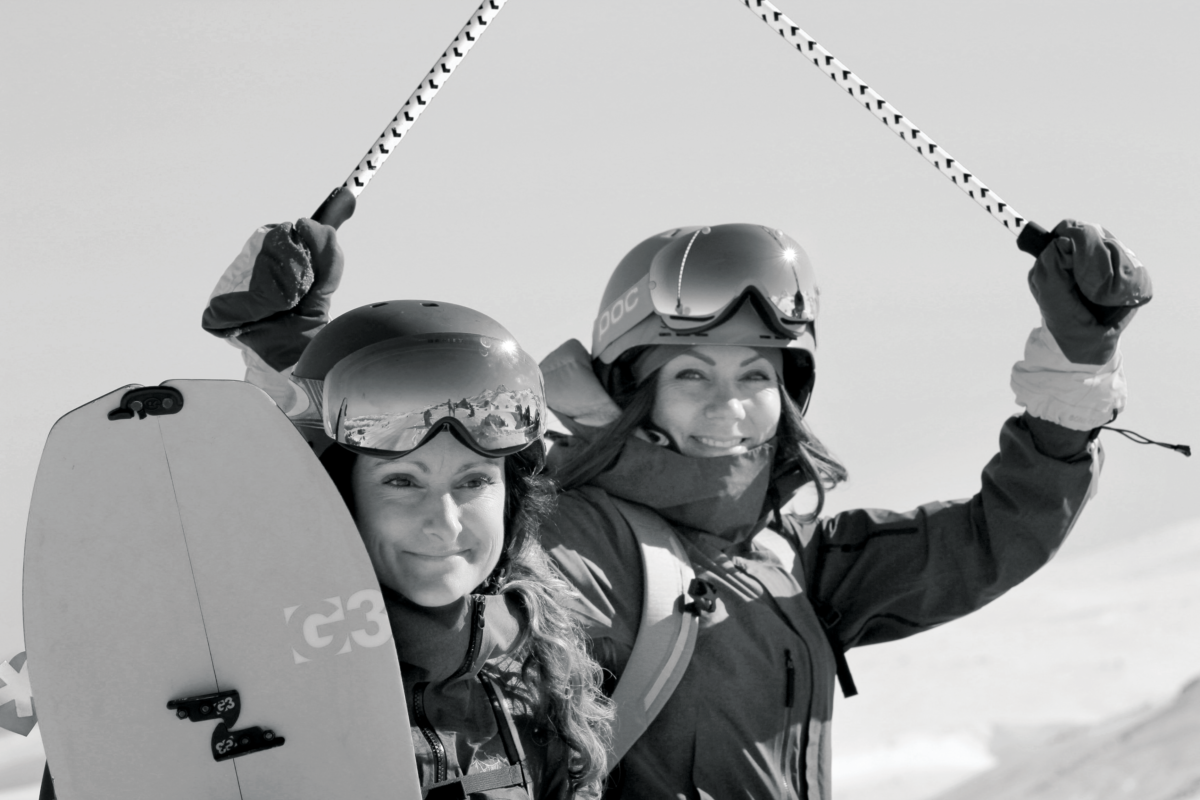 Incendia, the women’s ski capsule that is a result of Hadravska and Wallace’s collaboration, started with a different spark. “We didn’t want to look like dudes when we go skiing and just have it refitted to our bodies. We want something else.”They wanted to feel phenomenal, without forfeiting technical performance in any way. They wanted the laminated zippers and the membrane package that ensures breathability and airflow and waterproofness. But they wanted something else. “I want to look good,” says Hadravska. That makes her feel good. And in that headspace, she can always send.

Wallace reflects, “We don’t really talk about emotion in the culture-at-large. It’s a taboo. It’s considered a weakness. But to me, it’s obvious there is an emotional component to clothing and style. If there weren’t, we would all just be wearing uniforms or burlap bags. We use clothing and style to express who we are—how we identify ourselves, who we identify with, the tribe we’re part of, who we hope to be.

”There wasn’t a precedent for what they were doing. In a world that likes to measure performance metrics and quantifiables, it’s hard to inject feeling. But Wallace is tenacious. “I’ll never give up on anything if I believe in it.”

Hadravska intuitively understands that feeling good is a performance factor. “Racing influenced me: I don’t ever stop halfway.” She’s also motivated by the desire to do a great job, and out of respect to the environment, to design things to last. But since having a daughter, her sense of resolve has become more singular. “I don’t need things for me. It’s for her. I want her to be a good person, I want her to be happy, I want her to be healthy. And I want her to have a healthy planet. I expected my world would change when I had her, but I had no idea how. I knew there was going to be love, but I didn’t understand it would be a completely new definition of love.” And in that space of love, she wants her daughter to know herself through a different lens. Not as a counterpoint to the male. Not as a shrinked and pinked version of the original. But someone fundamentally different and differently fundamental. One expression of the life force, as it expresses itself in billions of different ways. One person free to express herself, on and off the hill, fully, freely, feelingly.

The world she’s been born into isn’t there yet, isn’t consistently asking women: “what do you want?” as the starting point. But Hadravska is. In this way, with Wallace at her side, they’re writing a new origin story.