Mark and Janelle Smiley just returned home from completing the Red Bull Der Lange Weg, a 36 day ski traverse across the European Alps. After a few days spent catching up on sleep, we asked the pair to share some of the highlights and lowlights from their adventure. Read the “his & hers” recaps below.

I just completed the hardest physical challenge of my life; ski touring across the entire Alps Range with my wife, Janelle, and five international athletes on a 36-day blitz called the RedBull Der Lange Weg. The start line was a little town just outside of Vienna, Austria, and the finish line was the city of Nice, France, a mere 1710km (1069 miles) away. The tour required a total of 375 hours of moving, about half of which were spent deep in the pain cave. Inspiration for the tour came from a team of four Austrians who completed the traverse in 1971 in 41 days, and our goal was to beat that time. Additionally, we would try and summit several significant peaks along the way; the highest in Austria, Switzerland, Italy and France to name a few. Our teammates were highly accomplished strangers, the stakes were high, and the terrain was literally foreign to us! All the ingredients for a true adventure.

The first real highlight came on day 11 when we crossed out of Austria and into Italy at the end of another very long day. Right at the border, we found ourselves on a knife-edge rocky ridge with the sun setting and no clear path to the mellow glacier 300 meters below. It was the first time I got to flex my “mountain guiding muscles” and helped the group ski the steep slope with a few rope tricks and anchor building skills. Once on the mellow glacial terrain, we made relaxed turns under the alpine glow of setting sun. It was amazing. 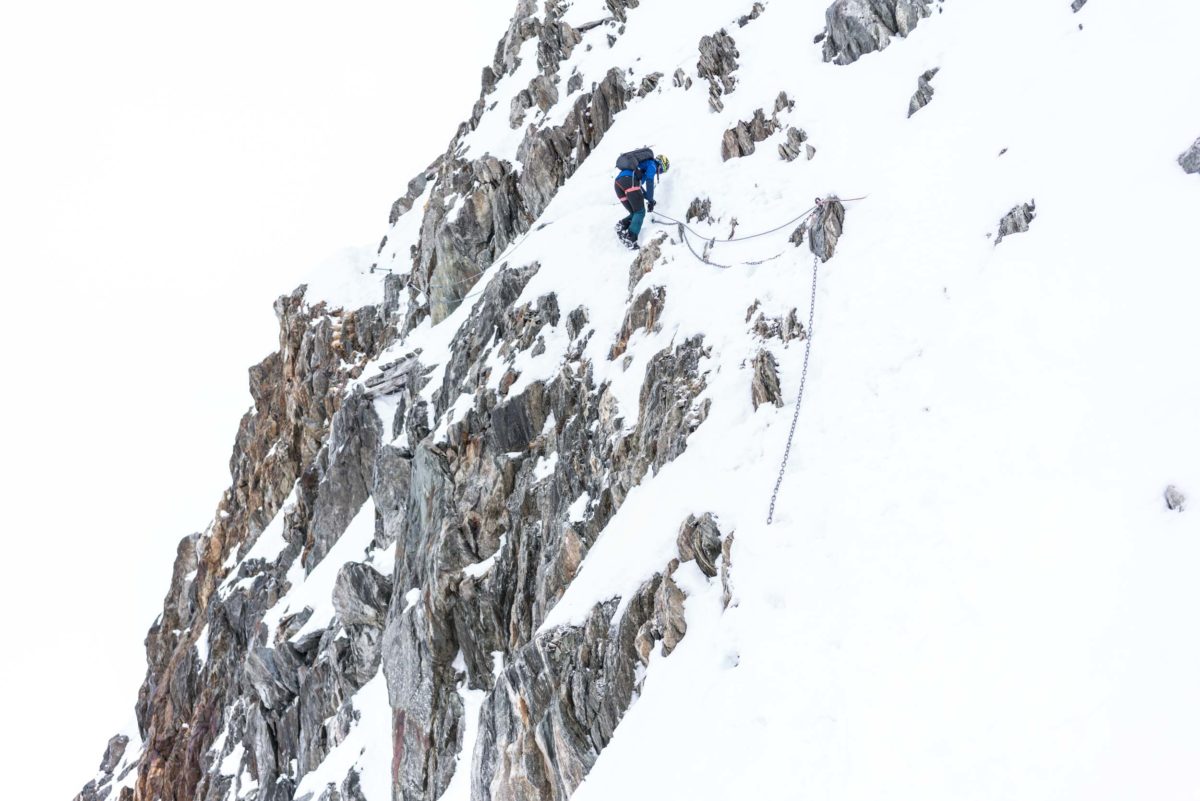 Another highlight was getting to watch Janelle rise to challenge of dealing with the heavy dose of man ego in the group. Not once did she lose her temper or snap at anyone. She is an angel, this I know. I am so proud to be married to the first, and only, woman to ski tour across the Alps. 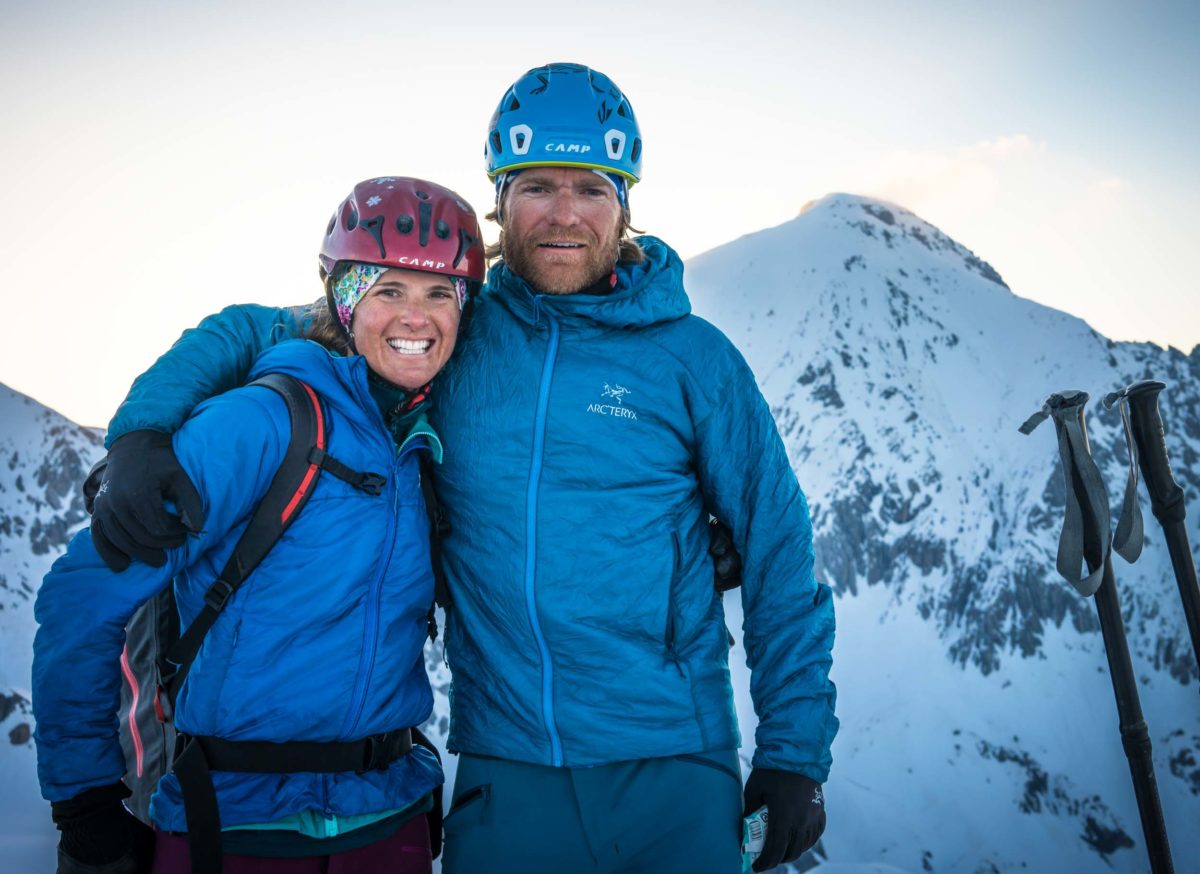 This experience has raised the bar on what I thought was possible. Before, I thought that a 3000+ meter ski tour was a really big deal, now that number is 4500 meters. I thought an 8 hour day in the mountains was pretty good, now that number is 14 hours. My body knows what it feels like to hurt and keep moving. This is a feeling that can’t be taught in a book, it has to be lived. I have lived days upon days of wanting to quit, having good reasons to quit, literally wishing physical harm on myself so I’d have a good reason to quit, but not quitting. The depth of these “life school” lessons are maybe only taught during an undertaking of this magnitude. Taking it one day at a time, one hour at a time, one step at a time. Living in that space where I am just there to do that one thing…move forward. And I did. I kept doing, and kept doing…always moving forward. It got so repetitive that the daily vertical and linear stats stopped mattering as much as they did in the beginning. We would walk until we arrived at our destination, and then maybe walk a little further to “get ahead”. The ever present downside to this process is that it physically hurts… a lot. 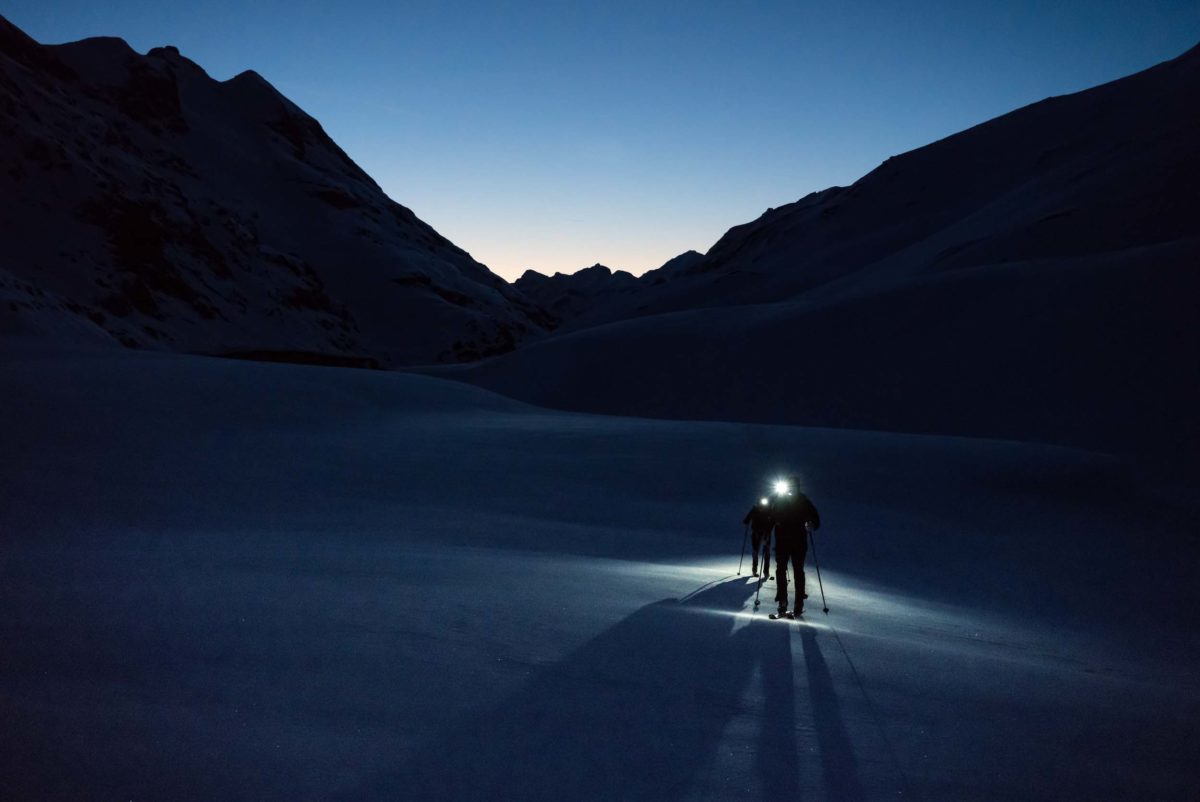 The mornings were the worst. Getting out of bed was a nightmare. I felt like I was 100 years old as I lowered myself down from the RV bed above the driver seat. My face was swollen, my joints hurt, my muscles felt like brick and Janelle was about the same. We would eat breakfast in silence, each with a blank thousand-yard stare, wondering how we would make it another day. 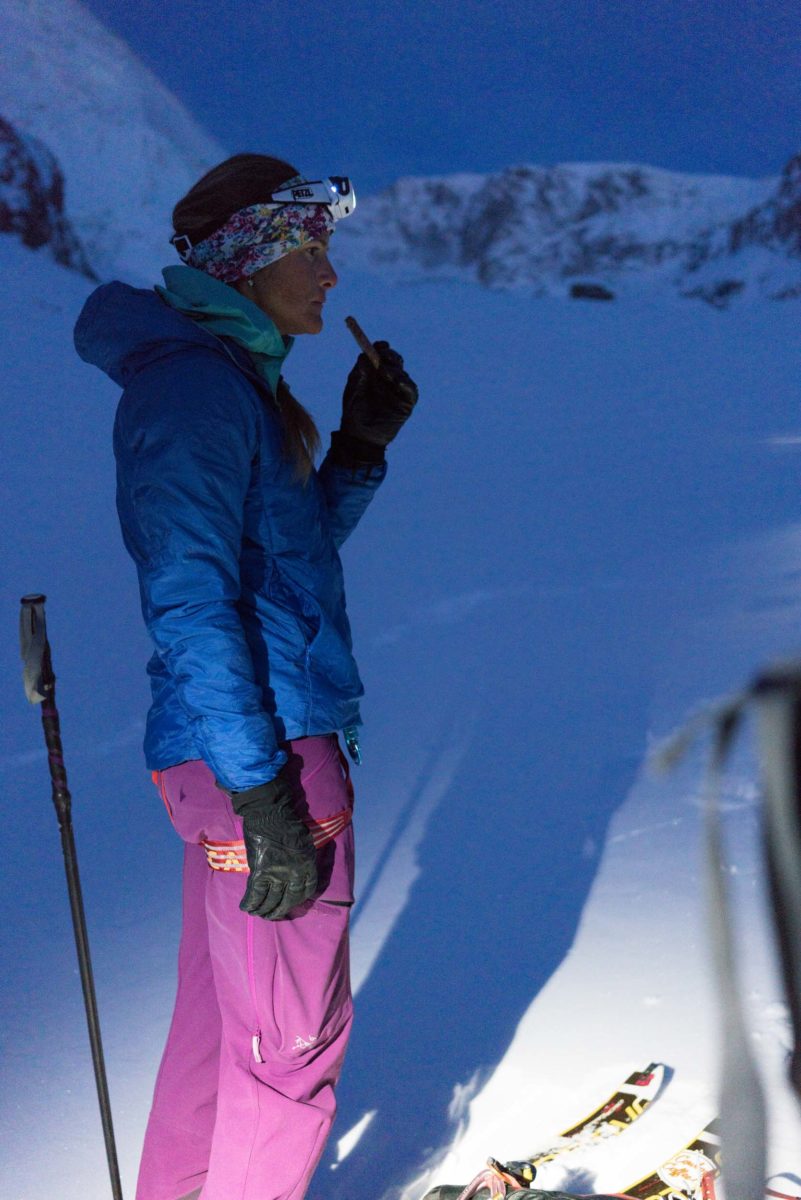 While touring the first 10 days almost all of the route finding discussions were in German. We speak zero German. They made noise to one another while we just stood there like house pets and then one would say, “let’s go,” and we would keep moving…fast. Faster then I thought we should if we were going to last 40 days in a row which had me stressed at the thought of burning out and needing to stop. This concern fell on deaf ears so my options were: rise to the challenge or quit. That decision was a bitter pill to swallow.

Another low was the amount of risk we had to accept to make this traverse possible. It is not good avalanche mitigation practice to have external pressures to justify an action like, “If we don’t ski over this pass, we will have go much further around,” or “Plan B is to turn around and that will not allow us to reach our goal in 40 days,” or “The RVs are already in the next town so we need to get there.” Another challenge was having to onsight this huge amount of terrain. Occasionally we had a local that helped lead the way, but most of the time we were making decisions as they presented themselves using the information at hand to pick the best route possible. Sometimes this worked great and sometimes we made mistakes that put us in danger, forcing us to accept the risk or reroute. When our fatigue level was high, we accepted risk more often. That was just the reality.

The sum total of all this effort eventually brought us, miraculously, to the finish line. The sense of accomplishment I feel is beyond words. And I love that. My internal drive to look at a seemingly impossible challenge and think, “bring it on” is at an all time high. Looking back over the map with our 1000+ mile route line etched across most of the European continent and think, “wow, I did that…amazing.” 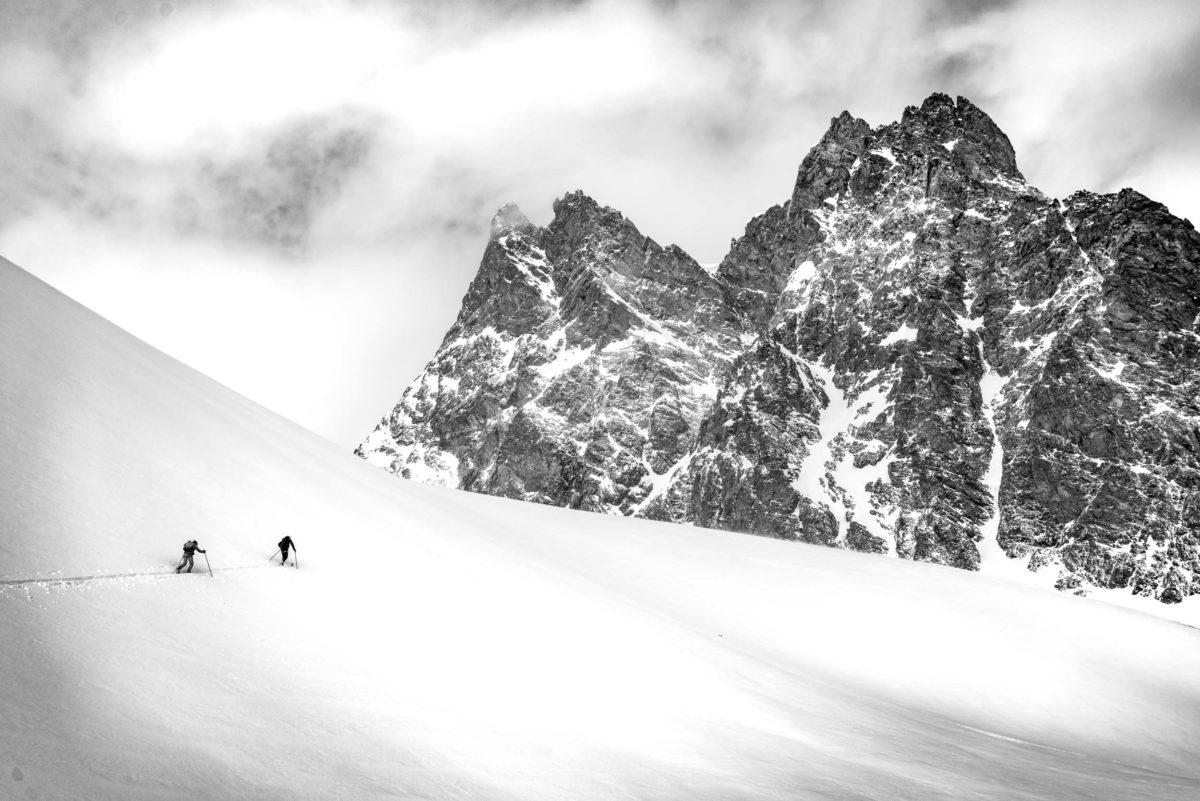 Somewhere in the Alps.

The first week of this adventure was a total whirlwind. Adjusting the the physical workload, the team, and to a constant feeling of not knowing were some of the greatest challenges we faced. We were a team of 7 endurance athletes from different backgrounds and cultures with whom we had only met once for a briefing before the event. We all had different abilities, risk tolerances and experience. Four of the seven team members spoke German, as did the event coordinator and all of the Austrian route helpers which added a greater challenge for us three non-German speaking members of the group.  It is always easier to speak in your native tongue so at the beginning all communications were conducted in German, which led to the most conflicts for the group.

Route planning was the most complicated task so we divided route leading into four sections. The first two route setters came from an elite race background which lead to a race pace start to the traverse. There was no time to pee, no time to get clarity, no time to look over a map, no time for safety, no time to translate the plan. I’m still not sure how we made it through those first few days, it was really hard and it took everything I had not to quit, but some how I kept getting up and going day after day. Thankfully, after the first week we were able to talk as a team and adjust the pace, the language barrier and modes of safety. 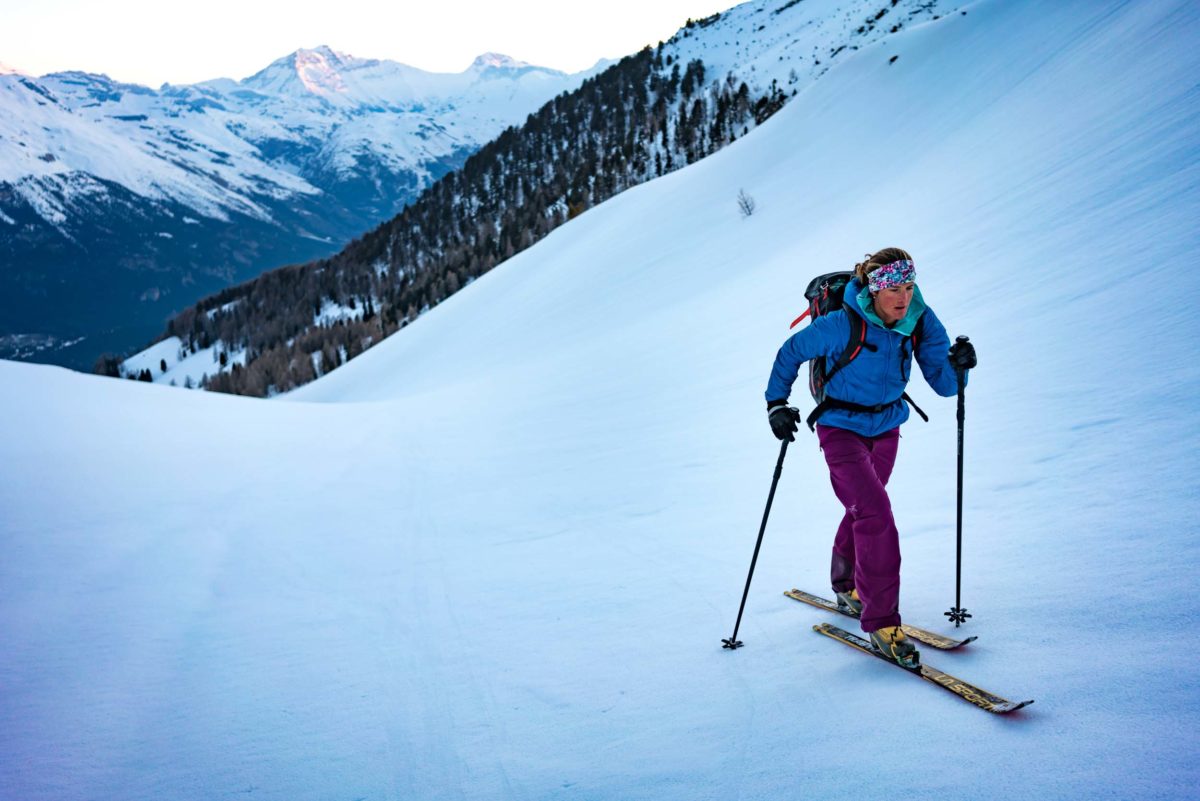 You know when Janelle thinks the pace is too fast, it’s TOO FAST.

Another low came on day 21 – we left Zermatt, Switzerland well before dawn with the finish line being Bourg-Saint-Pierre, basically completing most of the popular Haute route in a day. I had a head cold but my legs were feeling ok, I didn’t have any other option but to keep going as there were no rest days in this traverse. We knew a storm was coming so we were moving fast to try to beat as much of it as we could, but by midday we were traveling through a whiteout with extremely high winds. My sickness was catching up to me and I could start to feel the weakness moving through my body. As we were approaching hour 15 of moving, my legs completely gone, we came upon a “no fall” ski decent on refrozen chunder, I had to pull it together just to survive. It’s amazing how deep you can dig when you feel like you have nothing left. Janelle ski touring through ALL conditions.

The days between the hard ones were a mix of emotions and beautiful moments. When I was able to set aside the dynamics of the team I was able to look up at the mountains and see their beauty, watch the clouds move in and out and swirl around. I felt the wind on my face, it made me feel alive, cold and happily lost. I would get into the rhythm of skinning and hours would travel by with complete tranquility. We skied all conditions, and I mean ALL conditions! We watched the sun rise and the sun set, travelling through the mountains for 10-15 hours a day and barely seeing a soul. We walked through little villages while everyone in them was still asleep, noticing the details of the architecture and the character of each home within each distinct culture. I learned how to push my limits, how to be a team player and how powerful of a tool silence can be. In the mornings I would see mountains off in the distance and by that afternoon I would be standing on those mountains. The distance that we covered each day was remarkable and inspiring. We toured through valleys, cols, over mountain tops, and along ridges. We walked by castles, through vineyards, along canals and on roads. Oh and the amount of calories we needed to consume was awesome. I could eat whatever I wanted and as much as I wanted. Two or three items from a bakery, no problem. I call it the Alps Traverse eat everything weigh loss program.

The one beautiful moment that stands out most is when I came over the last snow covered mountain and saw the ocean for the first time. I was alone for this moment before the others arrived and there was a combination of peace, satisfaction, joy, and disbelief that all blurred together within me. I was truly happy, we did it! I was honestly unsure if I could finish this traverse and that is what made it a true adventure and made that moment of completion so much richer. 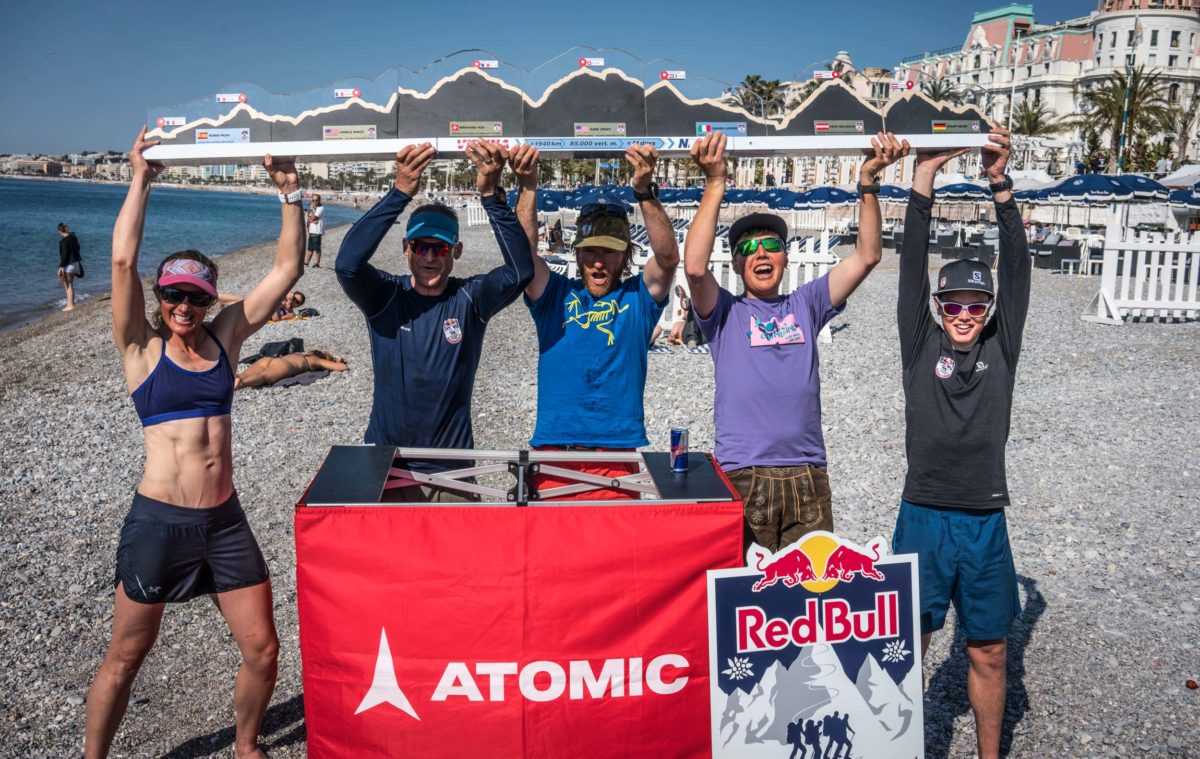 The finish line in Nice, France.