“I’m here to help you become the boss that I know you are” said Elaina Arenz, one of our course instructors on the evening before the pilot American Mountain Guide Association’s All Women’s Single Pitch Instructor (SPI) course. When I looked around the room, I saw a group of strong, intelligent and qualified women, their faces filled with excitement and perhaps a tinge of nervousness. For the very first time this fall, the SPI course was being offered with all female instructors and all female participants. This pilot program was the end result of ten months of planning by Flash Foxy (a women’s organization that I founded in 2014), Brown Girls Climb, the American Mountain Guide Association (AMGA) and the American Alpine Club. 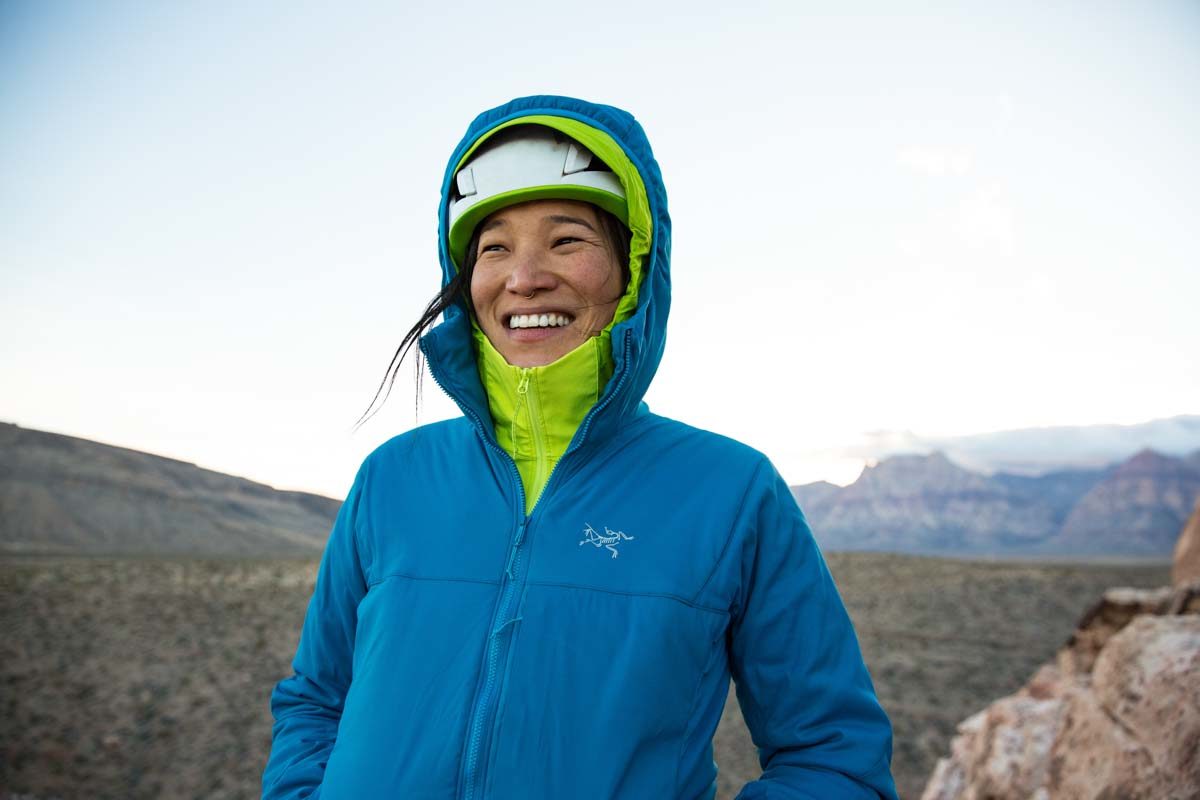 There is so much power in women teaching women. It helps to reinforce the idea that we, as women, can be the experts, the decision makers and the teachers in the outdoors. So many women learn to climb from male partners and, whether intentional or not, they can begin to rely on men to make the final decisions or take the hard pitches. In an all-female climbing dynamic, the realization that we have what it takes to make smart, safe decisions in the outdoors is amplified. 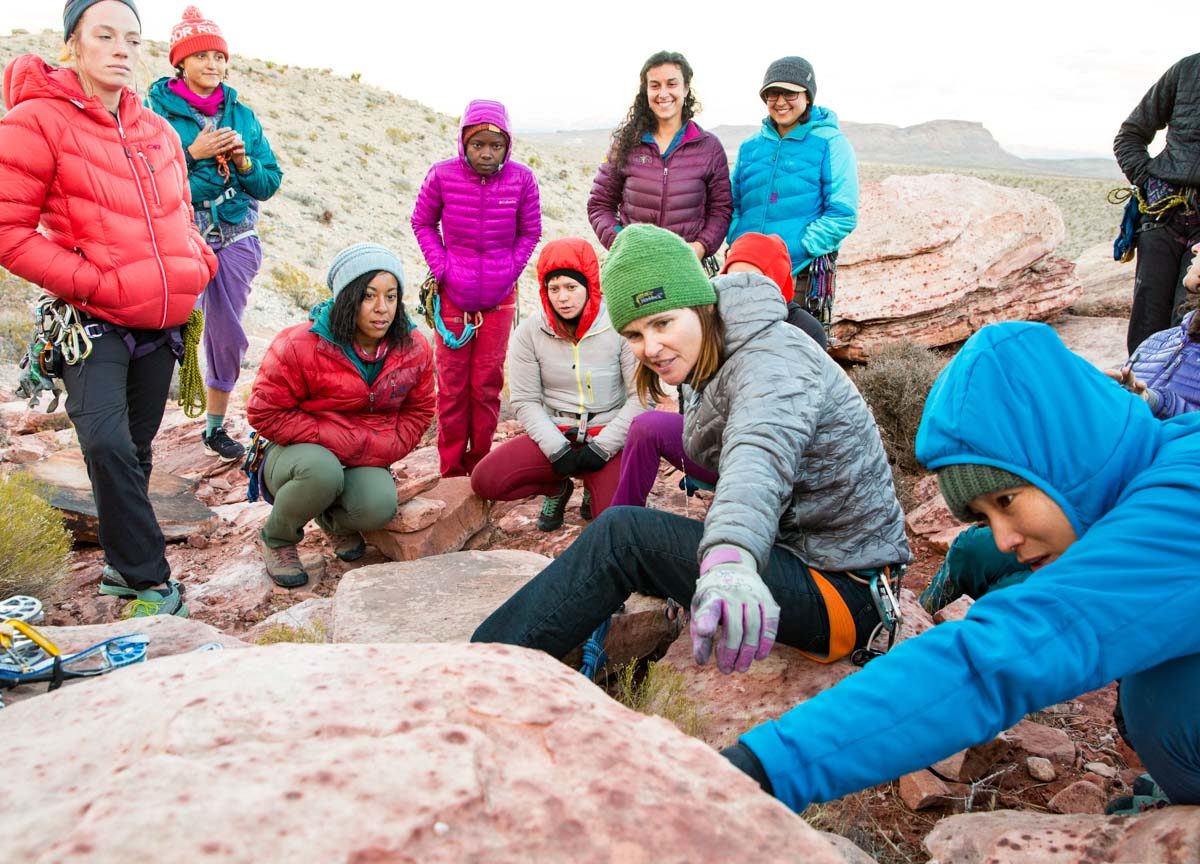 Our all-women environment created a safe space for conversation and questions. When you are the lone woman in a space dominated by men, you can feel pressure to prove that you belong and deserve to be there even though no one who looks like you is in this space. It can instill a fear of looking weak, which in turn can make it impossible to share parts of you that are vulnerable in order to grow. With female-led courses, there is a higher chance that your instructor has had similar experiences in the backcountry and might even be able to offer tips on how to deal with situations where sexism can affect relationships with clients, bosses and peers. 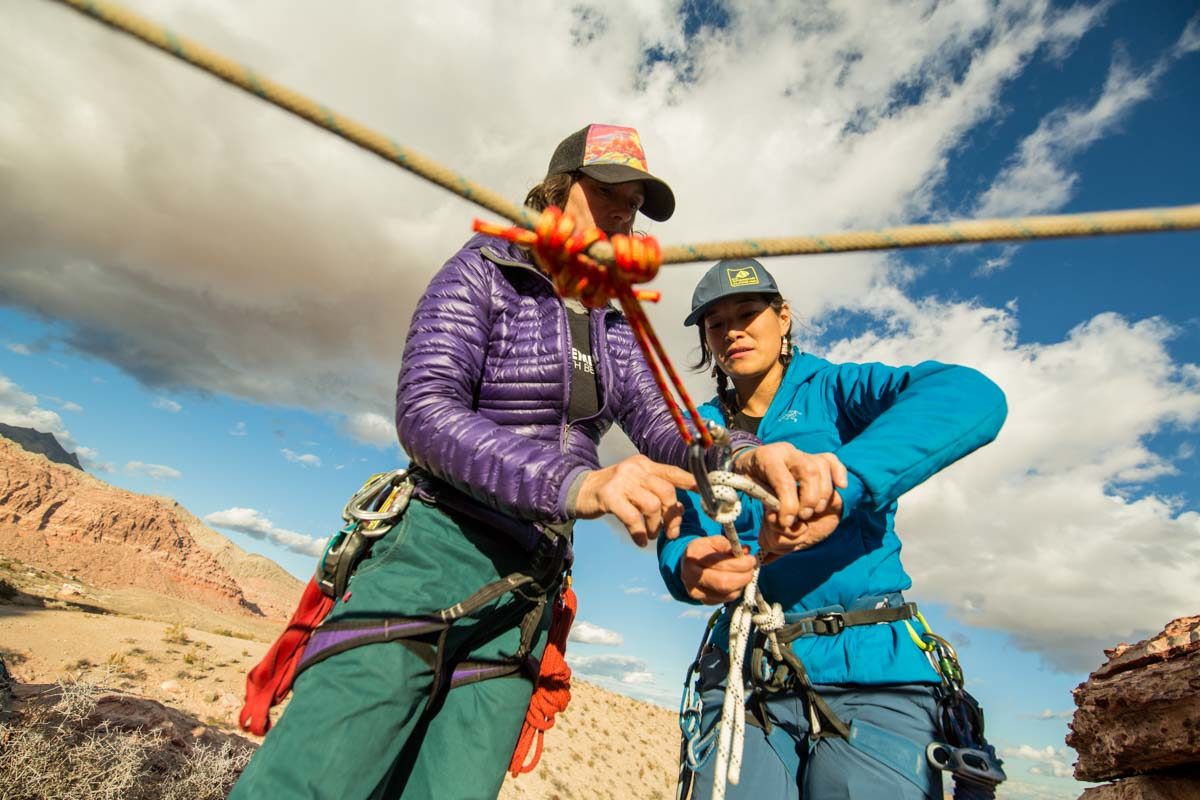 The seed of an idea for this program began to sprout at an impromptu gathering at the Outdoor Retailer Winter Market last January. The group was primarily comprised of a handful of women who are working on grassroots initiatives to get more women, more women of color specifically, into the outdoors and involved in Camber Outdoors. The goal of the meeting was to identify challenges that women of color are facing in the outdoor space. One specific challenge that came to light was in the guiding industry.

The challenges facing a woman of color who is interested in getting into guiding can add up quickly. The first challenge, that almost everyone faces, is the financial cost of training courses, assessments and required ancillary certificates like a Wilderness First Aid Certificate. In addition, it can be lonely and often alienating to be not only the only woman but also the only person of color (POC) in a space of learning. Often the experiences you’ve had or risks that you might encounter in the workplace are not relatable to others in the course or the instructor. 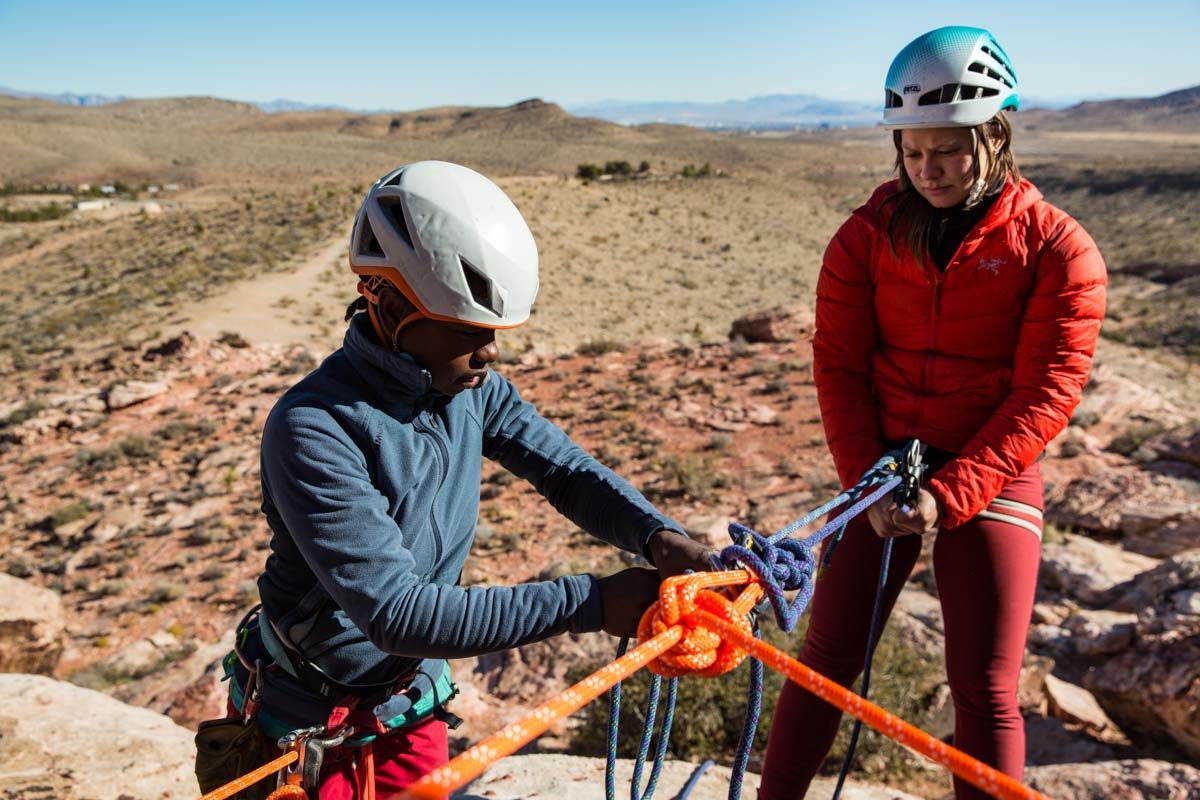 Almost a year after our first conference call to brainstorm ideas, the pilot women’s SPI Course took place and it was prepped for success with our amazing roster. Instructors included Elaina Arenz (the only female SPI Provider Trainer in a cohort of ten), Tracey Martin (one of only four women SPI Course Providers), and Erica Engle (the 11th woman to become an IFMGA guide). Participants included Brown Girls Climb and Flash Foxy leaders, NOLS educators and many other women making their path in the outdoor space.

The pilot course was an incredible accomplishment on many levels. The thoughtfulness, intentionality and respect that each woman came with created one of the most special places I’ve had the privilege to experience. I am confident that lifelong “friend-torships” were created and it feels good to know I can rely on these women to support me along my path. This is only the beginning. I hope that this paves the way for more underrepresented groups to find space in our outdoor community and industry. Our knowledgeable and accomplished instructors left no doubt that women not only belong in the mountains, but we are also capable of leading the way. The future of mountain guiding is queer, is POC, is women. 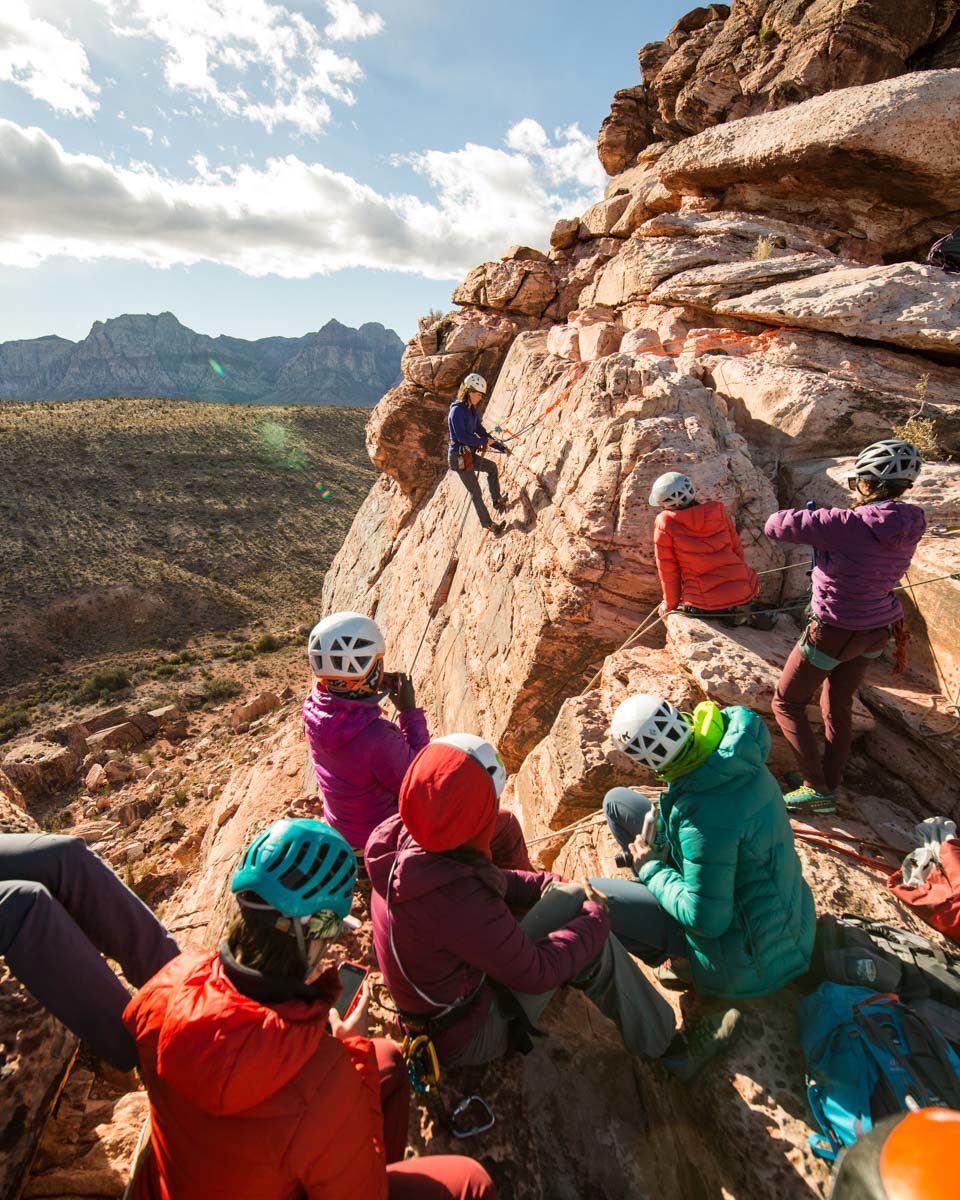 Shelma Jun is the founder of Flash Foxy and the Women’s Climbing Festival. Flash Foxy was created in 2014 to celebrate women climbing with women and to be a place where women can come to feel inspired by and connected to each other. The Women’s Climbing Festival brings over 300 women together over a weekend of climbing, panels, clinics and more twice a year in Bishop, CA and Chattanooga, TN.  Shelma is a current board member of the Access Fund and in 2017, was named one of 40 women who’ve made the biggest impact in the outdoor world by Outside Magazine. She is also a founding member of Never Not Collective, a new media collective started in 2017 by four unapologetic women of the outdoors. Never Not Collective is currently filming Pretty Strong, a feature length women’s climbing film. A California transplant based in Brooklyn, NY, Shelma can often be found plugging widgets in the Gunks and getting scared on highballs in Bishop.