After our expedition to Kyzyl Asker last year, Ines and my rope partnership also became a life partnership. With more big alpine climbs under our belts, like the north faces of Piz Badile and Grandes Jorasses, our appetites grew. We already knew we could work really well as a team and wanted to test ourselves on something bigger and higher. Going to the Himalayas together was the next logical step. The valley on the south side of Shishapangma is a very quiet place with good potential for alpinism. Initially, we were both careful with expressing our greater wishes and only discussed the idea of going in the area to climb some mountains up to around 7000m to see how we would do together in higher altitude. After months of preparing, we both finally became brave enough to vocalize our objective. We wanted to try the south face of the 8027m high Shishapangma, potentially on a new route. Over the winter we spent numerous days in the mountains preparing and got a  welcome dose of self confidence after completing a winter travel of the Watzmann Family in a one day push. Shortly before leaving on the expedition our very good friend Marc Andre Leclerc died in the mountains. Over the past few years I climbed a lot with him and I knew how similar our risk tolerance and danger perception was when sharing a rope. It made me think a lot about the life traps we can find in these otherwise beautiful lives we live as alpinists and climbers. Going on a planned expedition with the right mindset was all of a sudden a far from sure thing. In the end, Ines and I decided it was the right thing to process the death of a friend in the environment we liked to share time with him the most.

In the middle of April we found ourselves setting up a base camp at an altitude of 5250m with a view of the south face of Shishapangma. Besides our cook Nima and his helper Karsang, it was just us and the mountains. It was exactly the way we wished to experience those mountains, as peaceful as possible. The following month that we spent in and above base camp ended up being a very tough one for us. The constant snow showers combined with very strong winds would frequently knock down the tents in base camp. Despite the weather, we did our best to acclimatize as much as possible. Our first choice for this was to try to open a new route on Nyanang Ri (7071m). 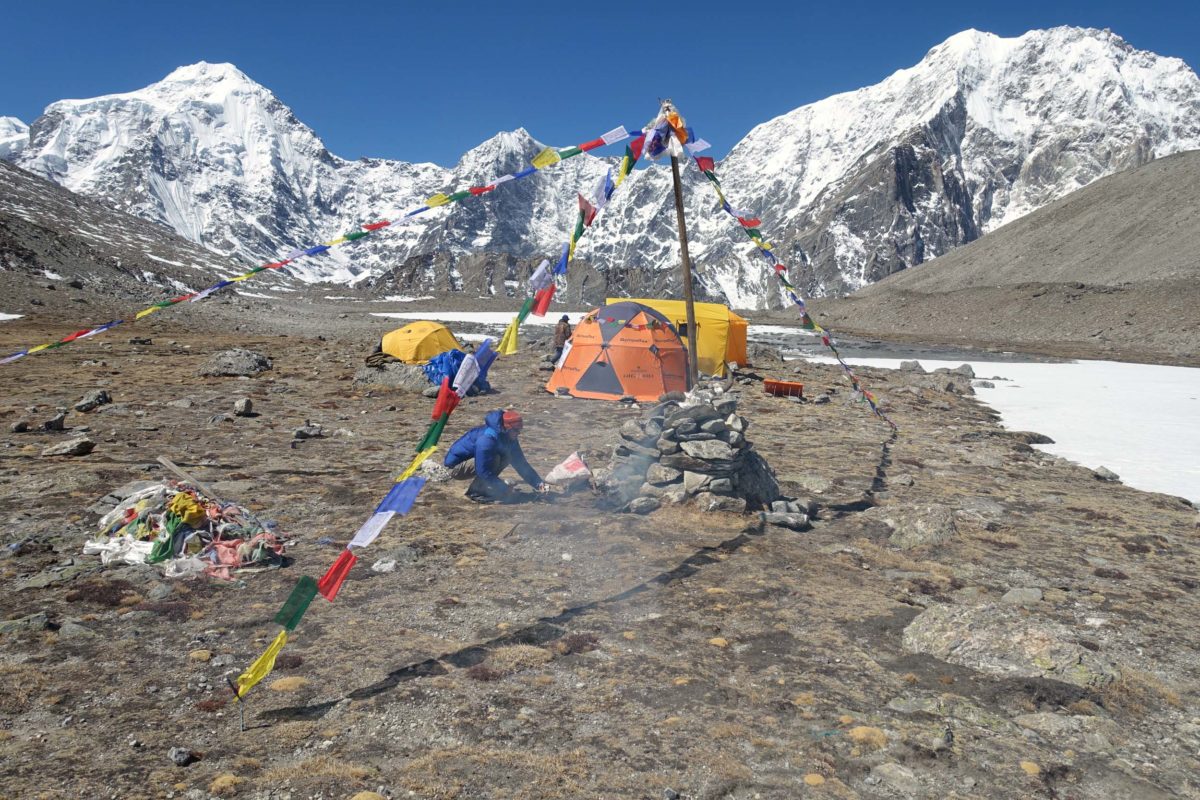 On our second visit to Nyanang Ri, we felt ready to try to climb to the summit but ended up having an experience that would alter our entire expedition. The night before the summit push we set up a bivy on a bergschrund under clear skies. We felt as though we were in a safe place and went to sleep early to get enough rest for the next day. Throughout the night it started snowing heavily and as the morning neared we were both quickly woken up by a frightening noise and intense vibrations. We were in the path of an avalanche. Thankfully we were fast enough and managed to get ourselves out of harm’s way, but our tent was completely buried. We were able to catch our breath for a moment until we realized that the gear we needed to get off the mountain was under 3 metres of snow. We then began a  2 hour digging marathon under the constant fear of new avalanche coming down. Luckily, we were able to retrieve the gear we needed and started our immediate descent back to the safety of base camp. 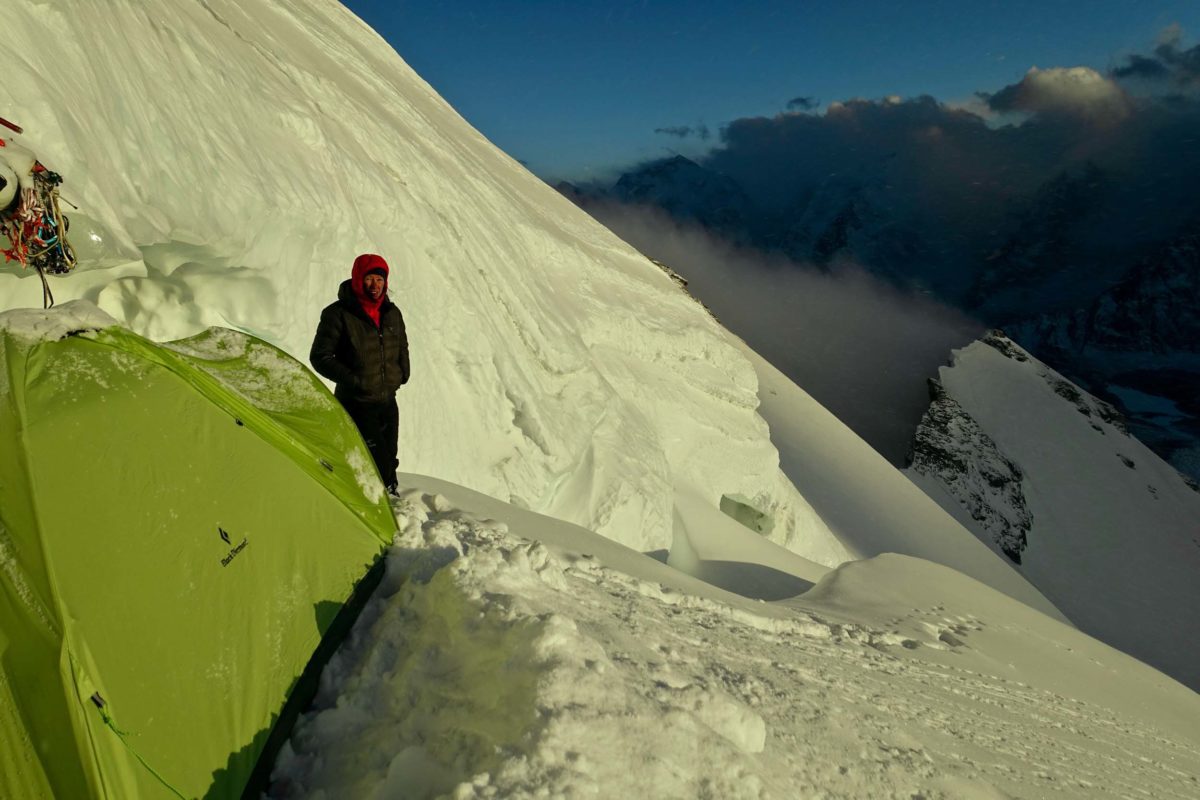 A number of days later, once we had somewhat recovered from the shock on Nyanang Ri, we attempted to climb Pungpa Ri (7450m), as we were not yet acclimatized enough for Shishapangma. We had a two day window between the snowfall, but were still being treated with strong winds and frigid temperatures. We decided to give it a go. On the first day we started from basecamp, we skipped the advanced base camp and continued to climb up to 6500m where we set up a tent after a long but successful day. On the next day we started early into the very cold and windy morning. It was really tough going and Ines expressed that she was feeling weak and very cold when we left the tent. I followed her silently as I could tell she was still willing to put her head down and give it a go. However, this drive ended quite soon after. She gave it everything she had, but not being able to eat properly the previous day nor in the morning left her with no energy. We decided to descend back to our tent where we waited for the sun before we continued back to base camp. After this we didn’t get another reasonable weather window for further climbing. We packed up basecamp and left for home a week earlier than planned with two memorable experiences in the bank. 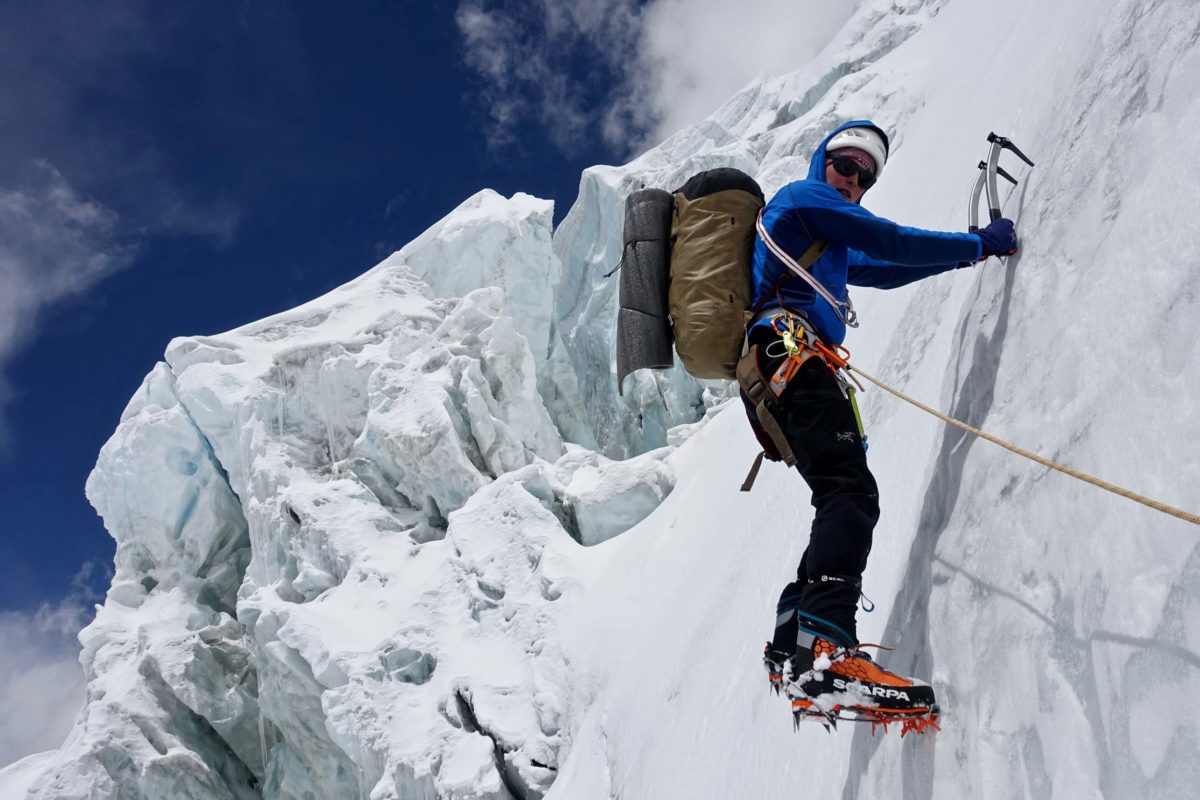 I once was living with a girlfriend who was a recreational climber and at this time I was 100% sure I would never want to go on a serious expedition with my life partner. My life has changed so much since then that there was no question in my mind this trip was the right decision, however I was still very curious to see how it would go. The fact that Ines is a mother made me think harder about the risks we would face, or better yet how we could avoid them even more. I know the trip was more intense for Ines for those reasons.

The biggest conflict I faced on this expedition was connected to the amount of suffering that is involved with this kind of alpinism, especially in the tough conditions we faced. On one hand I knew we were both on the expedition to give it our all and I also knew it’s in Ines’ nature to fight hard. On the other, there were moments when I had a very hard time seeing her suffering and wanted to stop her or do the hard work instead of her doing it. I found balancing these feelings especially challenging on this trip. We discussed the topic a lot during the expedition, which ended up being a good learning process for us as a team. 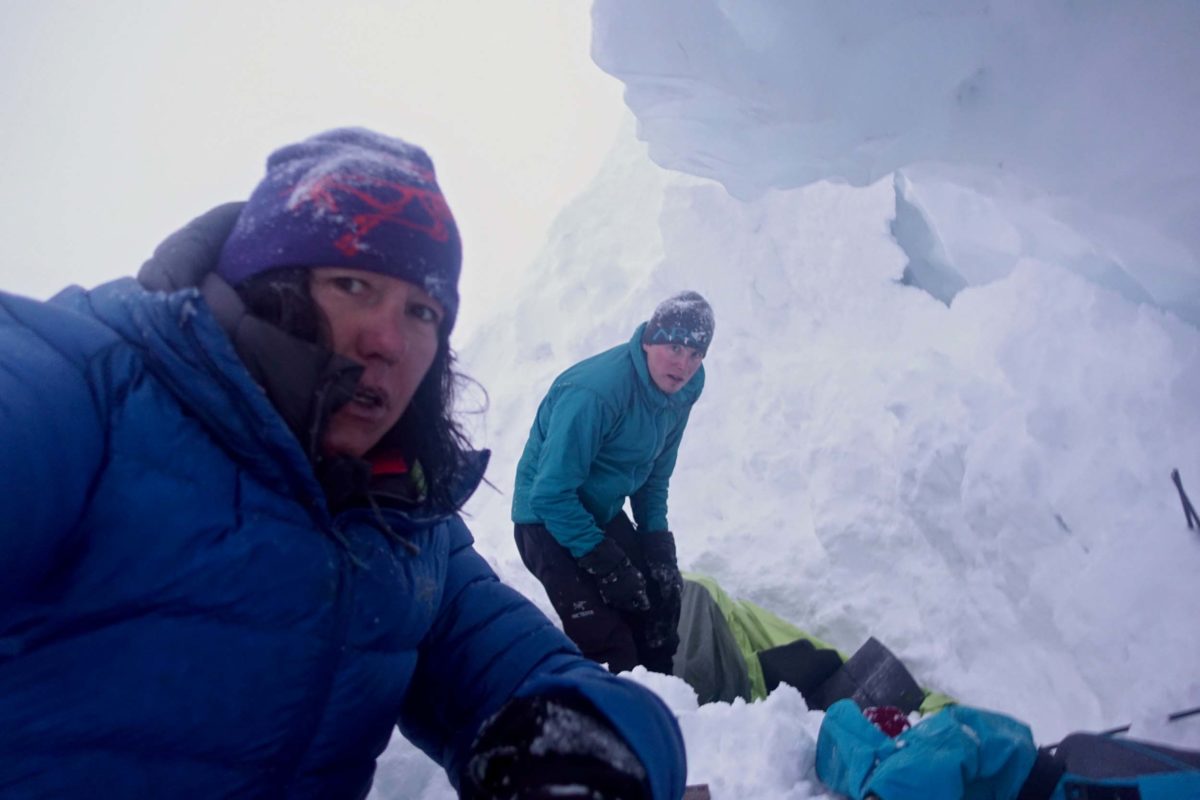 We got away from the avalanche on Nyanang Ri unharmed, but it affected us more than some might think. For days after we felt a weird mixture of feeling happy we are alive and feeling down as we obviously did something wrong. There is no doubt that we had luck on our side in that moment, but neither of us want to rely on luck when climbing. I could not help but to think of Marc-Andre and speculate if it was missed luck that kept him for ever on the mountain. 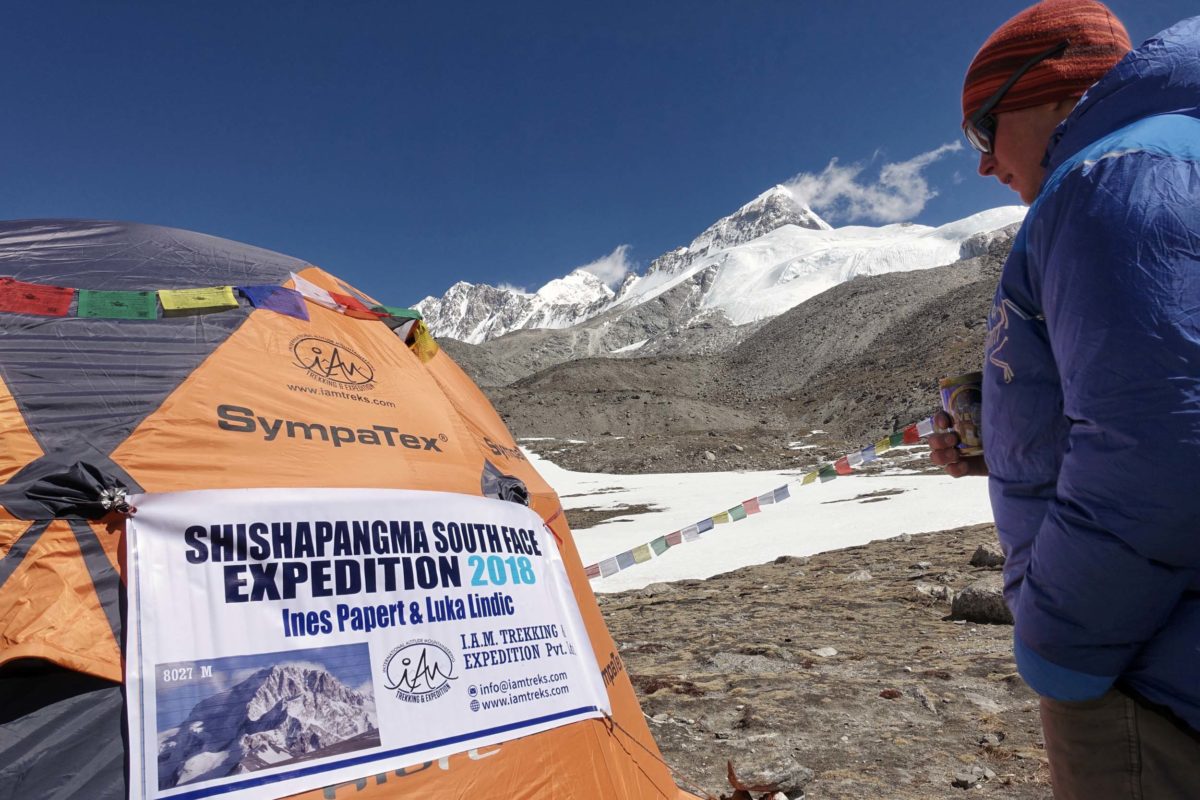 Things were not working out for us on this trip and in situations like this it would be easy to find an excuse to lower our expectations of doing everything in pure alpine style. It was Ines’ first time trying to climb an 8000m peak, and it definitely didn’t go as we would have wished. We failed to climb anything. We went through very tough moments both as rope partners and as a couple, but we always fought through it together and most importantly, made it back home healthy.

We feel good about accepting our failure on this trip and in sharing it the same way we would share our success. This isn’t always an easy feat.