The Faroe Islands are located a troll’s unsuccessful throw away from Iceland, about 200 miles north-west of mainland Scotland. This scattering of 18 isles in the middle of the North Sea was our playground for a few days as we prepared to run their first ever trail marathon and ultra-marathon. The remote, rugged terrain makes it a hill runner’s paradise. 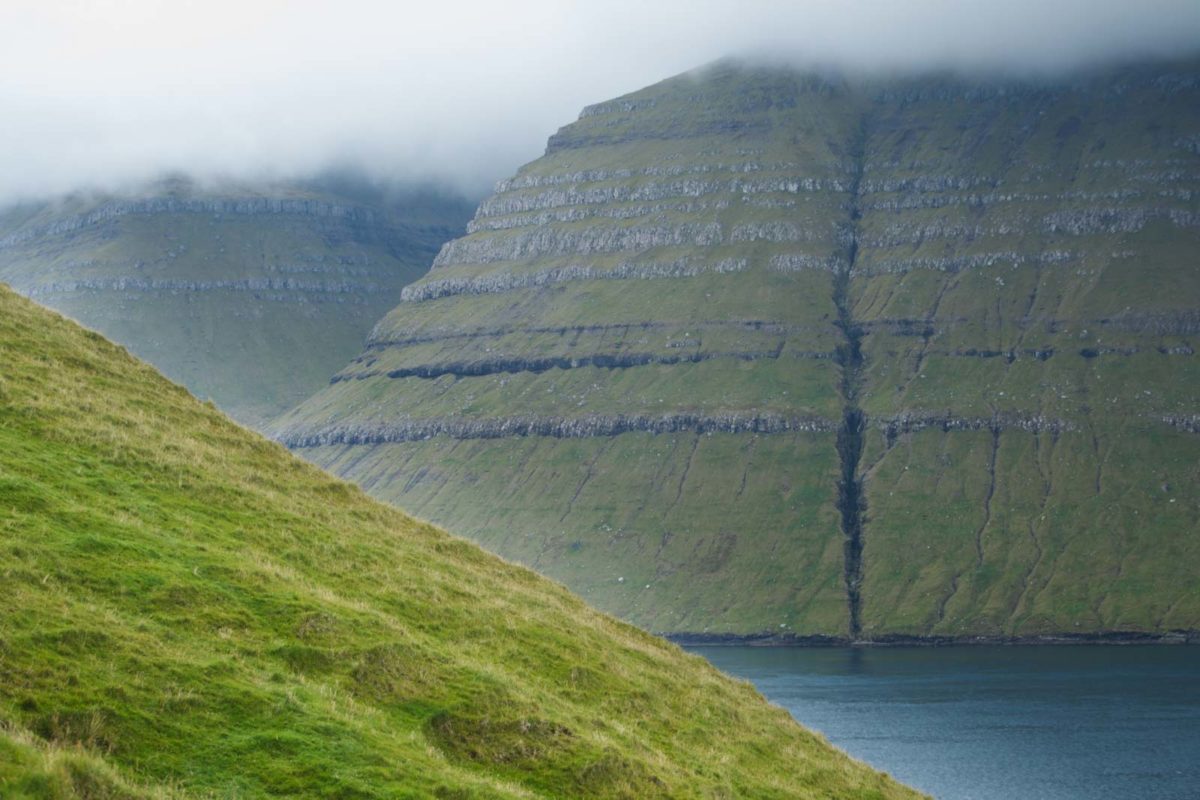 We knew we were in for a tough challenge from the first steps in the terrain. The hills are steep: you are never more than 5km from the sea, yet the highest peak (Slættaratindur) is nearly 900m. The underlying volcanic rock makes for tricky running at higher altitudes and the grassy tussocks slow progress at lower levels. You would have thought that some of the 70,000 sheep on the island would have made some useful trods, but any faint whispers of a path disappear quickly.

Island hopping is relatively easy using the undersea tunnels or the extensive ferry network, so long as you’re not in a hurry. On the day before the race, we explored Kalsøy, a long thin island only accessibly by boat. As with so many places we visited on our short stay, I felt like I had never been anywhere quite like it. The 20km long island is barely 3km wide but has a series of 13 peaks, some approaching 800m high. With no real aim or purpose, we set off up the only road on the island the village of Trøllanes that has a population of about 20. (The single lane tunnels are an experience – there are laybys, but it still a high stakes game of chicken). From there, we explored the hill sides and sea cliffs, mixing with the gannets and fulmars who really ruled the territory. We may have been a little over-excited before the race the next day but at least we knew what we were facing. 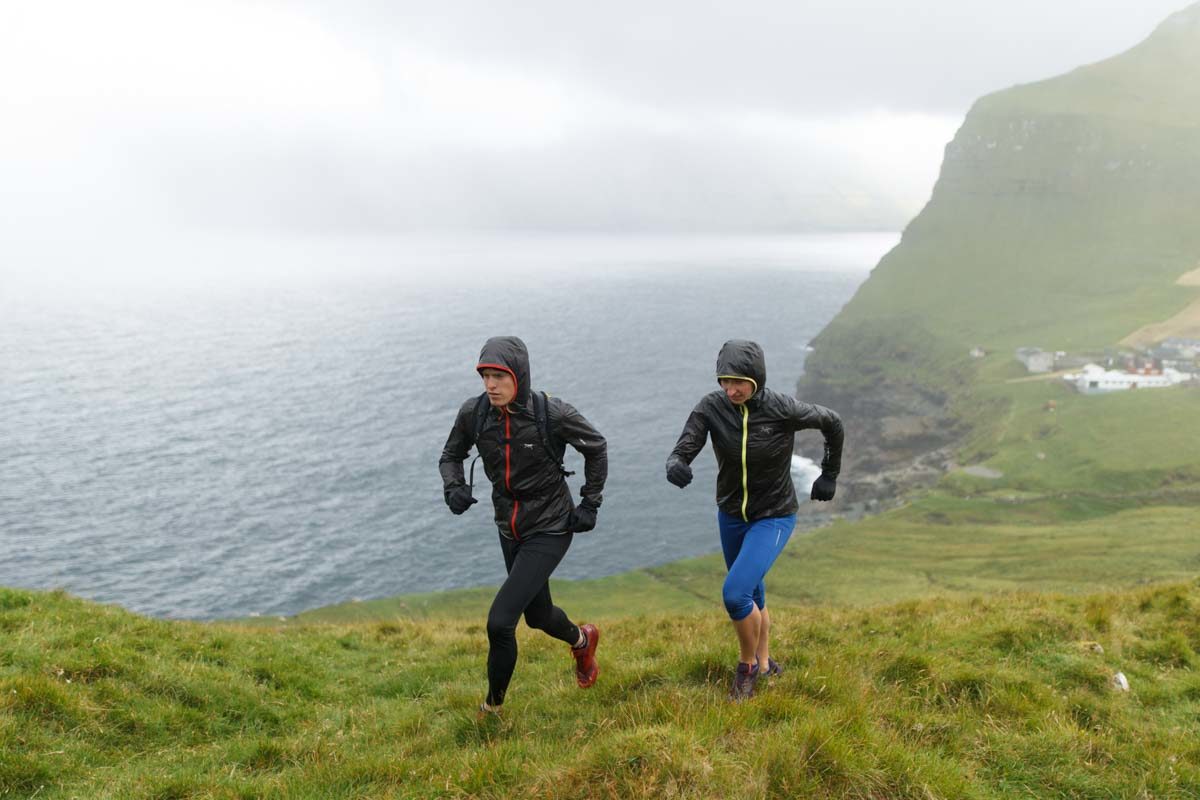 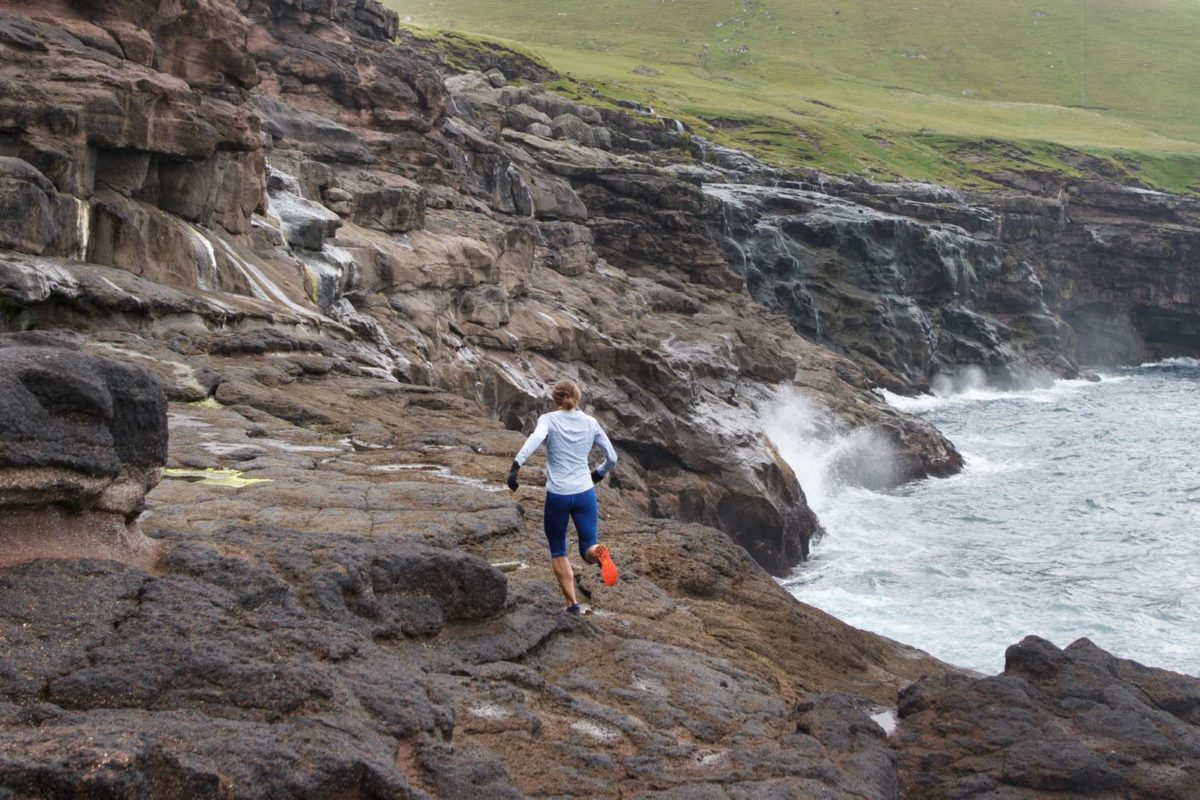 The race itself went from Leymar, a village on the west of the main island Struroy, over the hills to Tjørnevik on the north east coast. My marathon-ish length course, was about 45km distance with around 2300m of ascent/descent. Martin took the circuitous route on the ultra-marathon which was meant to be 65km and 3000m. We literally started at sea-level, backs to the waves on the black sand beach but quickly hit the fells. The initial terrain could easily have passed for some English hillsides: short-grassed spurs with marshy areas in-between. 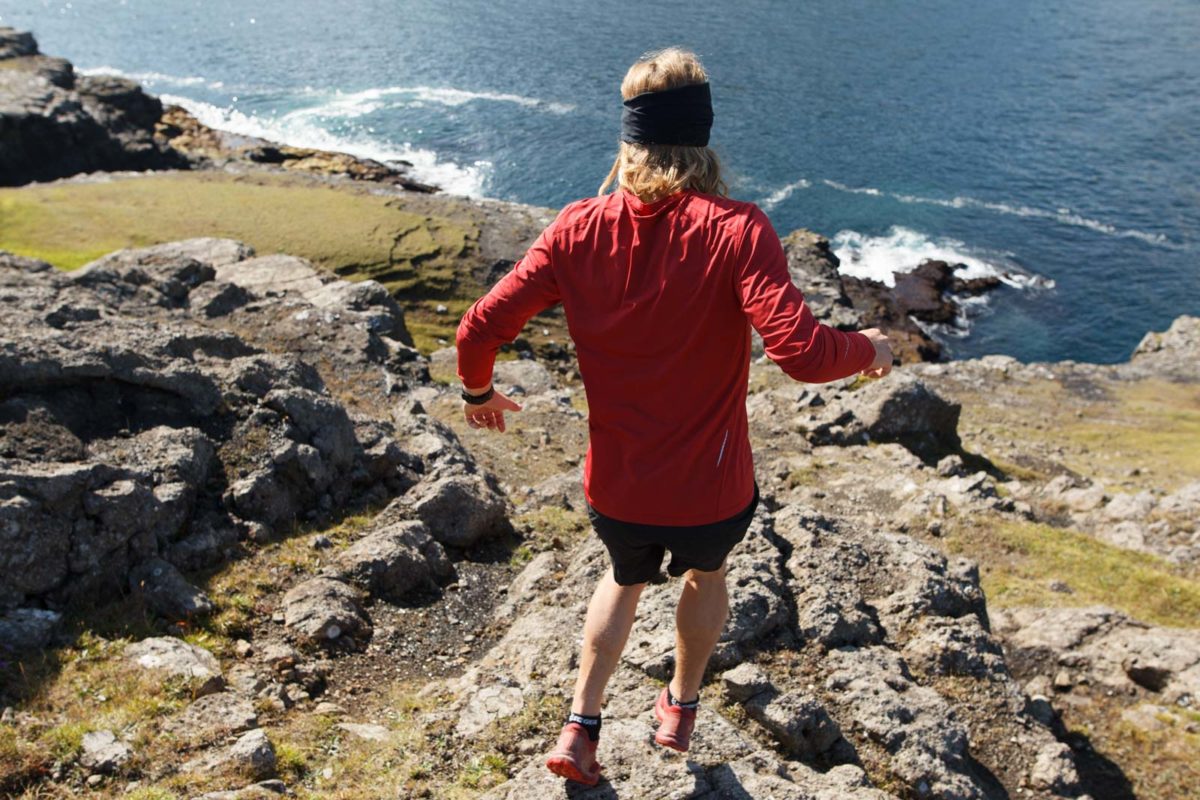 As soon as we started to climb, we hit the cloud layer. This is an ever present feature on the Faroes as, although it is quite far north, the jet stream supplies it with 5-11 degree temperatures and a good volume of precipitation the whole year round. It’s this moisture that keeps the spectacular waterfalls in full flow. 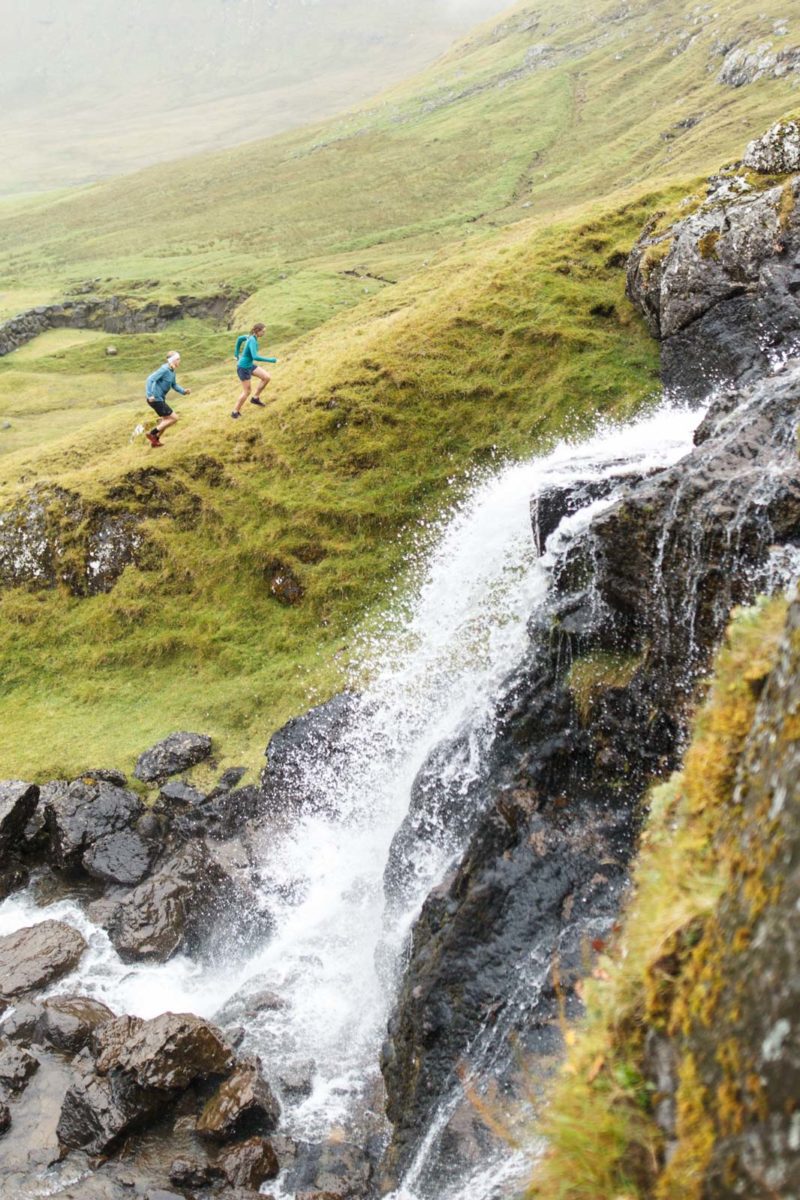 But the wonderful thing about the Faroes is that when one valley is stuck in cloud, the next valley is often clear. It certainly made the long slog up to the Koppsenni ridge (789m) well worth it. I couldn’t help but whoop and holler my way down towards Saksun as I looked out over the carpet of cloud over the North Sea on one side and down towards the sea cliffs on the other.

It was easy to forget that it was a race – I’d have happily spent all day up there. But the run was going to be long enough already without extra stops. It was route one to the shore line at this point, dropping the 800-odd metres in not much over 2km. This was one of my favourite sections of the race as the arctic skuas (the bullies of the skies) circled overhead and I skipped my way over the skeletons of their recent victims. 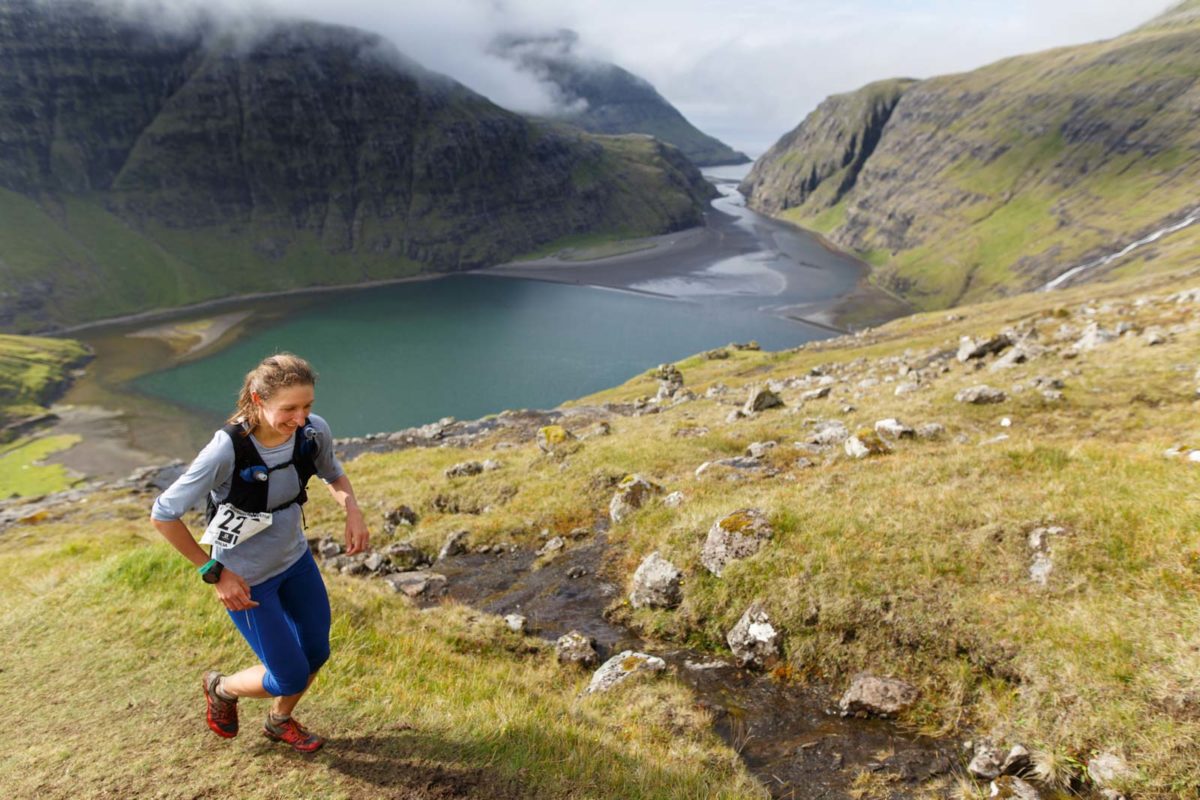 After a run up Saksun beach, we hit a short road section that was quite welcome by this stage. ‘All’ that remained for me was the final 8km over a 600m ridge, while Martin still had an extra loop to do here. For the first time in the race, there was a reasonably runnable path with cairn markers, although we had gone back up into the clouds again so visibility was poor. Also, for the first time that morning, I got my racing head on. I had just overtaken the race leader on the climb, but I had seen he had been a stronger descender and so could easily catch me back up on our plummet down to the finish line at Tjørnevik. I never looked back, so it was with great relief that I crossed the line first in 5 hours and 35 minutes. Martin followed a few hours later as an honorary winner, having been in the leading group of 3 on the ultra-marathon course when the cloud closed in to such an extent that the course markings were no longer visible. The day ended as all good days should, running into an ocean that is far too cold for anyone sensible. The mist soon closed in at sea level too, but just in the distance we could make out the stone stacks of a giant and a witch, another frozen stone reminder of a failed mission to drag these islands to Iceland. I for one am very happy they never made it. 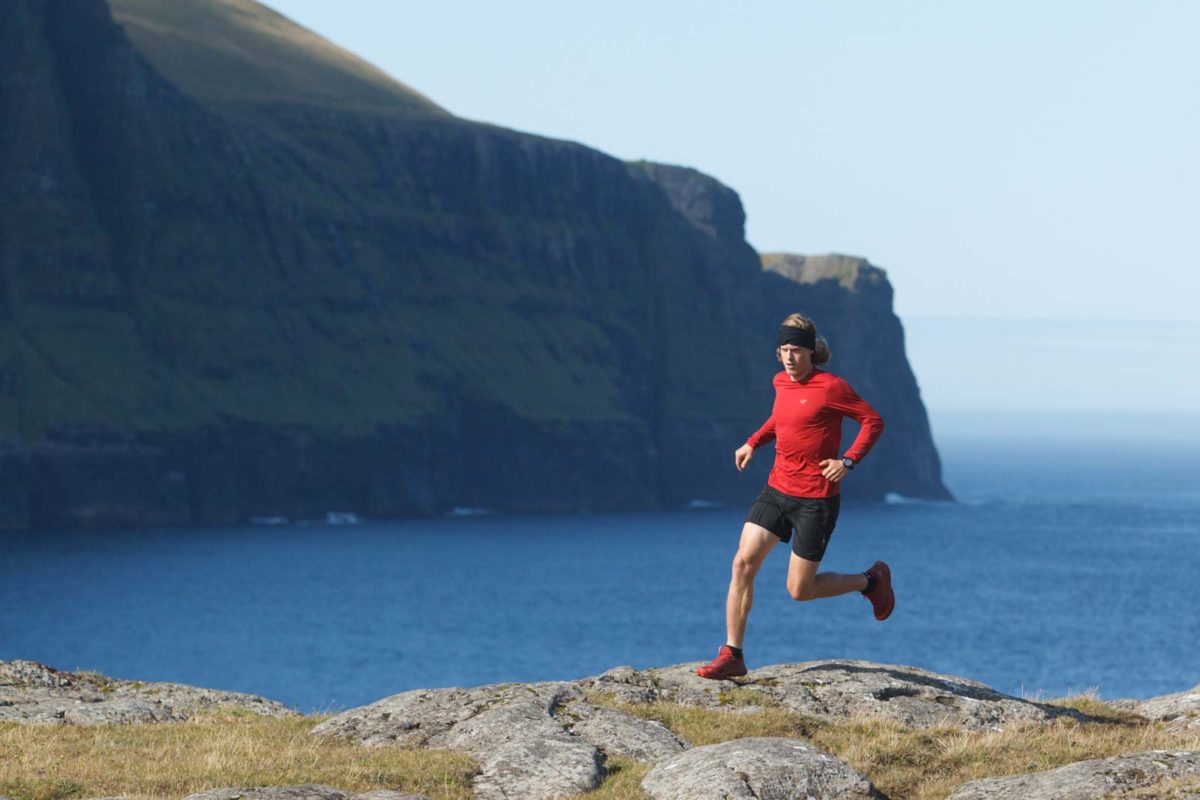 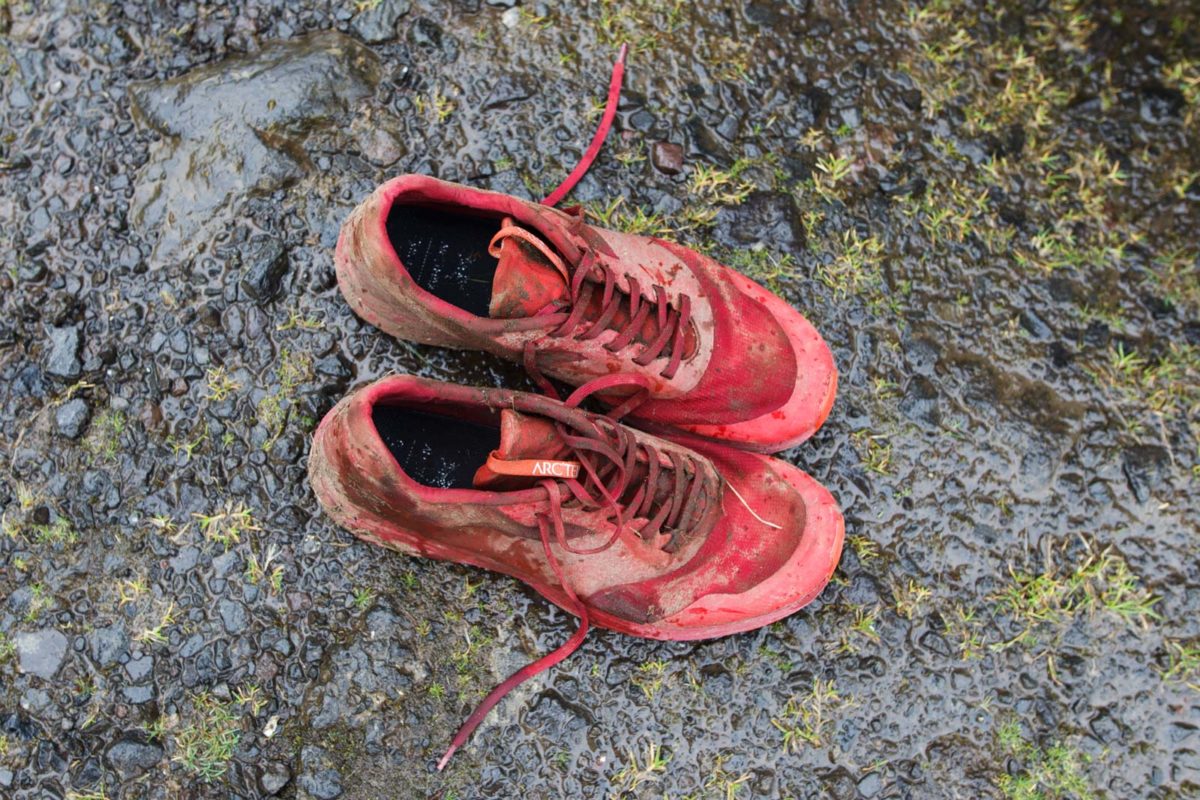