In 1854, John Rae travelled 550 km by foot from Hudson Bay to the Northwest Passage. Unlike earlier explorers who shunned indigenous methods of travel in the Arctic, Rae extensively utilized Inuit knowledge by travelling with them, dressing in animal skins, sleeping in igloos and living off the land.

In the course of his journey he made two significant discoveries. The first was an eastern strait (since named Rae Strait) around King William Island, which was eventually used by Roald Amundsen to become the first person to successfully navigate the Northwest Passage. Rae’s second finding, thanks to evidence presented to him by local Inuit the area, was that all 129 members of the infamous Franklin Expedition (who had been missing for seven years) had perished.

In April and May of 2019, David Reid, Richard Smith, Frank Wolf and Garry Tutte set out on skis to retrace this little known chapter of Arctic history, with David and Richard successfully reaching Rae Strait after a month of travel. Naujaat Intersection: The starting point of our journey was the hamlet of Naujaat, an Inuit community tucked into the Northwest corner of Hudson Bay. From here, we’d begin our retracing of John Rae’s 1854 expedition. 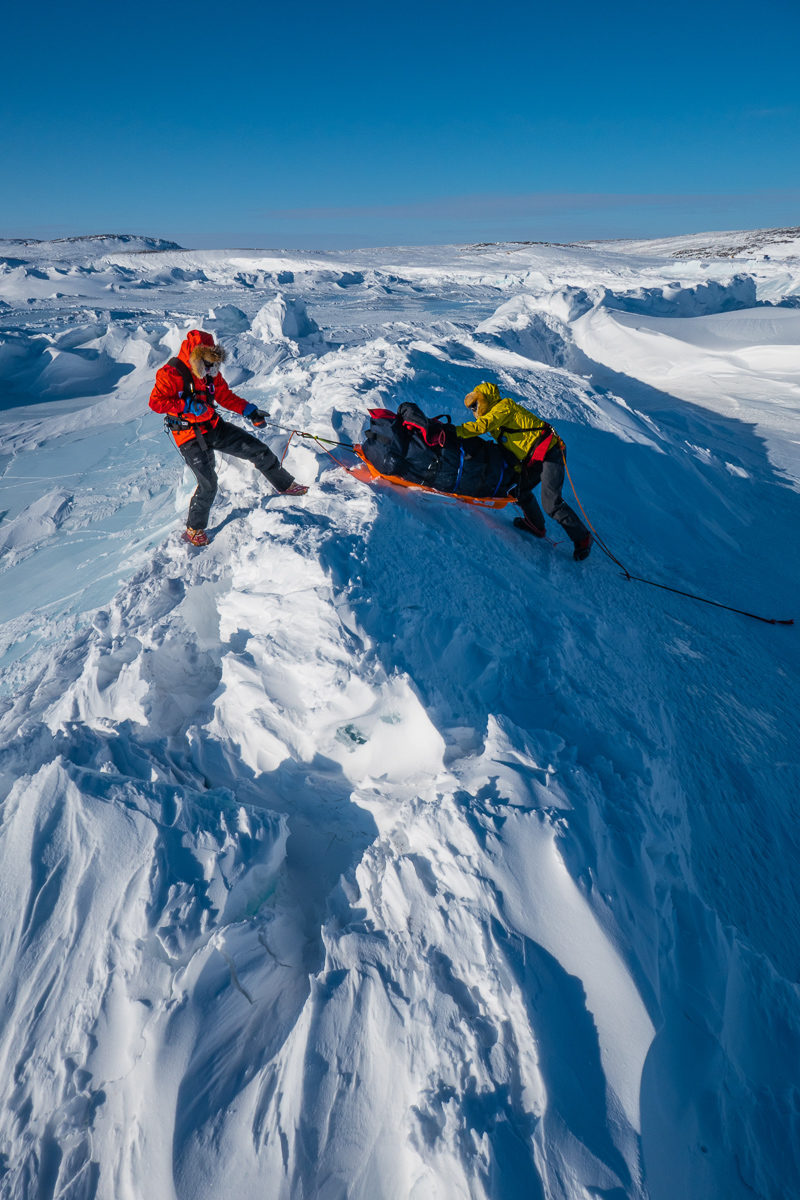 Hauling over ice: Team members David Reid and Richard Smith haul sleds over ice heaves at the mouth of the North Pole River, our inland route to connect Hudson Bay with Committee Bay. 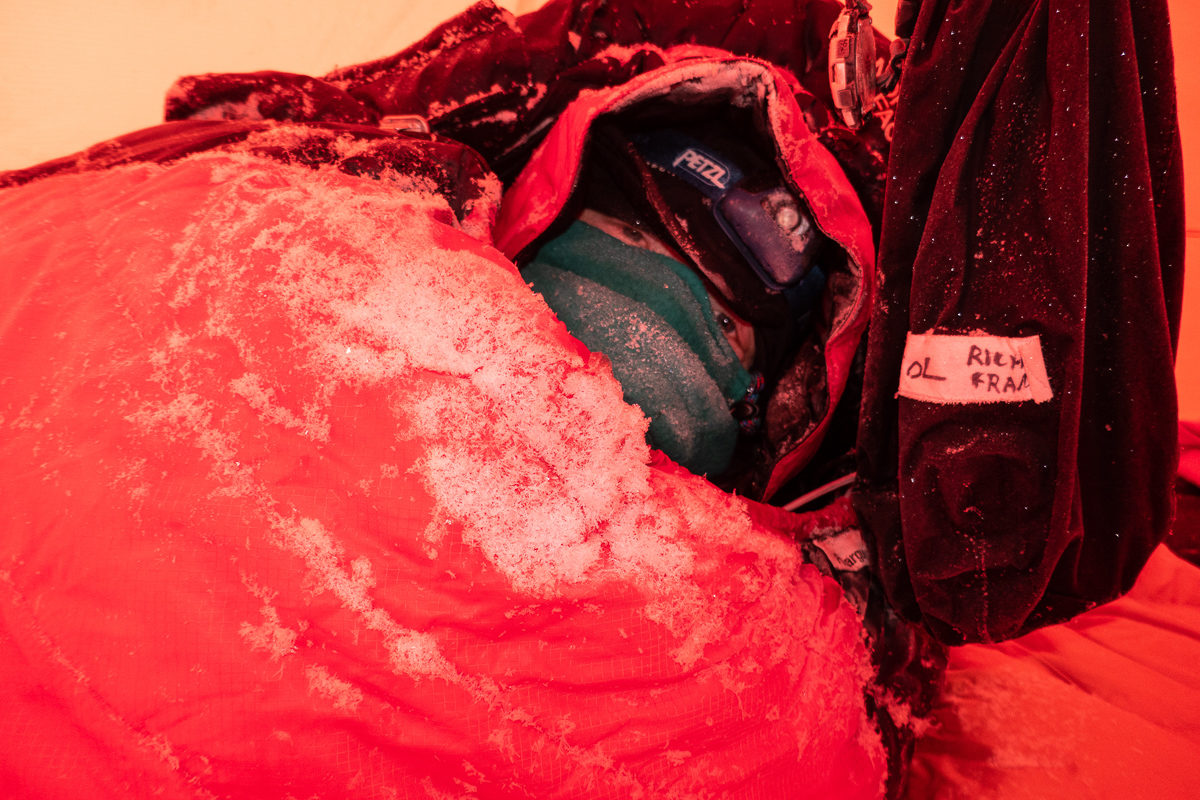 Morning Richard! Richard Smith wakes bleary eyed and encrusted with frost after another night sleeping out in deeply subzero temperatures. With the thermometer dropping as low as -55 C on this journey, managing the cold was always at the forefront of daily activities where frostbite and frostnip were constant concerns. Rae used this string of lakes and rivers along the North Pole River system to reach the Northwest Passage, though the waters are rarely travelled today. 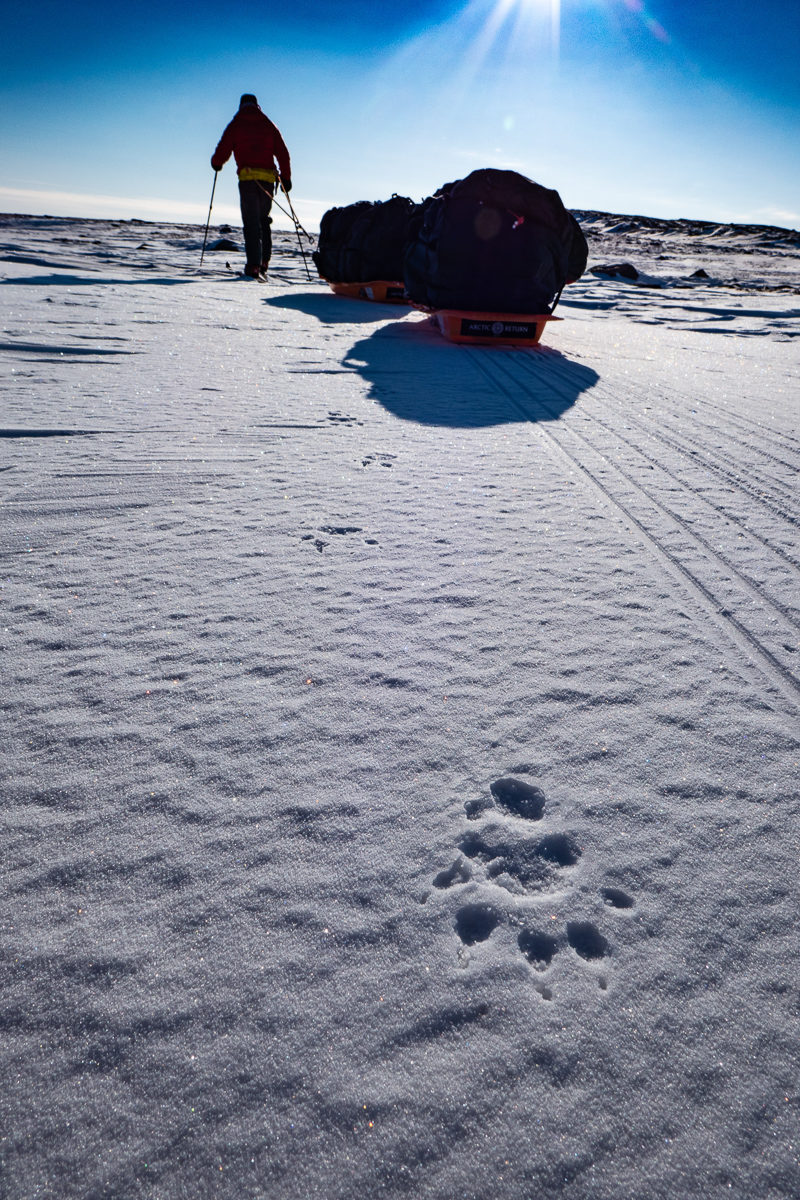 Richard skis alongside the tracks of a wolverine. These elusive creatures aren’t often spotted but we were lucky enough to see them on two different occasions on Committee Bay. Their dark fur stood out like a beacon on the white of the sea ice, darting between chunks of broken ice. Highly effective and aggressive scavengers, they will trail wolves and polar bear to feed on – and sometimes steal – their kills.

David and Richard work their 200lb loads through the broken sea ice of Committee Bay, a 100km stretch we had to ski over the Arctic Ocean. The team wore a full Arc’teryx shell and pant combination every day of the journey to repel the constant, biting wind. The prank rock rears its ugly head again. David discovers why his sled felt particularly heavy that morning in the form of a rock that Richard deftly placed on his sled to start the day. 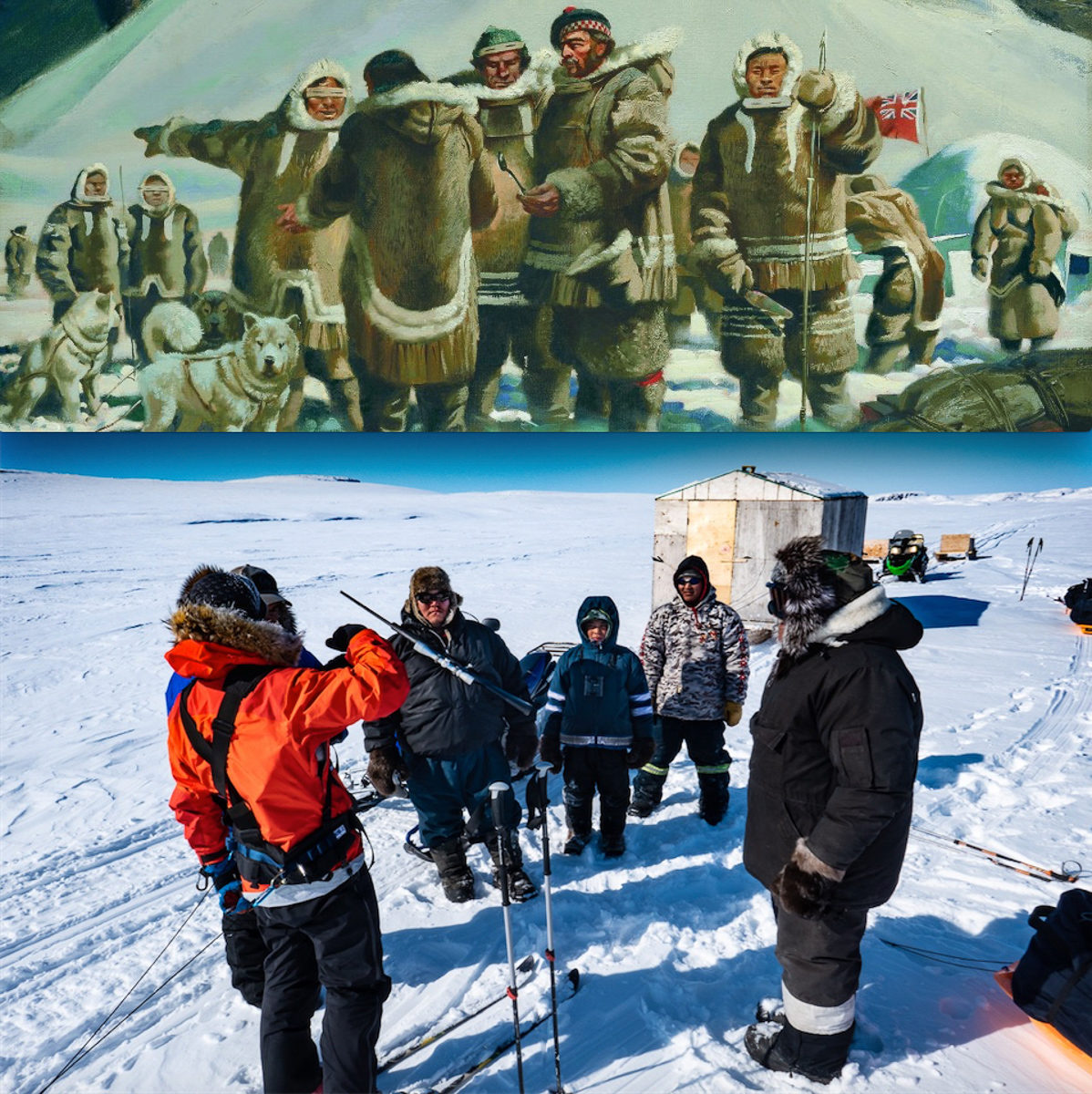 David chats with a group of Inuit travelling along the Kellett River to check fishing nets they’ve set to ensnare char under the ice. As John Rae did back in 1854, we encountered lots of local Inuit along our route- particularly as we approached the hamlet of Kugaaruk. With an intimate knowledge of the land, we would gather route and trail information from them, and they were more than happy to oblige. Ever practical, they were a little puzzled as to why we were travelling on skis instead of snowmobiles. David works over a wind-scoured landscape between lakes. Like a desert, it rarely precipitates in the arctic, but what does fall is steadily shaped into a rock-solid sastrugi art piece.