Our mission to explore the granite spires of Chani in northern Argentina was the brainchild of adventure connoisseur, Paul McSorley. Paul is an expert at finding spectacular and remote places ripe with first ascent potential. I knew of his various adventures, so when he asked me to join him I didn’t hesitate for a moment. Will Stanhope and John Price also jumped on board, rounding out the crew. We would be the first gringos to climb technical rock in the range. 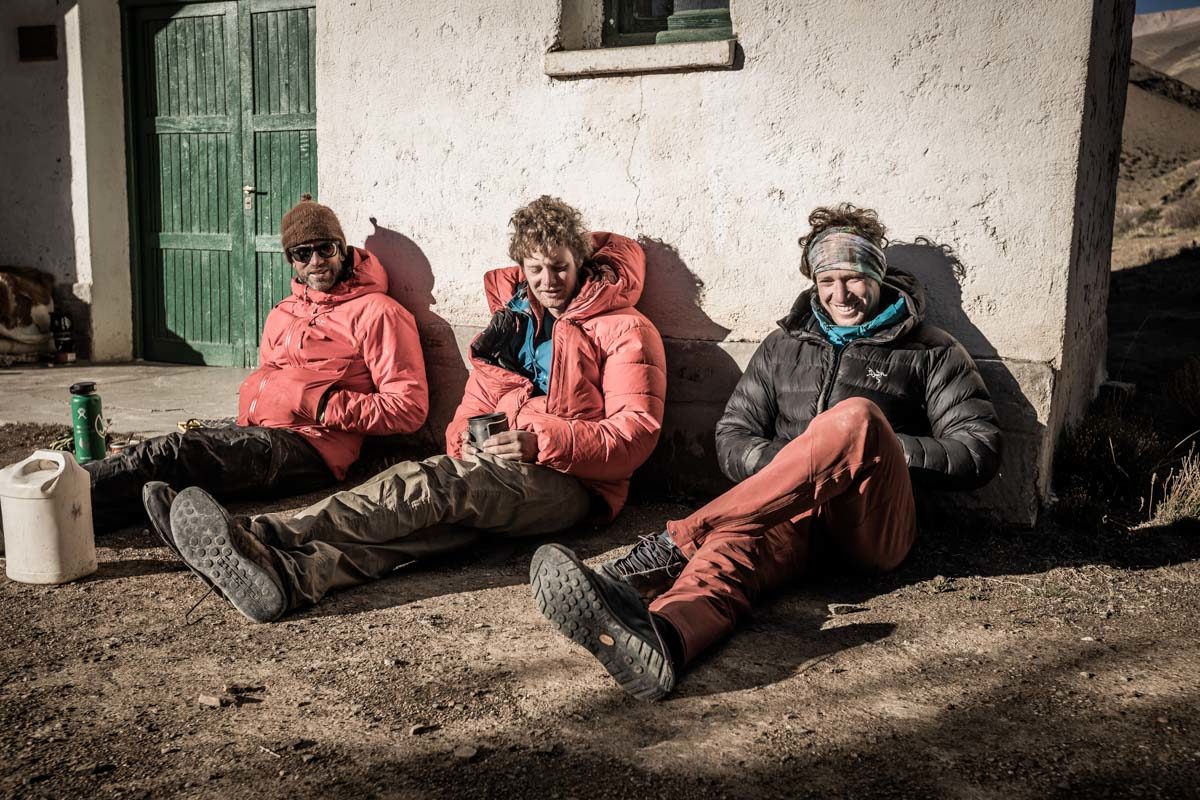 It was one of Paul’s many friends in the southern continent who let slip the location of this mythical place. Blood red, riddled with discontinuous crack systems, and all standing proud thousands of metres above the driest place in the world – the Atacama desert. Paul had a few blurry photographs and a short film to show us. He didn’t know a whole lot more than that. I didn’t know anything, nor did John, and Will was still calling it Patagonia… This trip was going to be an adventure! 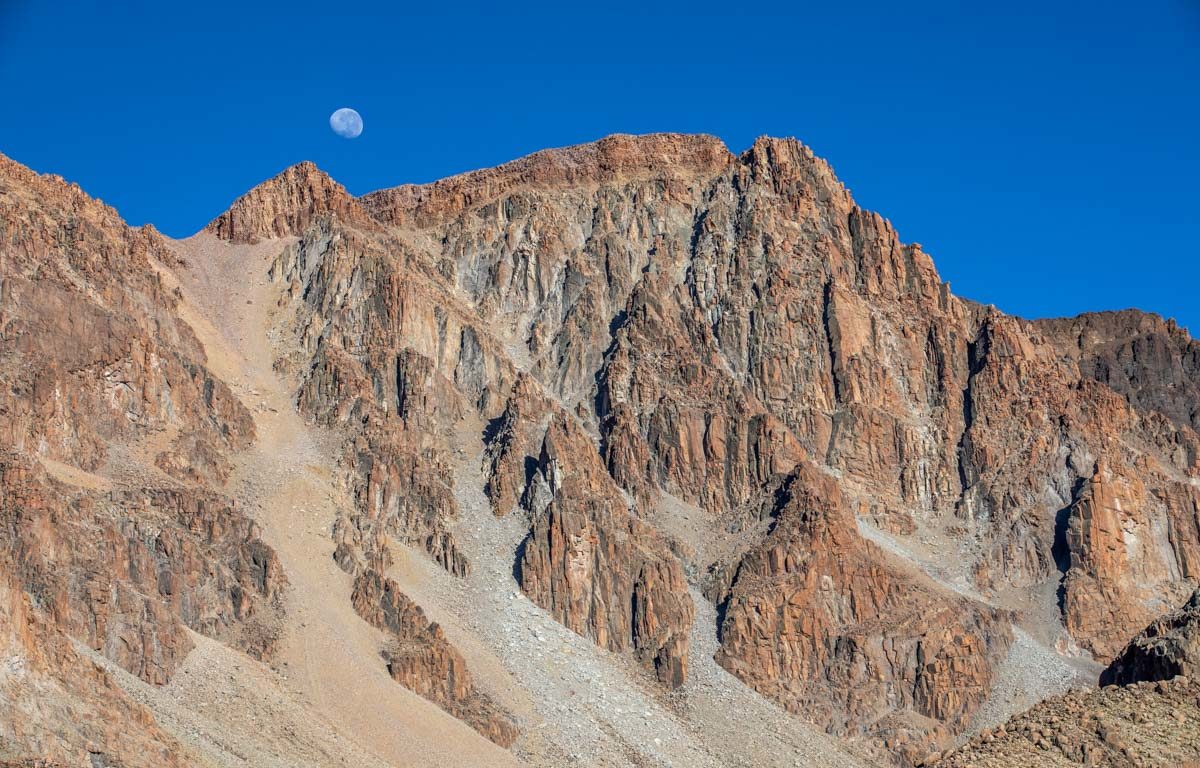 The adventure started in the airport. John, Will and I left Canada early. “So boys, where on earth are we going!?” We made it to Salta despite some airplane sickness, a confiscated power bank, three hours of immigrations and two lost bags. Things weren’t looking great to start, but we persisted. Paul arrived and we made a mission to the local climbing club. 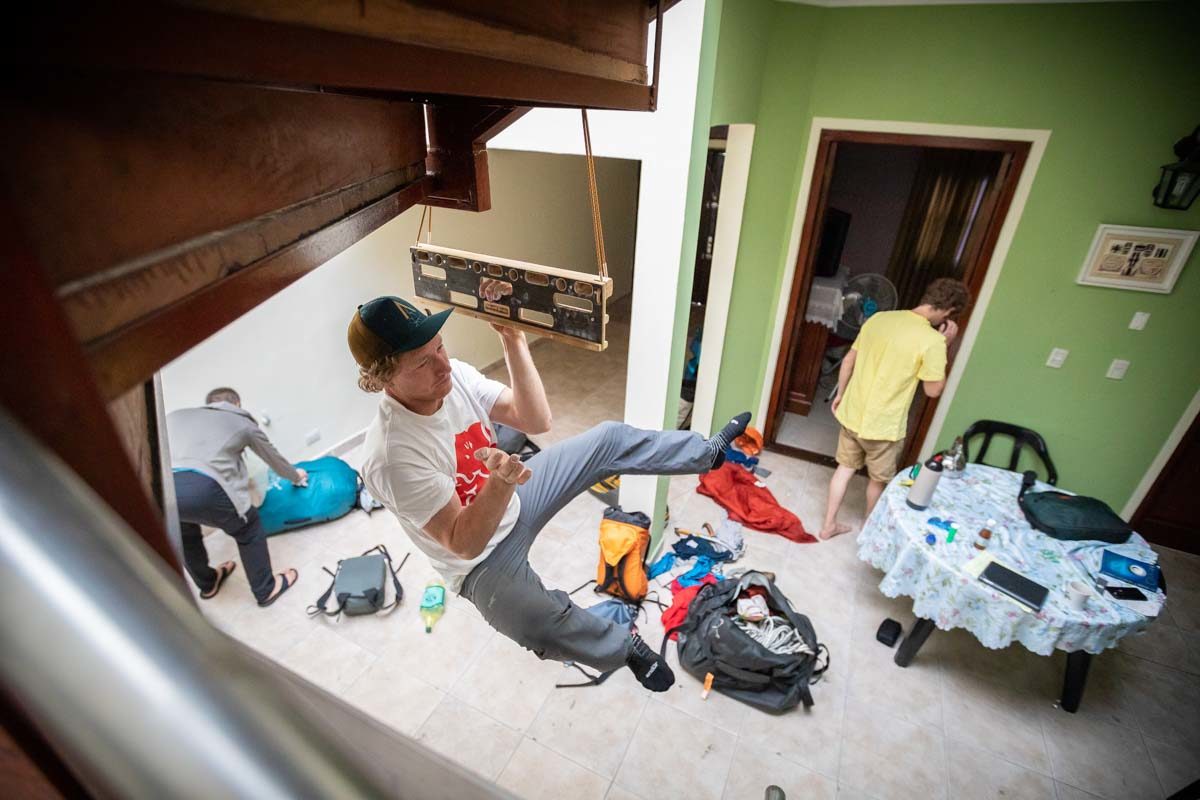 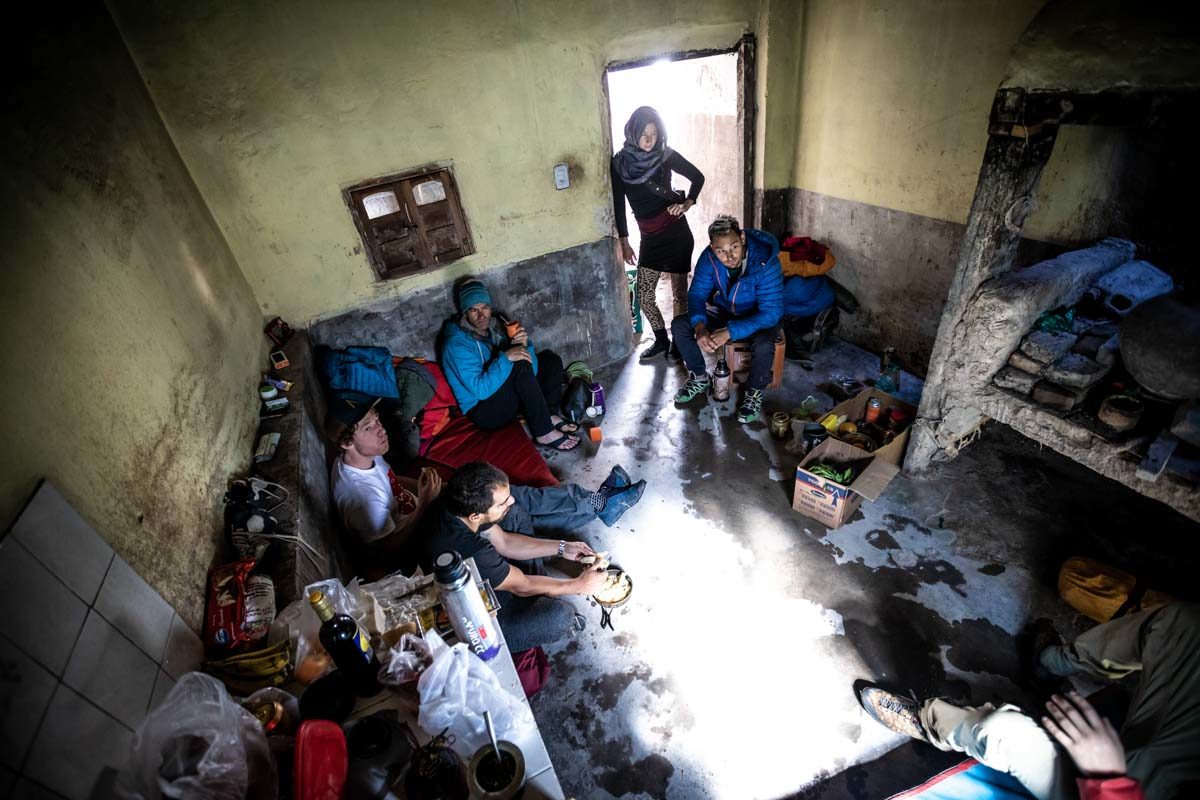 Breakfast with our legendary hosts: Nacho and Carlitos.

The small dungeon of a climbing cave was home to a brilliant community. We met Carlitos Torino and Ignacio Karlen Nachele (Nacho for short), who were some of the only people to have climbed technical terrain in Chani. They had all the beta we needed and we wouldn’t have been able to do the trip without them. They drove us two hours to meet a local family that have donkeys in the area and we met Patricio, our donkey driver. Patricio said he needed several days to walk multiple valleys in order to find his animals. Truly free–range donkeys. Time was ticking, but we couldn’t force things and took it in stride. 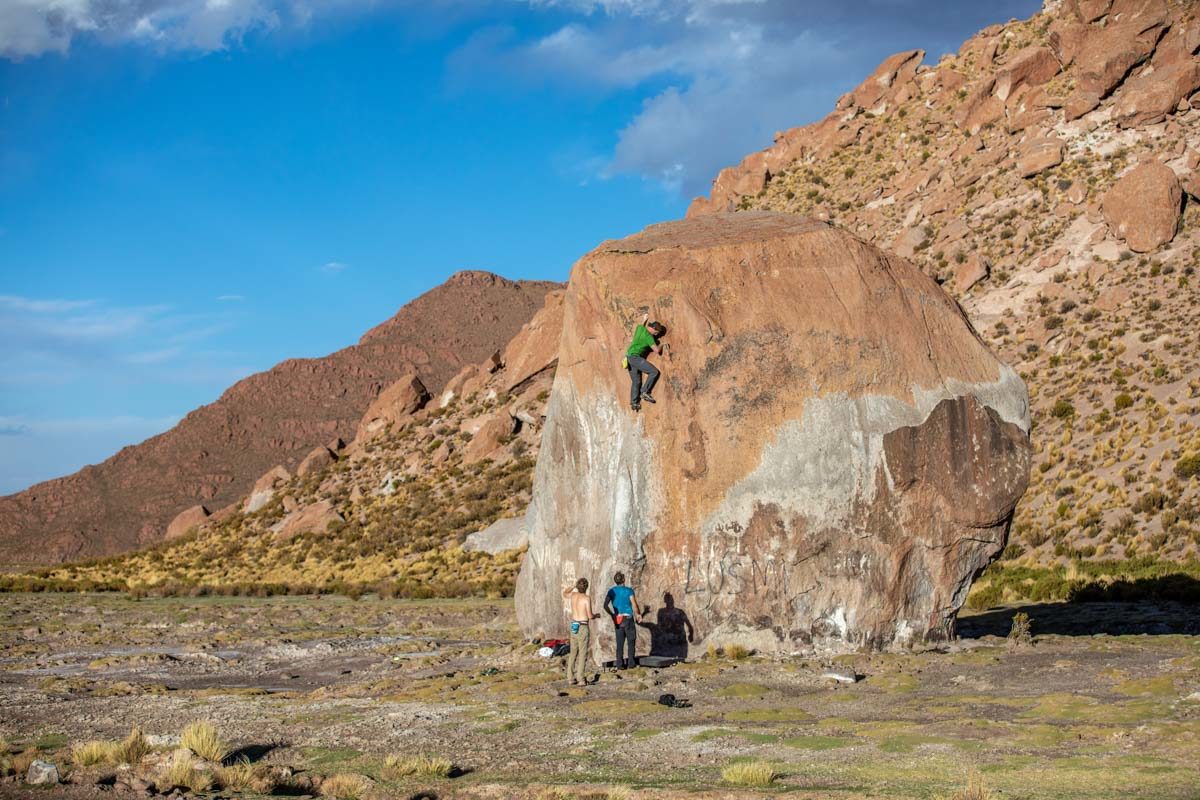 Bouldering at 4000m in Tuzgle. 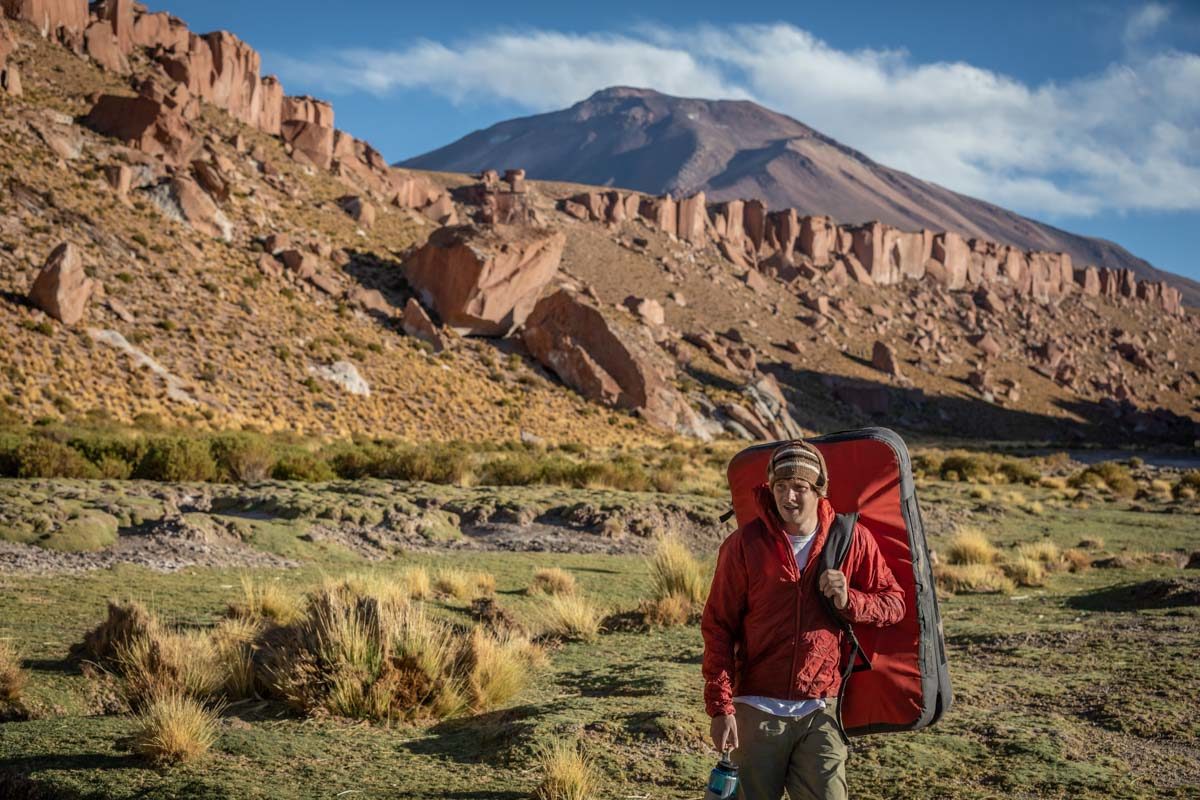 Given that we had a week waiting for Patricio to find his donkeys, we decided to get cramped in a small rental car and drive to Tuscle, a relatively new and untouched destination. At 4000m it sounded like a great place to prepare for altitude, and also get some climbing in. It turned out to be amazing despite the hazy fog we were experiencing as a result of the sudden elevation change. We climbed splitter cracks, high boulders and a small unclimbed tower.

We seriously considered staying in Tuscle for the remainder of the trip, tempted by the ease of access and incredible rock. There was a huge amount of potential there. Phenomenal bouldering in the valley, and Indian Creek style splitters on the rim. Unfortunately, we didn’t have much time there as we had to return (fingers crossed) to our donkeys and hike in to Chani. Altogether a wonderful mini adventure that left us hungry for more! 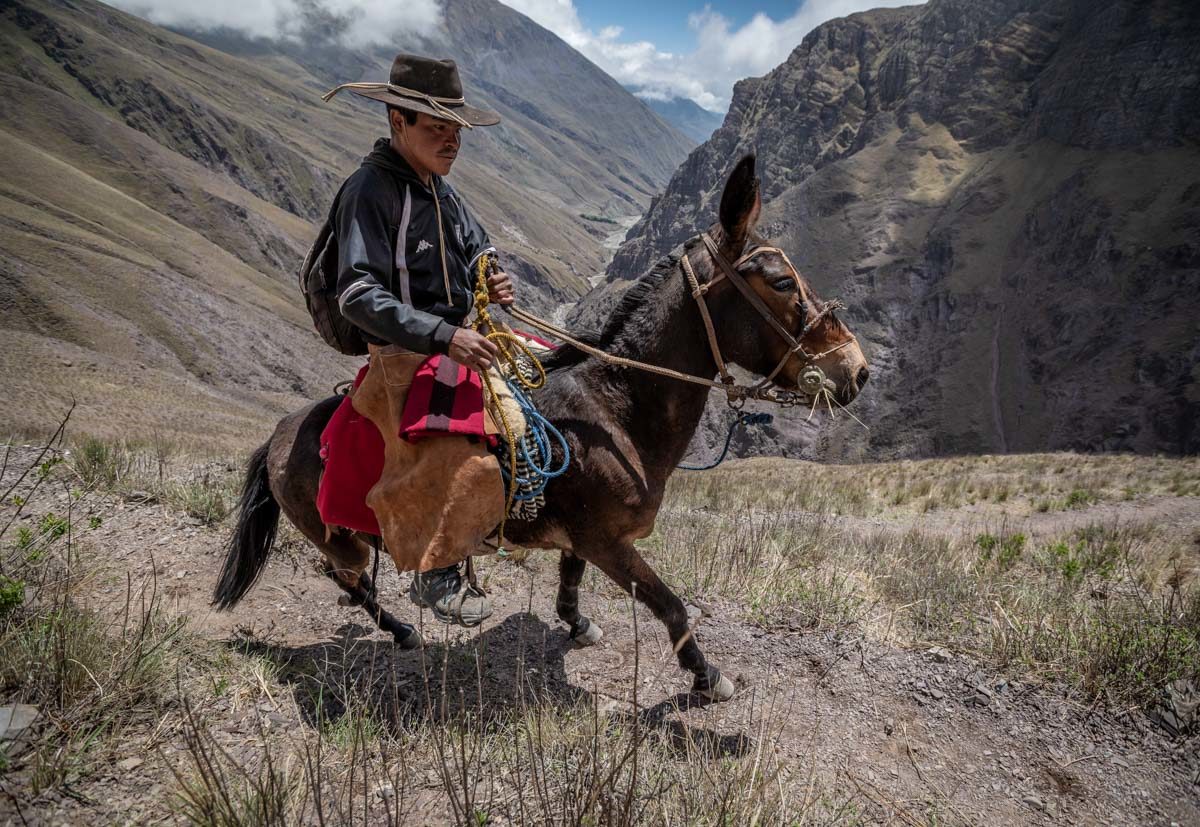 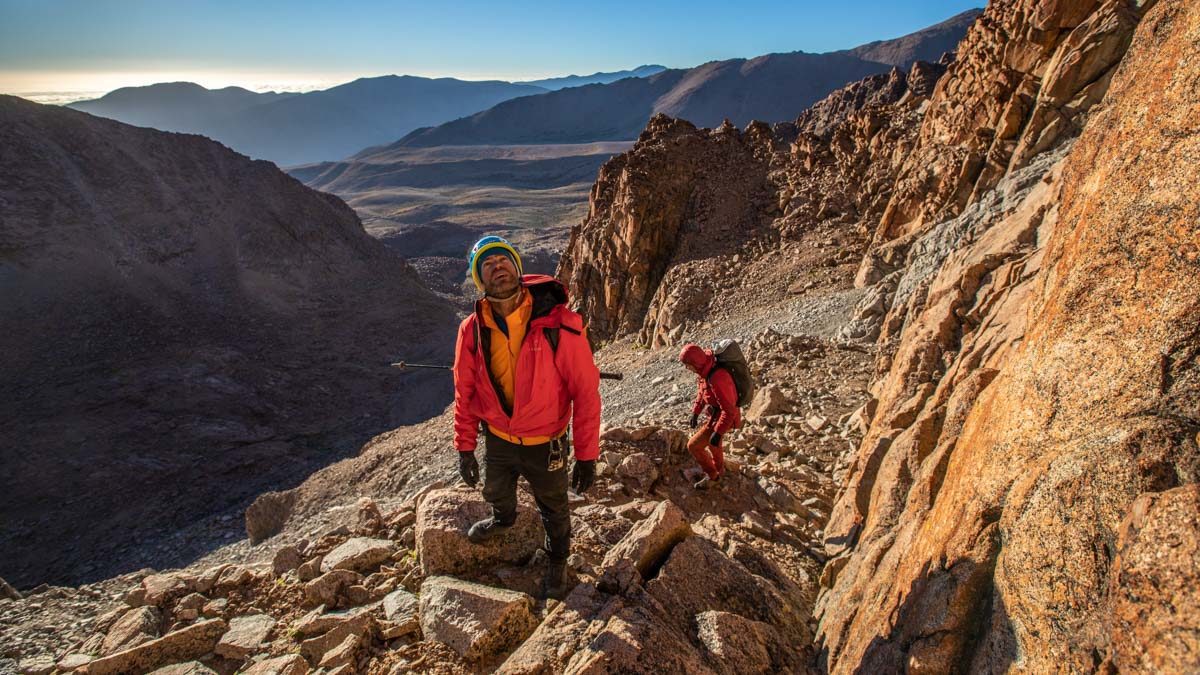 Paul and Will on the approach.

The donkeys were ready! Although Patricio had only found five out of six. We left Patricio’s house with light packs while the donkeys carried our heavy loads. We got to the old army refuge after two days of trekking. “It’s like Pakistan just drier and more rugged” were Paul’s words upon our arrival. Although not overly high, we certainly noticed the effects of altitude. We were all fired up to get after it, but had to settle with a recon mission so as not to tax our bodies too heavily while acclimatizing.

We started by climbing an unclimbed buttress we called “El Viejo (Old Man)” after a feature on the wall that looks like an old man guarding the valley and taller spires behind. We climbed aiming for a wonderful looking splitter on the old man’s forehead that we climbed at 6a. It was so wonderful to be jamming golden splitters and a perfect mellow objective for the first day. On the return home, we spotted a cool looking finger crack that we vowed to return to. It turned out to be really fun, varied climbing. “54-46 Es Mi Numero – 7c” 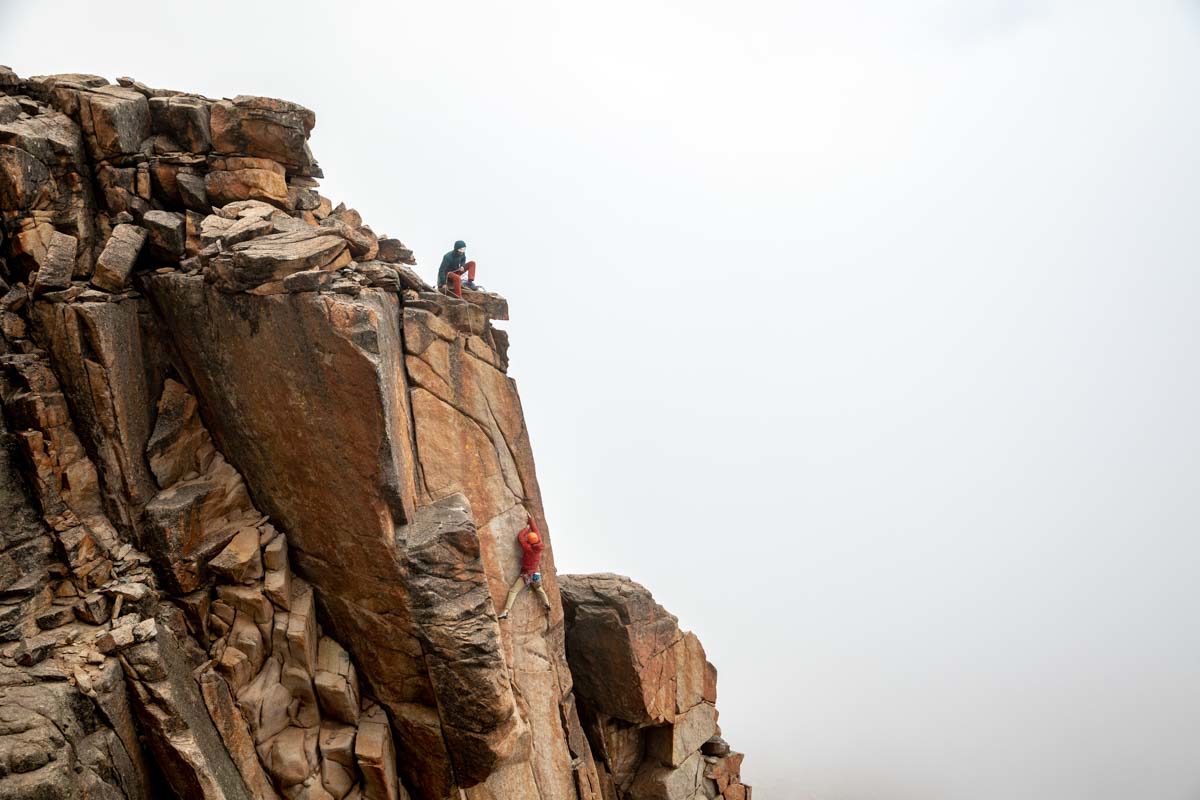 Quentin and Will exploring one of the many cool splitters in the zone. “54-46 Es Mi Numero – 7C” FFA Will Stanhope

The next days brought rain and snow. We were forced to hunker down which was good for acclimatizing, but was hard on morale. The hut was dark, dank and cramped with a few too many critters scurrying around. Paul managed to lift team spirits with some fine alpine cooking. These are two worthy recipes that everyone should have up their sleeves for times like this! 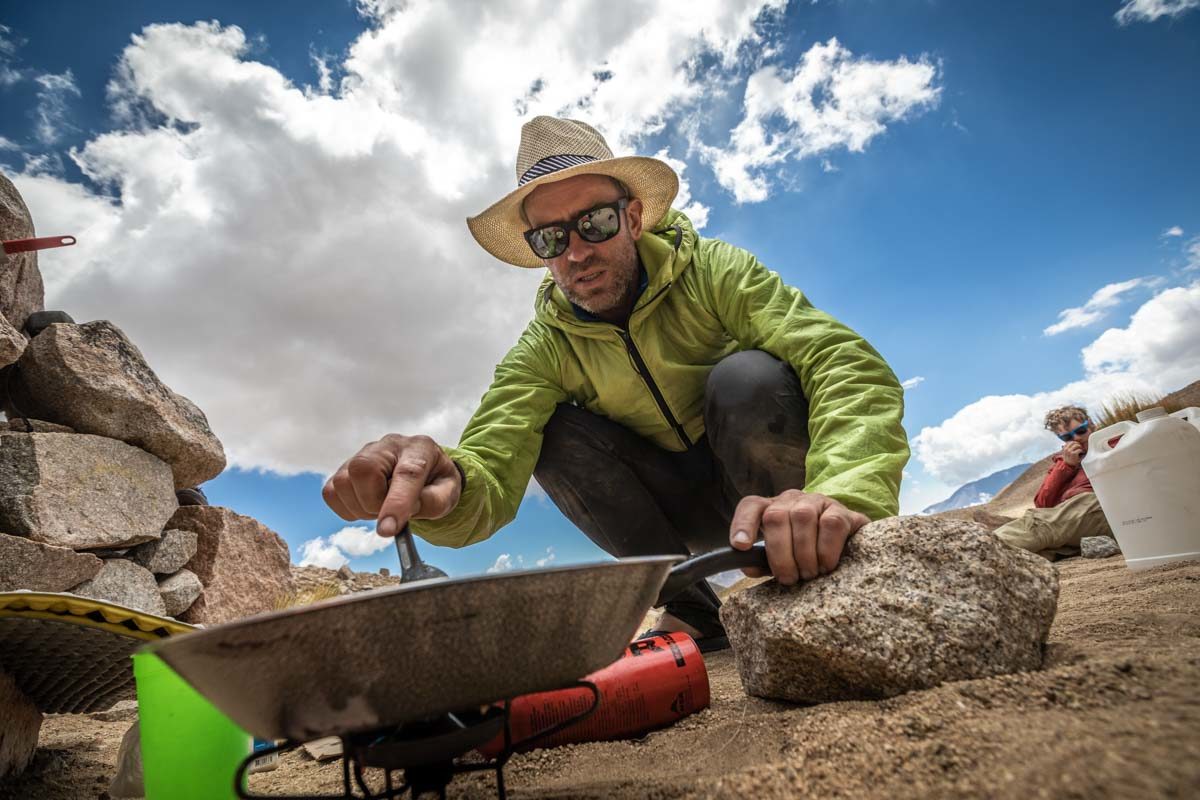 Paul cooks french fries outside during a small break in the weather.

As soon as the weather cleared, we ventured off to climb several wonderful new pitches to the top of a beautiful looking spire that we named Aguja Marc Andrés after our great friend. It was so special to be able to look at these mountains and pick the finest lines we could see. Not only were the lines we looked at unclimbed, but often the spires themselves as well. Our climbing was holding true to Will’s words on the approach “Let’s just go in there and send the sickest thing that we can see. Bonus if it hasn’t been climbed. Pretty simple really!” 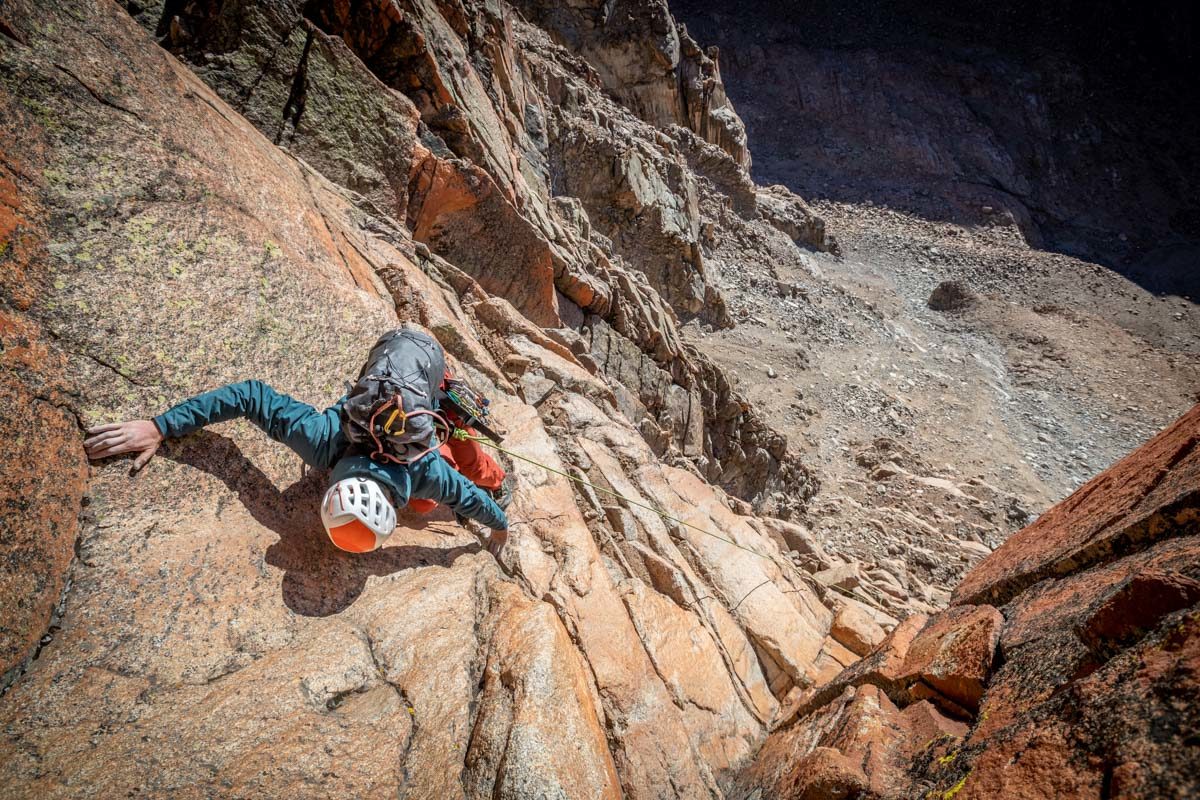 Every day the high–pressure systems from the other side of the mountain range would battle the wet systems from the forested valley below. On bad weather days the wet systems would win and we would be enshrouded in cloud and snow. The later that happened the better. We would watch the cloud bank approach and it would usually cover our basecamp by mid-afternoon. We had to be back in familiar terrain before the weather came in. 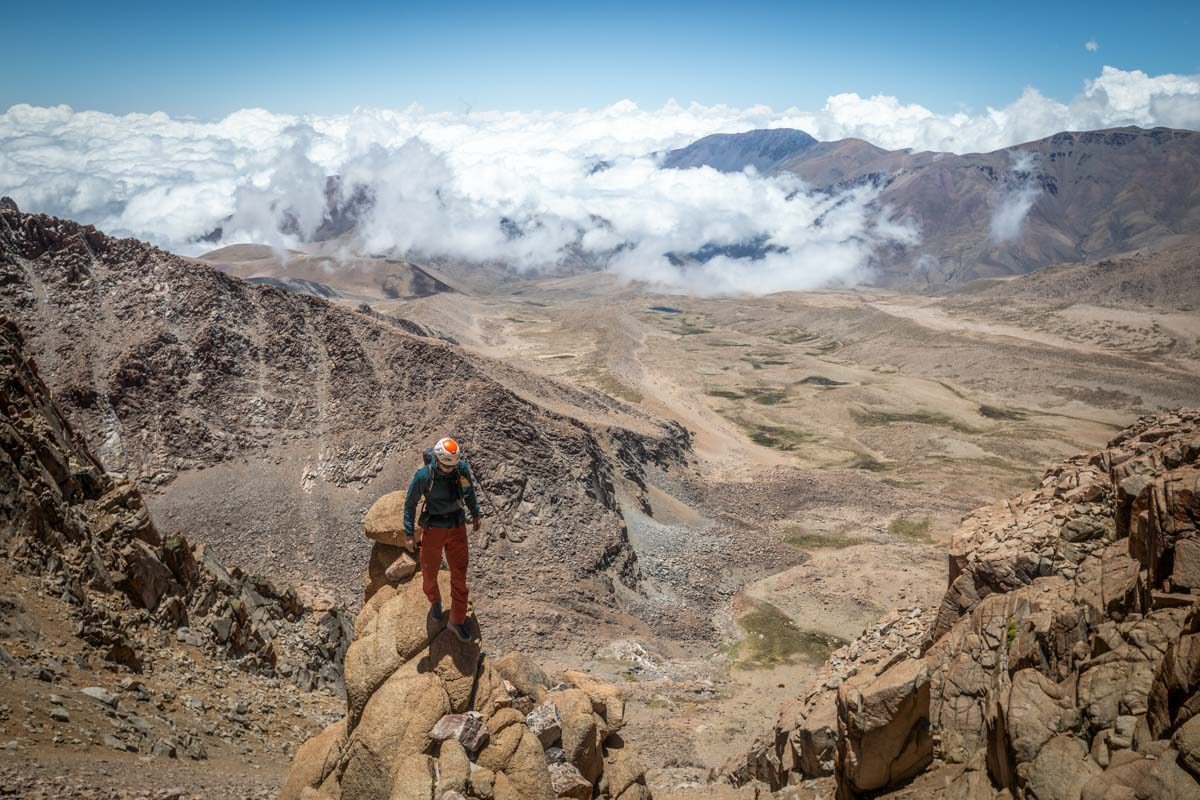 We had one main objective for the trip and that was to climb an obvious headwall on Aguja Intihuasi. It looked like the cleanest rock in the entire range and so called to us. We picked a day of wonderful weather and climbed pitch after pitch of fantastic rock. The route finished with some low fifth class scrambling to the top of the spire on perfect granite. Then a short section of choss to the main summit. From the top we had incredible views of the salt flats thousands of meters below. I’ve never seen anything like it in my life. We didn’t linger long and descended quickly to escape the headaches that were slowly creeping in. Quentin on the central pillar of Aguja Intihuasi.

Our time to leave came all too soon. We managed to return to the finger crack we had spied earlier, “54-46 Es Mi Numero.” I gave it hell, but missed the send. Will took it down on his second lead go. At least one of us got it! Two days later we were back in town and packing our bags for the return to Canada. We had been in Argentina for just under a month and although we didn’t do what we had originally planned, we did a huge amount of exploring in that time. We checked out new areas, climbed new routes, ate new food, and made great new friends. Descending one of the many choss gullies through the fog.

It’s often really hard to find this kind of adventure today. Everything is so well laid out in guidebooks or available online. We had so little idea about what was coming our way, and spent a lot of time not climbing figuring it out. In the process we met people we otherwise wouldn’t have met, saw places we wouldn’t have seen, and experienced a whole lot more than otherwise. We also still managed to put up plenty of new routes, and climb lots of new terrain in a unique part of the world. I highly recommend a trip to Chani for the well–rounded experience. From approaching on ancient Incan trails with guanacos running around, to sending untouched splitter granite cracks above 5000m, El Nevada de Chani is well worth a visit. 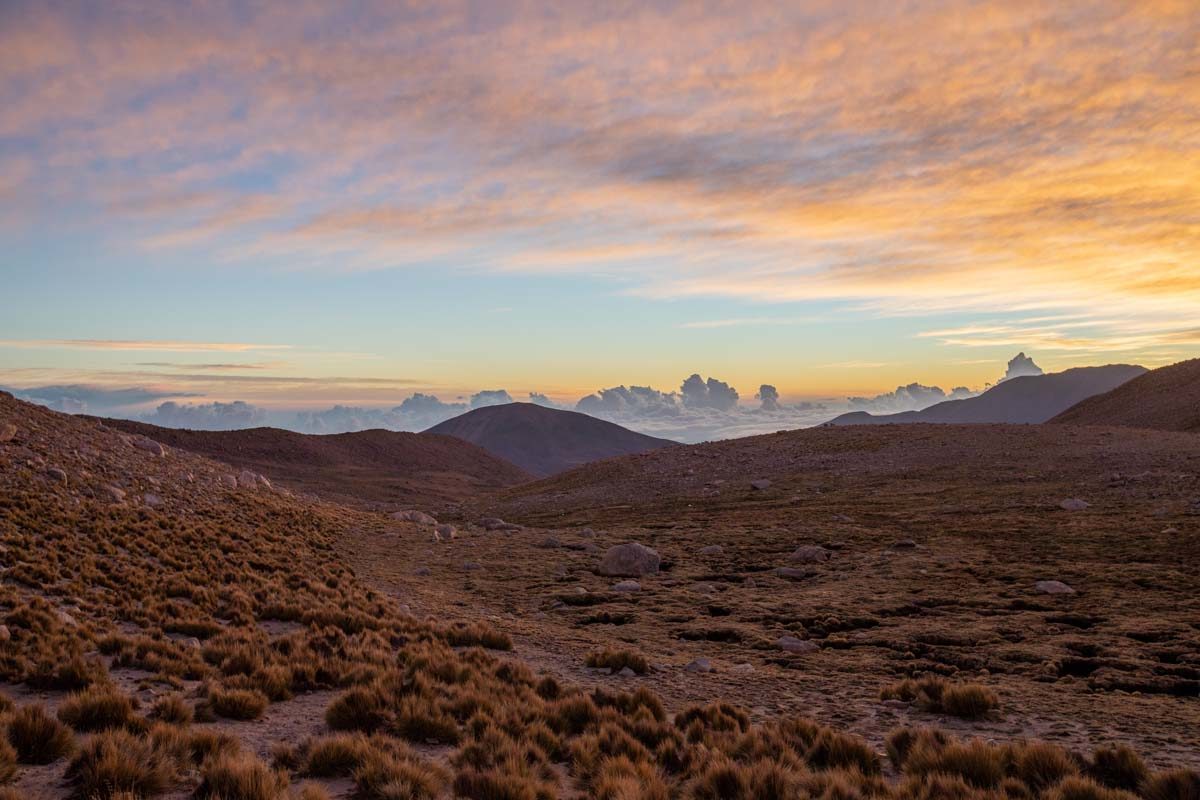