James Bradley is an Environmental Scientist at Queen Mary University of London. James studies the exchange of carbon between various components of the Earth system, including the atmosphere, soils, and the ocean. His research brings him to some of the most extreme environments on Earth – including the glaciers and ice sheets of the Arctic and Antarctic. In Svalbard, he studies microorganisms in soils and ice to better understand how sensitive habitats such as permafrost and glaciers are vulnerable to climate change.

Deep inside the Arctic Circle and only 500 miles from the North Pole at its most northerly point, Svalbard is an ice-covered archipelago known for its majestic polar bears, breath-taking landscapes, and spectacular northern lights displays. Fractured glaciers, seas of flowing ice, crumpled and jagged folds of mountains, and sharp ice cliffs surround me. My eyes are dazzled by a stunningly bright colour palette, made up of blues and pinks, with a blanket of white snow covering everything but the steepest rocky outcrops and the deep blue fjords. At 79 degrees north, we are truly at the edge of the map. We sail from Longyearbyen (Svalbard’s largest settlement of just upwards of 2,000 people) on board a 51-foot expedition vessel, the MS Farm, breaking through a thin crust of sea ice as we travel northward up the western coast of Spitsbergen. 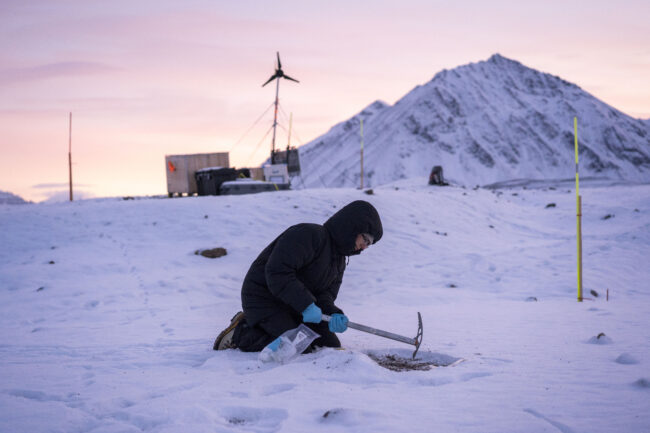 Finally making landfall in Ny-Ålesund, we arrive one week after the return of the sun – which can once again be seen above the mountain tops after four months of darkness. Ny-Ålesund – once a mining town and now an international hub for science – is home to around 100 researchers and permanent inhabitants. It is one of Svalbard’s few permanent settlements. Despite several years of expeditions in the Arctic, I am always blown away by a powerful sentiment of vast emptiness.

“One third of all of the Earth’s soil carbon is stored in frozen permafrost – totaling around 1,500 billion metric tons.”

We are in Svalbard to study frozen soils known as permafrost. Permafrost is ground that is frozen for at least two consecutive years. It covers roughly one-quarter of the total land area in the Northern Hemisphere, including large portions of North America, Siberia, and the Tibetan Plateau, and is an enormous reservoir of carbon. In fact, a third of all of the Earth’s soil carbon is stored in frozen permafrost – totaling around 1,500 billion metric tons. This is twice the amount of carbon that is present in Earth’s atmosphere. We want to understand what happens to permafrost soils, and this carbon, as the warming of Earth’s polar regions causes them to thaw.

Soils – even frozen soils – are an important habitat for sustaining life. A typical spoonful of soil contains literally billions of microorganisms. When permafrost thaws due to climate change, the microorganisms contained in permafrost will gain access to liquid water for the first time in thousands of years. We suspect that these microorganisms – which are currently frozen in a state of suspended animation – will ‘wake up’ and begin to consume ancient soil carbon as a source of energy. In turn, they will produce greenhouse gasses including carbon dioxide and methane as waste products. This is important – because if these gasses escape into the atmosphere, they can contribute to further climate warming. Scientific instruments monitoring our study site have recorded a warming trend in the soil of almost 1°C every four years. We suspect that the more permafrost that thaws, the more soil carbon will be available for microorganisms, and the more this carbon is transformed into greenhouse gasses. 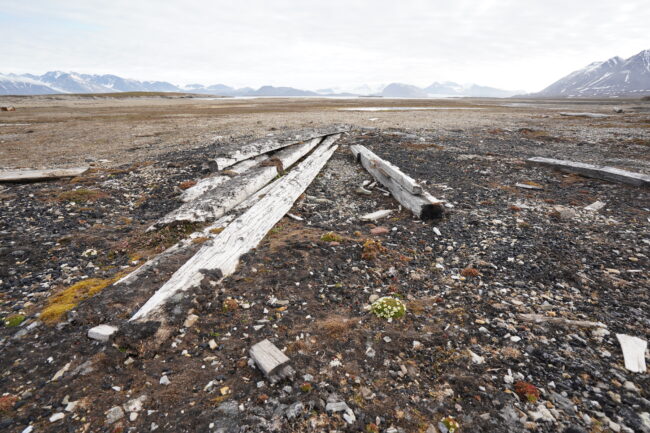 Understanding the microbial contribution to greenhouse gas emissions from thawing permafrost is therefore critical – and we hope that our work in Svalbard will help climate modelers make better predictions of how much future climate warming can be expected.

Our team comprises geophysicists, microbiologists, geochemists, and modelers from all over the world, with a wide range of expertise and experience working on glaciers and mountain ranges from the Andes to Antarctica. During this expedition, we drill into the frozen ground using specialized equipment including a steel drilling rig and sterile tools. We are drilling in order to deploy instruments that will help us measure how climate change is affecting the region, and collect samples of soil which will be analyzed to understand its biological and chemical composition. 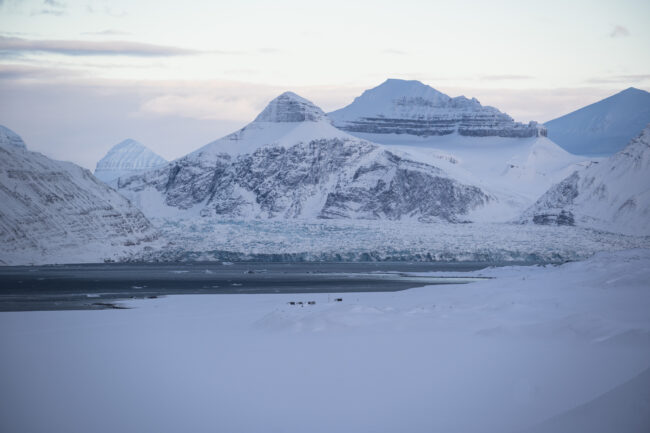 Drilling into permafrost is no easy task: perilous snow-scooter rides over uneven terrain, maneuvering heavy machinery in whiteout conditions, drilling sites that are strewn with rocks and boulders, stuck or sometimes broken drilling rods. All the while, battling gale force winds and freezing fingertips whilst in the field, and avalanche evacuations and logistical challenges whilst in town.

When we drill into frozen permafrost, we are drilling back in time. The carbon locked up in these soils originates from remains of ancient plants and animals that have been undisturbed for many thousands (and in some places, millions) of years. Now, under the influence of climate change, these frozen tombs are thawing and the vast store of stable frozen carbon is threatened. Back in our home laboratories, we are carrying out experiments to monitor greenhouse gas production from frozen soil samples, and also extracting the DNA of microorganisms contained within the soil to better understand how they produce these climate-warming gasses. 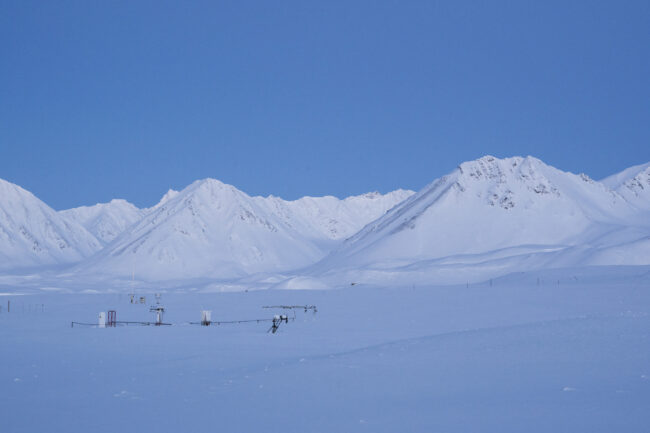 The thawing of ancient permafrost is not just a climate-change amplifier – it also presents a direct threat to the animal and human inhabitants of high latitude regions. As permafrost thaws and the solid ice within the ground melts away, soils are destabilized and landscapes can be vulnerable to rapid changes. The continual transformation of landscapes has changed the distribution and quality of water in rivers and lakes, even affecting the daily movements and seasonal migrations of wild animals. Here in Ny-Ålesund, the service building – which houses us for meals and provides the main logistical hub for all science activities – was urgently decommissioned after its foundations began sinking into the thawing ground. The building has since reopened following repair work that spanned over a year. It’s one thing to study permafrost thaw in the fastest warming region of the planet. But when the infrastructure we rely on to carry out our research is collapsing due to the very phenomenon we are here to study – this is a wake-up call like no other.

The Arctic is a beautiful but unforgiving environment. Climate change is an ever-felt presence here at the top of the world, and whilst the Arctic is the first to feel its impacts, the rest of the world waits perilously in the firing line.