In 2011, a kid from Banff showed up at the Freeride World Tour event in Revelstoke, British Columbia, won the ski qualifiers, and smoothly snatched the second place podium finish in the finals out from under the more experienced competitors. It wasn’t a bad showing for a girl who, despite a family lineage of passionate, professional skiers and guides, had refused to ski until she was 12 (she previously preferred snowboarding, even though her dad had made her pay for her own board).

Since then, Tatum Monod has been busy making up for lost time. Now 28 and a professional freeskier for almost a decade, she is a recent addition to the Arc’teryx athlete team, along with her other major sponsors Red Bull, Oakley, Rossignol, Yeti, Ski-Doo and the family ski shop, Monod Sports. Tatum’s story plainly shows that even if you get a late start, and even if you weren’t aware a successful career can be built from freeskiing (something Tatum didn’t believe at the start), hard work and dedication to a passion can open the door to a flourishing future.

Tatum caught the attention of the ski industry that same winter of 2011/12, signing with her very first sponsor, Orage. It wasn’t just the ability to charge big mountain lines but to mix it up with tricks, like a backflip, or a double backflip, for example. “People could see what I’m doing as a lucky dream job, but there’s been a lot of sacrifice,” she said. That includes working hard physically to handle the skiing but also putting herself out there on the business end and asking for the opportunities, and then delivering exceptional skiing, on film or otherwise.

This focused drive to pursue freeskiing at the highest level has kept the accomplishments rolling in, with ski movie segments, high profile sponsorships, awards, and expanding opportunities. Her career hit a bump in 2017 in the form of nearly two years of downtime after a severe knee injury in Alaska, where an air onto steep glacial ice masquerading as powder sent her tomahawking for a thousand feet. The trauma from the fall severely compromised or destroyed all major structures in her knee. “It was life-changing, really,” says Tatum, but she’s quick to point out in the end, it has been positive, and the repair and rehabilitation work became a growth experience both physically and mentally.

“Now, I really know the value of hard work, and my first season fully back on skis I was skiing better than I ever had. That was one of the best accomplishments of my career, to come back at an even higher level,” she said. However, she also took some of that down time to think about other interests in life, including her long standing and serious interest in the arts and technical design. 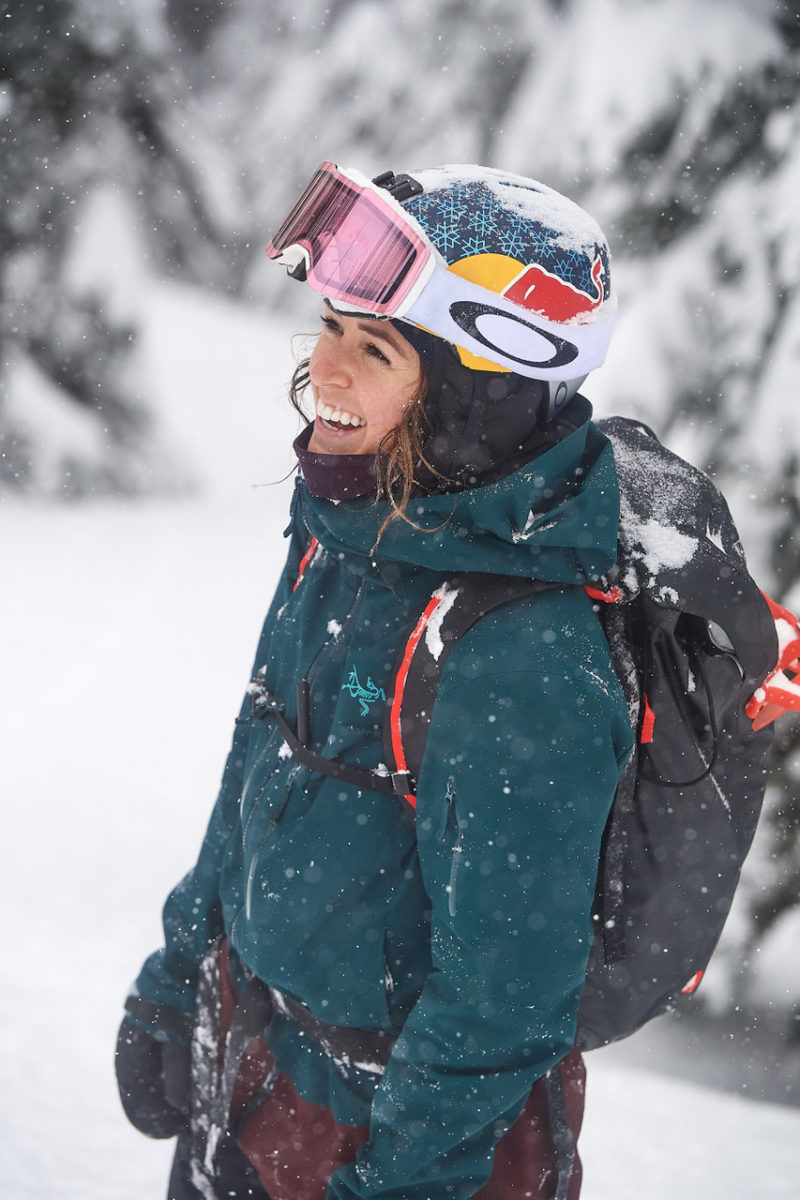 “I went to school in Salt Lake City for a while, where I studied technical design, but my ski career became overwhelming,” she says, and so at the time she put formal school down to fully dedicate her time to skiing. However, the new affiliation with Arc’teryx has Tatum stoked for more than just the company’s support of her skiing. She anticipates putting in her time learning from and contributing to the work of the in-house designers on freeskiing gear.

“I think I’ll have a lot of opportunity to work with the design team, and I think it’s going to be really mutually beneficial using the products,” said Tatum. “Getting deep into that function combined with fashion element, and the creation of something that looks good, and tailored, but is articulated, and high performance when you need it is what really excites me about design. So being able to work hands on with a team that values my opinion and feedback is an epic opportunity.”

Moving forward on the snow, Tatum’s biggest undertaking for this season and at the moment is a film project to explore her roots and her family connection to skiing and the mountains. “I will retrace my roots, starting with my grandfather who was a Swiss mountain guide and lived in Chamonix, and then with my aunt, my two uncles, and my father who were all professional skiers and on the Canadian ski team,” she said.

“This sport and the passion is my blood, it is in my genetics, and it’s awesome to have the opportunity to tell this story of my family. My ultimate goal in this career is to inspire people to get outside, to live their passion. Skiing’s given me so much, I just want to pass it on to others.”

Meet Tatum at this year’s Arc’teryx Backcountry Academy in Jackson Hole, WY, February 6 – 9, 2020. You can check out the full schedule of events HERE.