Professional skier Eric Hjorleifson (Hoji) lives in Whistler, BC by way of Canmore, AB where he grew up and began skiing. He has been pushing skiing and ski gear to new levels and has called it a job for the past 10 years. Filming with the likes of MSP, Sherpas Cinema, Field Productions and Sweetgrass Productions is enough to keep anyone busy. Include all the hours spent building up skis, boot and bindings while playing the role of ski tech for friends and suddenly a 24 hour workday becomes commonplace.

Between trips and heading home for a visit, I was able to convince Hoji to meet up with me to talk about last winter and some of the fruits of his labour. A few highlights include Hoji recently landing the cover of Powder Magazine’s Photo Annual, Powder Awards ‘Photo Of The Year’, a feature in Ski Journal and playing a big part of Sweetgrass’ ‘Afterglow’ video project. When you talk to him about it all he is very humble and shares credit with the hardworking, dedicated people involved.

Here is little bit of what we talked about over some of Whistler’s finest eggs and bacon. 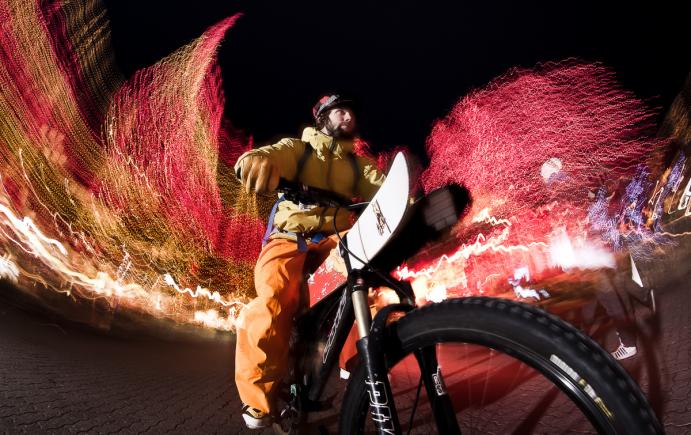 Me: Thanks for agreeing to eat breakfast with me. You seem to be on the road regularly? What’s been going on this winter so far?

Hoji: I was at Golden Alpine Holidays’ Sentry Lodge for about two weeks(before Christmas) doing some alpine ski camps I have been involved with for a few years. Was out there with Matty Richard, who was coaching as well this year. We ran two camps at the same time so I worked the one at Sentry Lodge and Matty worked from Sunrise Lodge. Both lodges are part of Golden Alpine Holidays which is one of my favourite places to ski.

Me: While you were away, Powder Magazine announced you had just landed the cover of Powder Mag’s Photo Annual with Oskar’s(Enander) photo of you during ‘Afterglow’. When I texted you to meet up for a short interview, I guess you hadn’t heard yet? Do they tell you this stuff before it happens?

Hoji: Well, no. I actually had no idea because I was at the Powder Awards a few days before I left for the lodge. I had gone down to 4FRNT in Salt Lake to build some skis and attend the awards because they had hinted I should be there. They asked a bunch of industry people and ski athletes to vote for videos prior to the event so I did all that and then they invited me down. We ended up winning the photo of the year for a shot taken during the night shoot for Sweetgrass’ Afterglow Philips media project. That was really cool.

But yeah, I didn’t really know that photo was going to be on the cover as well. (Heh heh) I went straight from the awards right into the lodge and then got your text while I was out there. I started looking around online and saw that 4FRNT had tagged me and then saw all the other posts… that was really cool. Big surprise. 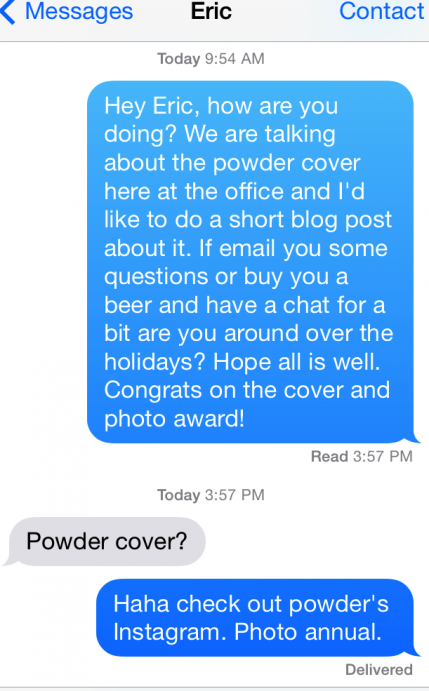 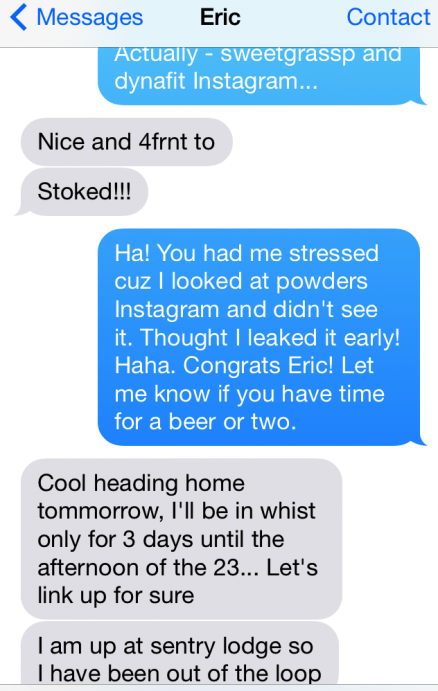 Me: You also had a pretty big spread in The Ski Journal. When did that go down?

Hoji: Yeah, Sakeus Bankson (Editor of Ski Journal) came up last spring right before I left for Golden Alpine Holidays to start filming with Sweetgrass. The 4FRNT guys were in town and we were trying to film some stuff in the backcountry around Whistler. Sakeus was with us for a few of those days and it was a super busy time for me. I had just gotten back from Europe, had some boots I needed to work on and a few of my friends had gear in shambles as well. I was working on their gear every night and then working on my stuff. I wanted to make sure the interview worked out so I spent a couple all-nighters in my shop before heading out with Sakeus each morning.

We would come back after a few laps, (at Whistler Blackcomb) go meet the film crew and then film for the rest of the day. I think he got a really good look at my life. As soon as we finished filming I pinned it straight into Sentry Lodge for the Sweetgrass shoot where that cover photo was taken. 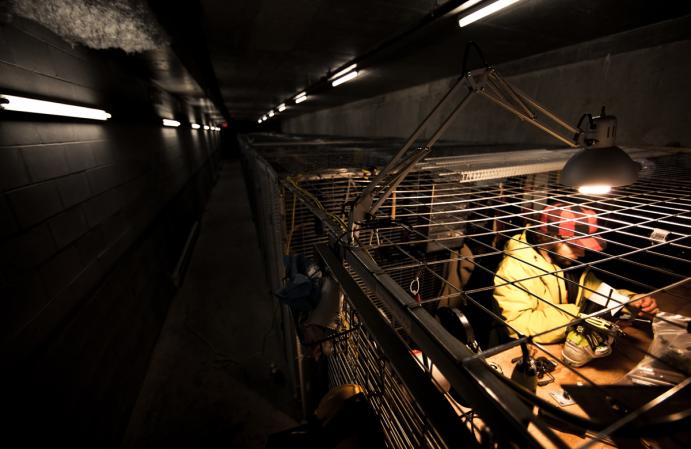 Me: That night shoot… That must have taken some time to dial?

Hoji: Yeah, every night for two weeks. It was intense work because we had to move all the equipment with this old massive Scandic snowmobile. It was super helpful but eventually it kind of blow up and was unfixable. The whole second week of the trip was by manpower – moving all the lights, generators and gear ourselves. A huge team effort!

Me: Why did they decide to shoot at Sentry?

Hoji: I’ve been going there for years with ski camps and different film crews. The Sweetgrass guys had been there a few years prior for a Dynafit project and they really liked that zone. It is a super productive place for shooting.

Me: That kit you had on, was that one of our jackets stitched or something with all those LED’s?

Hoji: Yeah, that’s a funny story actually. It’s probably a $10,000 suit after everything it took to get it there. My brand new pants and jacket were unrecognizable after Sweetgrass sent it this guy in the US who built the light suits for Pep (Fujas) and I. Pep had his right from the start of the trip, but mine showed up near the end because there were some shipping troubles or something and it was stuck in customs. One of the guys from the crew was on the phone everyday with customs before it was releases and rush shipped to Golden. They had to fly it in on its own heli to the lodge.

Me: Precious cargo. Was it tough to wear? I mean you were already skiing in the dark.

Hoji: I would say the pants and jacket with all the batteries totalled about 40 pounds. It was tough because it was no longer a functional piece of outerwear. All the cuffs were gone, everything was sewn shut and it was covered with these giant LED’s that were stitched on by hand with fishing line. It was like a sweaty plastic bag filled with holes. Building that could not have been an easy thing to do. It was pretty horrible to wear, but we all made it happen.

Me: Was it a big crew helping out each night during the shoot?

Hoji: Yeah, we had lighting guys from Hollywood, drone pilots for the octocopter and tons of camera guys. The drone guys did a good job of flying at night and some of those aerial shots they got were pretty impressive.

Me: Speaking of great shots, it kind of looks like Oskar’s shot that made the cover was taken from above you.

Hoji: Nope, he was sitting across the little valley we were in. We had planned to ski right to the bottom and do some turns for him. The lines was so far away he couldn’t really get anything from where they were filming so he had to find a different spot. He was about 50 or 60 feet away and was somehow able to snipe that shot. He did a really good job because the whole thing was based on filming and he would never get the lighting he needed. He ended up getting so many good shots anyway. 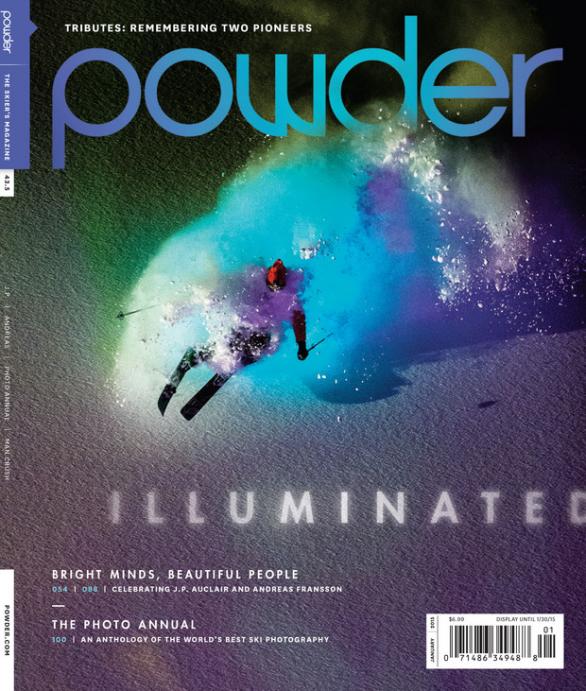 Me: It looks like crazy lighting during the shoot, not just the suit. How was that to ski in?

Hoji: The light suit that I was wearing didn’t arrive until right near the end of the shoot so the shot from the cover is of me wearing an LED panel on my back. It was actually way better than the light suit because the suit was so bright and any snow that kicked-up turned into a blinding white haze. Once the snow dissipated, you were left in a blackout until your eyes adjusted again. The time it takes for your eyes to adjust to the drastic changes in light made it pretty much impossible to see. There were a few times I fully blinded myself and had to stop in my tracks. Pep skied way more in the light suit than me and did an amazing job. 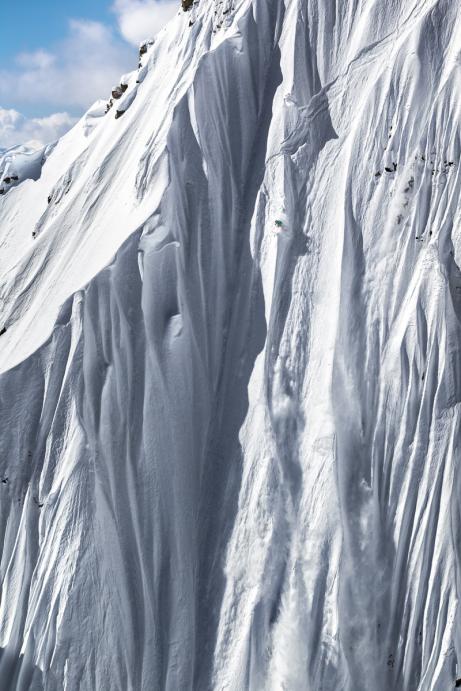 Me: Well, it looks like you all nailed the video and photos. How are you taking it?

Hoji: The honour of ‘Photo of the Year’ and getting the cover of Powder is really awesome because we all worked so hard on the trip. The amount of effort to produce such unique and wild imagery feels good when it pays off as it did. Pretty stoked.

Hoji: Not sure, potentially more filming with Sweetgrass, but they probably need a break after such a crazy project. There might be more with Sherpas Cinema and I have been meaning to talk to the guys at MatchStick because I wouldn’t mind getting on a trip with them.

I am trying to leave my Spring open because I want focus on the this boot project with Dynafit. I might end up missing some ski trips because these boots are a priority for me. There is so much gear to work on – ski, boots, bindings, packs, outerwear – there is a lot do to, that’s for sure.

**That was when we both realized our food was getting cold and the interview was over.

The following day, Hoji was on his way back to Sentry Lodge for a few days of shredding before heading off to…wherever the snow was the deepest.