Over a two day push on April 2 – 3, 2019 the team of Ines Papert, Luka Lindic and Brette Harrington completed the first route to climb the entire East Face of Mt. Fay (3234m) in the Alberta Rockies. As the group of climbers enjoy a day of rest in Canmore, Alberta, they share their thoughts on freeing the 1100m route. Read more below. 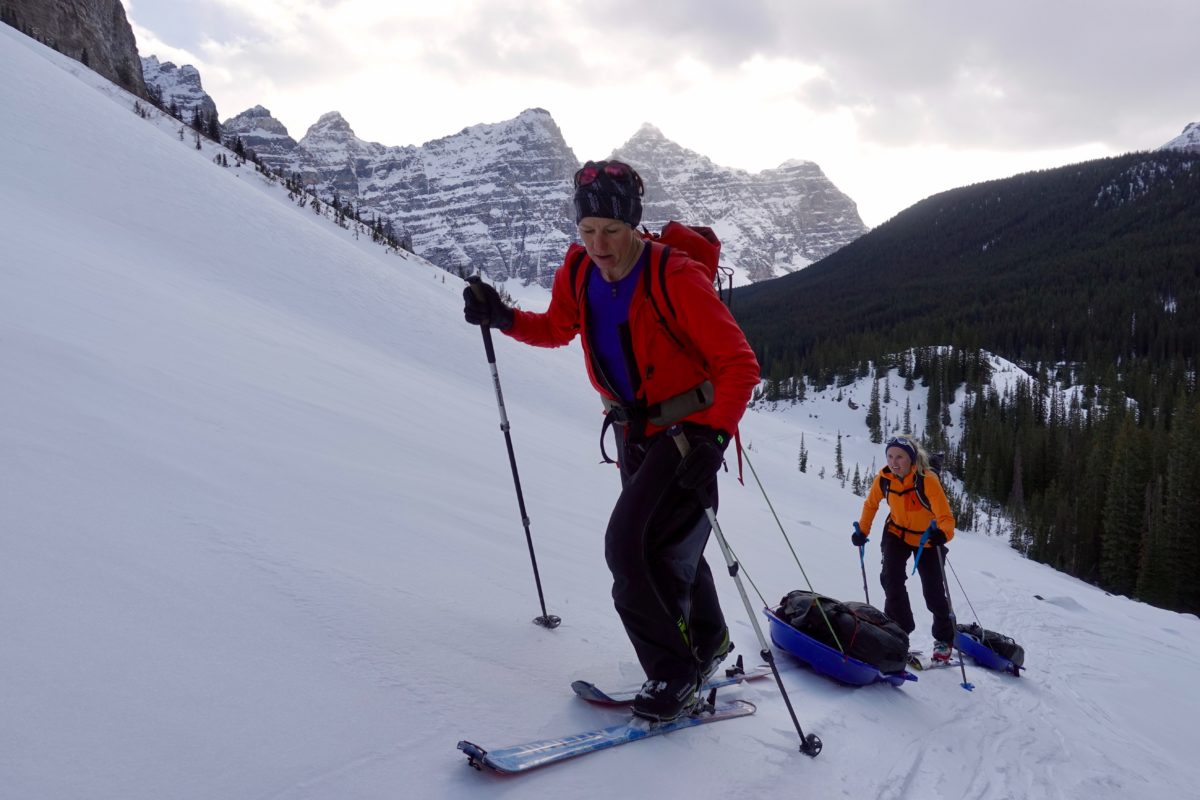 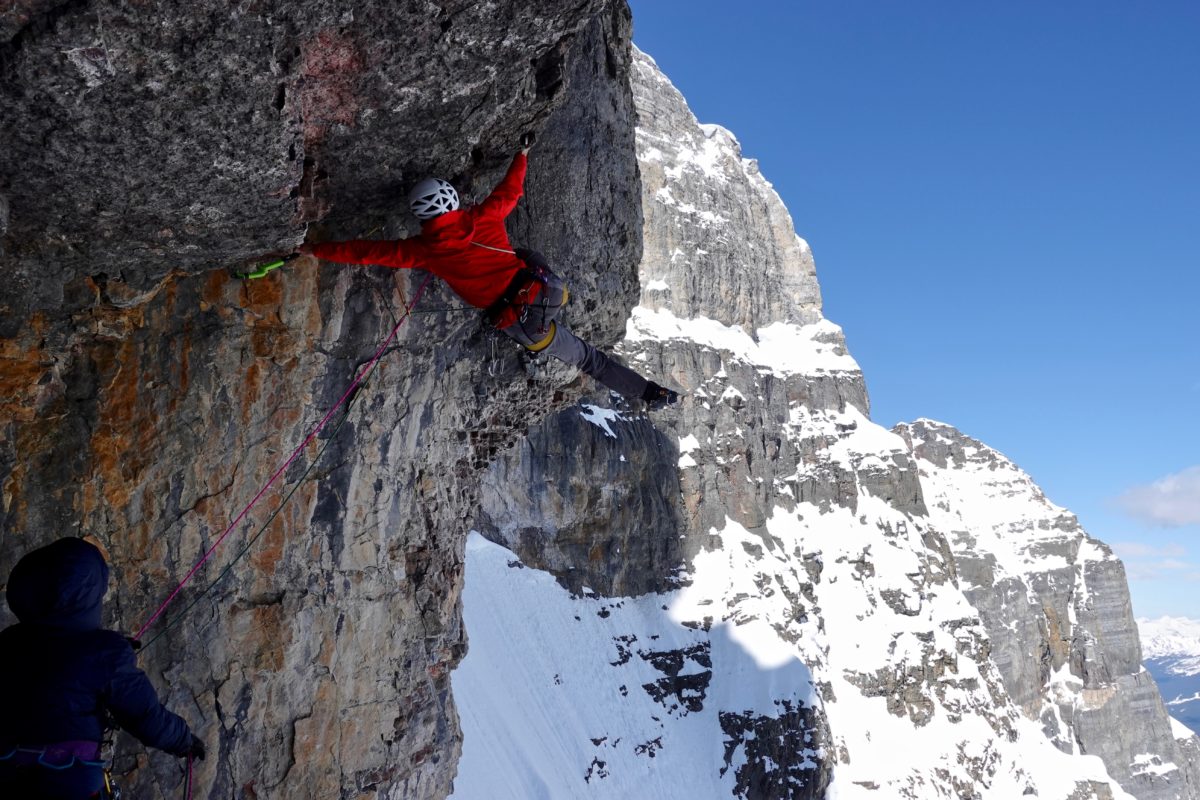 Luka Lindic
April, 2016 – Three years ago, Marc-Andre Leclerc and I woke up at the base of east face of Mt. Fay with the first light to try to climb the first route through the whole wall. The day proved to immediately be too warm as avalanches came roaring down first thing in the morning,  so we packed up and moved on to Mt. Tuzo where we established a difficult new route Lindič-Leclerc. Since that day, Mt. Fay stayed rooted in my mind but unfortunately, I would not able to rope up with Marc Andre again.
April, 2019 – This time around, this time with Ines and Brette, we woke up at 1:30am in the dark of the night. It felt very unusual to head up into the night with two girls to try such a big alpine climb. I knew I would like to do the climb for myself, but somehow even more now that Brette had joined the team and it would be so cool to do what I had tried to do three years prior with Marc Andre. We quickly climbed the first part of the wall following the route from Barry Blanchard, David Cheesmond and Carl Tobin – where they turned right to sneak away from steep headwall because of bad weather, we continued straight up. We climbed some very wild, steep pitches and spent a night somewhere around 250m below the summit. On the second day we needed to fight quite hard to get up sections of the very loose and very steep rock wall. The snow storm that hit us midday only added to the experience. When I climbed the very last overhang to sneak around the cornice I started screaming like hell from pure happiness. Soon, the frozen girls joined me and we screamed from happiness together. I could feel that Marc Andre was with us up there and I couldn’t imagine doing this climb in a better way. 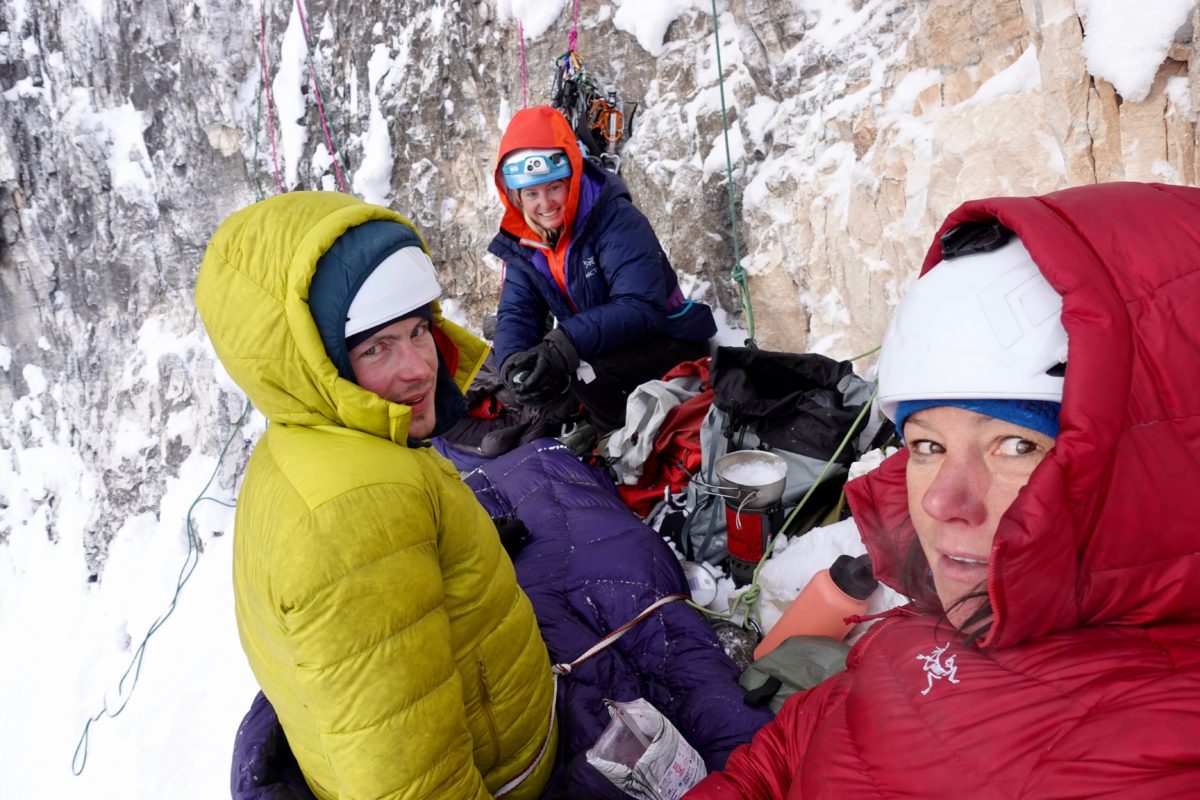 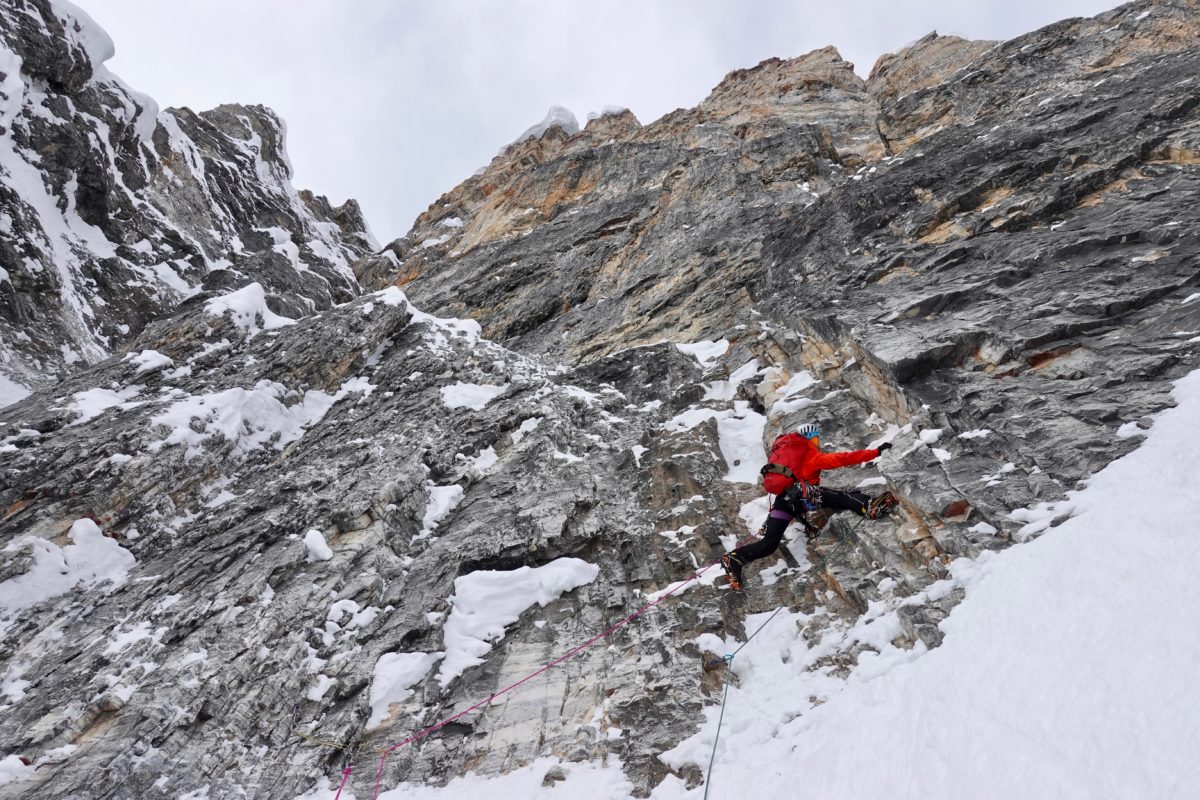 Ines Papert
There has been quite a lack of sleep over the past few days, but high energy and only good vibes between our three person team made the entire climb very powerful. Having Brette with us was what we only could hope for, since we hadn’t seen each other for too long. We shared memories of our late friend Marc Andre all the way up. The climb was very technical and full of difficult terrain to find a weakness through the unknown headwall, which had never been climbed. It was impressive to witness Luka’s skills as an alpine climber, showing off with his tough Slovenian mentality, cruising up the difficult terrain towards the end of the wall and the end of the last day light. He deserves all my respect once again. I know that Brette has a hard time dealing with the cold, so hats off to her for being so tough through the entire route. It’s amazing to see how high her motivation is when sending harder alpine climbs. Motivation is what you need to be able to climb a face like that. 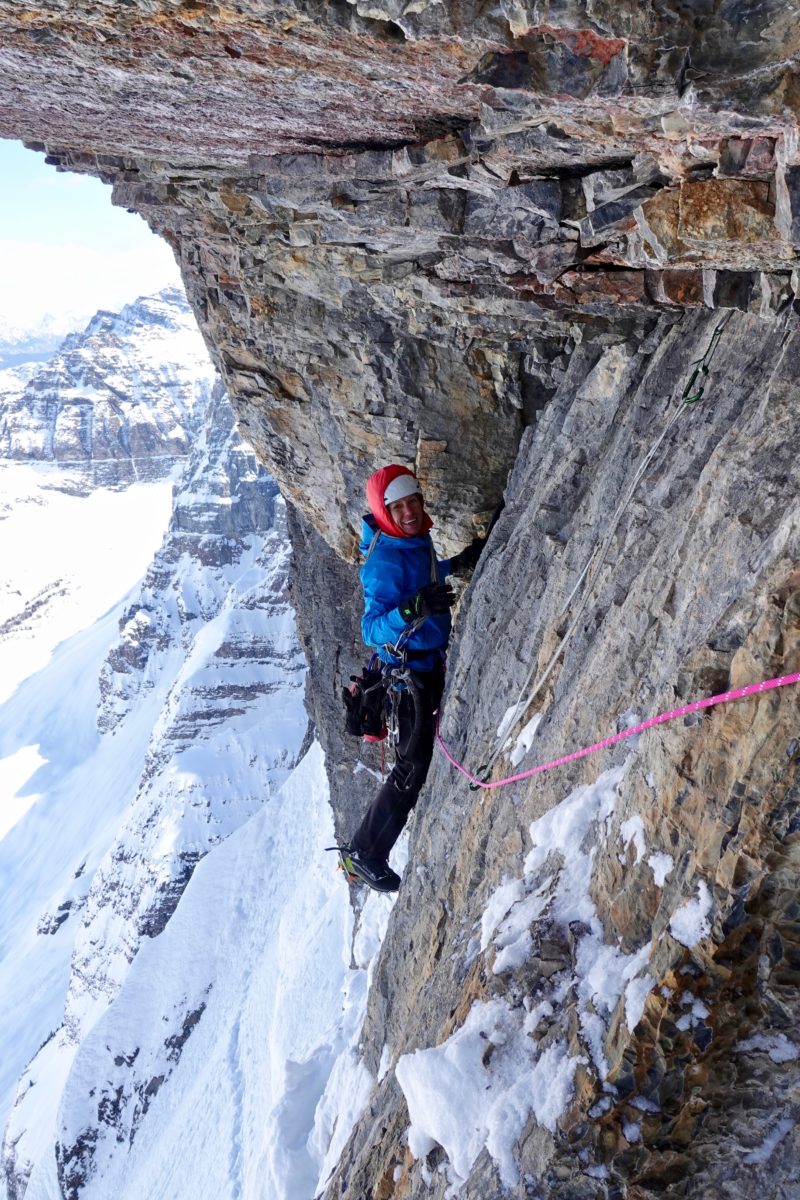 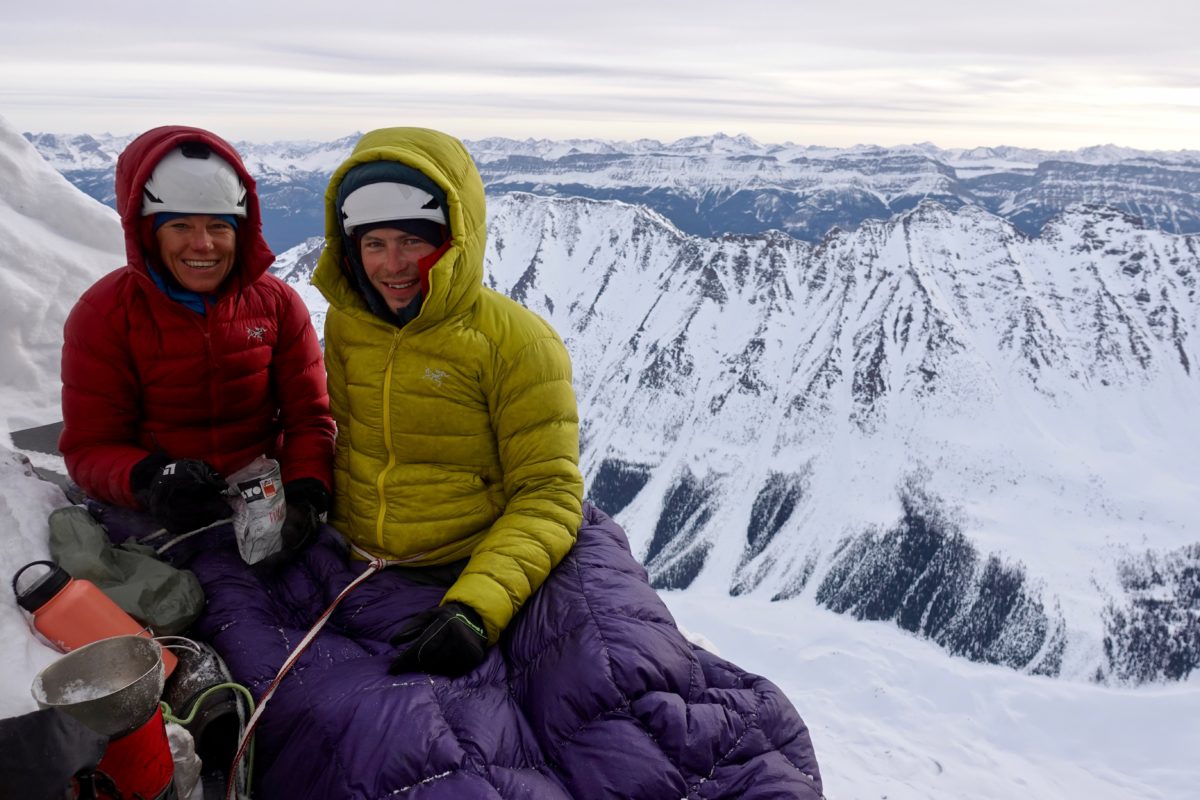 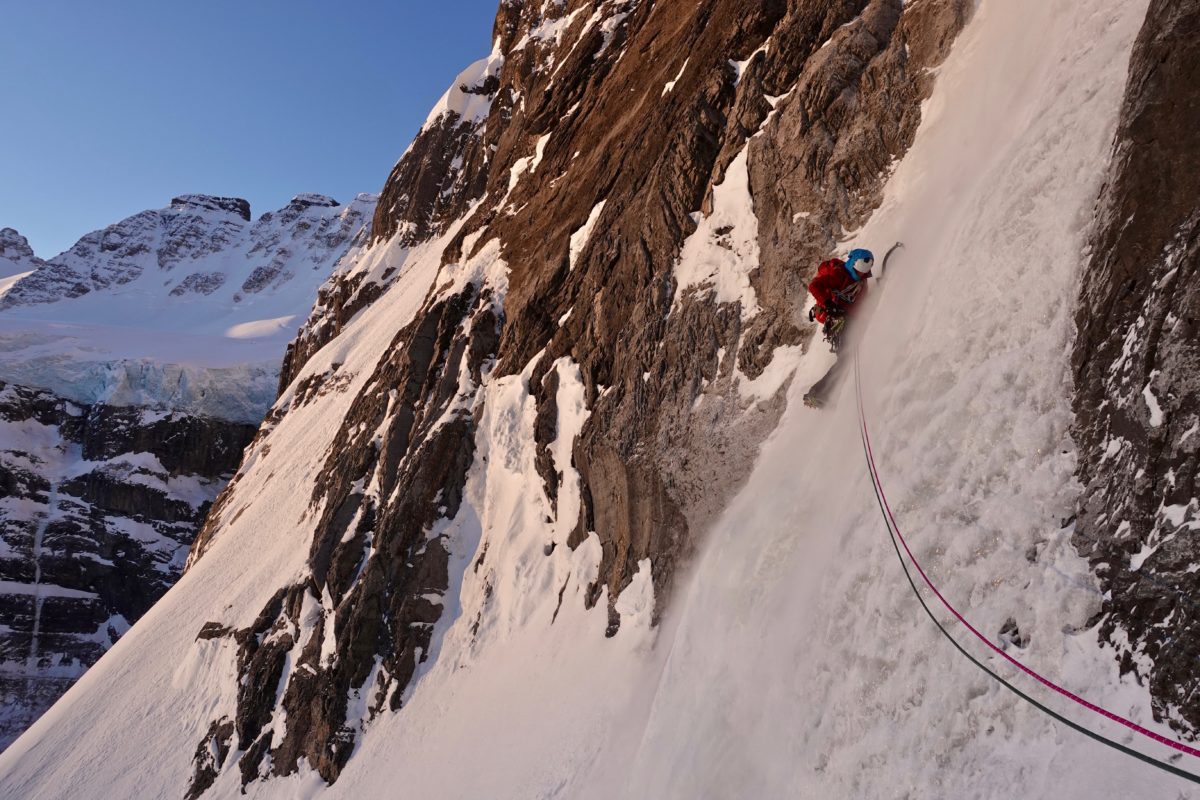 Brette Harrington
There are so many things to say about this climb that make it very special for me.  Firstly, this climb came together so naturally that I am still in disbelief that I ended up on such a grand adventure on Mount Fay’s East Face. The winter wilderness of the Valley of the Ten Peaks is so quiet and desolate, snow covered and silent, I could only think of Marc-Andre and the stories he told me of his climbs here in 2016 with Luka.  Now, hiking in with Luka and Ines, I felt so grateful to be able to experience this place in winter, with two people that I trust completely, and Luka, who also has a deep connection with Marc.
We began the climb during the dark hours of the morning and moved very, very fast.  The terrain lead up vertical ice pillars and steep snow.  It quickly became apparent the high level of expertise my partners had in this terrain. Soon we arrived at the main headwall where we entered into unclimbed terrain. After moving through the bands of limestone and overhangs the rock deteriorated into an exfoliating quartzite.  We dug out a two-foot wide bivy ledge on a steep snow arête. The following day, the climbing was sustained with pitch after pitch of difficulties. I have never in my life moved so quickly through difficult, lose mixed terrain. We topped out in a winter storm with the last hue of light and descended the south face by headlamp. The entire experience was topped off with a circuitous trek across a glaciated plateau, another bivy, then a long snowy down-climb back to Moraine Lake. I am in awe of this place; the beauty of these wild mountains that spark such great adventure and imagination for those of us who are looking for it. 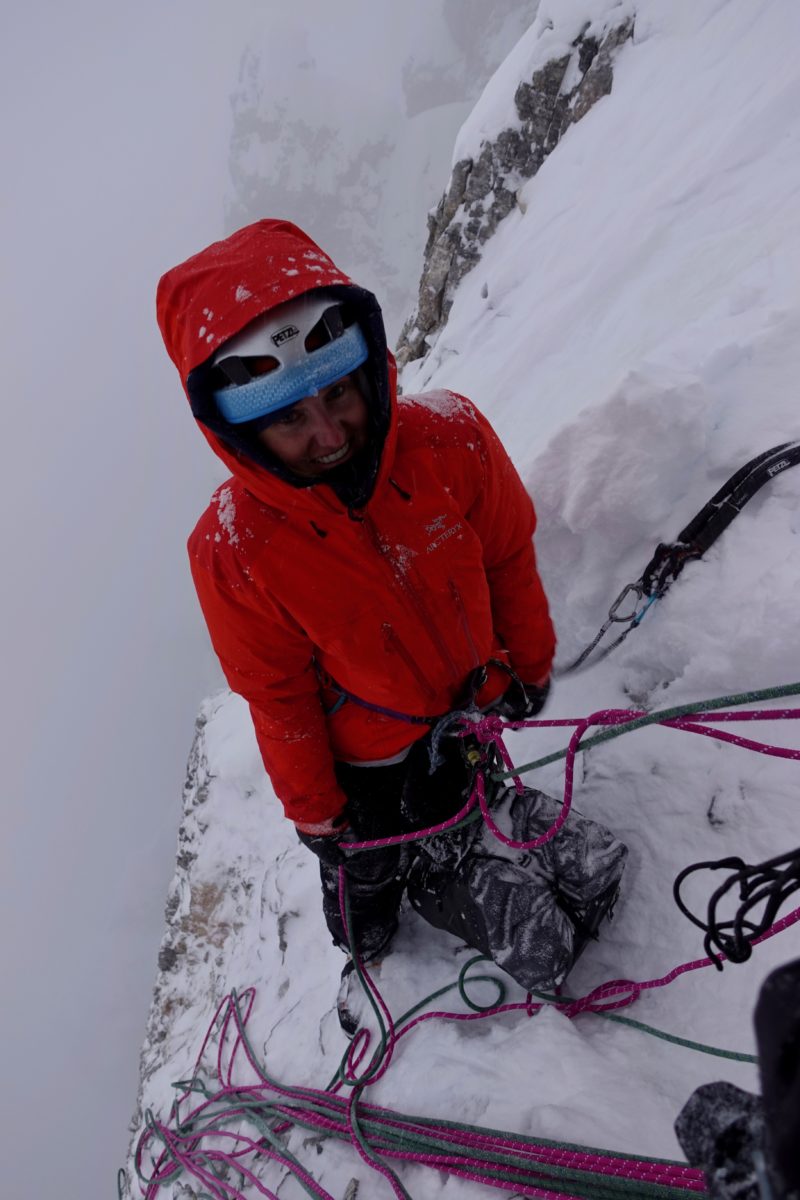 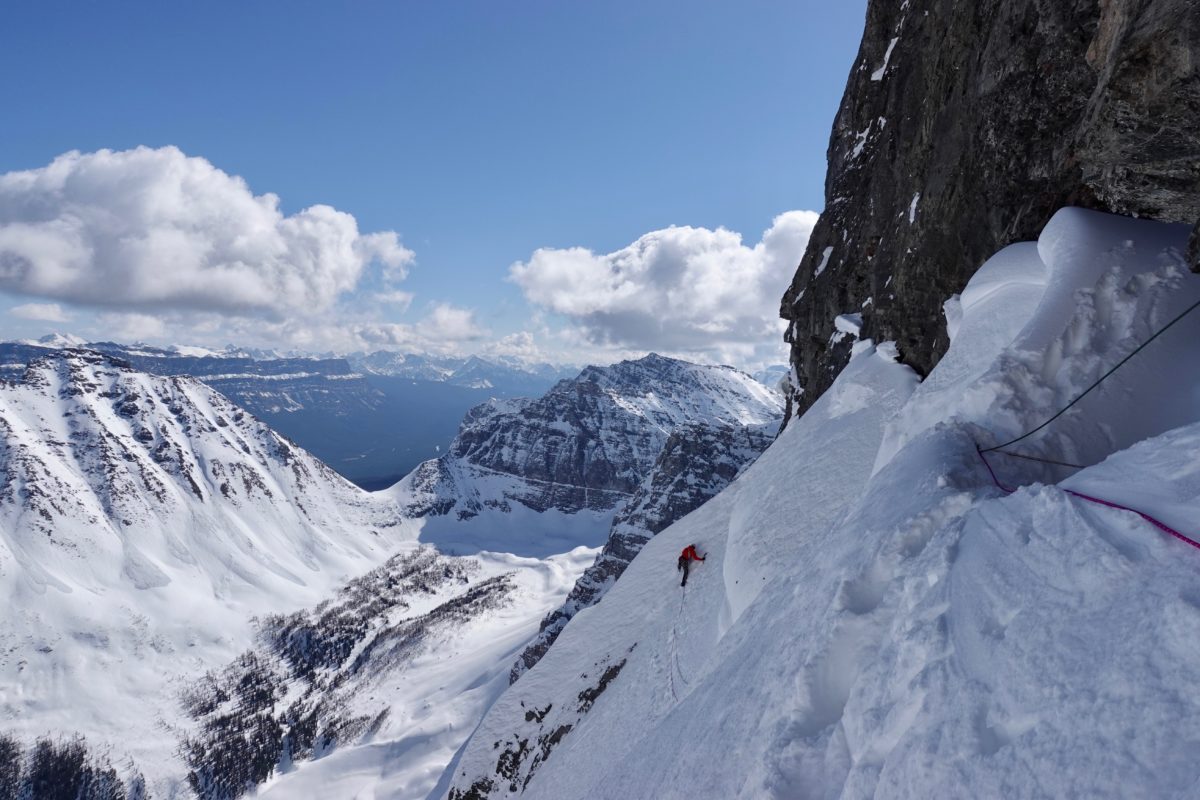 The Details:
Mt. Fay (3234m), East Face
Route: The Sound of Silence
Climbers: Brette Harrington, Ines Papert and Luka Lindic
Date: April 2 – 3, 2019
Grade: M8, WI5
Height: 1100m
Gear: Set of cams up to #3, set of nuts, set of micro nuts, 6 pitons, 9 ice screws
Type of climbing: The first part follows the 1984 route, climbing three steeper ice steps with lower angle snow in between. Where the 1984 team escaped to the right, we continued straight up. The headwall offered very steep and demanding mixed climbing up very loose and hard to protect rock. One bivy is probably mandatory to repeat the route. A cloudy day or a night start is recommended to avoid getting in trouble with huge spindrifts and avalanches. 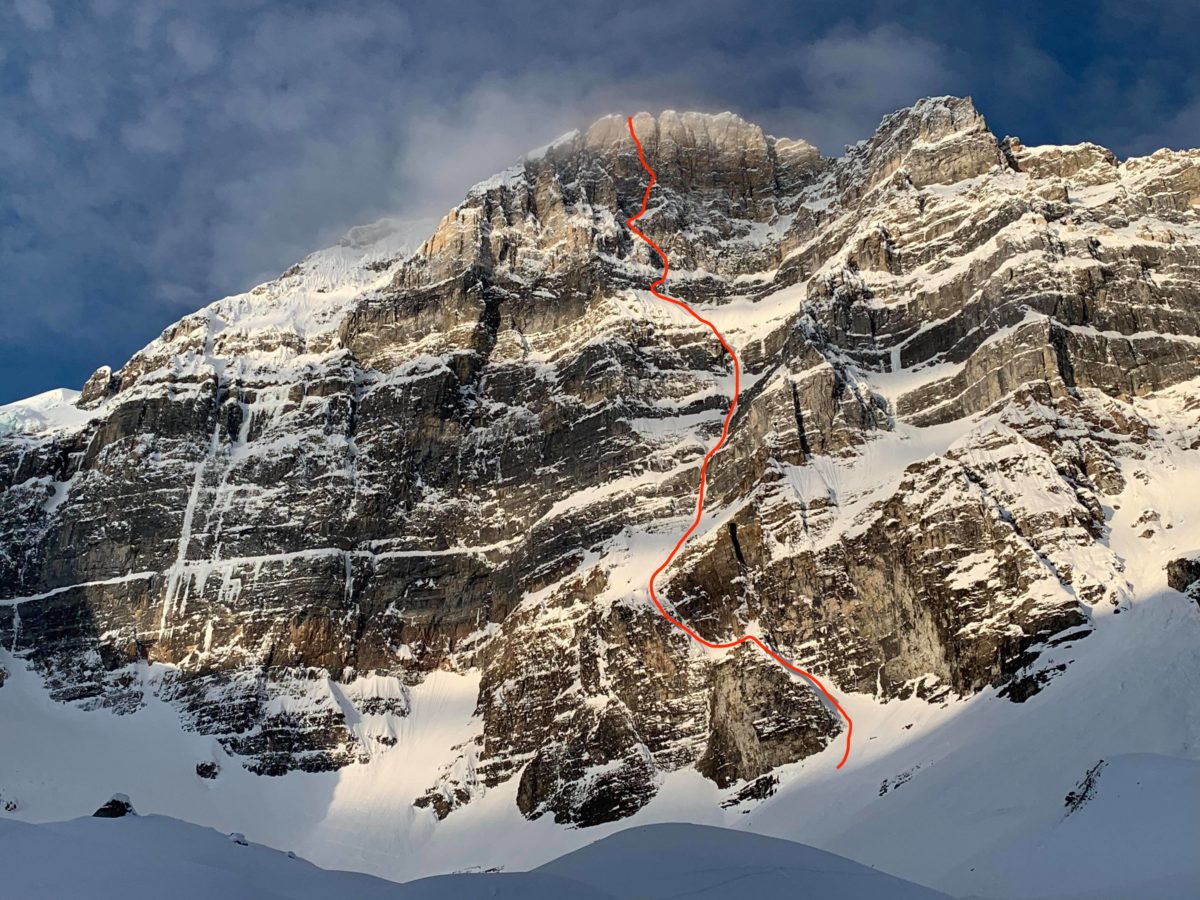