Auyuittuq National Park in southern Baffin Island has drawn climbers to its iconic peaks for decades. Fairly easily accessed through popular Akshayak Pass, mountains like Thor Peak (with the world’s highest 1250m face) and Devil’s-Tower-on-steroids Mount Asgaard, are staggering in scale.  However, Akshayuk and its valley of towers is but a speck in the southern edge of this park – merely a gateway to what lies beyond. Auyuittuq means ‘The Land that Never Melts’ in Inuktitut; a full third of the 19,000 square kilometre park is encased by the 6500-foot high Penny Ice Cap.  In late April of 2018, I joined Dave Garrow of Banff and John McClelland of Whistler to do a rarely completed 230 km, self-supported ski tour through the Baffin Mountains between the towns of Qikiqtarjuaq and Pangnirtung. The route would take us sea to sea across Baffin Island over the Coronation Glacier, Penny Ice Cap and Turner Glacier, with our final few days spent savouring the splendor of Akshayuk.

We flew to ‘Qik’ on Dave’s Aeroplan points so the routing to get there was about as convoluted as possible. The three of us finally rendezvoused in this Inuit town of 600 people after a four-day milk run through outpost airports to get here from the West Coast. 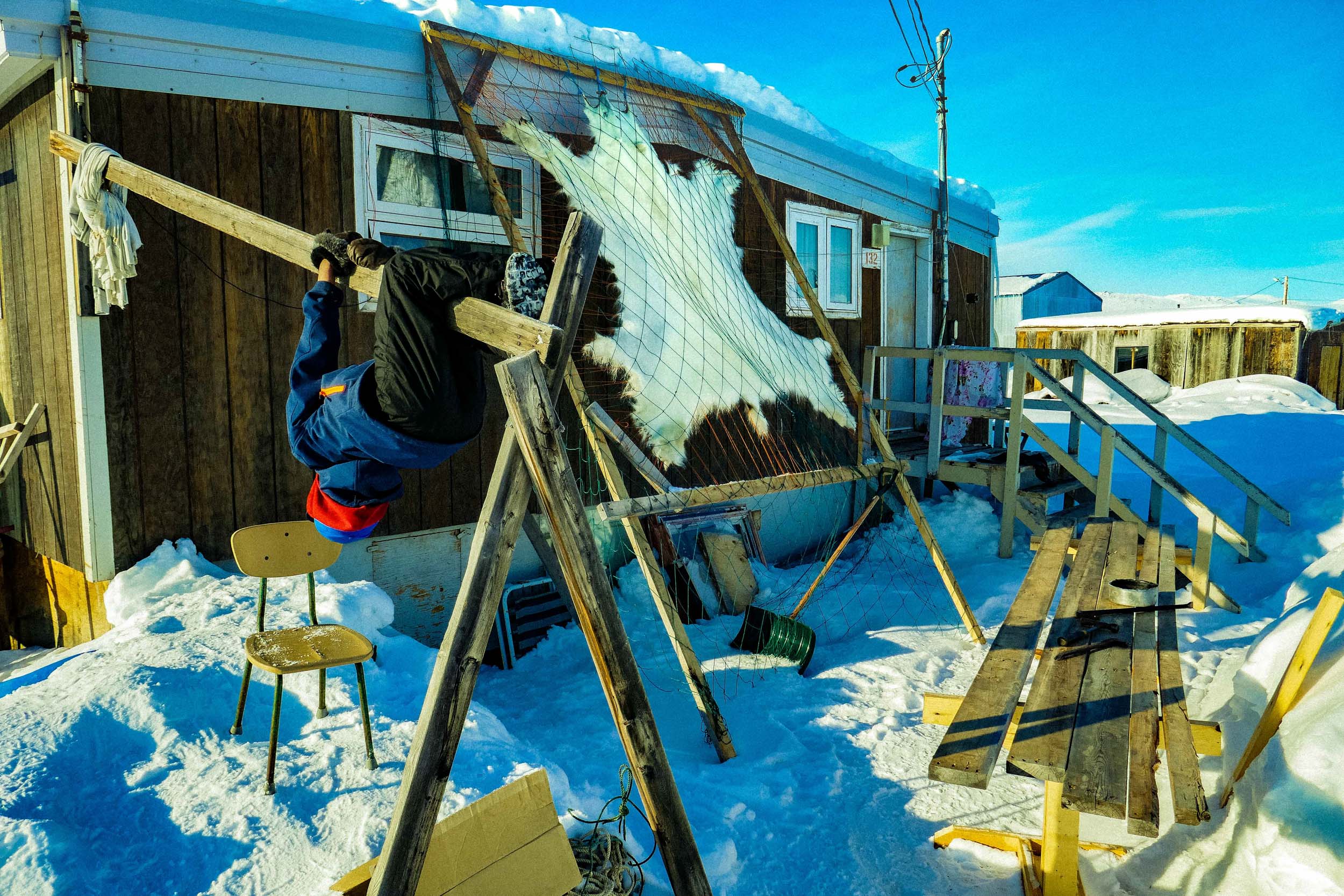 A boy in Qik swings on a beam beside the drying hide of a polar bear. Still part of the local diet and economy, every Inuit community is allowed to harvest a set quota of bears each season. Dave arms the corners of our perimeter fence with blank 12-gauge rounds to ward off any curious bears that may wander into our camp at night. Sandwiched between ‘Ice Berg Alley’ (a seal hang-out that is a popular feeding area for bears) and several fjords where the bears den, the area is home to a very healthy population of the critters. 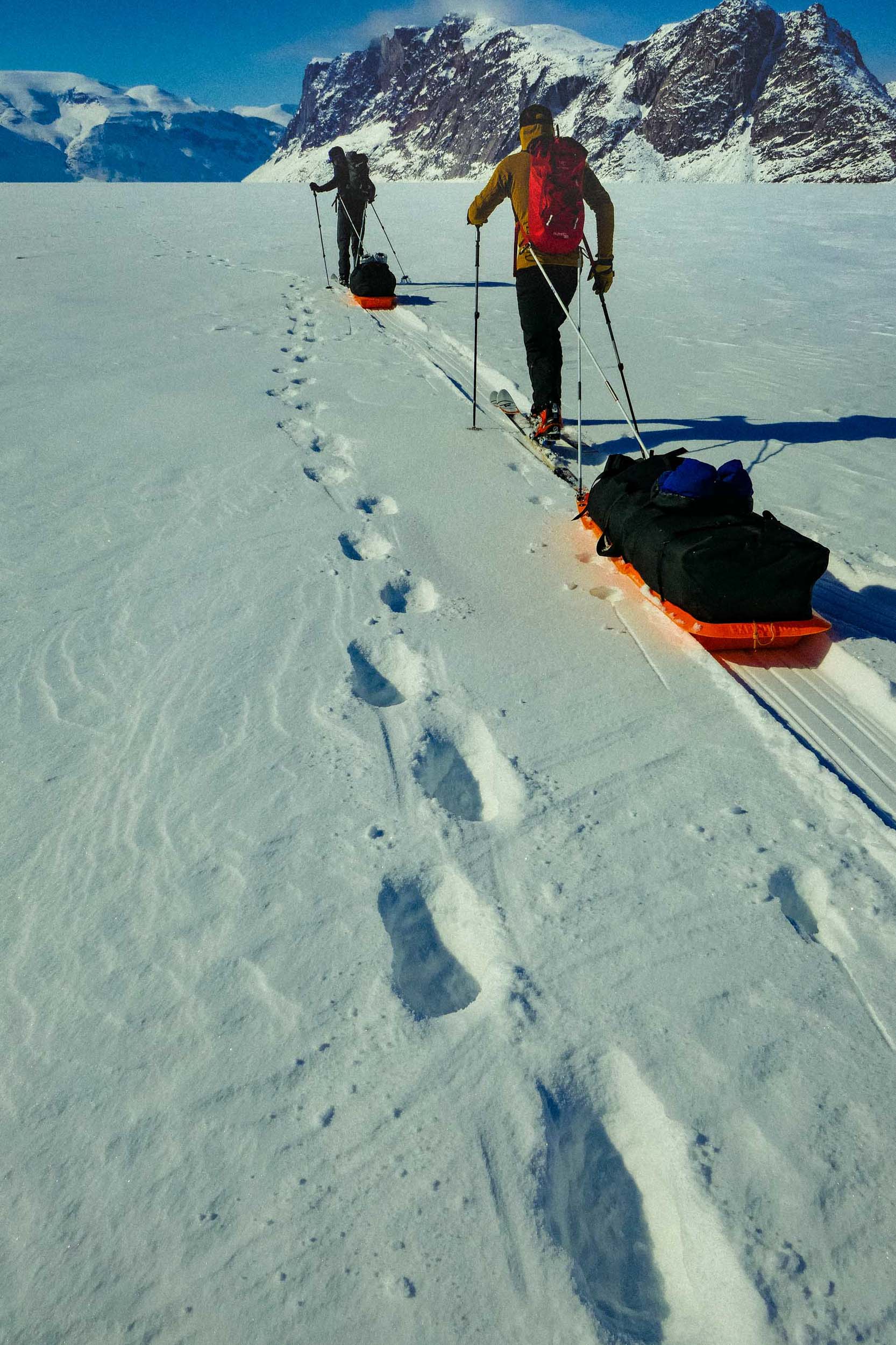 John and Dave ski alongside the fresh tracks of a polar bear on Coronation Fjord. Like a ship in the night this ‘nanuk’ walked only 100 metres past our camp as we slept. The big fella took a nice line toward Coronation Glacier so we followed its lead.  It’s most common to see females with their cubs at this time of year as they emerge from their dens to feed on the area’s plentiful ringed seals, but this was likely a lone male as no cub tracks were to be seen. 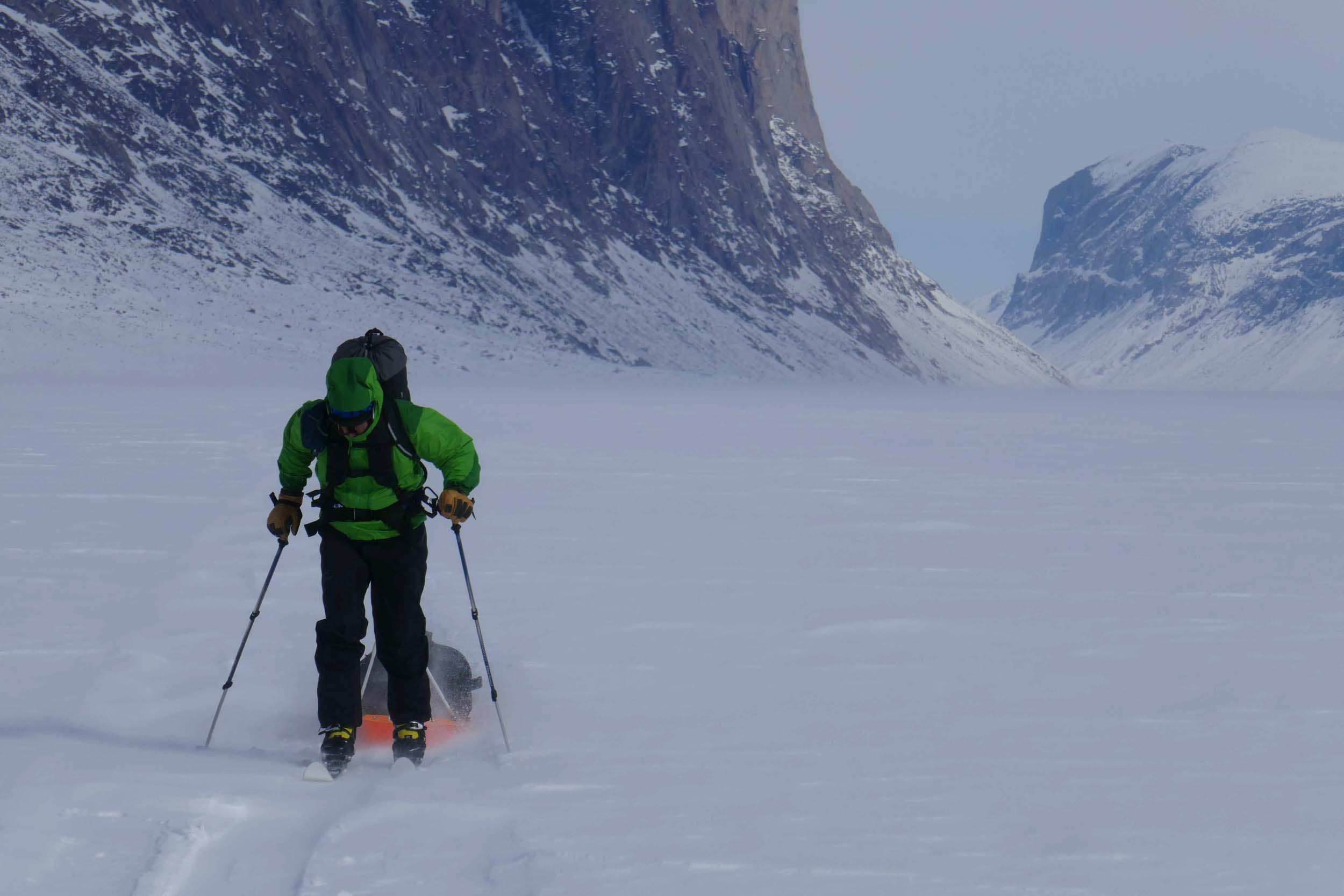 Dave leans into a bitter headwind on Coronation Fjord. Temperatures dipped somewhere into the -20 to -30 Celsius range most every day- welcome to springtime on Baffin. 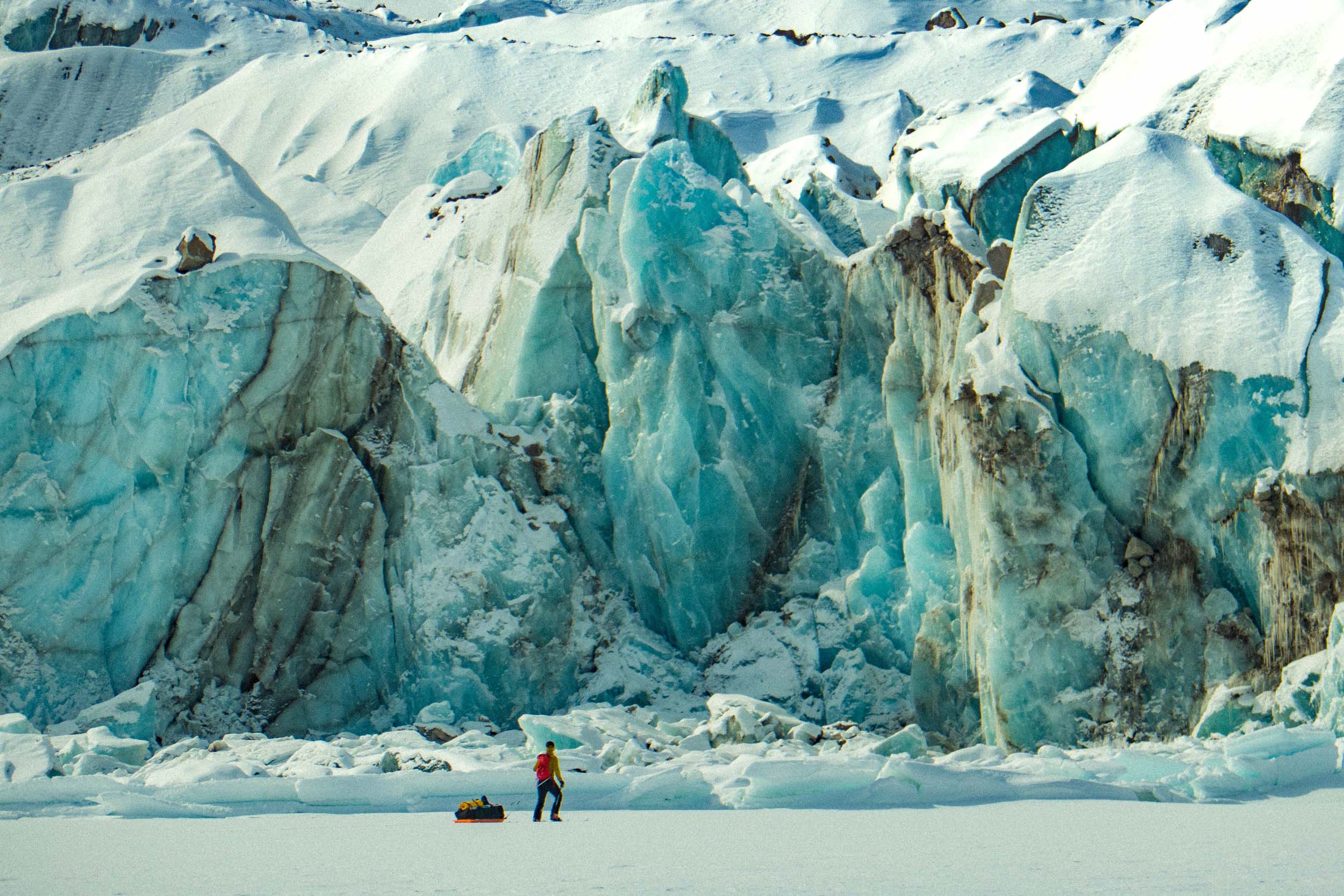 Dwarfed by the toe of Coronation Glacier, John McClelland searches for a route up and around this frozen behemoth to get on top. The Coronation was our gateway to the vast sprawl of the Penny Ice Cap. 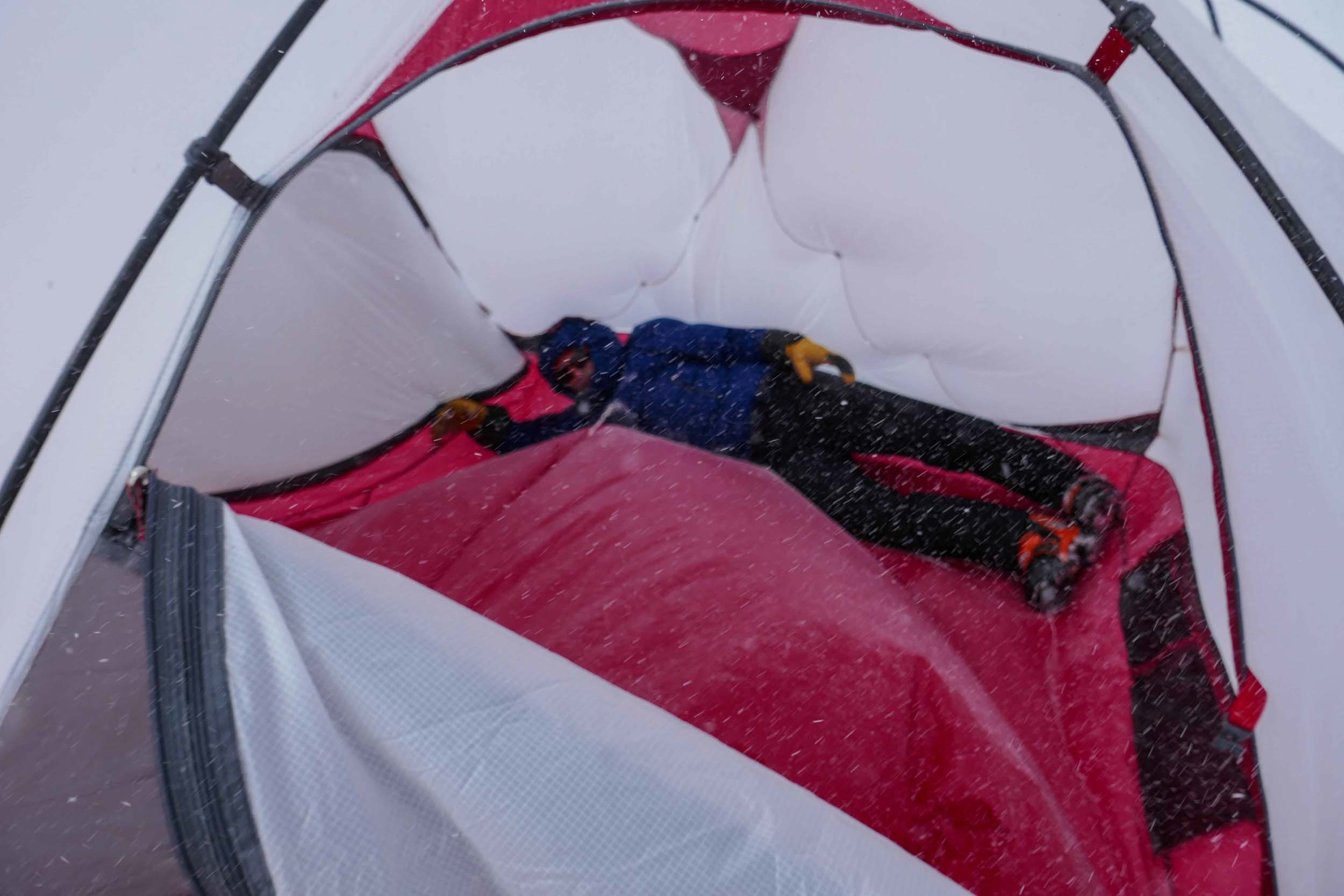 John uses his body to hold down the tent from the inside so it doesn’t blow away into oblivion as we take it down during a windstorm one morning on the Coronation Glacier. A few hours earlier, we awoke at 3 am to the tent being flattened into our faces by a sudden gale.  Dave won the rock-paper-scissors match and acted as ballast inside while John and I stepped into the -30 C blow to lock down the tent with a few more guylines. The headwind continued through the night and the next day, making for chilly touring conditions. 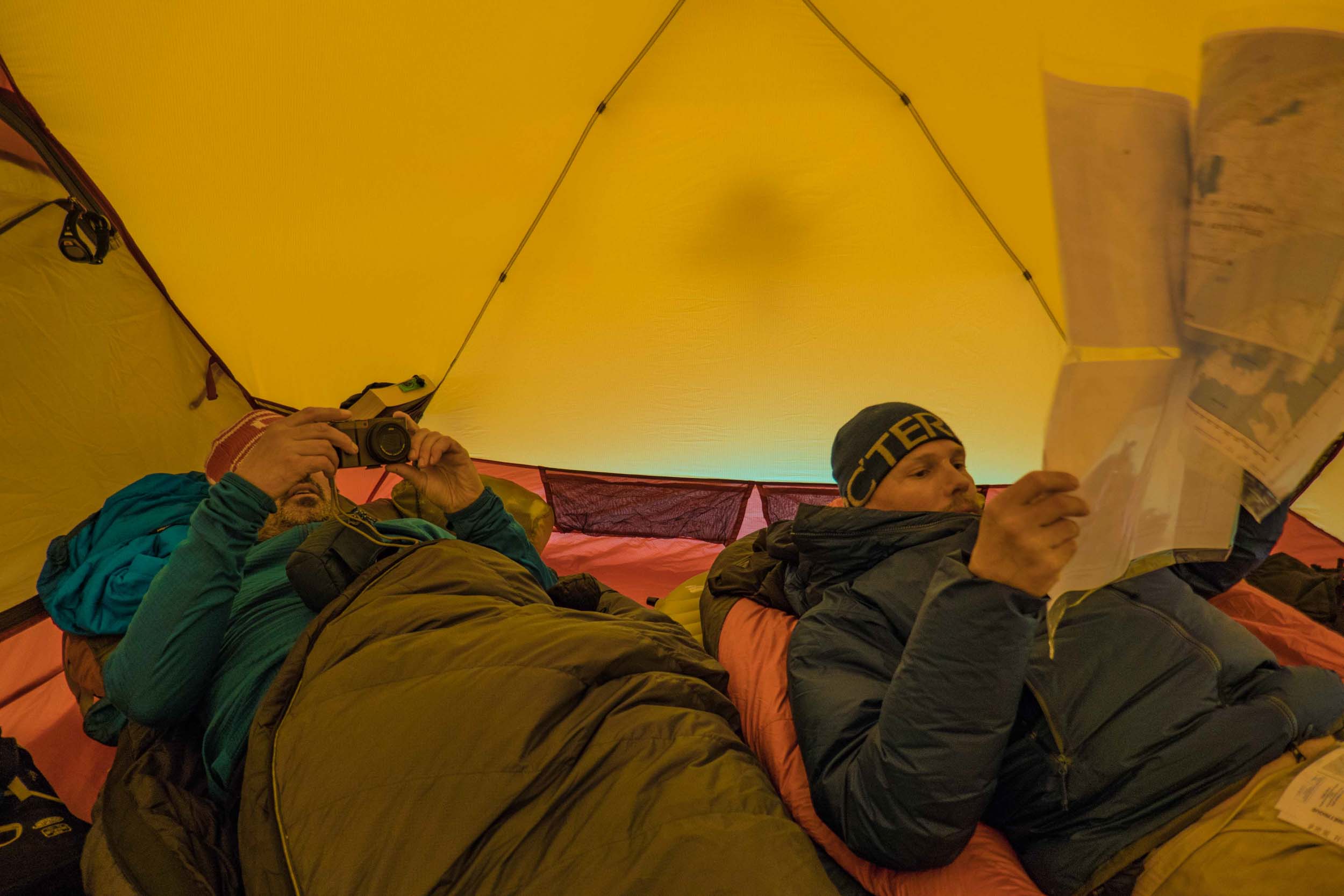 Checking our route maps and photos from the day, Dave (left) and John take in some relaxing tent time at the end of a day of dragging sleds. 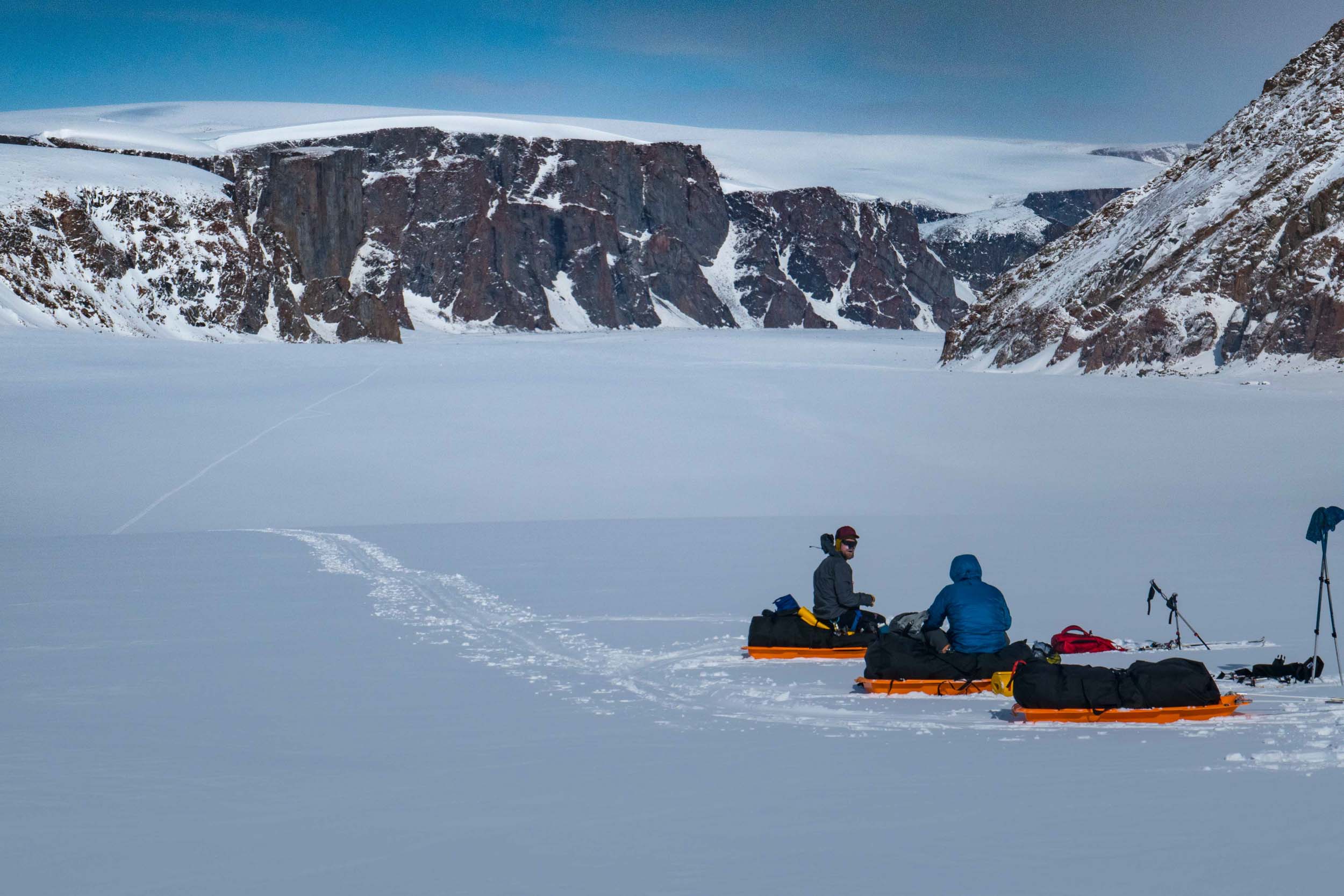 You can see the long trail we’ve broken up the gut of the glacier.  We’d take a rest every hour to refuel, recharge and savour the splendor around us.  On this particular break, it was windless and quite pleasant. Dave brought about 6 pounds of dehydrated jerky. Realizing he made way too much for himself, he tried to unload heaps of it on John and me from the start.  I happily took about two pounds off his hands to bump up my lean rations. 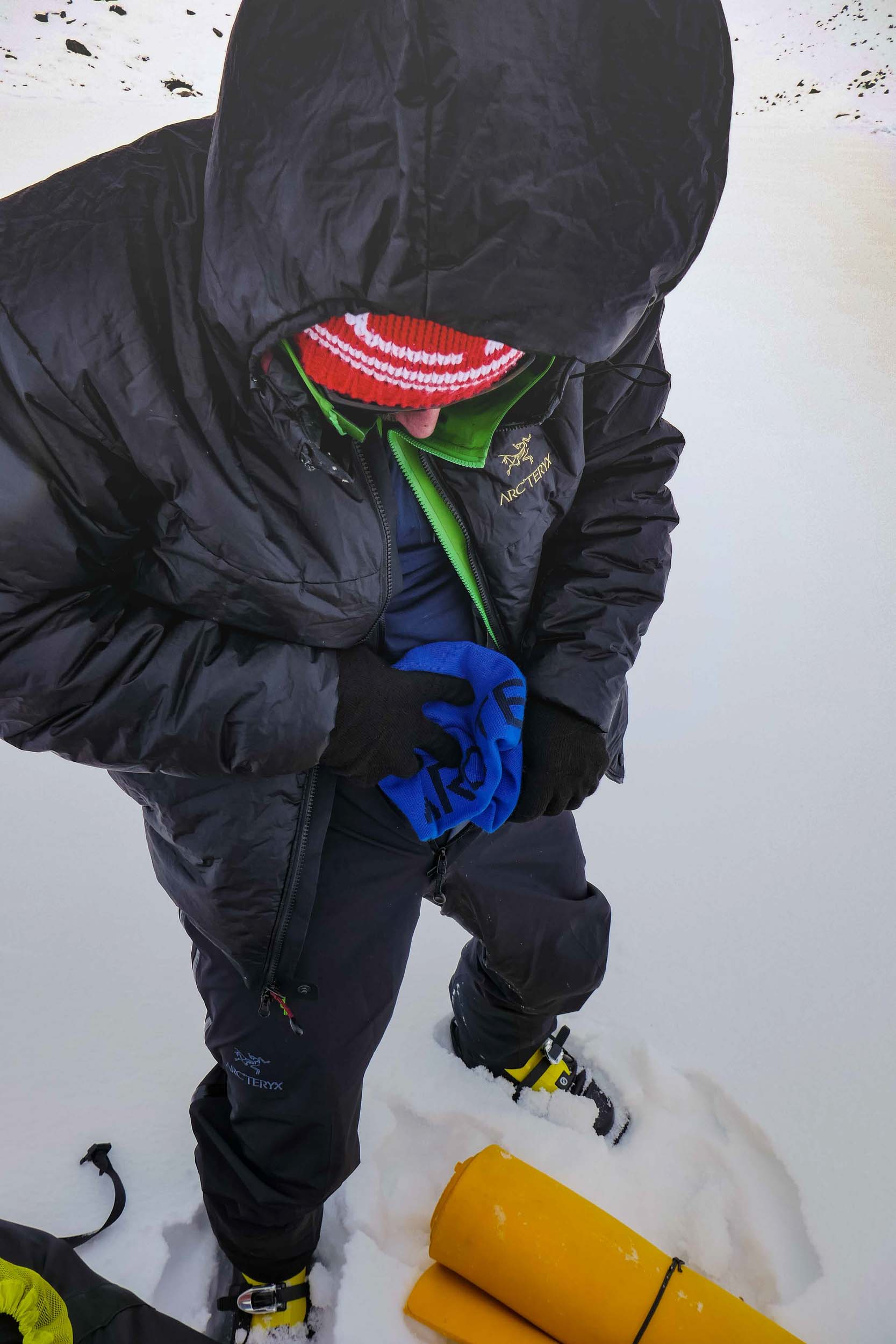 Dave forgot his wind briefs so an Arcteryx toque comes in handy for a bit of extra insulation where it counts during another day of biting arctic headwinds. 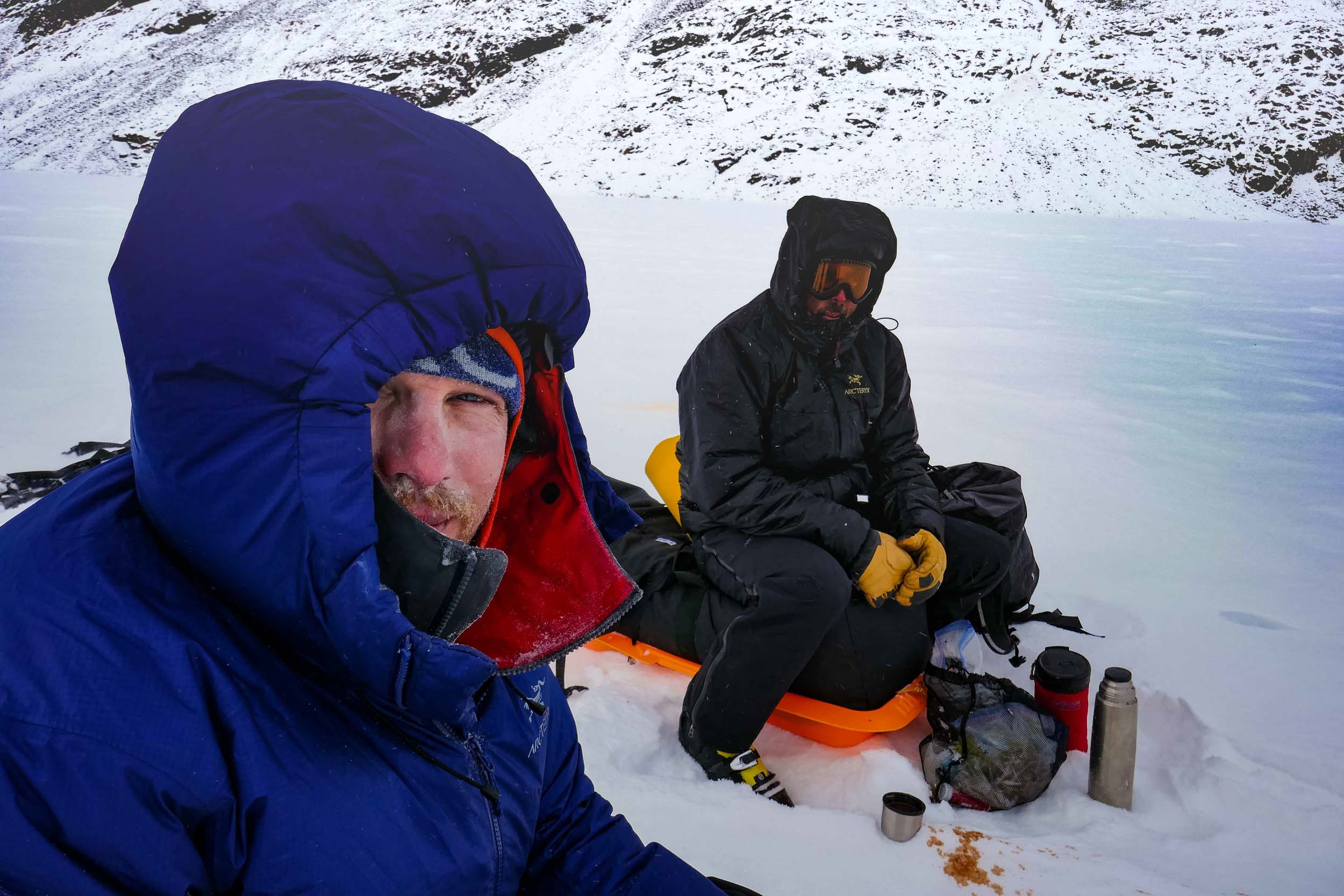 It’s all about the wind. If there was no wind, we’d hang out during our breaks in our base layer. When the breeze came up we locked into our down. John and Dave’s subdued looks in this photo reflect the less than comfy conditions. 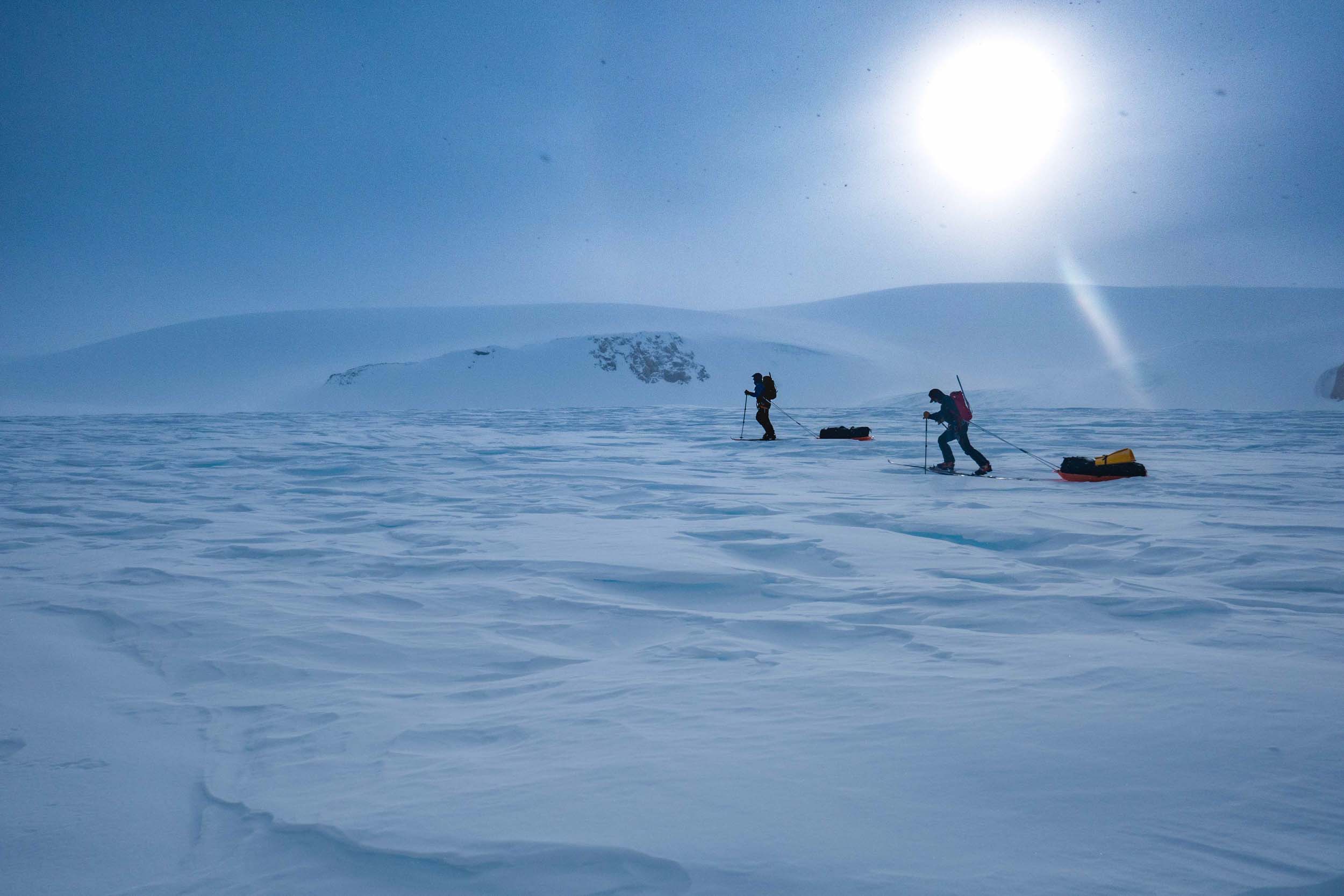 Heads down under a dipping sun, John and Dave finish off the last hour of travel for the day before we settle into camp. 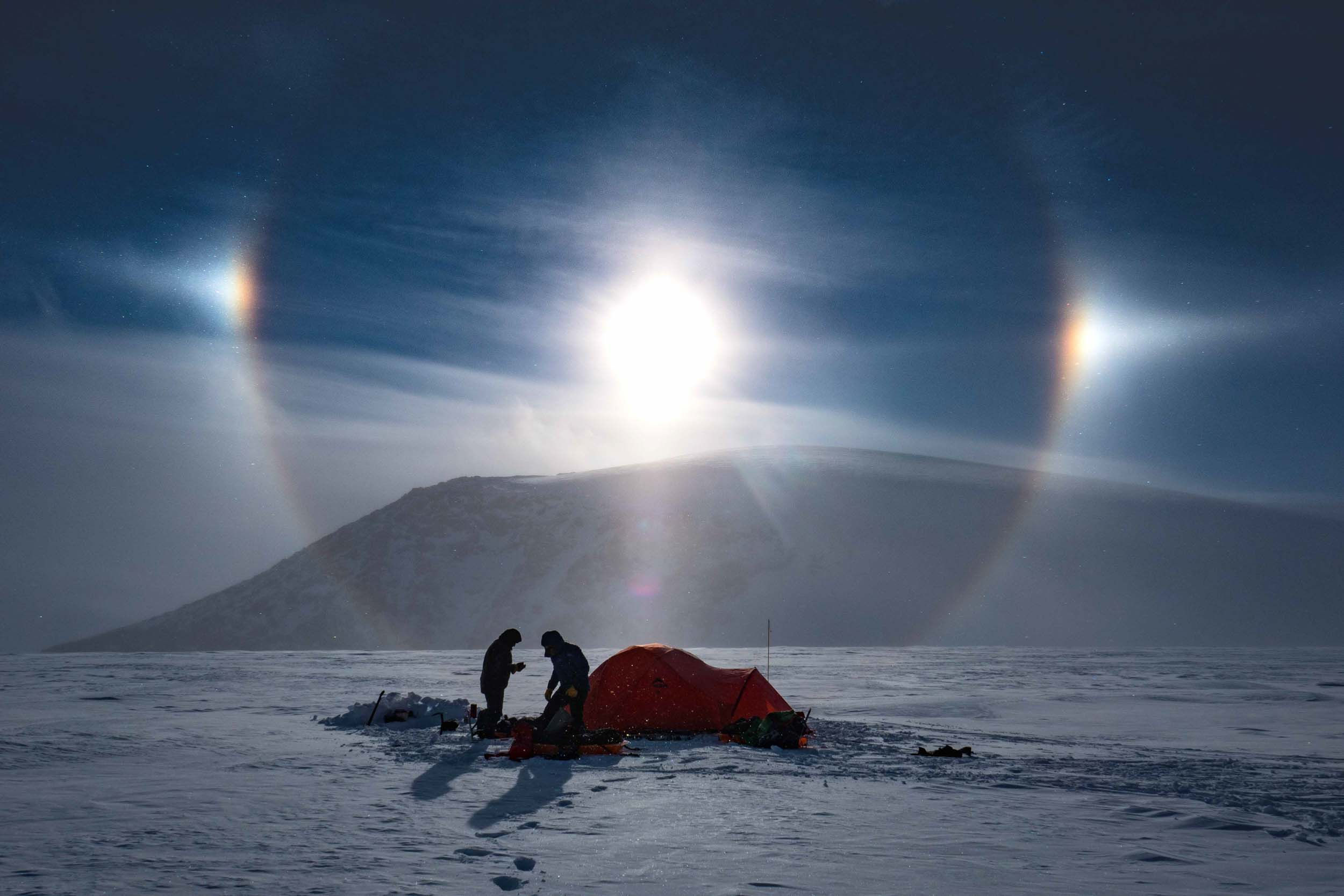 Airborne ice crystals form an evening sundog over our camp on the Penny Ice Cap. The ice cap was named after Captain William Penny, a whaling captain from Scotland who pioneered over-wintering with native Inuit in the area during the 19th century. 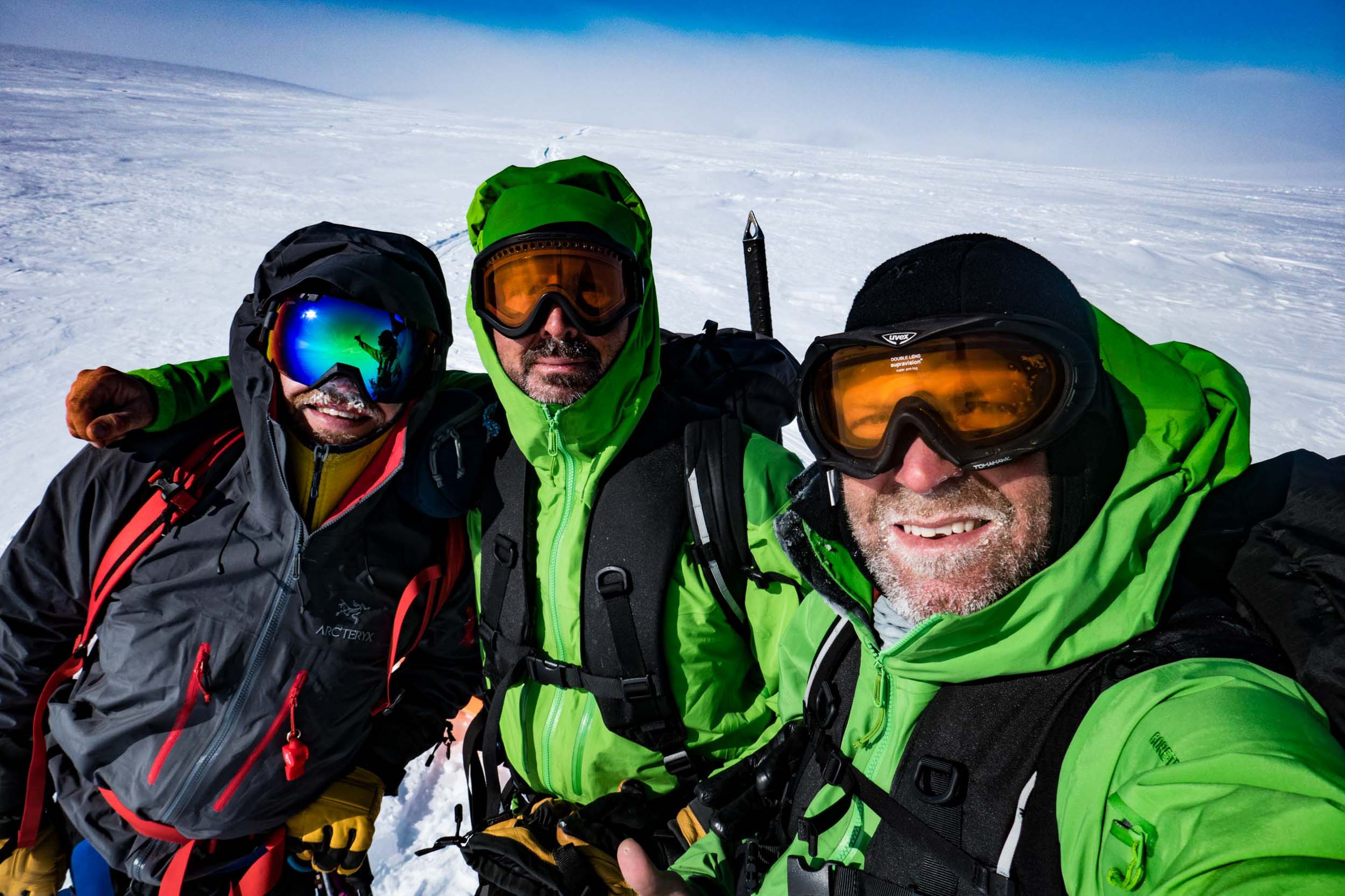 Our team (from left) John McClelland, Dave Garrow, and Frank Wolf at the apex of the Penny Ice Cap. All downhill from here! 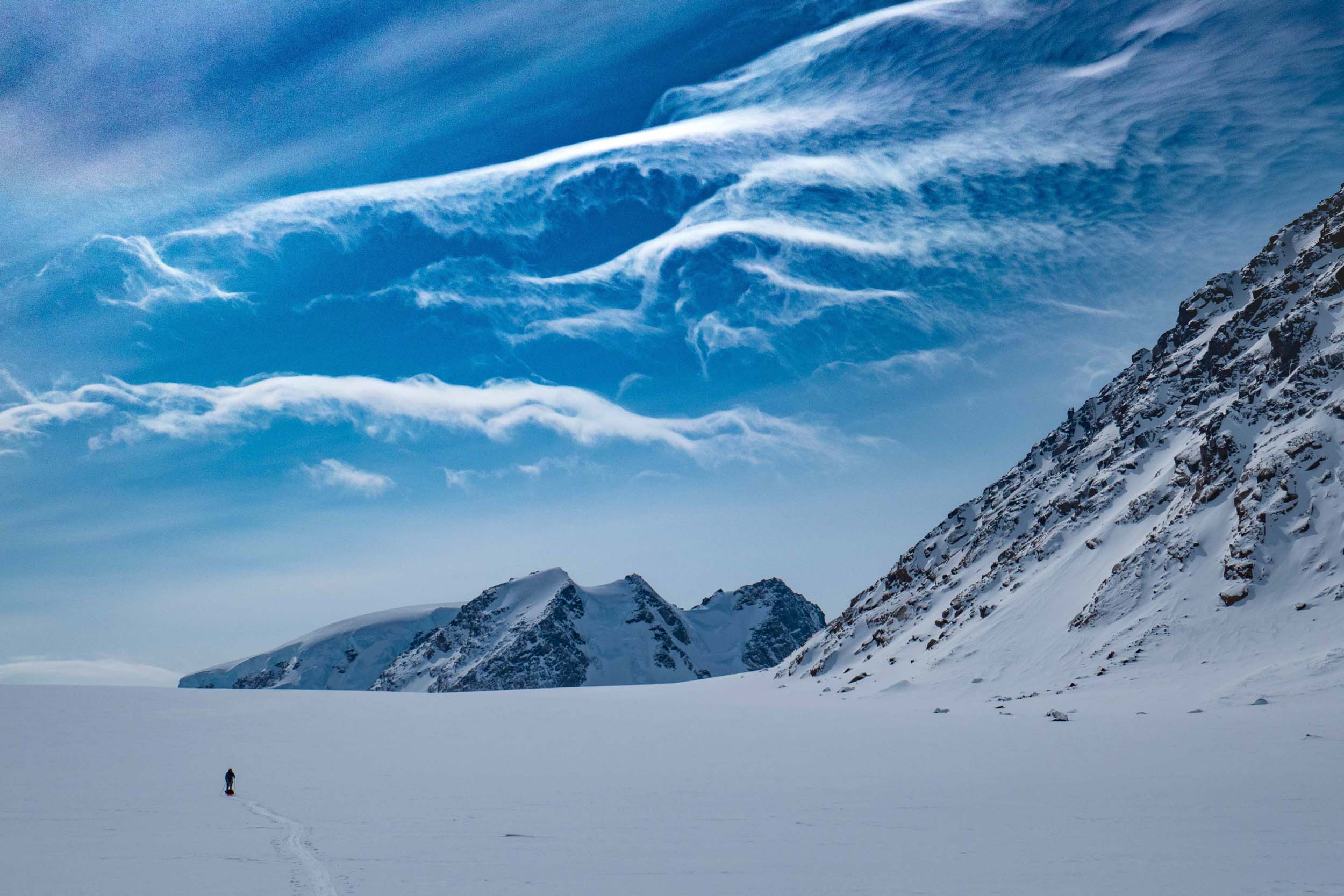 Wispy clouds form the illusion of a distant mountain range over the Penny Ice Cap. 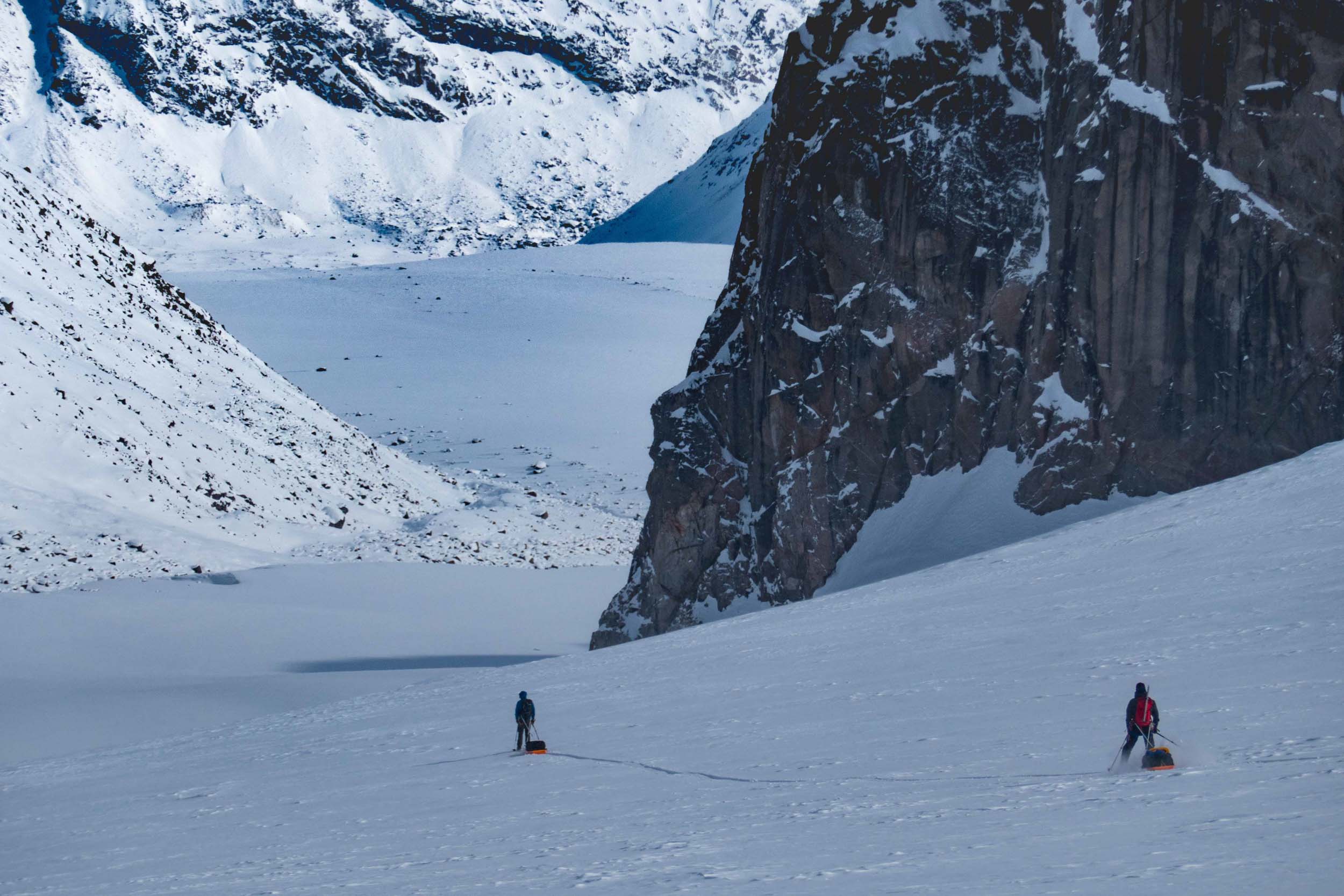 Skiing down from the Penny through a slot in the Baffin Mountains that leads to Turner Glacier and Akshayuk Pass. 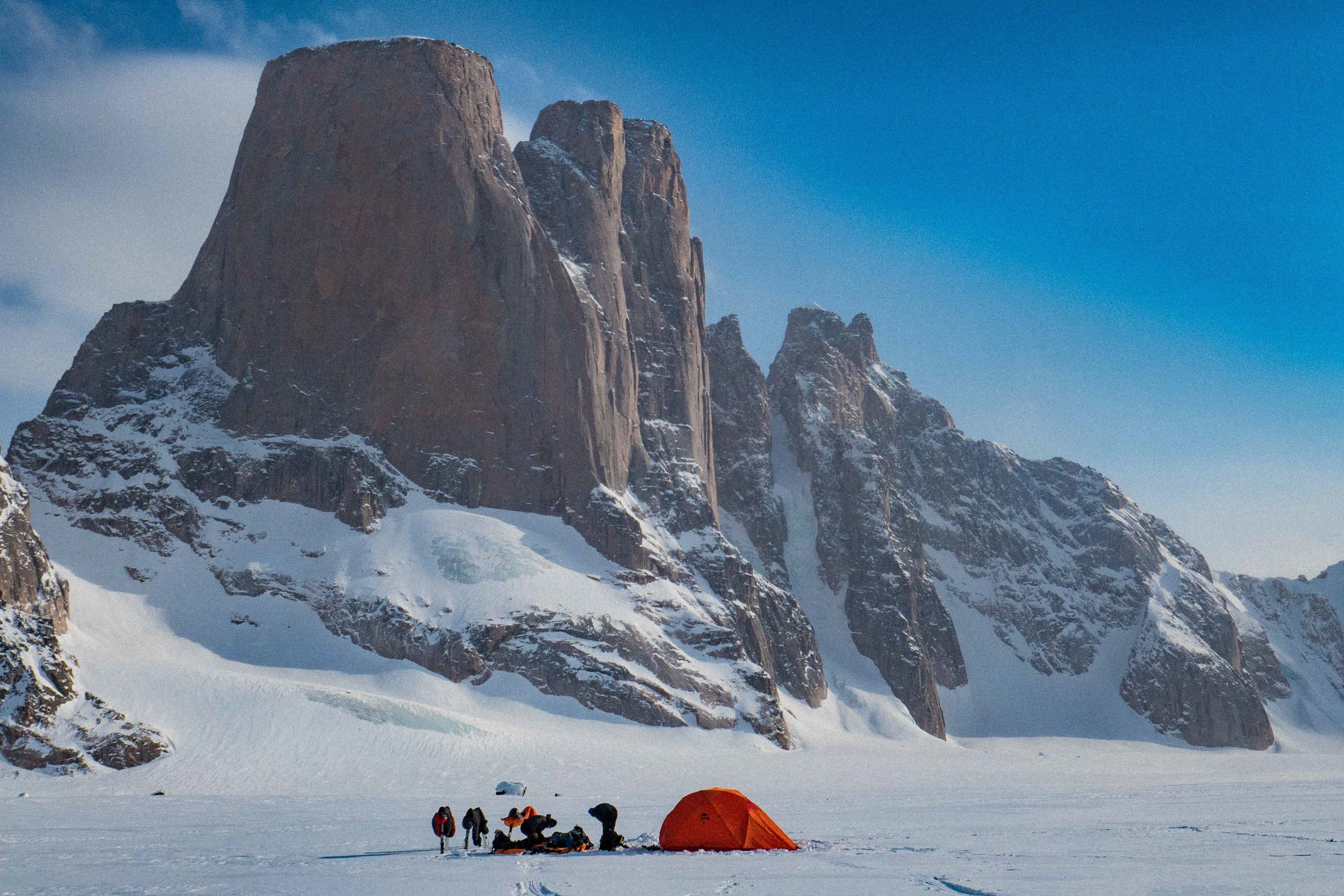 We pitched our camp on a perfect afternoon on the backside of staggering Mount Asgaard. Named after the home of the Norse gods, it is truly a heavenly hunk of rock. 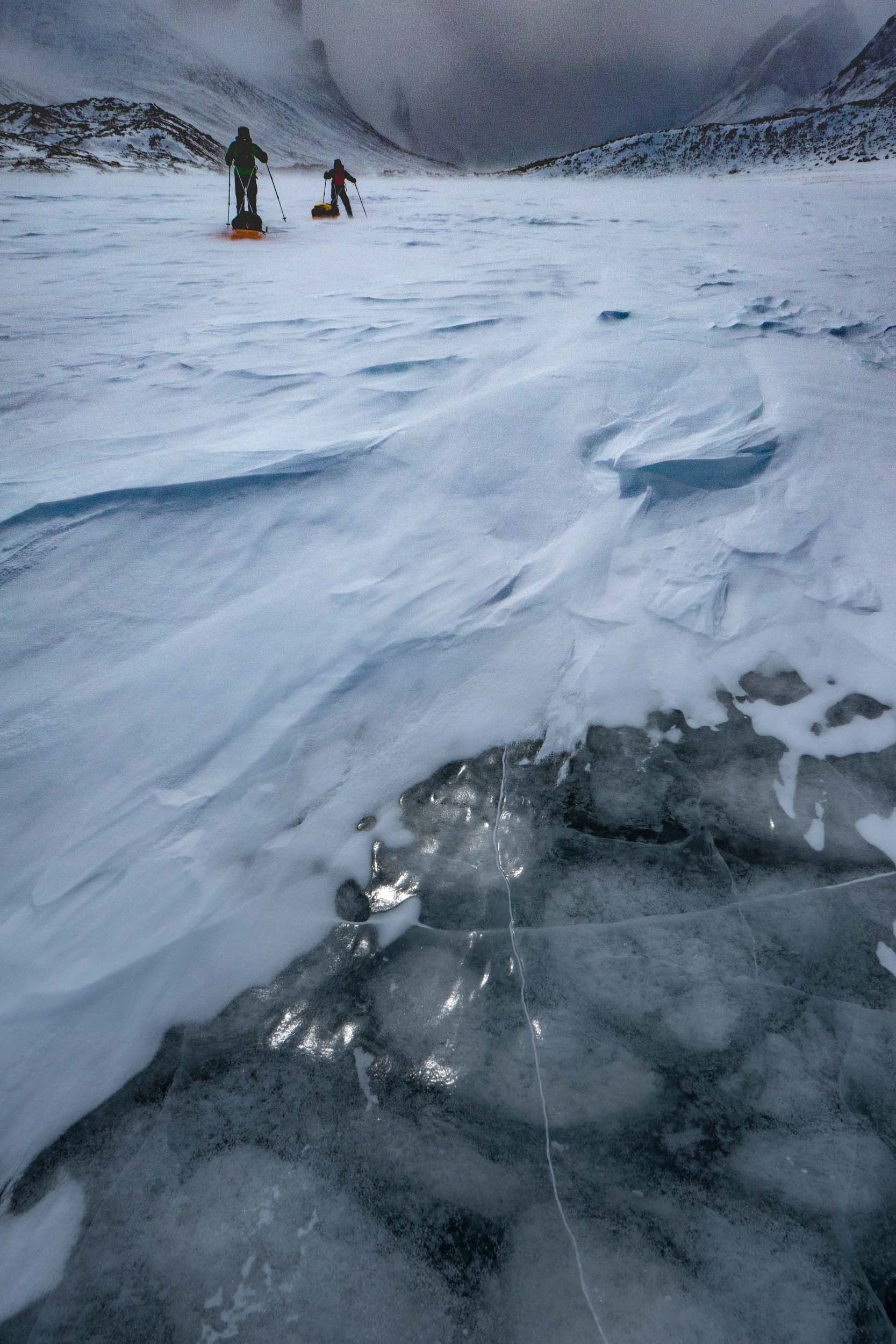 We entered Akshayuk Pass at Summit Lake and began our turn for Pangnirtung with a howling tailwind that pushed us effortlessly along. 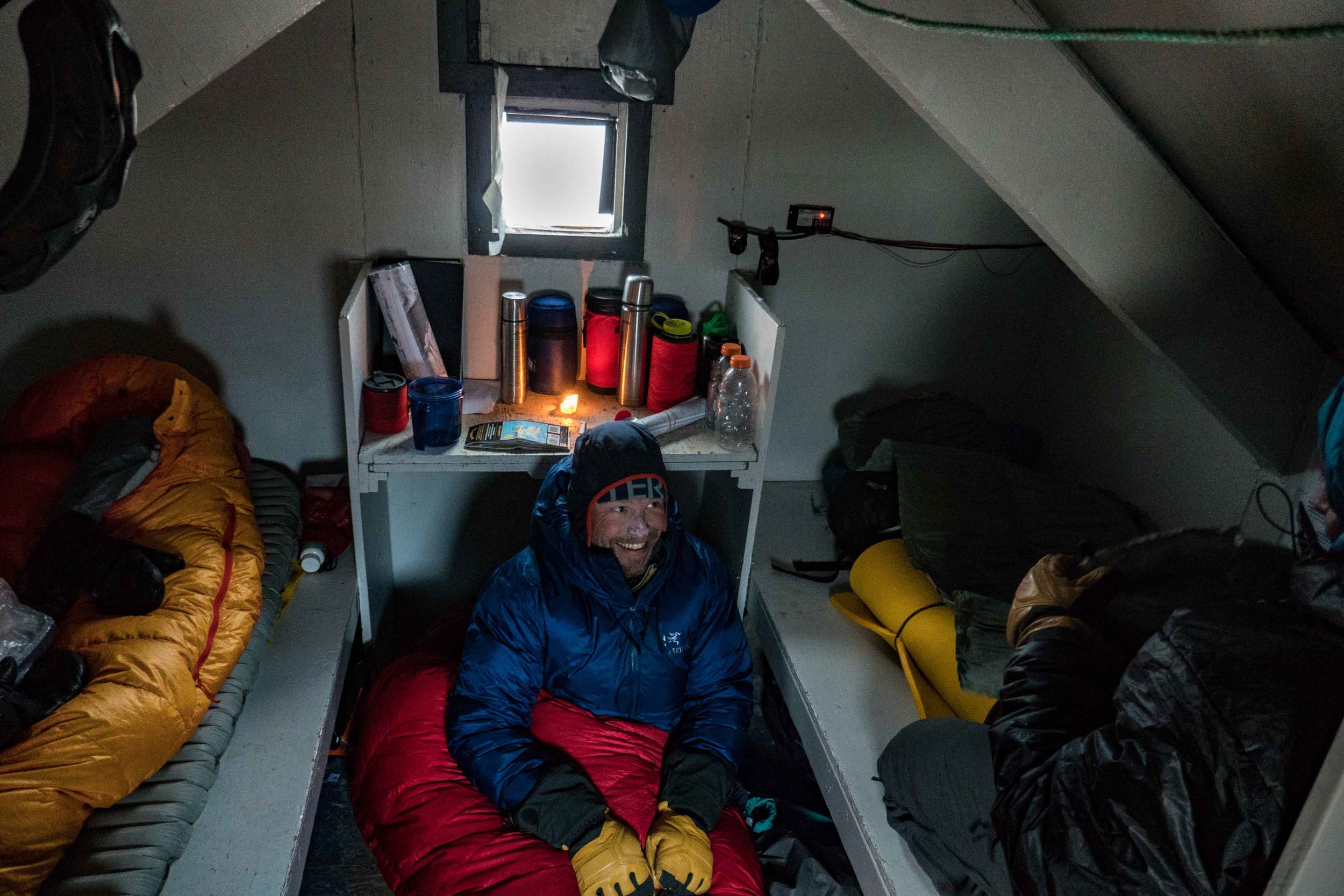 There are a series of small shelter cabins scattered along Akshayuk Pass. Installed by Parks Canada for summer hikers to escape inclement weather, we utilized the snug unit at Windy Lake. As you can see behind John’s smiling face, this luxurious chalet even came equipped with a candle. 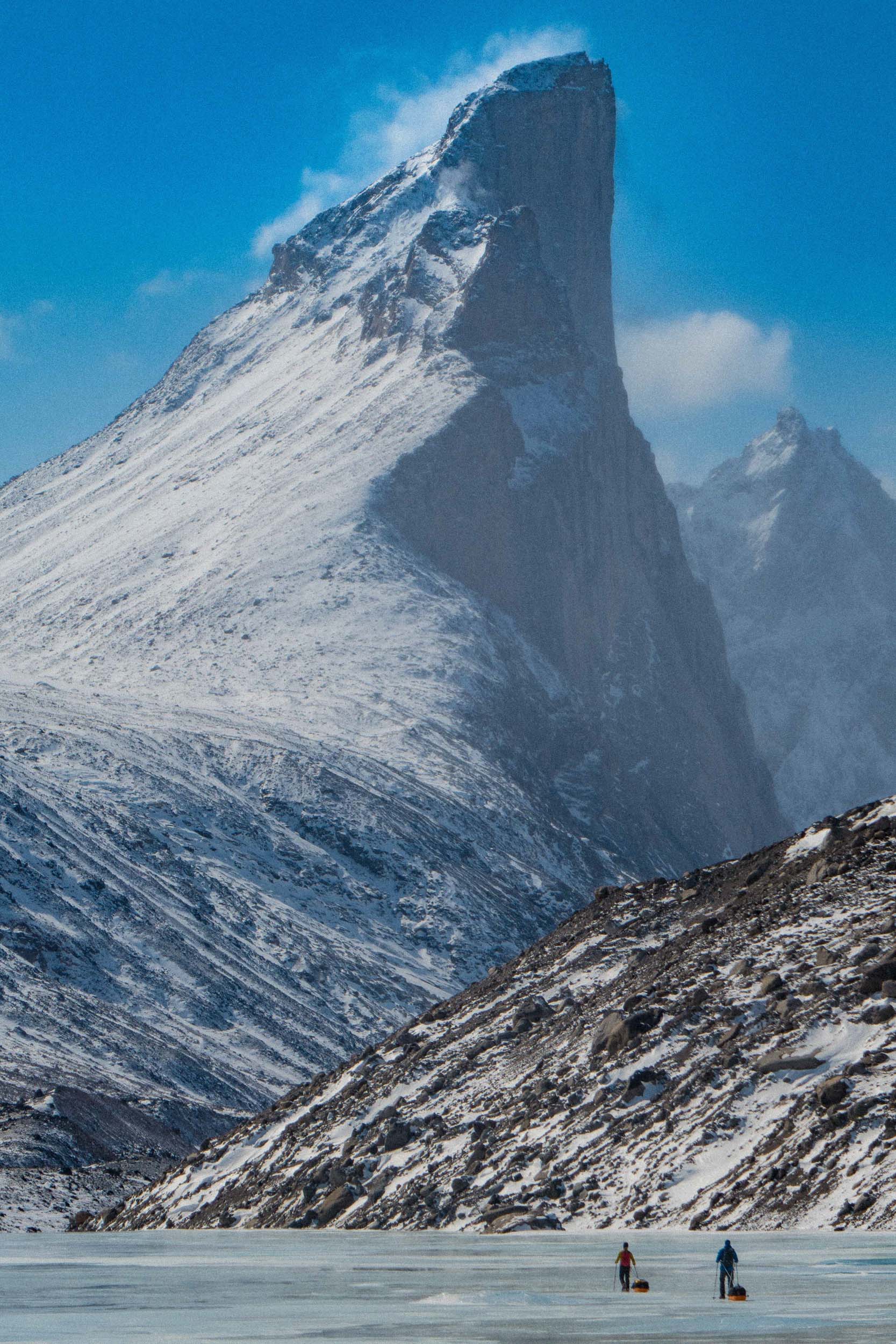 As if lifted from the pages of a Tolkien novel, the 1,250-foot face of Thor Peak looms over us like a colossal vulture. 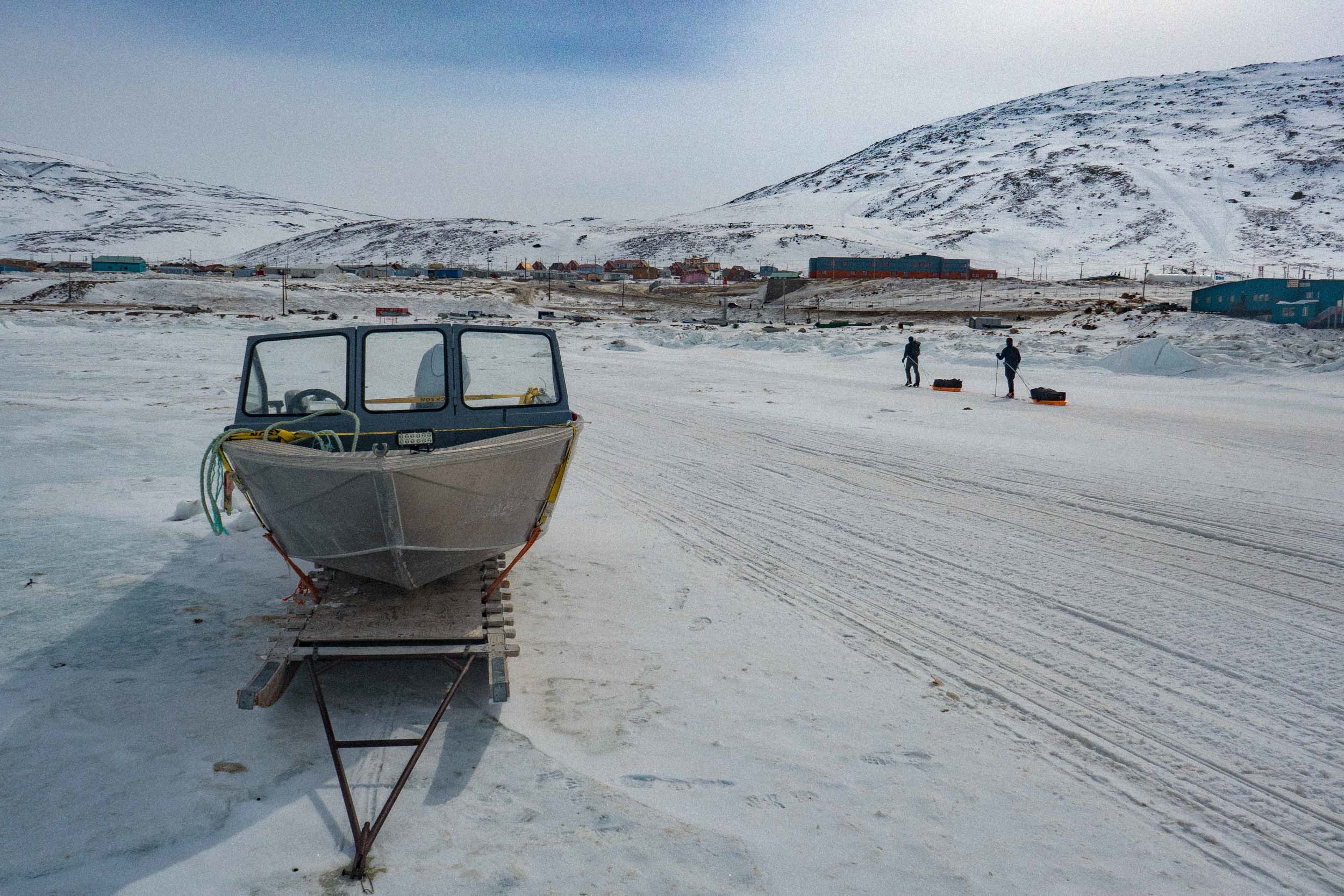 With boating season about a month or so away, we finish up our tour in the town of Pangnirtung. 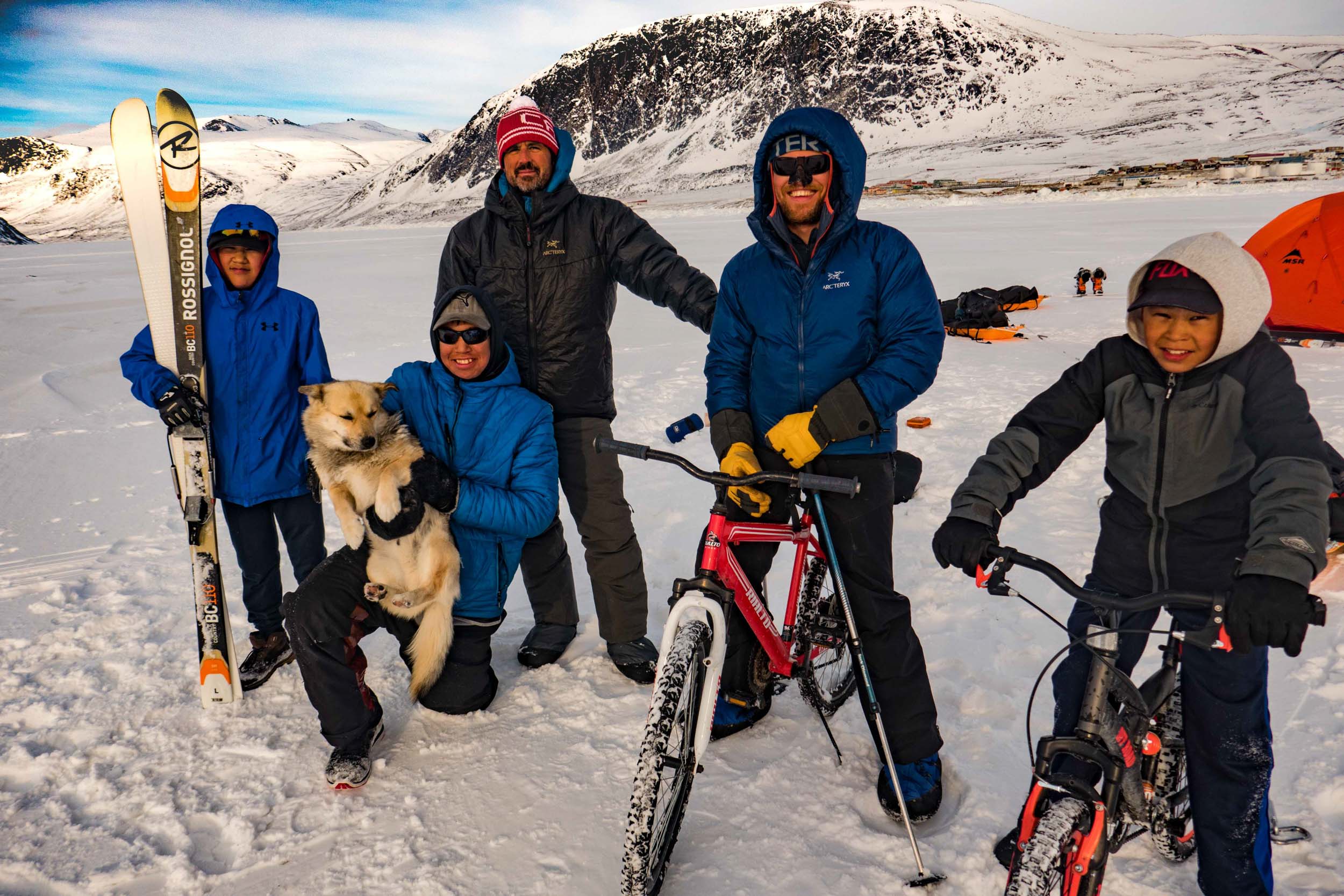 These local teens biked out to our campsite on the ice out front of Pangnirtung to say hi. They’d never skied before so we let them try our boards while we tried out their bikes. Shy at first, they warmed up quickly after the ski session. Here we are posing with our new buddies apres sea ice shred. 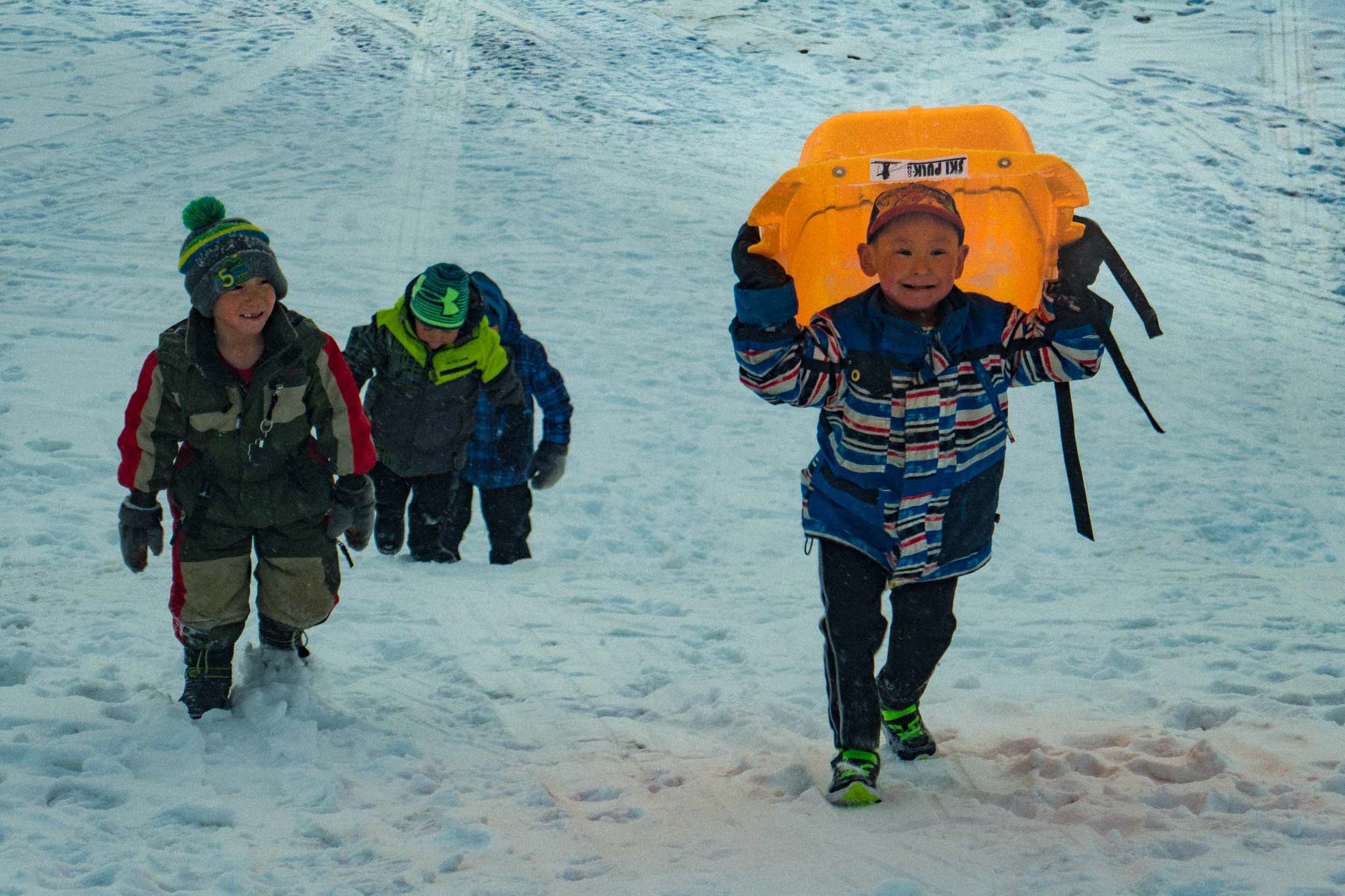 In order to save a bit of dough on baggage overages on our flights out, we stripped the hardware from our ski pulks and gave our three sleds away to folks in the community of Pangnirtung.  These kids were elated to receive the fastest sled in town and ripped the slopes of town all day long on their new toy. All four of these kids fit into one sled!