The Caicos Challenge was a gruelling five-day expedition. It was a test of endurance, both physically and mentally as I traversed eight of the Turks and Caicos’ main islands, completing the journey through human-powered propulsion only. Through a combination of swimming, cycling, running, hiking, and kayaking, I overcame an athletic feat never yet attempted, all while showcasing my body’s capabilities in the face of harsh conditions.

My first time in over a year doing distance in a Kayak, I endured exhaustion and muscle spasms as I took to the water, paddling against the force of a startling blue ocean. Some anxiety was to be expected, so onward I pressed, pushing both body and mind to the limit as I began carving out a good stretch of distance.

As things smoothed over, I was able to find my rhythm from Salt Cay to Grand Turk. It wasn’t long after when I was greeted with a pod of dolphins. The friendly creatures would continue to breach the surface of the water for the next 5 KM of the journey, proving to be reliable travel companions as I continued on along the Turks and Caicos Passage. 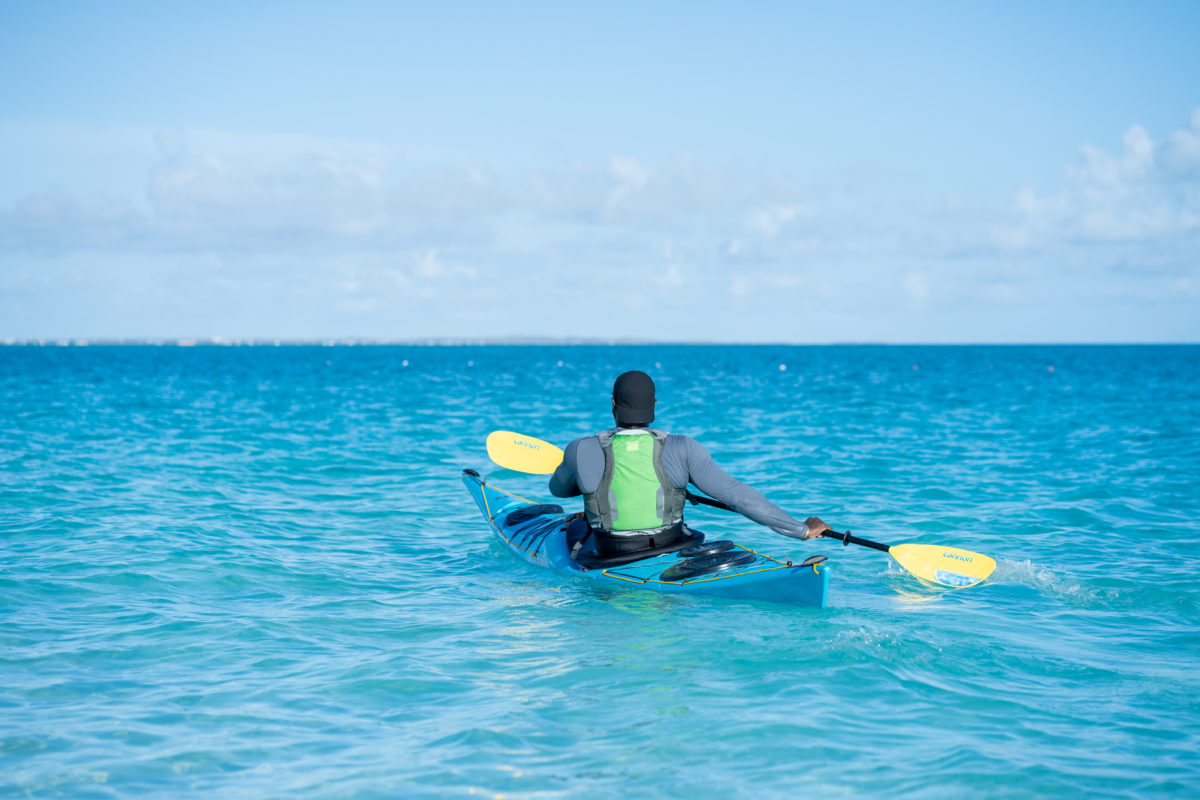 Through all of this, I relied on the teaching of my travel companion, Chev Dixon. He was able to tamper down many of the anxieties I had regarding taking to the ocean after such a long break from kayaking since my expedition in 2020, kayaking the length of Lake Ontario. Dixon, a professional kayaker born in Jamaica and raised in New York agreed to join me on three separate kayaking portions of the expedition. Dixon reassured my technique and overall confidence as I paddled against the ocean water. This companionship proved to be invaluable, especially so for the initial leg of the expedition.

The next day brought with it a stronger start as I settled into a rhythm. Knowing my limits, I wanted to conserve energy for the long trek ahead, so slow and steady was the name of the game as I paddled my way across the ocean.

Soon after, my journey across the Atlantic was met with rough waters. The waves grew to an intimidating size, battering my kayak as I made my way through. The ocean was quick to overtake the kayak, and it wasn’t long before I capsized, overcome by the strength of the waters. But I would not let this dampen my spirits. Not to be bested this early on, I quickly re-mounted my kayak and, with the help of Dixon, continued forward, maneuvering against the harsh waves and rough waters. I was able to put up a good fight against the waves before the toll of the journey overtook me. Fighting back against serious muscle spasms and fatigue, I finished out the second day. A fight well fought.

Day three proved to be the most taxing, testing my limits both physically and mentally as I began the expedition from South Caicos. Following a late start, I was met with harsh winds. As soon as I made it to exposed waters on my stand-up paddle board I sat down and began to paddle. It was a battle against the winds, struggling to maintain balance in the water all while continuing to move forward. Luckily, I was able to traverse the water without capsizing.

Soon after, I began my hike on East Caicos. The first 10km proved to be enjoyable as I was accompanied by Kevin Bethel, my logistics coordinator, and LeMen Welch who was the videographer of the expedition. We made good work of the terrain and were able to keep our spirits high for the initial part of the hike. Though kayaking and hiking are tests of one’s physical stamina and endurance, the mental toll these activities take is not to be understated. Having the right mindset can be half the battle, especially when the journey takes a toll on the body.

This notion was definitely true as I came to a startling realization about the island. It seemed I had underestimated the total distance by a measure of 12 km, meaning the remaining distance was much more than previously anticipated.

This realization was a major body blow, the looming trail proving to be just as much a psychological hurdle as it was a physical one. It was here I decided to take on the trail alone, hiking, running and swimming solo along the remaining distance.

It wasn’t long after when nightfall overtook me, the darkness made more perilous as I traversed through rocky cliffs and drop offs, all without the aid of a flashlight. The remaining distance loomed over my head, the isolation of the journey posing immense psychological challenges, despite my physical strengths. As I entered the water, I waded through a pitch-black ocean, swimming alone in the darkness through the channels. Without the light of the moon to aid me, I had to rely on my own capabilities, trusting my navigational and endurance skills to get me through this next bit.

3km from the shore, conditions improved. Bracing against the dark waves, it was here I spotted a light in the distance; my team blinking their lights from the shore. The relief was overwhelming. I was the first person to have traversed the entire East Caicos Island in a single day. 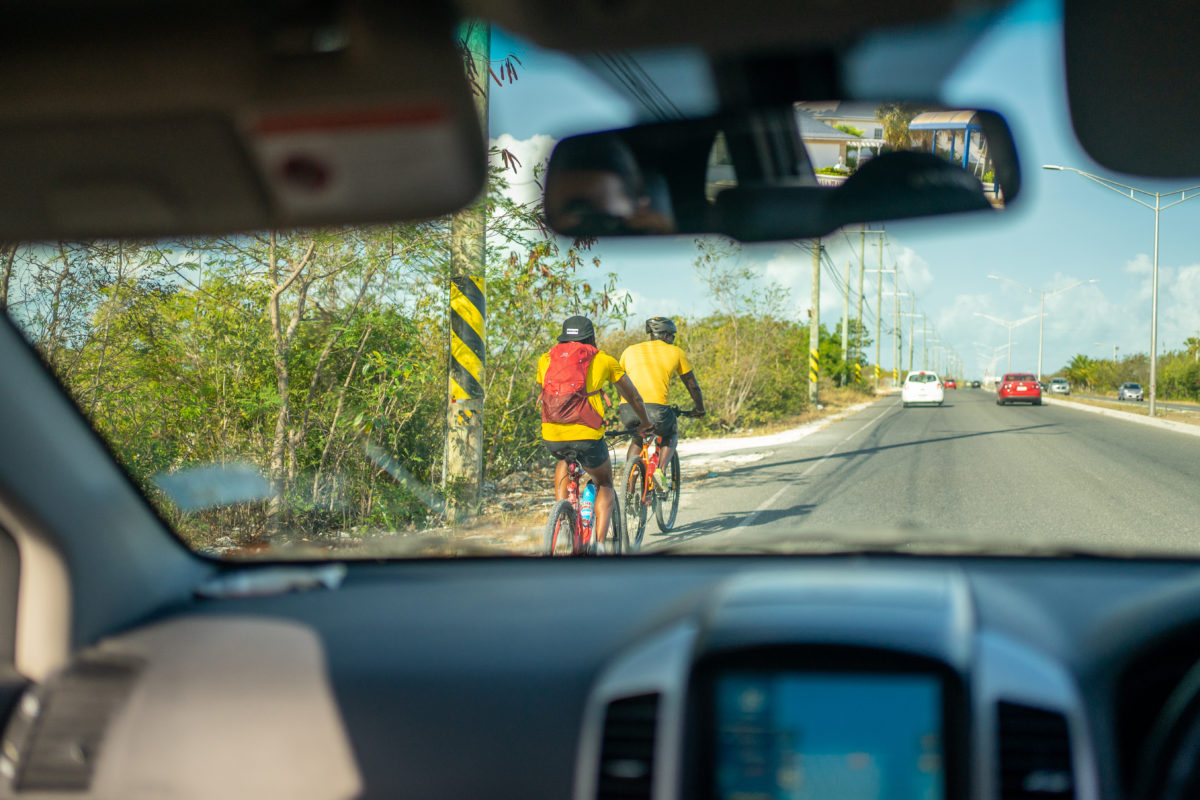 The next day I mounted my bike. Cycling was a welcome change of pace, as I find the activity to be one of my strongest. With minimal effort I was able to breeze through the next leg of the journey, keeping good pace until I finished an hour and a half earlier than expected. Soon after I retired to the harbor in North Caicos, prepping for the next stretch of distance, this time to be traversed by water. Paddling the next 500 meters, I continued on the Parrot Cay before hiking and swimming the remaining distance and ending up at Providenciales 70 KM later. It was here I was met with harsh winds, a strong and sobering reminder of what was standing in my way.

Finally, I made it to the fifth and final day of the expedition. At Blue Haven Marina, I began my trek with a 5km run. It was here I was met with a crowd of community members waiting to join me on my run, an uplifting sight if there ever was one.

The love and support radiating from them was immense, and certainly a welcome boost of morale against the worsening conditions. Previous hikes had placed a strain on my legs and the pain that emerged as I began my run was excruciating. This coupled with Chev Dixon’s already fast starting pace made for an agonizing run. 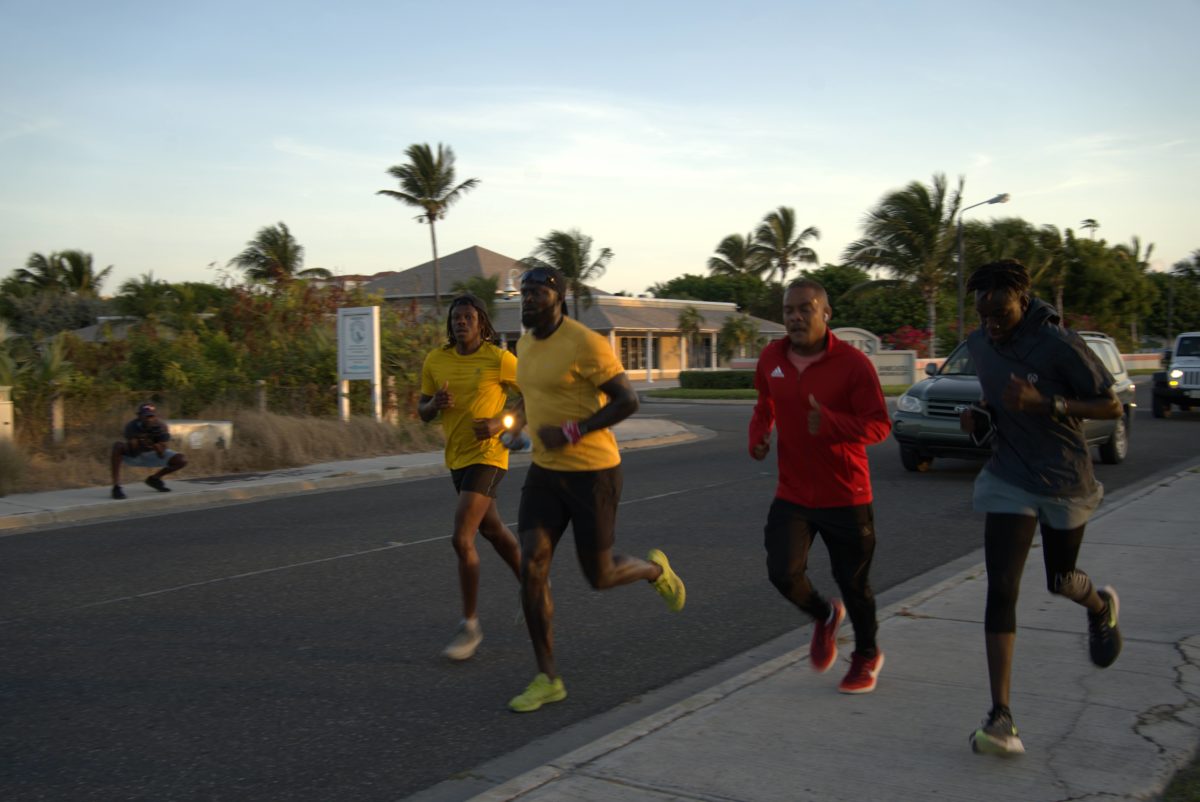 Thirty minutes after my run, I hopped on my bike once more and began cycling the length of Providenciales from Turks Kebab restaurant to Split Rock. The movements came easily as I took to the road, feeling smooth and comfortable as I continued on.

But I would soon find my limits tested again as, following the 5km run and 27 km cycle, a heat wave settled over the landscape. The temperatures grew to scorching highs, with oppressive amounts of sunlight bearing down on me. I found myself immobilized by these conditions for at least half of an hour before I was able to gather up my remaining strength to push ahead with the last leg of the expedition.

Steeling myself against the heat, I was able to kayak for the remainder of the expedition, a 14 KM paddle to West Caicos. The water was crisp and refreshing, revitalizing me as I finished out my journey on West Caicos beach, with nothing left but a roar of fanfare to greet me.

While this challenge proved to be a test of physical abilities, my intention with it was to bring attention to a bigger issue, that being environmental impact. Through my life my decisions have always been guided by a path of sustainability, something I attribute to my being a native to the Turks and Caicos Islands. With each of my expeditions, I want to shine a light on the beauty of the landscape and the people who inhabit it. Having been across the globe, my work continues to provide a message of a sustainable future, giving back to the communities and sharing stories of the people and places I have encountered in my travels. 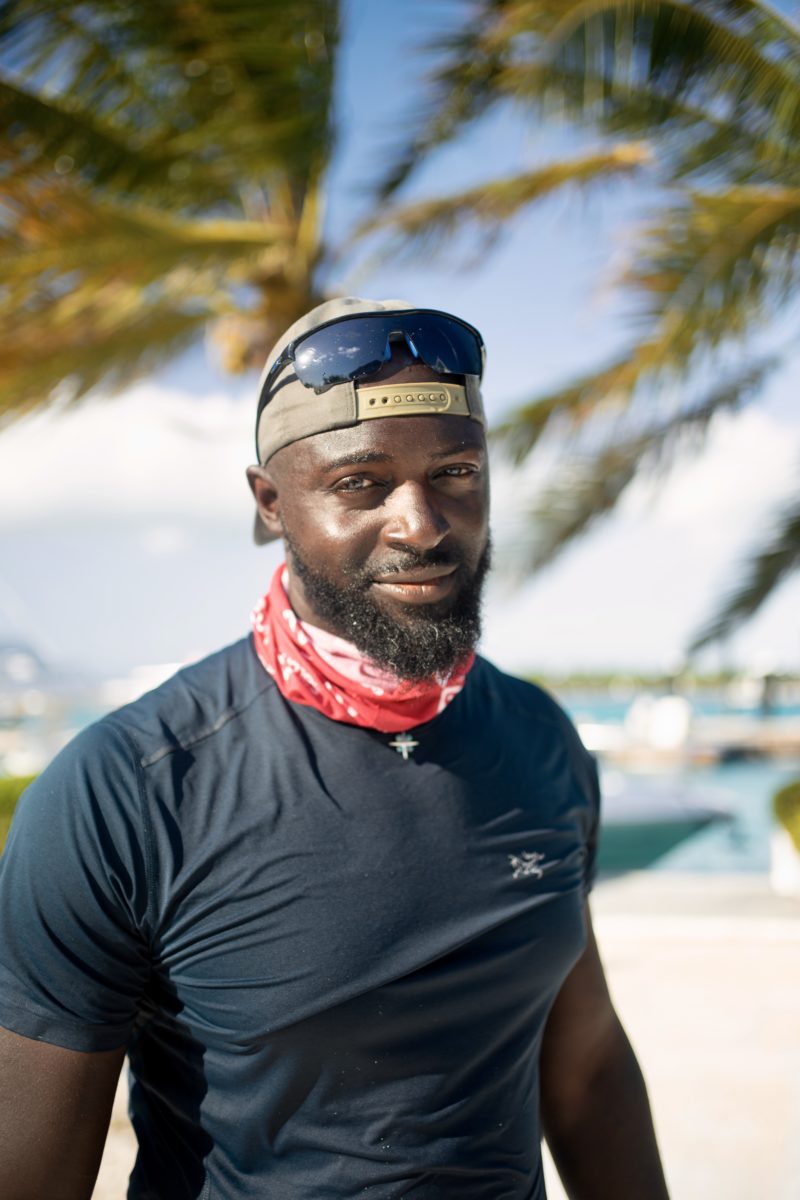 Mario Rigby is an athlete, eco-explorer, adventurer, author and speaker. Born in Turks and Caicos Islands, he spent his childhood in a small village near Stuttgart, Germany, before moving to Toronto, Canada at the age of 16. We’re proud to have Mario as an Arc’teryx ambassador in our Toronto Community.