Words and photos by Ravi Vora

Biting winds, deep snow, waking up before sunrise, spending the day on the side of mountains, and exploring unfamiliar territory – just my kind of vacation. I live in L.A. where cold and snow are not the norm in any season. As a commercial photographer, braving the elements and getting to new places is what I live for. Naturally when I was asked to head to Alberta to explore and shoot in Banff National Park, I was in. 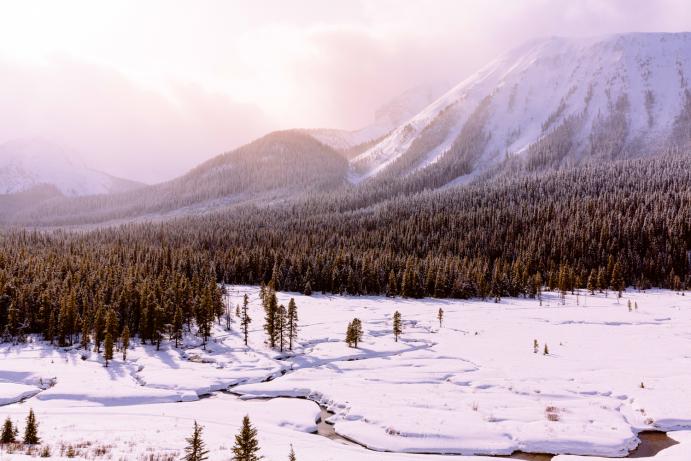 My interest in the area was sparked after seeing beautiful photos of the landscape during warmer seasons, but when the challenge came to shoot while skiing, well, that was certainly something I needed to be a part of. With the backdrop of the Canadian Rocky Mountains it would be a gorgeous but demanding task. Keeping myself – and more importantly my camera equipment – warm and dry was of paramount concern. So, Arc’teryx geared me up and I took on the challenge of photographing while skiing.

With the support of Travel Alberta we received some great guides, and I got to shoot with one of my best friends, Morgan Phillips (@morganphillips), which meant we were in for a good time. 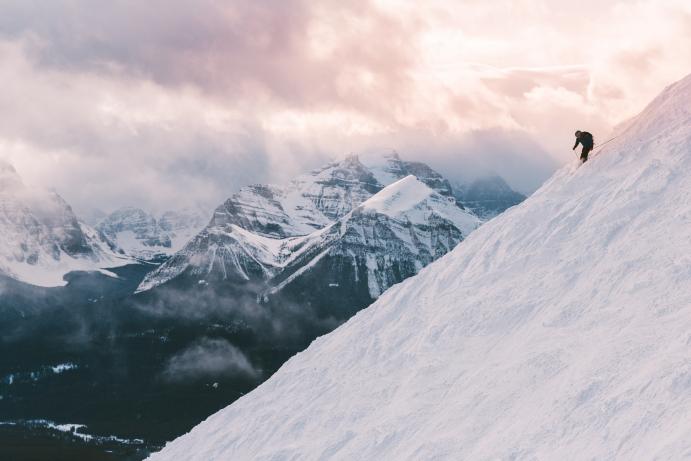 Chris, our expert guide took some time away from showing off his backyard to get a few frames in front of the camera.
Location: Lake Louise Ski Resort, Lake Louise, AB

Most people would set aside plenty of time to drive around and see the natural beauty, but we were on a schedule so we opted to scout our surroundings from a helicopter. During our flight, we witnessed the shifting weather first hand as clouds engulfed mountains and snowstorms drifted by. We decided to set the helicopter down on a frozen lake and settled in to chest-high snow. We threw on our snowshoes and hiked to the perfect vantage point for photos and a wilderness hot chocolate before taking to the air and headed out. 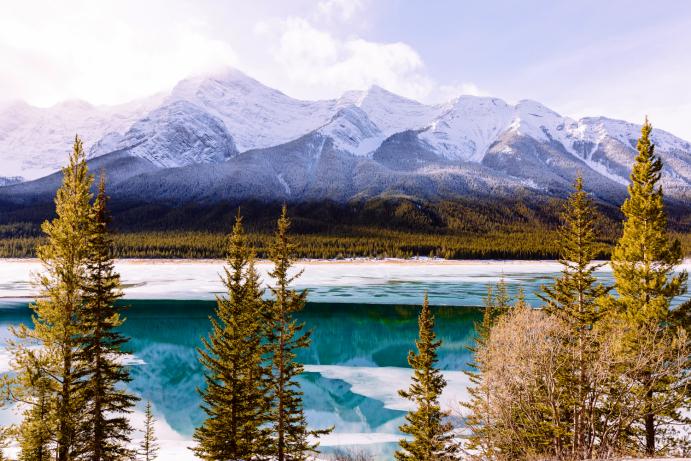 The bright teal of the Spray Lakes peaking through the ice.

The ski resorts were beautiful and mountains rose up in the background as we floated over the fresh snow. The sun would appear intermittently between snow flurries and gracefully dance over the white peaks as we chased it, cameras in tow. It wasn’t long before we were requesting access to runs that needed the go-ahead from ski patrol, all in the name of a better angle.

When not on our skis, we explored more of the surrounding area; bright teal lakes, to endless forests, to glaciers sitting atop mountains. This was some of the most breathtaking scenery I’ve ever set eyes on. When the sun broke finally through the clouds it brought out the true magic of the landscape. When it disappeared, the mountains caught the clouds and made for a dramatic display. 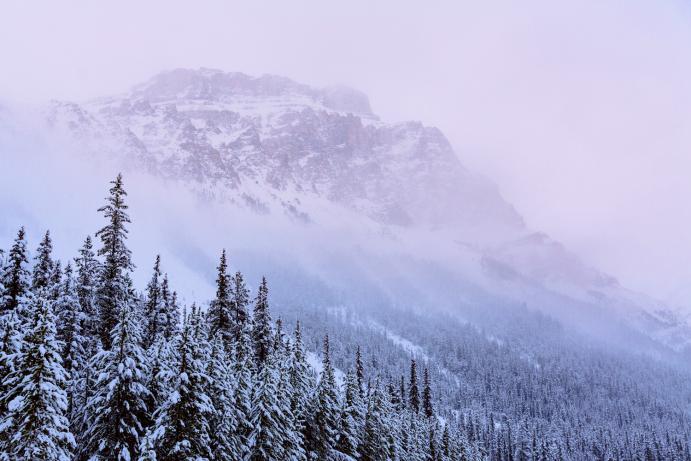 During a snowstorm along the Icefields Parkway.

Due to the nature of how extreme some of the locations were we only had one chance to pull off the shot, which left us with only the use of hand signals and confidence. We’d hold our breath, wave, the athlete would drop in, cameras fired, and then Morgan and I would take a beat, look at each other, and ask, “Got it?” As if it mattered.

We skied, climbed ice, snow-shoed, fed wolf dogs from the palm of our hands, hiked through chest-high snow and watched giant herds of elk move across the earth. It was hard to compare any other adventure in recent memory to the feeling of belonging it brought. We were in a truly inspiring place on this planet.

I may be back in Los Angeles, but I’m already ready to go back to Alberta.