It is February the 12th, 5 o’clock, and we’re surrounded by pitch black darkness. Temperatures are around zero degrees and the damp air I am breathing in bears all the common scents of the sea not far from here. The ice line we’ve come for has formed and is standing bright and high: “Fjåenefossen” as they call it, has built up despite the mild winter season: our local informant has sent us pictures and my twin sister Heike, Matthias and I immediately followed the call. We arrived in Eidfjord yesterday after two days of driving from the Oslo Airport through rainy, wet coastal scenery. Despite the low temperatures and the un-wintery ambiance we’re confident that by now, we know better about the Norwegian ice challenge and we’ve learned our lessons over the past years.

It is our fourth time here in Norway and we have grown an understanding of these giant ice lines, shaped and influenced by extreme spikes and drops in temperatures and the nearby sea. The formation of these huge Norwegian waterfalls is a delicate task; the warm airflow of the sea and the Gulf Stream keeps the winter relatively mild. When the ice eventually forms, the sculptures are often outrageous and can only simply be regarded as amazing. The ice quality and texture can change so fast: ice falls here seem to be very lively material and very treacherous as a result.

The mighty appearance of these ice walls is alluring: not only because of their colossal size and crazy formations, but also because of their often remote settings and beautiful colors, ranging from shady bronze to shimmering gold. It makes them appear like mighty gems glowing hideously out of dark rock walls. It is the minerals of the Fenland of the Hardangervidda, which dissolve themselves into the pouring water, that gives “Fjåenefossen” it’s golden glow. 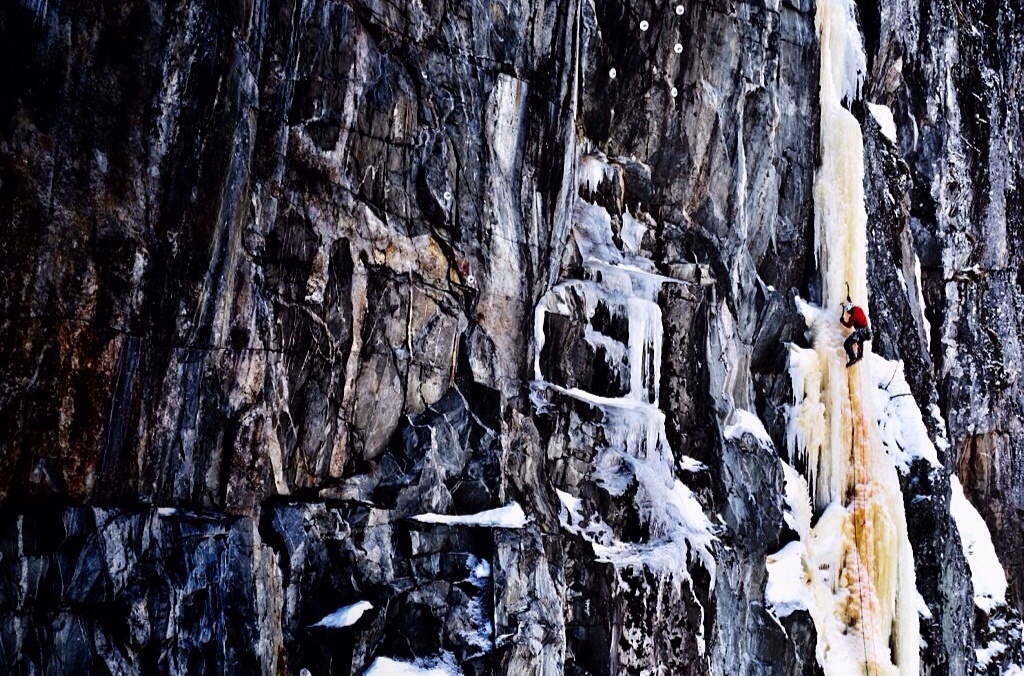 Perhaps it is that certain call of last real adventure that draws the real ice addict towards Norwegian Ice:

“In ancient times the eagles shrieked, down the mighty ridges of the heavenly firmament fell holy water [..]the Norns came, the ones that sculptured our heroes fate-[..] they crafted powerful threads of fortune, as in Bralund castles failed; they lay down thee golden ropes and banded them in the center of the Moon’s palace..

Patience and commitment, we’ve learned, are the two main qualities we have to bring in order to affront those giant lines in Norway.

Like the year before, the river we have to cross is not frozen. Unlike last year, Eidfjord has experienced a huge amount of snow fall and avalanches, so that the approach into the immense cirque seems possible. Nevertheless, I gain wet boots as I miss a stone and cross the running water hip deep. The water finds it ways from above and for the rest of the day I have to deal with soaked feet, cold and wet altogether. It does not matter.

No tracks can be found in the snow and it takes us nearly two hours to make our way through ice and snow before we finally reach the base of the climb. Before us, boulder sized icicles are the remaining reminiscence of the dynamic consistence of ice: the constant crushing of icicles from the ‘Twinfossen’ next to us shall become background sound on this epic setting. I start the first three pitches of smooth ice before Heike takes the lead. From the belay we see her crushing down big amounts of ice, cleaning a whole plate-layer of distrustful, thin ice. Basically it’s like she is digging a ditch through this incredible ice world. Following up we’re just stunned. “Only in Norway,” is her dry comment on a hell of a lot of work. The next pitch is a beautiful steep pillar and Matthias goes for it. There is a lot of fresh ice coming down, but Heike and I are safe in this cave-like belay. We listen to the constant noise of ice falling down from the ‘Twinfossen’ and the power of water rushing down the black walls. It is an incredible coulisse and feels very remote – a world of its own, filled with ancient powers and laws. The old sagas of the Edda seem to be still alive here. We keep following the pitch up and water is pouring over us. For me it feels more like deep-sea diving than climbing. There is one long more pitch of steep and brittle dry ice to finish the climb. Finally, we all reach the top and hug each other. It feels so great to be on top of such an extraordinary place with such a good team! As we soak in our surroundings our eyes are caught by an incredible line on the far left sight of our climb: the goal for the remaining days is instantly settled! Heike starts building the first Abalakov of the day and with five more we reach the bottom of the climb. As we begin crossing the river, I feel warm again and am relieved that I don’t have to care about wet feet.

Saturday 14th finds us abseiling into the huge gorge near to Vøringsfossen. It is a wild place and we gain the bottom with four abseils. As we wander along the black walls, we all feel the enormous energy of this place rising on both sides of us. Many ice falls have already broken due to the enormous water pressure, but one line on the far left seemed to be still intact. Big ice boulders scattered on our way immediately arise our senses to full alert. Heike starts for the first pitch, but as the first 30 meters roll out, the sullen grey sky starts to break and the sun emerges. This is the worst case scenario. As Heike climbs on, more and more ice plunges down from above. Matthias and I start to get worried. By following up, we suddenly hear a cracking noise followed by collapsing ice. Big chunks of ice start whirring around us like falling grenades. We know there is no way to carry on. We start withdrawing as fast as we can. Adrenalin rushes in our veins as we run down the slopes until we eventually reach safety. This is definitely not ideal timing for this ice-fall. Its days are numbered as the sun feasts on it like it is doing today. We switch our objective that day with some good climbing on the sun protected site on the ‘Dalberg Fall’.

We take another brief look down into the gorge later on. After careful consideration, Matthias decides not go on it again – a huge crack in the upper part is obvious now and the fall too unstable and at high risk of coming down. We settle for our other project, the un-climbed new line in the Cirque around ‘Fjåenefossen’.

On February 16th, we leave the warmth of our stay and hike up the well-known path towards our destination point. Once again, we walk together through the dark, wondering what this day will bring. There were strong winds overnight and they are still blowing restlessly. Temperatures have fallen far below zero degrees: winter is back!. We cross the river silently, eager to retain dry feet. This time it works out well for all of us. We gain ground very fast on a wind blown snow crust and arrive at our climb nearly one hour faster than the last time. We prepare for the climb in the shelter of a Bergschrund-like cave: three long gully-like ice pitches and one last snow climb brings us to the heart of this climb: a bizarre ice sculpture of incredible wild and chaotic formations, created by pillars of barely attached Medusa Heads and unstable, hanging tentacles: the untamed tentacles are gleaming like teeth in deep yellow, while the ice beyond is blinking dangerously in white silhouettes. It reminds me of some kinds of frozen brothers of the bizarre “Lion’s Mane Jellyfishes” living in icy waters, the largest known species of Jellyfish. Theses living creatures use their stinging tentacles to capture their prey and here and now, in this world of crazy ice this incredible creation of nature seems of equal power.

We arrange the ropes in severe silence as Matthias starts preparing for the ascent. 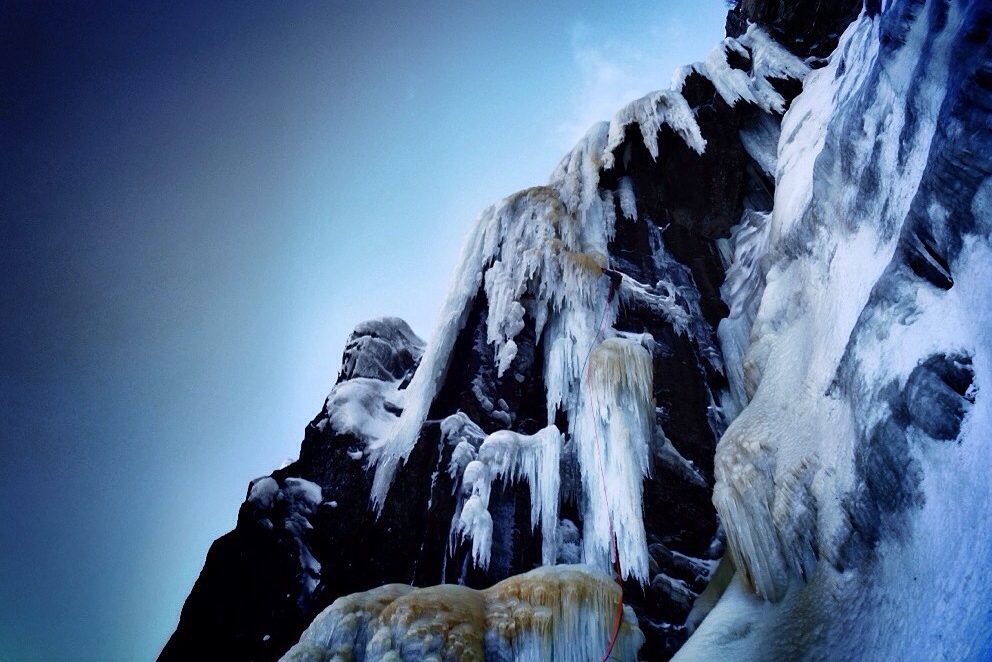 From a rock protected place I watch Matthias battling his way up, the hollow sound of small icicles crashing down in a chaotic environment are contrasted by his fast and precise movements. At some points, it is a challenge for me to coolly concentrate on my camera work, but over the years I have found ways to stay detached and calm.

Still, when Matthias reaches the top of this crazy climb relief is floating all over me like an antidote. Soon Heike and I are ready and start climbing up the now tamed beast. On top we give each other a big hug and a high five. Due to the heavy winds surrounding us and according to the famous sword in the Elric Saga we name this (highly probably) first ascent “Stormbringer”.

With heavy snowfall setting in the following days, all possible additional climbs have become impossible because of the huge avalanche danger. Our attempted line in the Vøringsfossen gorge falls down on the predicted tear line just the day after our attempt.