A year ago one evening in Sheffield, we watched two very inspiring climbing videos; one of Sasha DiGuillian making the first ascent of Rolihlahla and the other of Paige Claassen making the first ascent of Digital Warfare. They looked like world-class routes in an incredible place so we decided to visit these areas in South Africa. We made a plan, booked our flights and a year came round quickly.

We flew into Johannesburg and drove east to Waterfall Boven in the Mpumalanga state, which translates to ‘a place where the sun rises’. A few weeks before our arrival they had an unseasonable amount of rain, which meant everything was just turning green and looked beautiful. 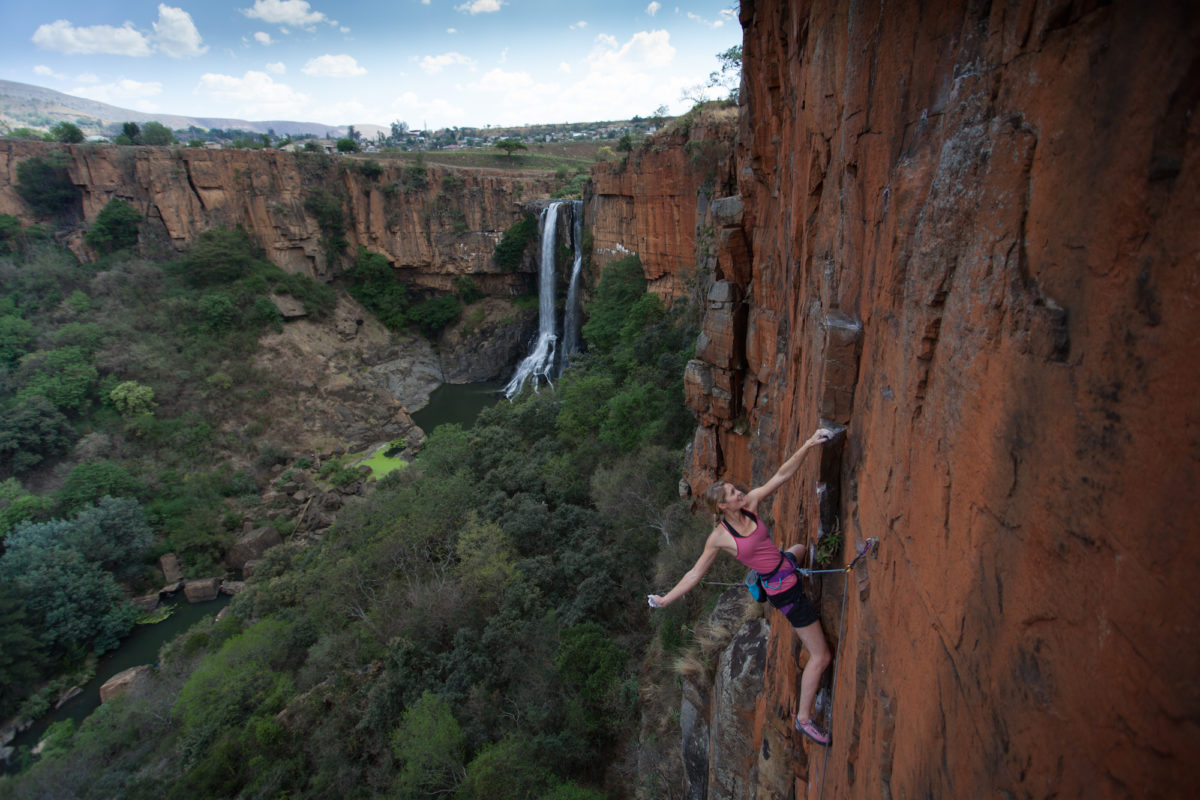 We stayed at Tranquillitas Farm, which was perfectly situated on top of the crags, and it conveniently only took 10-15min to walk down from the door of our hut! The little chalets were basic but perfect for what we needed as we spent most of our time living outdoors. Breakfast in the sunshine, followed by reading, yoga, climbing until dark with a BBQ to finish the day – only going inside to sleep. This is one of the things we both loved about the trip, the time spent in the fresh air.
Katy and Mina 6c+ – photo Rob Greenwood. 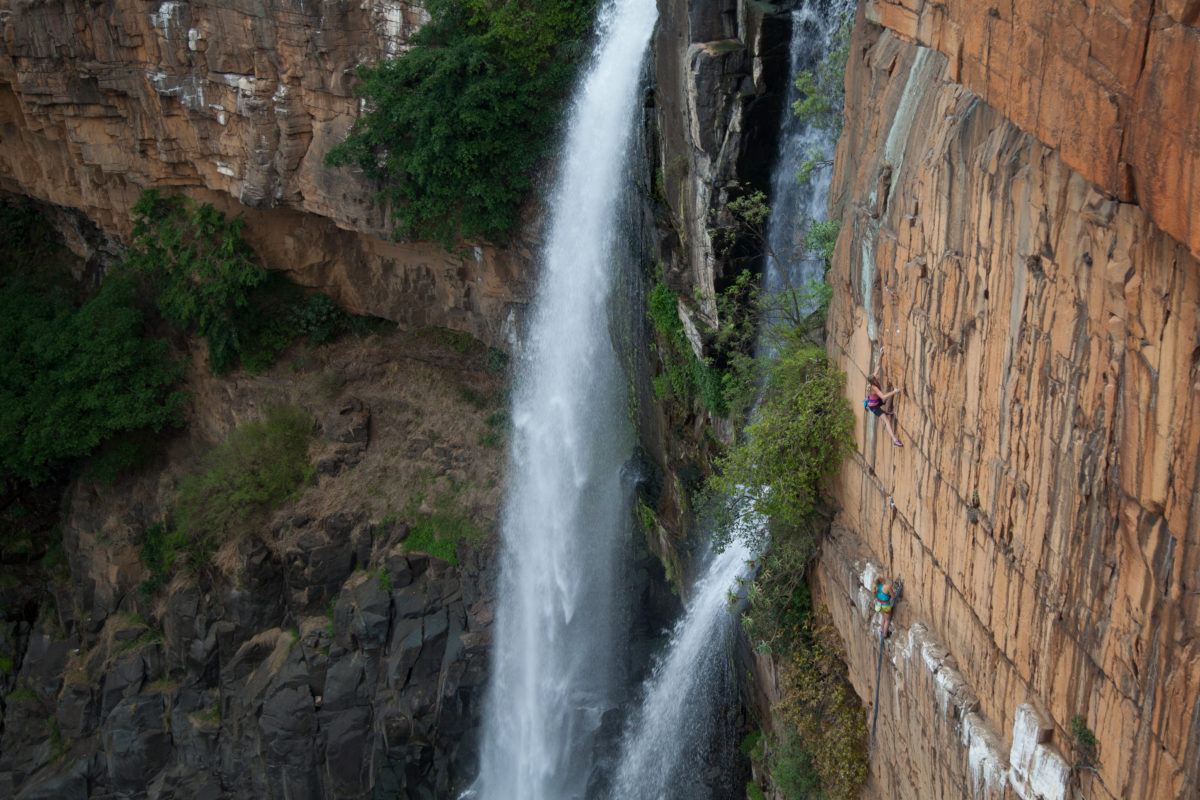 The crags are at 1800m, which is higher than anywhere in the UK and we definitely noticed this during the first few days of climbing. The valley is filled with beautiful red quartzite walls and the style is reminiscent of trad climbing. Big features such as arêtes, corners, cracks and grooves made it feel like we should be placing gear rather than clipping bolts. The area plays host to five-star routes from 6a – 8b+, meaning plenty to go at. Some of our favourite routes were long and interesting warm ups. We spent an initial two weeks in Waterval Boven and both managed some mileage on the classics as well as couple of mini projects. Some of the highlights include Lotter’s Desire, Bikini Red, Toolbox, Endless Summer and Urisk the Rustic Brownie due to either the location or incredible climbing. We both got our teeth stuck into something for a few sessions. 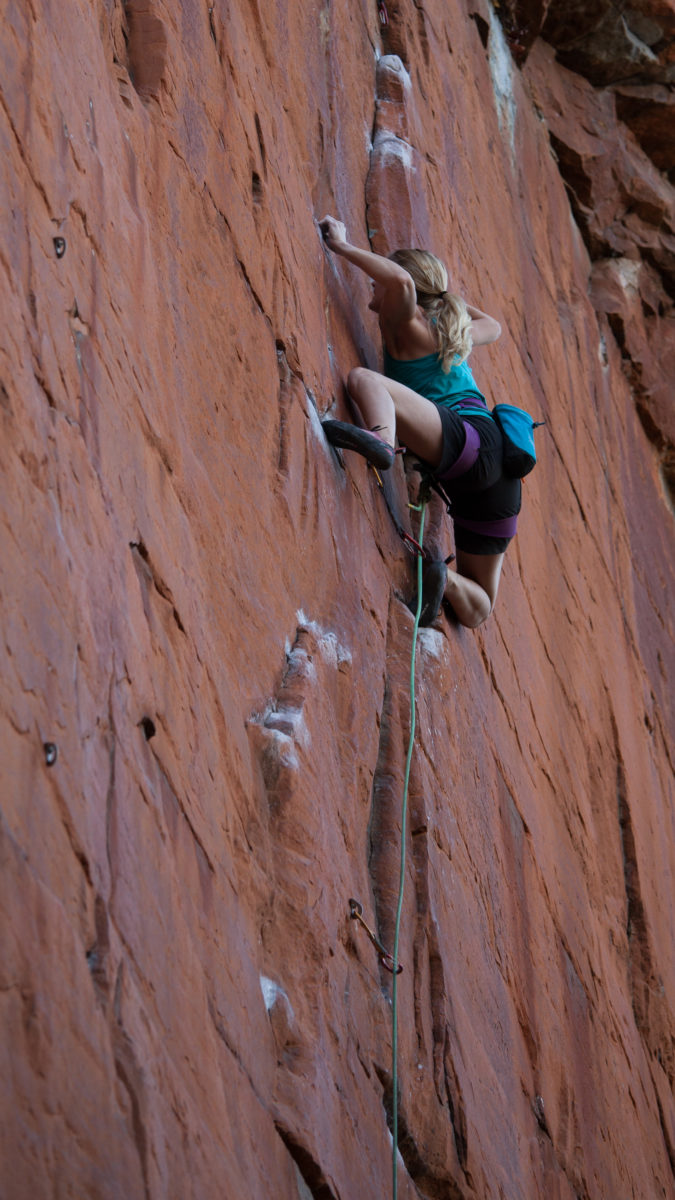 “I managed to climb the classic ‘Snap Dragon’ at Superbowl. Having been struggling with a long-term injury I had to lower my grade this trip and Snap Dragon was a perfect long and pumpy route to try. It is a route of two halves, the first half is a beautiful wall climb following a blunt flake line to some jugs then a steep and pumpy finish with the redpoint crux right at the top,” recalls Kat Whittaker.

“I got stuck into Godzilla, a steep (for Boven) endurance 8b with a 10-12 move boulder crux at three quarters of the way up. It’s a brilliant route, having a bit of everything; technical moves, bouldery sections, a good rest to test recovery and a very gratifying slap to a mega jug at the end of the crux. I thoroughly enjoyed trying it and sent it when I wasn’t expecting too, which always feels nice!” recalled Mina Leslie-Wujastyk. 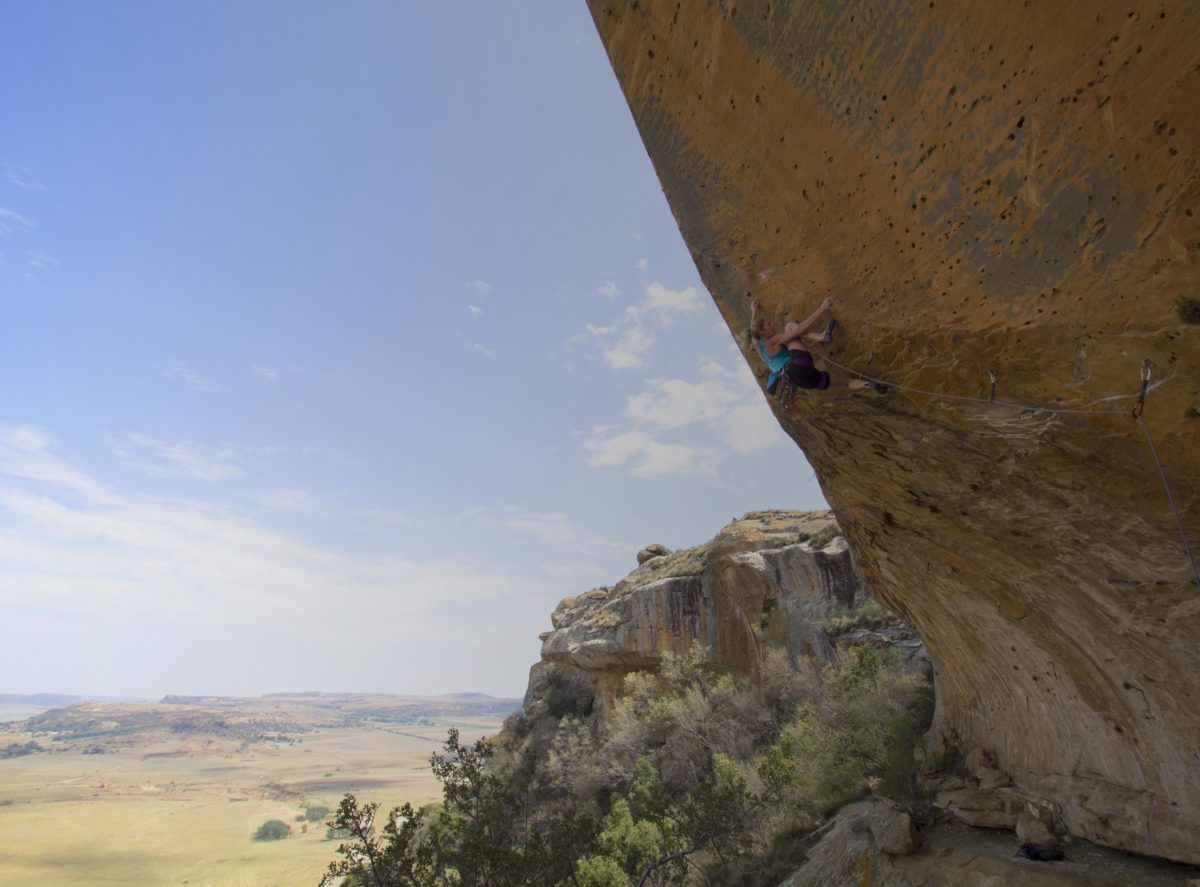 After two weeks we headed southwest to The Free State in a very, very full car. There were five of us plus luggage, climbing gear and all of our food! Every foot well was full of tins, milk bottles, cabbage or rucksacks making the six-hour journey feel pretty epic. We arrived at some self-catering chalets aptly named ‘Ben Nevis’ situated underneath the impressive crag ‘The Wow Prow’. ‘Wow Prow’ is basically a giant boulder perched on top of a hill. The orange rock is covered with pockets and beautiful dappled grey streaks. The pockets are sneaky as it is easy to think there is going to a big hole, but often they have a stopper rock inside resulting in a disappointingly small crimp instead. The line of the crag is ‘Digital Warfare’ that has just enough pockets to make it climbable; we agreed it is one of the most impressive climbs we have ever seen. ‘Wow Prow’ was pretty tough and a combination of early starts, hot temps and hard grades meant we didn’t succeed on much. It was totally worth a visit though and we had a great time playing around on these wonderful lines.

After a week at the ‘Wow Prow’ we headed back to Boven where we spent our final few days of the trip. All expectations aside (mostly), we had a lovely relaxed time enjoying the climbing and the sun before heading back to the UK.