1978 – Latok I, 2500-meter high North Ridge – Jim Donini, Michael Kennedy, George and Jeff Lowe retreat about 100 meters from the summit ridge after 26 continuous days spent on the spur. “This is one of my favourite high altitude climbing stories”, says Luka Lindič. This year Luka got a chance to take a closer look at that piece of mountaineering history.

At the beginning of July, Luka Lindic and climbing partner Luka Krajnc joined Janez Svoljšak and Martin Žumer to set off on a month and a half long expedition to Pakistan. With two other teams in the Panmah Muztagh range, the Choktoi Glacier was busier than usually. The team was also about to encounter more high temperatures similar to what the saw in Alaska, and again it would dictate the order of events. The group started their acclimatization process with the first ascent of the south buttress of Biacherahi North (6050 m). “We climbed to the col between Biacherahi Middle and North in the early morning hours. We then decided to call it a day as the conditions became too dangerous – high temperatures triggered numerous rockfalls all around us.

We put up our tent and spend the rest of the day waiting. At first light the next morning we started climbing up the rock buttress. After the first few easier pitches the terrain got steeper, but we found good lines and climbed free the whole time. The rock quality was very good except for two pitches climbing on loose flakes, but never harder than 6c. We reached the summit in the late afternoon and enjoyed the breathtaking panorama. After having a quick brew and snack we started rappelling.”

Everything went really smoothly until we hit the long traverse approximately 200 meters above the col and their rope got stuck somewhere in the dark. The Slovenians had no other choice but to cut off the remaining loose piece and keep on rappelling. Safe and sound back at base camp, Luka realized that almost all other climbers had already left. The team also knew that their night descent had cost them some of their gear. Fortunately, there was still one more team in the lower base camp area – the Huber brothers. “Our meeting with Alex, Thomas, Dani Arnold and Mario Walder was proof that a true climbing spirit was still alive. Not only did we spend an amazing evening in a friendly atmosphere, they offered us their ropes, nuts and food they didn’t need any more. We are very grateful for their support.”

With enough gear the team could relax a bit and start their second acclimatization climb. “We decided to go for Baintha Ahrta (ca. 6400 m) because it’s one of the highest summits around at the same time offering reasonably easy climbing. When we reached the plateau between Baintha Kabata (6250 m) and Baintha Ahrta, the clouds encouraged us to try the east face of Baintha Kabata, which seemed even faster to climb.” Unfortunately, the sky cleared up and the team had to speed up to avoid falling rocks. They reached the summit ridge at midday and climbed another two rope lengths to the top. Before heading back to base camp they spent one night acclimatizing 30 meters below the summit.

The team was ready to try the north ridge of Latok I (7145 m), the line that has already been attempted by many other climbers. From the beginning bad luck did not spare Luka Krajnc, who apart from being allergic to sun had started experiencing some eye problems. Nevertheless, the team progressed steadily while hauling heavy backpacks up steeper pitches. “At the end of the first steep part our tent fell while hauling due to miscommunication. At first, I only heard Luka swearing and I immediately knew something went really wrong. He wanted to go down immediately, he didn’t feel like committing to the climb without a tent, but I was too into it to even think of giving up. What came to mind was one of the 1978 photos I’d seen some time ago picturing the guys in a snow cave high up on the mountain. ‘We’ve got a shovel’, I said to Luka. I convinced him that we should continue at least a bit and see how it went.” In the afternoon they were a few pitches below the end of the rocky part of the ridge, but Luka’s eye was not getting any better and the team spirit was falling. They decided to go back.

“We spent a few days at the base camp thinking about what to do next. We were without a tent so the idea of Latok I started to slip away. We discussed the idea of us and fellow climber, Kyle Dempster trying the north face of Ogre II together. After hearing Janez and Martin’s report of crazy rockfalls all over the face, our hopes were dashed. It seemed that the only safe line in the valley was the North Ridge of Latok I. I believed the conditions up there were really good and I was determined to try again. Meanwhile, Janez and Martin got ready to leave and offered to lend us their tent. I still had to convince Luka, who didn’t seem willing to give Latok another go. The moment I thought it was over he changed his mind and declared his readiness.” 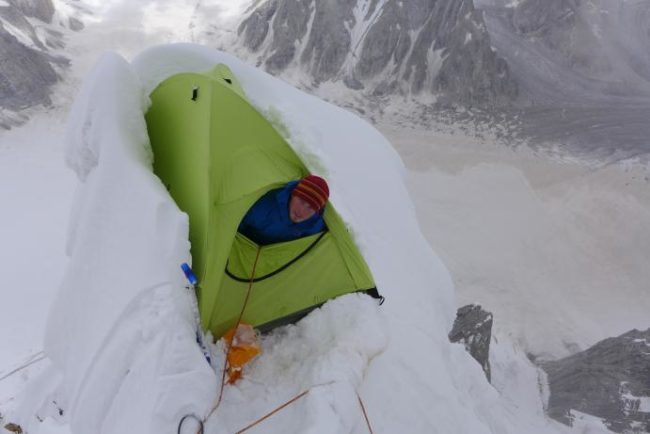 Soon the two were back on the ridge and moving fast, finding an old backpack full of food and gas along the way. They continued up the icy slope to the top of the rock step and pitched the first bivy. That night brought a few centimeters of fresh snow and the following morning the team was forced to set off much later than expected. “The conditions were still very good and we were climbing mostly on moderate ice. In the late afternoon we were already above the next step, where most of the parties before us had to turn back. Our only problem was that it started snowing again…” Despite a heavy snowfall the Slovenians stayed positive, but after forty hours of deteriorating conditions they had to face the bitter reality once again. While they were rappelling, snow accumulation hit 80 centimeters… A couple of days later they were back home.

“We came back home from another unsuccessful Choktoi expedition and I can’t deny the bitter taste of failure. I believe that if it hadn’t been snowing so heavily, we would have had a good chance of success. But there are so many ‘ifs’ in the high mountains… And this uncertainty is what makes high altitude climbing so special and what makes me come back again and again.”