A word to the wise: no matter how tough you are, do not challenge Michelle Parker to a cold water immersion stand-off.

“I'm kinda competitive”, she admits, in a chilled out SoCal banter that belies her intensity. “And I'm kind of a stubborn person too.” 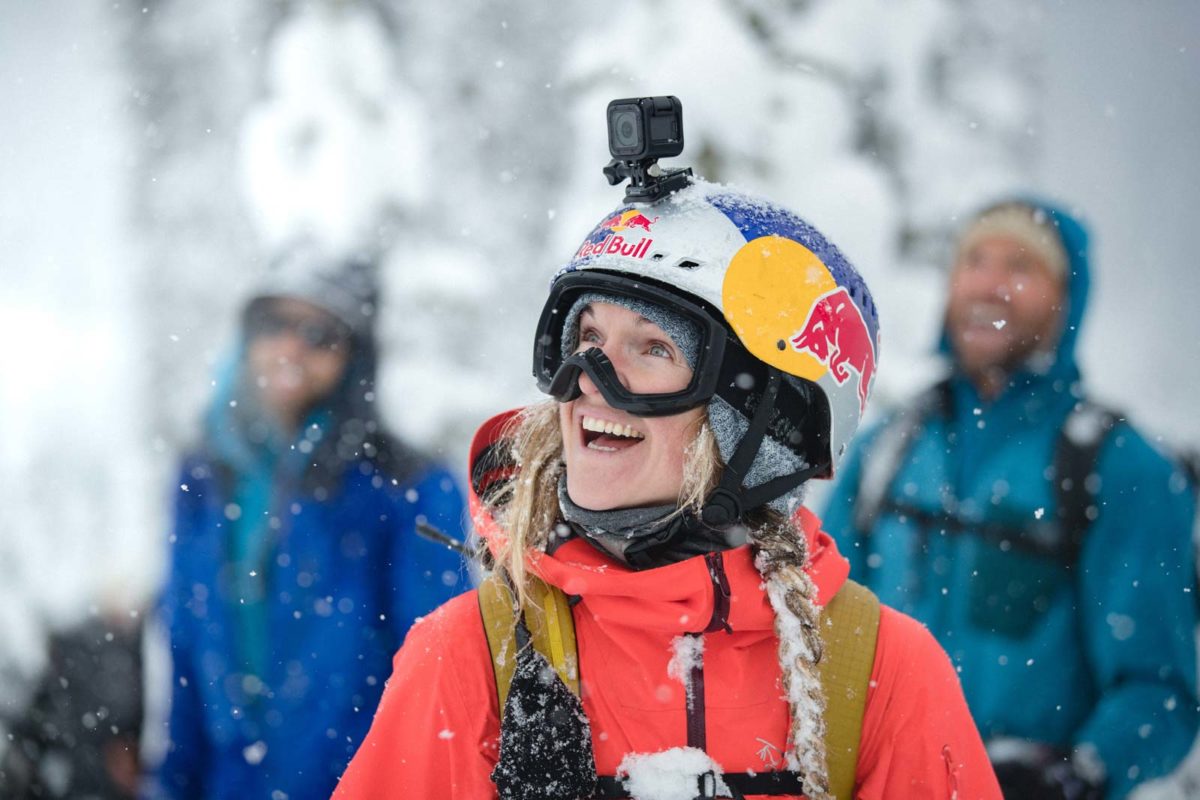 Pro skiing life looks glamorous, but it takes a ton of grit, too – a willingness to be without structure or routine, to go with the flow, to pick up and charge the moment the hammer strikes, to be still and calm when the conditions crap out. It requires the ability to get up at 3:45am and hit the sled access trail before dawn, ride the machine for 20 miles, then skin up your line and shred it like it’s nothing, before getting home at 10pm and getting up the next day to do it again. Not to mention the ability to drop in and arc a physics-defying line down a mountain face.

Also, when you’re obsessed with keeping up with Eric Hjorleifson on the skin track, you have to be hyper-aerobically-fit.

5 foot 2 and ¾, she jokes that when people meet her they comment, “you’re shorter than I expected,” but this woman is not to be under-estimated.

So if you’re going to do battle with her, you better be, you know, elite. And not just some random guy at the spa.

“I love the hot-cold therapy,” says Parker. “My record this year is two and a half minutes in the cold pool. I’ve been enjoying having a spa pass in Whistler. It’s self-care. It helps keep the balance when you’re on the road.” 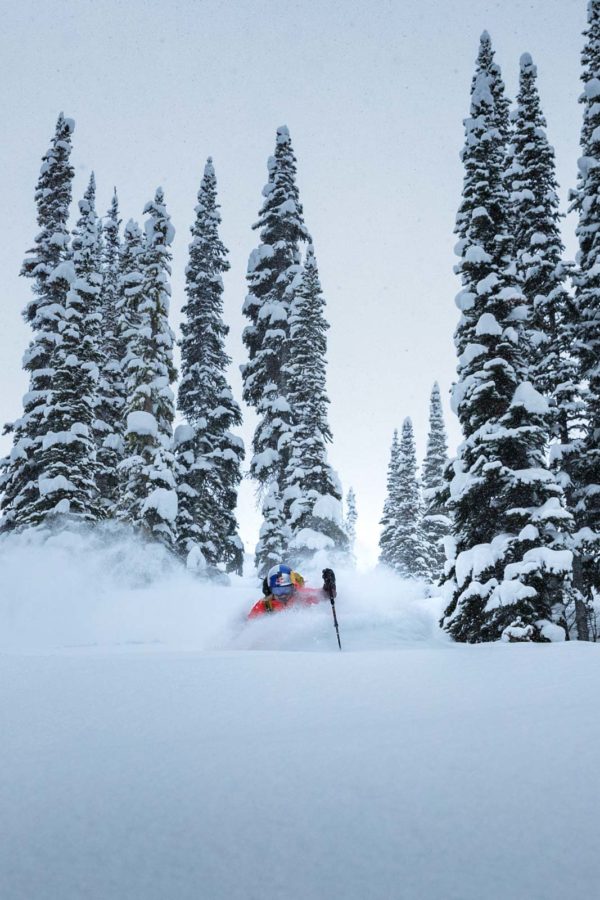 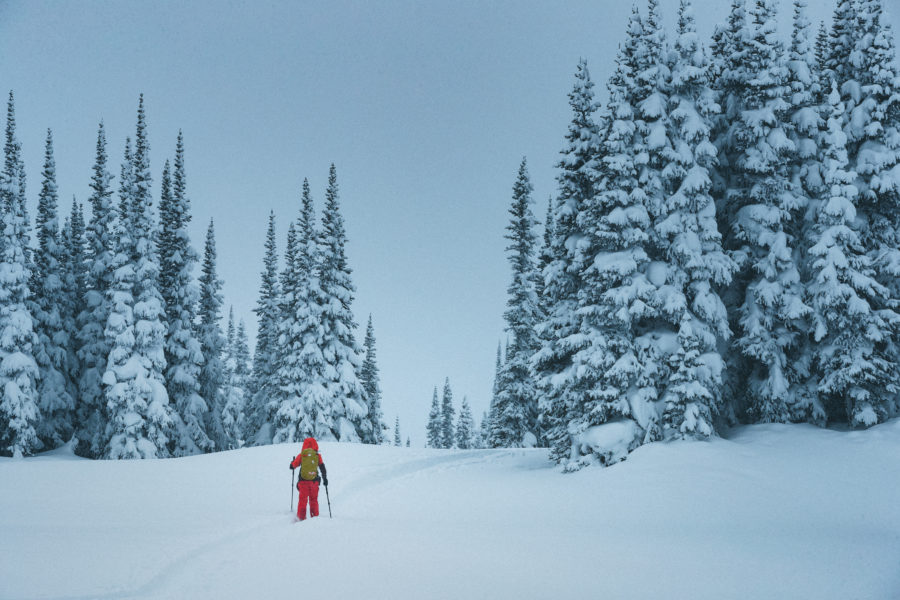 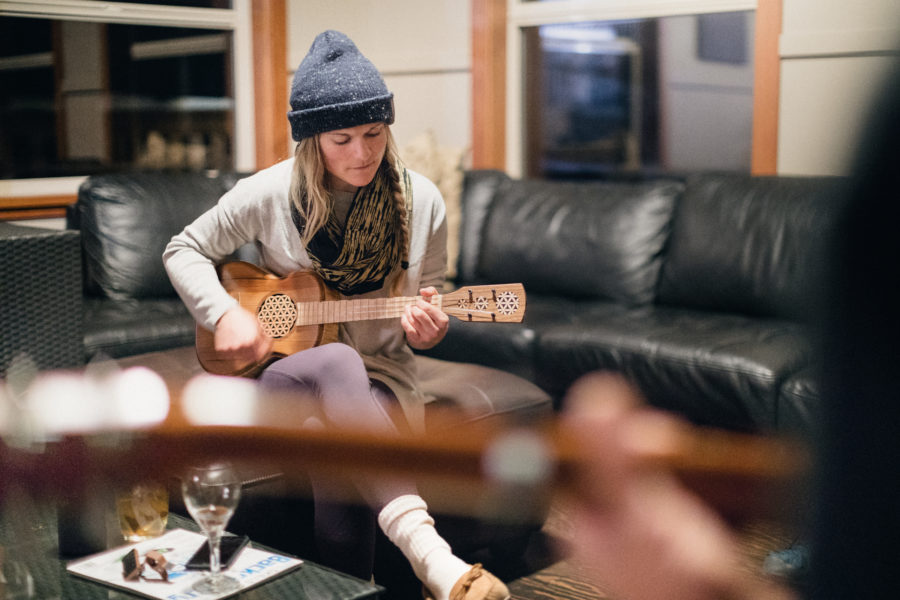 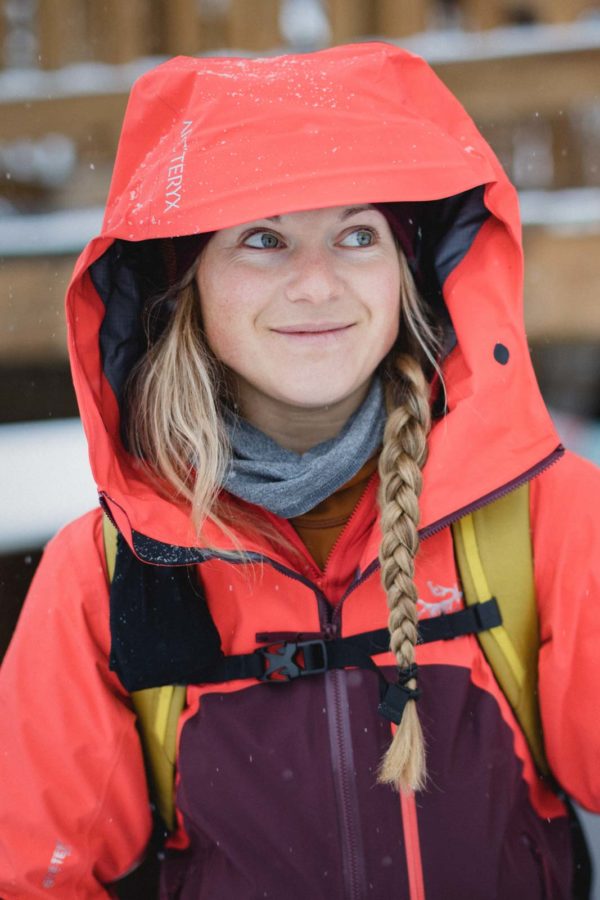 Pemberton became a home-base for her last winter, after Red Bull gave her the greenlight in December to develop her own webisode series, with Squamish-based Reel Water productions. The Squaw Valley raised athlete spent the winter bouncing from Pemberton to the interior, to Japan, to Revelstoke, to Alaska, to Chamonix, always bungeeing back to her Pemberton crash-pad at fellow athlete, Mark Abma’s house.

One down day, she’d passed almost a minute sitting in the cold pool at Whistler’s Scandinave Spa. The benefits of hydrotherapy come from chasing a session in the sauna or spa with immersion in a cold pool, followed by a period of relaxation. Most people splash around in the cold pool for a few seconds before shiver-scurrying out to the firepit or the reading room.

“Two guys got in. One made a fuss and got out straight away. The other was about to get out when he noticed me, and he just kind of settled in. I was like, ‘oh, it’s on now.’”

“The dude kept looking at me expecting me to get up. I was like, I’m feeling good. I could be in here for five minutes.” She laughs, “At one point, he started checking his pulse.”

As she got out, her boyfriend, who’d been casually observing the interplay, gathered her up. “I thought I was going to have to do CPR on him.”

That blend of likability, humour and toughness have stood Parker well over a 15 year pro ski career that started when, as a 16 year old riding the terrain park in Squaw Valley, she was scouted by her first sponsor. “I thought you were a boy, until I saw your braid. But I saw you hitting these rails and I’d love for you to ride for my company.” It was Jason Leventhal, the founder of Line skis and he supported her first entry to the slopestyle at the US Open.

“I’ll give it a year,” she told her dad as she finished school. Parker’s father is a former pro tennis player and coach who understood athletic passion and never once pushed her to be anything else. 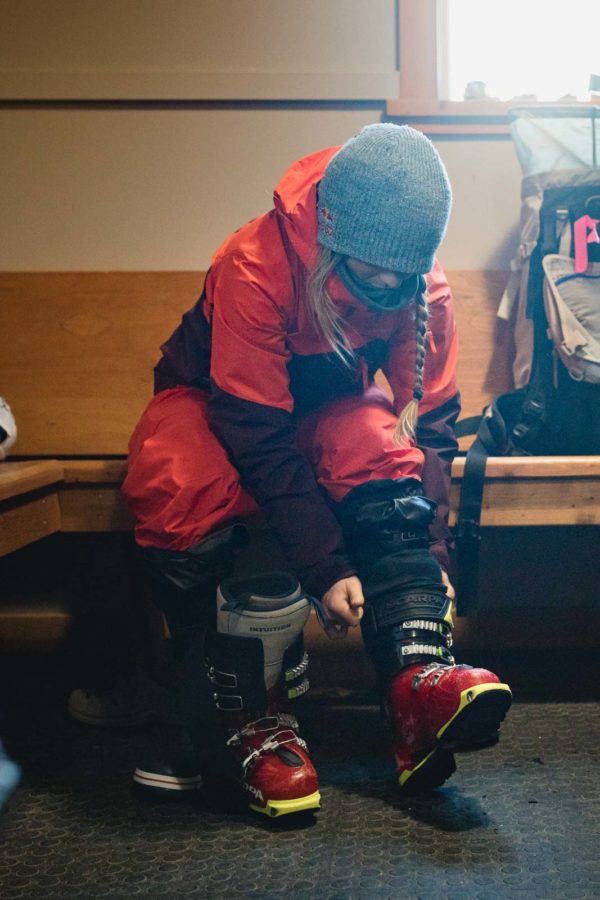 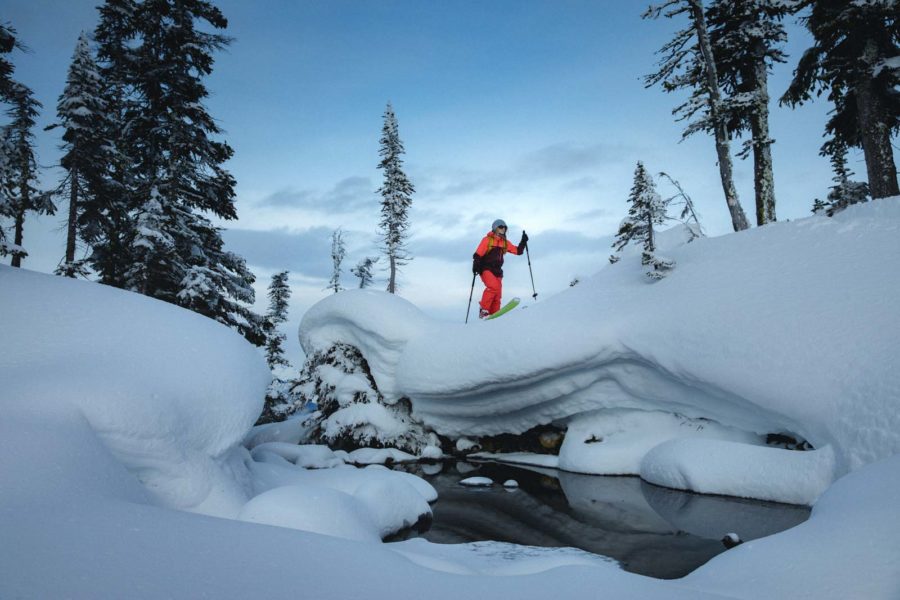 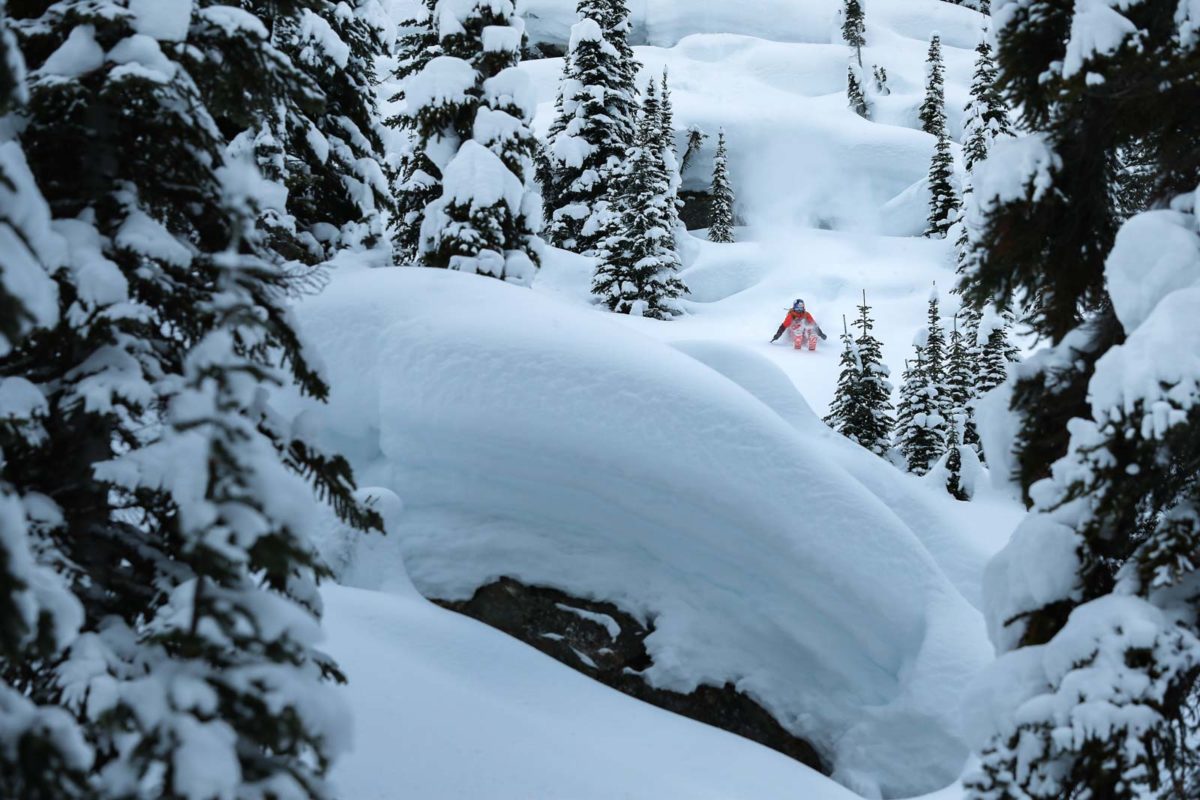 Over fifteen years, she’s ridden the ups and downs of her chosen path – deaths of friends, injuries, loss of sponsors with a zen kind of acceptance – “I’ve got the happy gene,” she says, acknowledging the luck of her constitution. Her only real wobble happened by the bedside of a boyfriend who sustained a traumatic brain injury. His four emergency brain surgeries rocked the then 23 year old, enough to call her dad and tell him she was quitting skiing. “I’ve over it,” she told him. “I’ve already lined up another job. I’m out of this sport.”

He talked her down. “This is your passion. Don’t make any rash decisions right now.”

She stayed in the game, but she knows there are stakes to the career path she’s chosen. “Big time. It’s in my face. Death. The high stakes for injury. It would be impossible to ignore. I think it’s healthy to think about it and to digest that. Especially with ski mountaineering or some of the things I’ve done recently, not taking unnecessary risks is very much on the top of my mind.”

Parker has just come off the busiest winter ever – she came back from a knee injury to throw down an incredible performance in Drop Everything, and leveraged that bankability into securing her own webisode series for Red Bull. She was also shooting a movie with several other female athletes with Matchstick Productions, teaching avalanche clinics with her organization SAFE AS, doing her first public speaking gig. “I’ve never been so busy in a winter,” she says. “Two huge dream projects happening in the same year.”

It was stressful. “I was kind of pinned.” But she kept reminding herself that everything will go as it will go.

“When I was in high school, I loved to read, and one of the first things I got into reading about was Buddhism and Taoism. Being like water, going with the flow, being present – Taosim really resonated with me. Not having expectations is another Taoist perspective. I didn’t pursue skiing because it’s a monetary thing. It’s my passion. That’s been my rule since day one: you have to have fun with this. If it’s not fun, then it’s not worth doing. Not having expectations lowers the amount of pressure you put on yourself. The pressure you experience is not coming from your sponsors, it’s not coming from the film company, the photographer. It’s coming from yourself. If you can recognize that, and separate that, then you’ll be much more happy.” 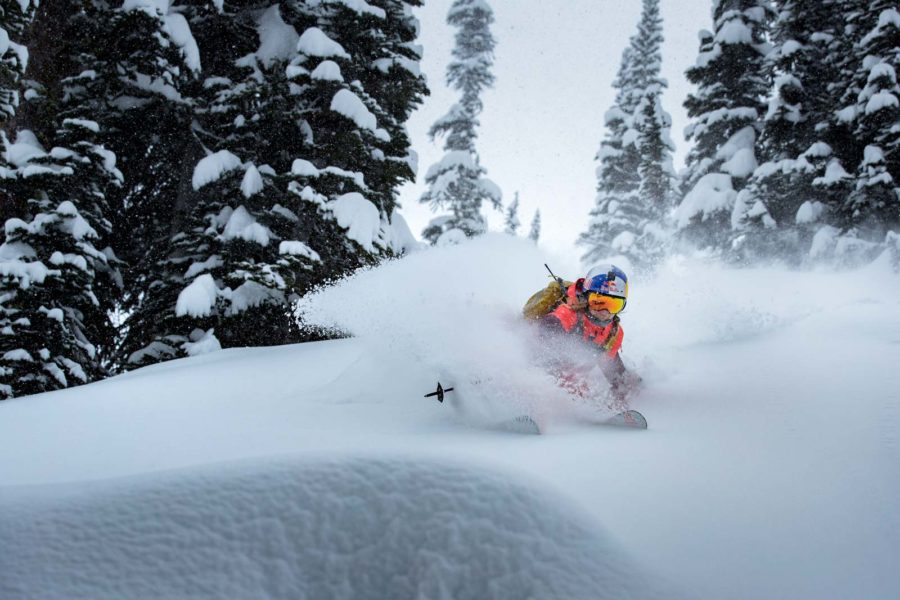 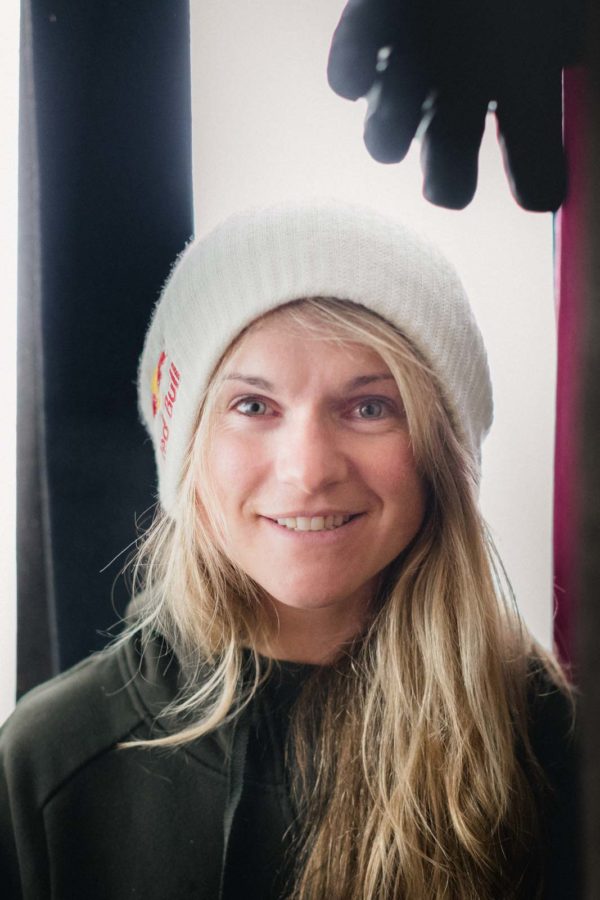