Kai Lin: Out On A Limb
By: Lisa Richardson

Inspired by mountain goats and a desire to help people, an industrial designer forms and unlikely alliance with an adaptive climber.

Empathy, efficiency, and a willingness to adapt — inspired by mountain goats and a desire to help people, two strangers forge an unlikely alliance to serve up a holy grail for adaptive rock climbers – a badass prosthetic foot, that won’t just level the playing field, but will dish up, if not superpowers, then a real sense of empowerment. Which is almost the same thing. 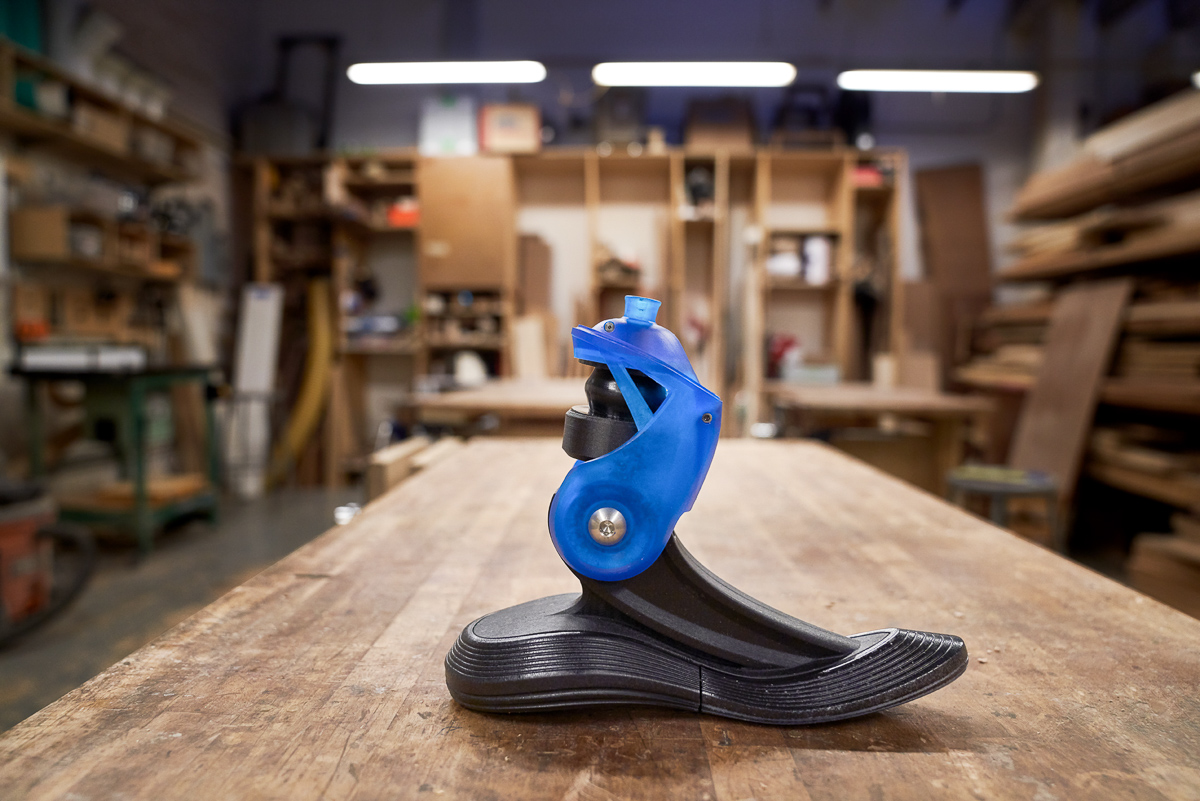 Climbers Craig and Cyndy DeMartino live at the bottom of Colorado’s Big Thompson Canyon. Where the canyon comes into the narrows, steep shattered granite rises up on both sides. There’s no trail out. If you were to put on your climbing shoes, and try to climb up the walls, you’d be clambering up 5.8 or 5.9 class rock. Often, the DeMartinos have been stopped in their tracks as a family of mountain goats picks their way down the steep ledges to take a drink at the river. The couple stop, sit, watch, marveling at the goats’ sure-footedness.

“How the hell are they not falling? Imagine being able to move like that?” 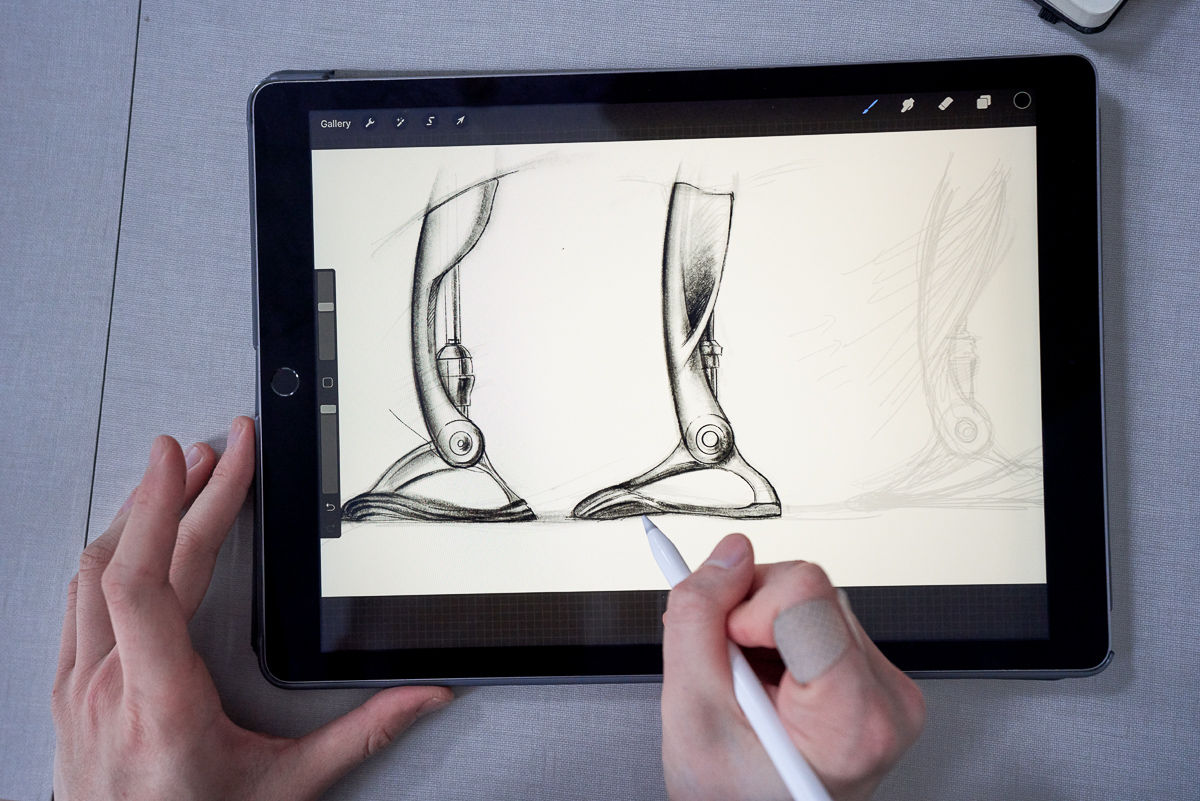 “The human foot does thousands of things every minute that we don’t even know about,” says Craig DeMartino, the first adaptive athlete to climb the Nose in a day.

If you amputate something of that complexity and sophistication, you simply cannot replace it with an artificial limb. “Someone told me to think of a prosthetic as a hammer,” says Craig DeMartino of the mind-shift he had to make when his right lower leg was amputated after a climbing ground-fall in 2002.

“A hammer is a tool that you use to do a specific thing. That’s what a prosthetic does – a specific thing. Pick the top thing you want from it and call it good, because it’s never going to replace what you had.”

54 year old DeMartino has a collection of legs. A walking one. And a climbing one. None of them are perfect. But he has become a master of adaptation, working with the tools at hand. 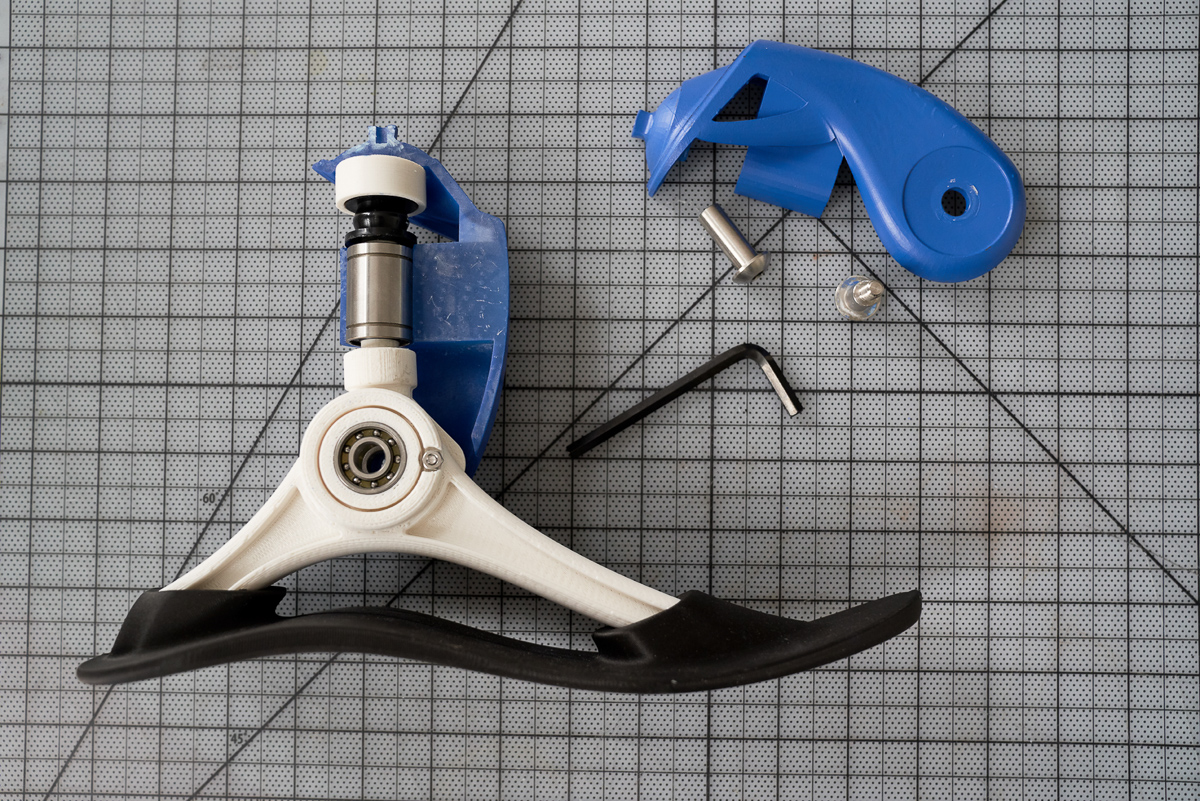 On the other side of the world as Craig DeMartino was reckoning with his new post-accident reality, a 10 year old boy was growing up, one of six million people in the small industrial city of Fuzhou, China, a manufacturing hub for Nike, Adidas, and Fila.

Kai Lin loved to draw. He’d lock himself in his bedroom and pretend he was doing his homework, sitting on a secret passion that was not seen as a viable career in an exploding industrial economy. “My family wanted me to be studious. Drawing was my way of expressing myself, without having to think about constraints or limitations. It was my way of escaping the reality.”

When his family emigrated to the United States when he was 15, the constraints fell away. Suddenly, he could be an artist – but he’d have to adapt to life as an American high-schooler in Queens, first.

“Growing up in China, I was just like everyone else,” says Lin. “Part of the majority. I didn’t think too much about other people. When we moved to the States, I was exposed to so many different people from so many different places. Witnessing their daily problems and struggles made me a lot more empathetic.”

Adapting to a new culture meant watching carefully, a habit that became engrained over the next 12 years. “It’s almost second nature for me to ask, ‘What is that person thinking?’ Or ‘What does that person need? How can I make it better?’” 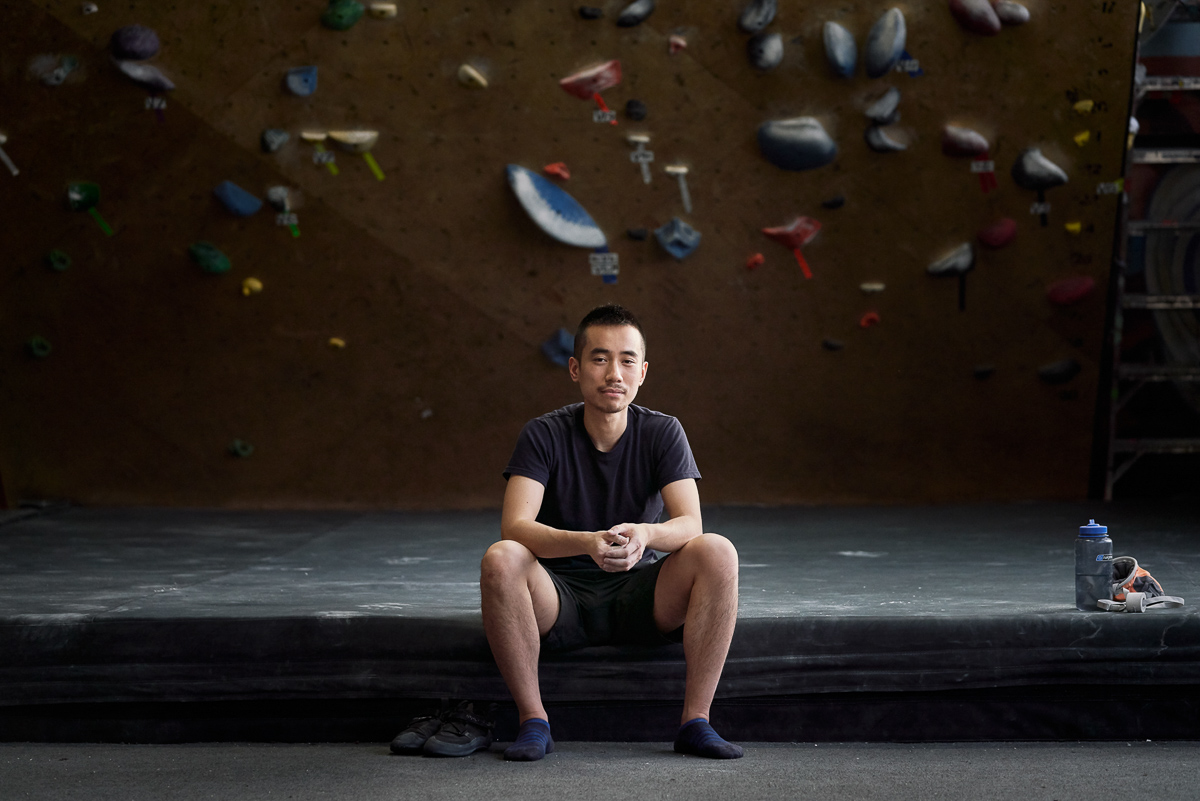 After Lin enrolled in design school at the Pratt Institute, he made a sudden pivot from a major in illustration, to focus on industrial design. Art seemed too self-indulgent. “I wanted to move beyond drawing for self-expression. I wanted to work on projects that solve a very specific real-world problem, to help people.”

One day, in his third year at school, he was browsing Youtube, when a video of mountain goats climbing a near vertical wall caught his attention.

How are they moving like that? He watched it again and again, intrigued.

“Why can’t humans have that superpower? Imagine, if you could design a limb like that?” 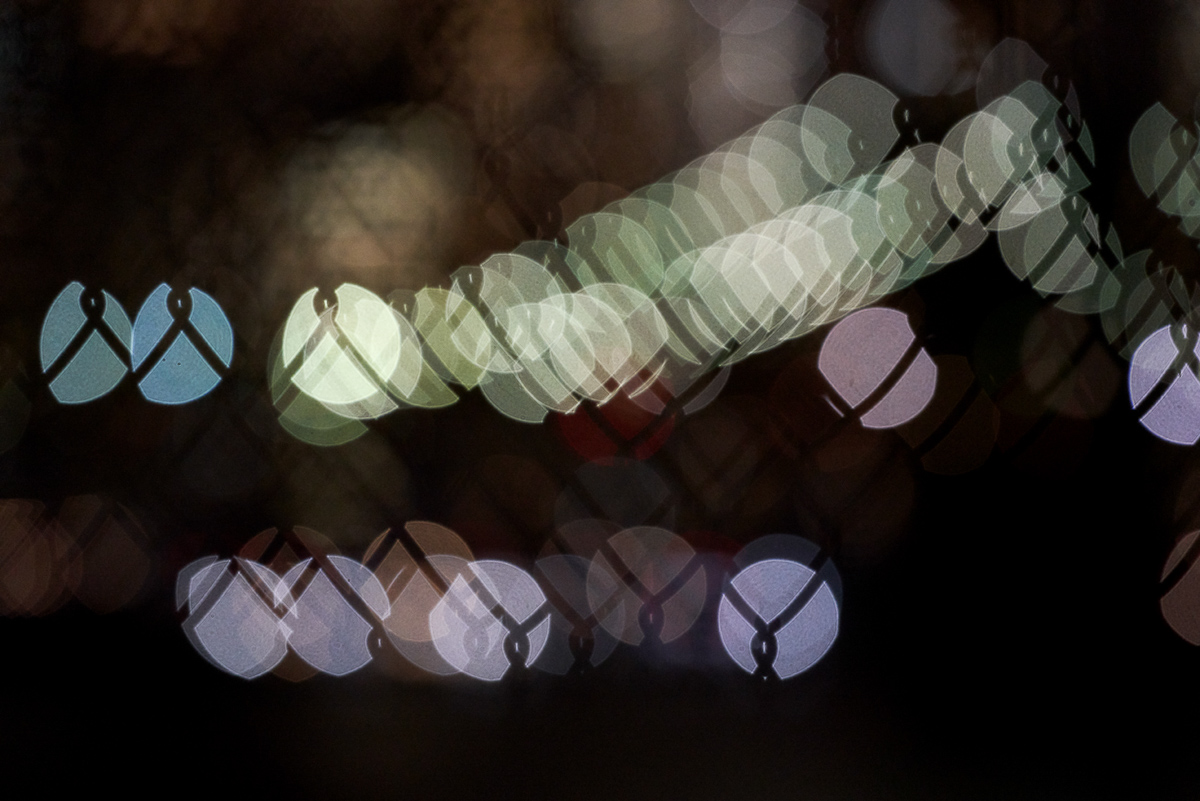 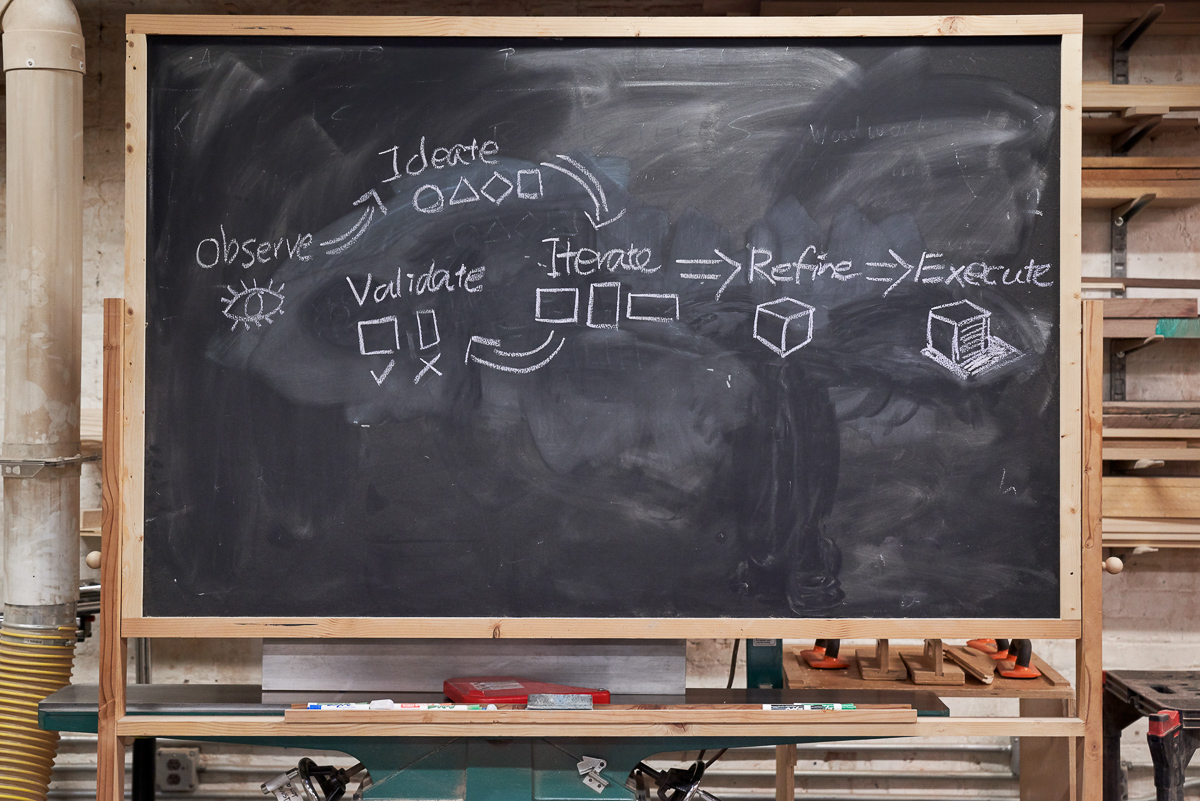 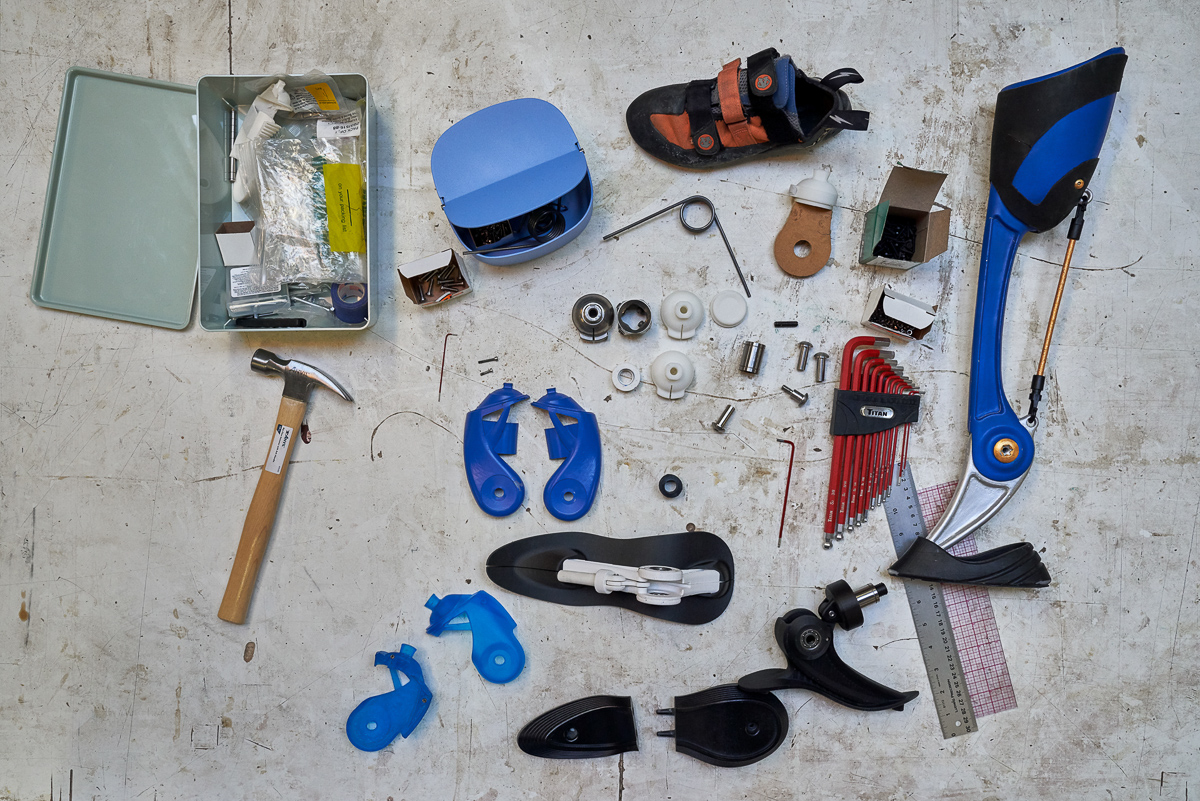 After surviving the 110 foot fall that probably should have killed him, DeMartino’s new reality looked like a fused neck and spine, a junky ankle, an overtorqued torso to the left side, and a missing right leg. He redesigned his life and his mindset, but DeMartino is not an engineer. He relies on other technical people to invent things – and no one is investing resources in improving prosthetic climbing limbs. There’s simply not enough demand.

“It used to make me really frustrated – but then you realize, what is the actual market? The foot I wear sold 52 units last year.”

Most prosthetic limbs are developed for walking, not climbing – the foot is chunky and big, a balance point optimized for walking. DeMartino has a special climbing prosthetic that he uses to climb 5.12+, but for the professional athlete, the Holy Grail that he often blue-skies with his wife is a detachable, bomb-proof climbing foot that would allow him to climb really hard thin crack again, without getting stuck. 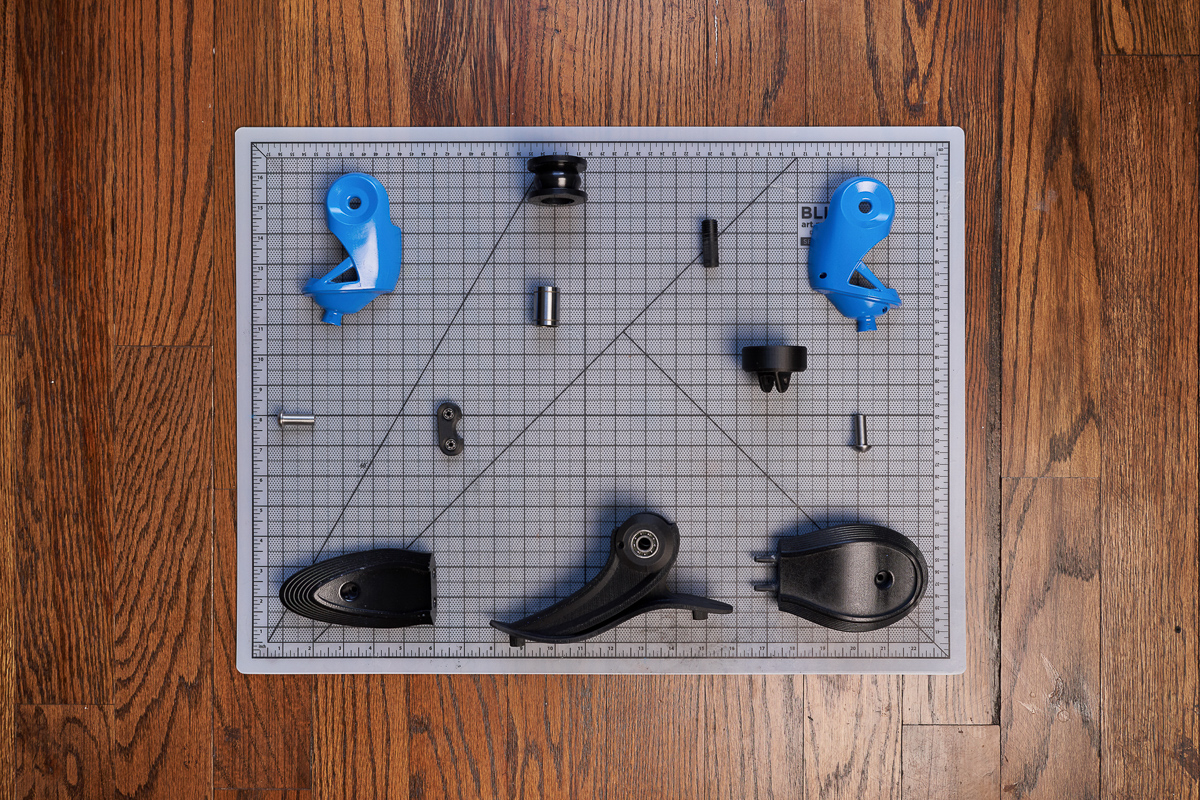 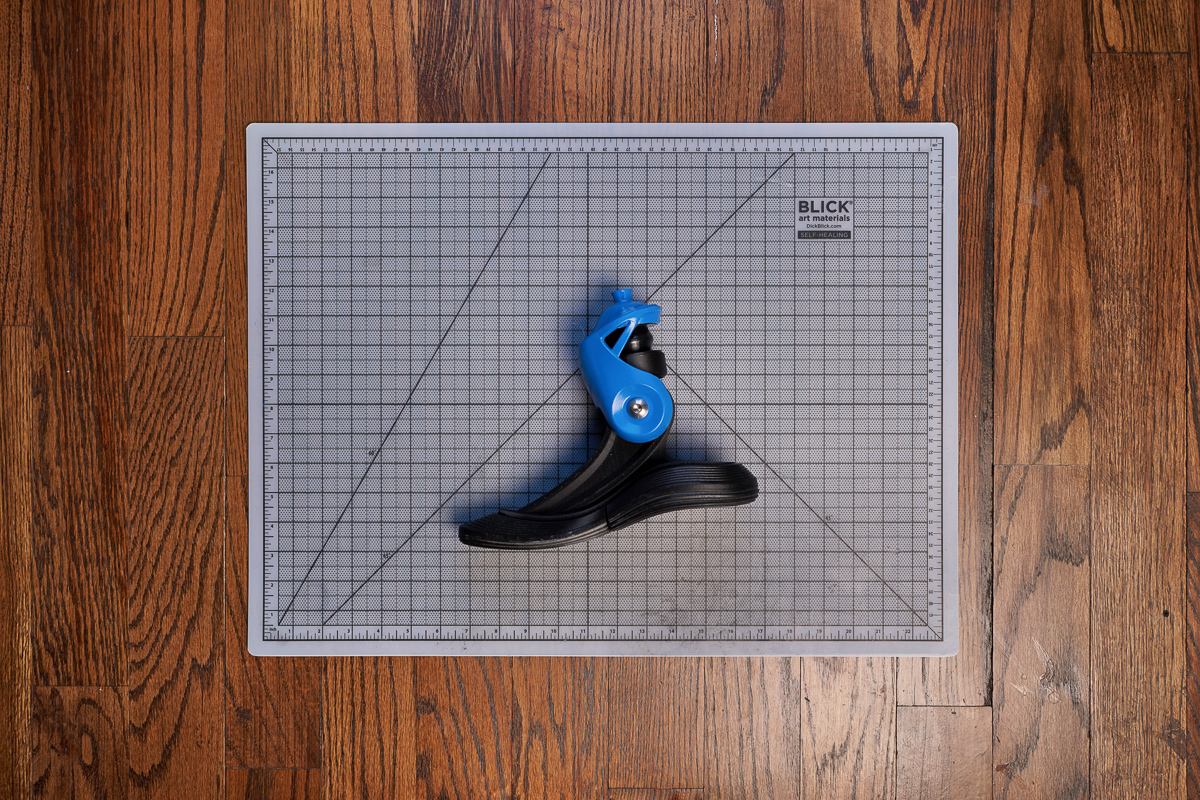 “My climbing foot does well in multiple different areas, but it looks like a child’s foot – not super fun to look at it. If you look at yourself and you think ‘I feel powerful,’ then that’s the narrative in your head and you’re creating that new pathway: ‘I am powerful.’ If you look that way and you think that way, you’re probably going to be that way. As soon as you pull off the ground, you’re thinking, ‘We’re gonna tear this up!’ When I put a prosthetic on, if I felt that people were thinking, ‘God, that’s fucking rad. I would like to have that!’ it would be so much more empowering.”

Then, you meet someone like Kai Lin, who says, “I think I could actually help you do that.”

“Just having one person say that to you is really powerful.” 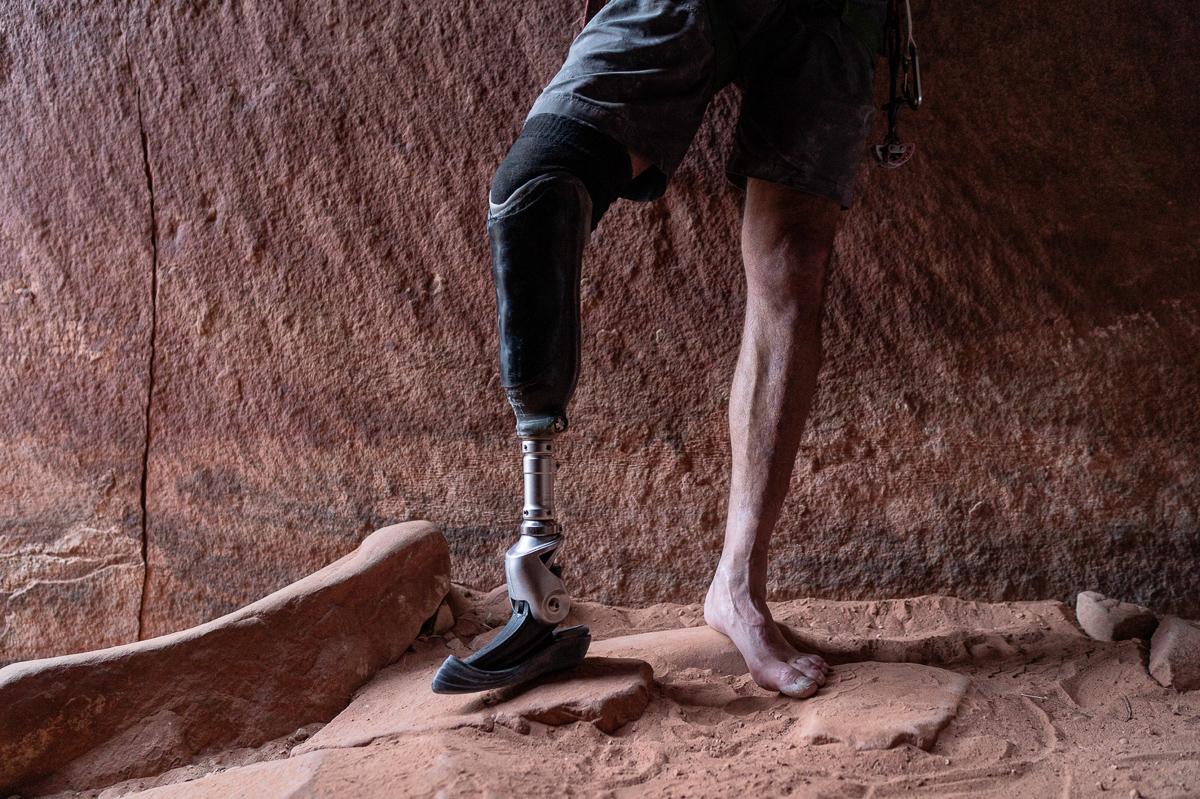 In 2014, Lin’s mountain-goat inspired prosthetic leg, KLIPPA, (Swedish for “cliff”) was a US national finalist in the James Dyson Award. The internet lapped him up – a smart young design student conceives a nature-inspired piece of uber-tech that could help US veterans climb their way through trauma and PTSD! He was introduced to DeMartino by some filmmakers, made headlines, did interviews, but the project languished. He needed money to build a functional prototype, he needed collaborators to test it, and after finishing school, he was busy working his day job as an industrial designer.

Still, the feedback he was getting from adaptive climbers, family members, and prosthetists, kept him tinkering with the design, knowing it could make a huge difference in the lives of a small group of under-served people.

Researching the prosthetic even inspired him to try climbing, stepping out of his comfort zone and onto the rock. “I think looking at this problem with a unique set of eyes allowed me to come up with a design that a professional rock climber might not have.” 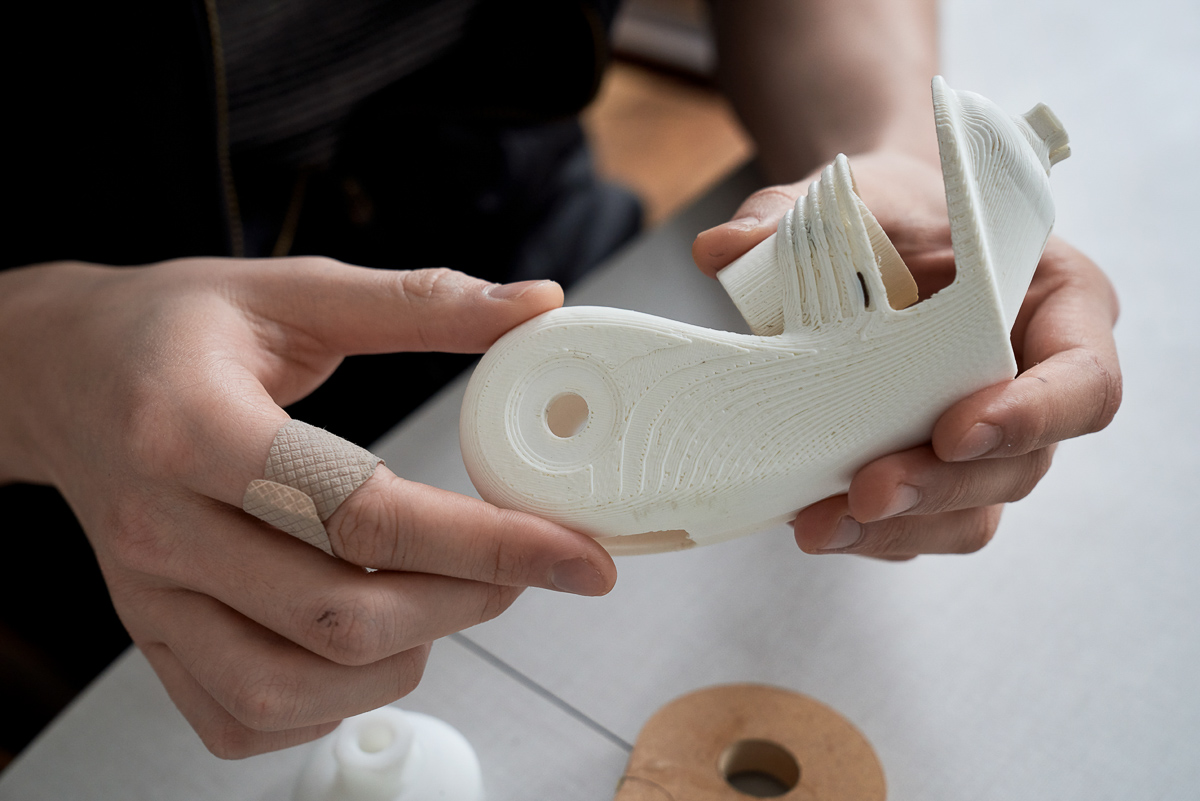 When Arc’teryx, looking for inspiring problem-solvers operating outside their silos of expertise, offered Lin the use of their 3D printer and to reconnect him with DeMartino to put the design to the test, the project was back in action.

It’s Lin’s favourite part of the design process: the moment of truth, when the hypothesis is put to the test. “Is it going to work?”

When he first designed the prosthetic, he had nightmares of people using it and falling off cliffs. The responsibility had weight.

He told DeMartino, “There might be a chance when you try out my design that it could fall off, or break.”

DeMartino reassured him: “Even if the leg’s on fire, I can handle it.” 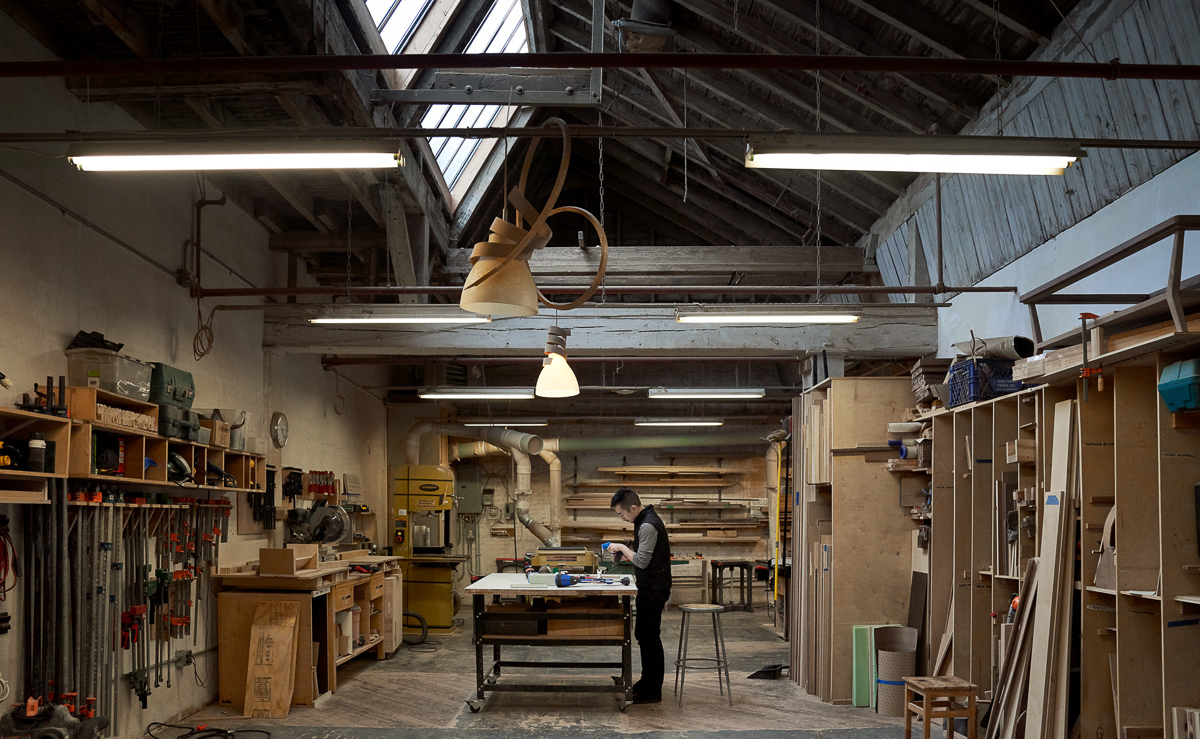 A month before DeMartino was due to fly to Indian Creek to test the prototypes of Lin’s Klippa prosthetic, DeMartino took a different prototype prosthetic to Mexico to test. “I honestly thought it was going to be awesome But it completely blew apart. It was totally shredded. It broke in so many ways I just never saw coming. It made me realize: I don’t know that much about design.”

Just to come close to the possibility of a better climbing prosthetic, a solution to his long-shelved dream of getting back on a fine finger crack, DeMartino needed a strange intervention – someone to step out of their comfort zone, to follow the crumbs of their curiosity, roll up their sleeves, and confront their fears of people peeling off cliffs plummeting to the ground because of their mistakes. 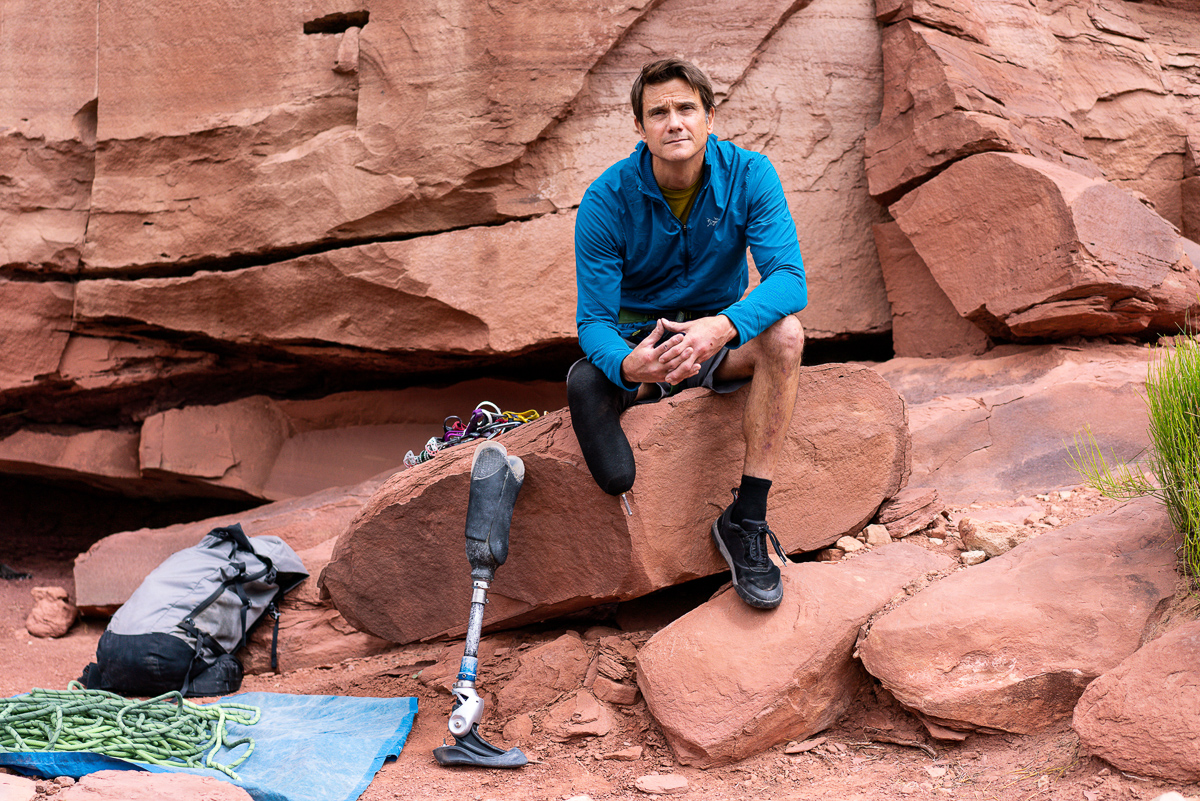 He wasn’t expecting to meet someone like Lin, but when Lin showed up, DeMartino met him there. Together, they might just change the world. Or one small square of it, for a handful of people, who’d like to climb out of their trauma or imperfections, and tap their unflappable source of power. Or they might fail, this round. But at least they’ll be failing forward. 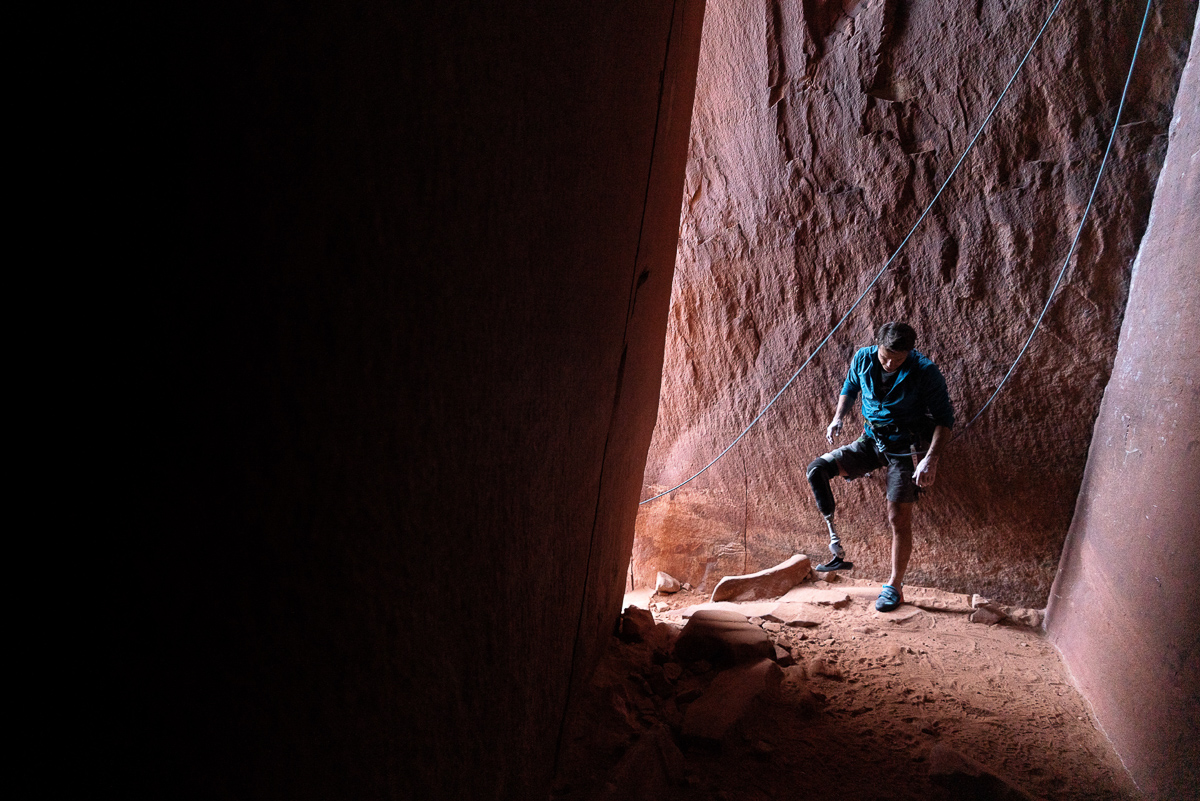 It makes Lin smile, to think back five years to when he first started this project. Connecting the dots between mountain goats, prosthetic limbs and amputee rock climbers came out of nowhere. “Little did I know that the idea would turn into years of research and development and so many opportunities. I wish I could do more volunteering in my free time. But I guess I’m helping by designing. I can design specific things that will make people’s lives better through the objects they interact with on a daily basis. That’s what I’m good at. And that’s something I can do.” 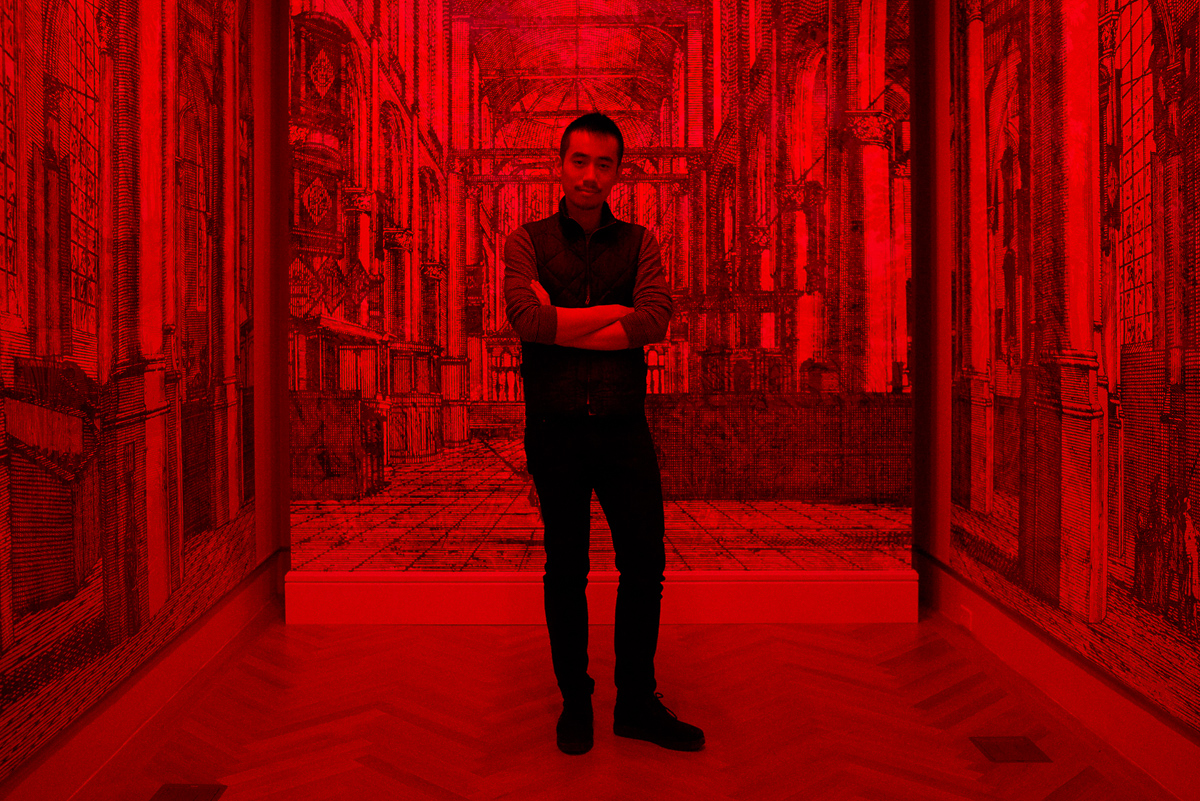 Watch the full length episode of, “Kai Lin: Out On A Limb” here!