Home For All: Ripples in All Directions
By: Lisa Richardson

A small group of Japanese architects design a host of tiny community centres, helping hundreds of people who cannot go back, move forward.

In the wake of the Great East Japan Earthquake of 2011, a small group of Japanese architects refused to let the bigness of the disaster prevent them from responding. They designed a host of tiny community centers, customized to each impacted neighborhood of displaced survivors, under a movement they called “Home for All.” They helped hundreds of people who cannot go back, to move forwards, and in the process, their own personal approach to design was radically transformed – a reminder that everything we shape, shapes us in return. It’s the type of momentum that is generated by collaboration – ripples going off in all directions. 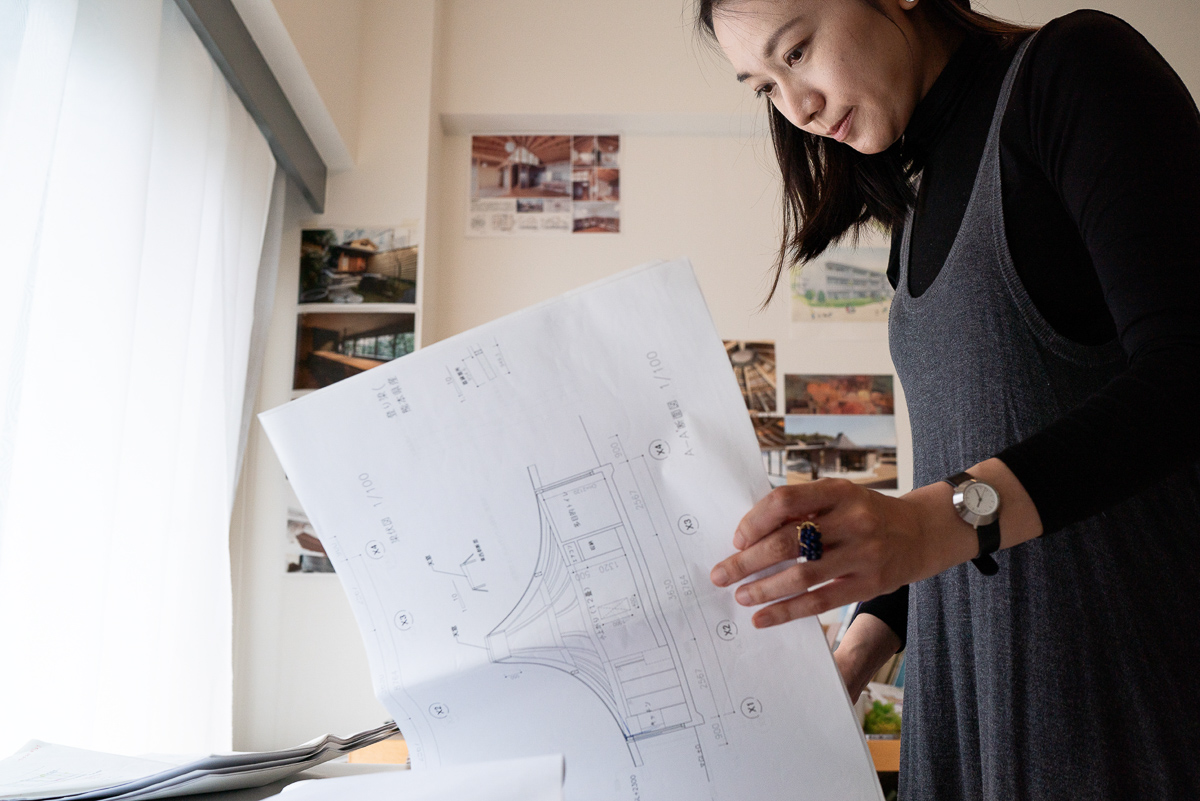 Michiko Okano had been an architect for six years, a rising star working under one of Japan’s most influential designers, Toyo Ito, when she saw buildings, her chosen creative expression, become weapons. The tsunami unleashed by the Great East Japan Earthquake of 2011 lifted buildings up, tore them apart, turned entire communities to debris. After the waters receded, survivors wandered the wreckage and found cars lodged on rooftops, trees wrapped around power poles, pieces of their bathroom tile displaced a neighbourhood over, clocks stopped forever at 3:33pm.

Shelter had become shrapnel, The devastation was utter. Terrible. 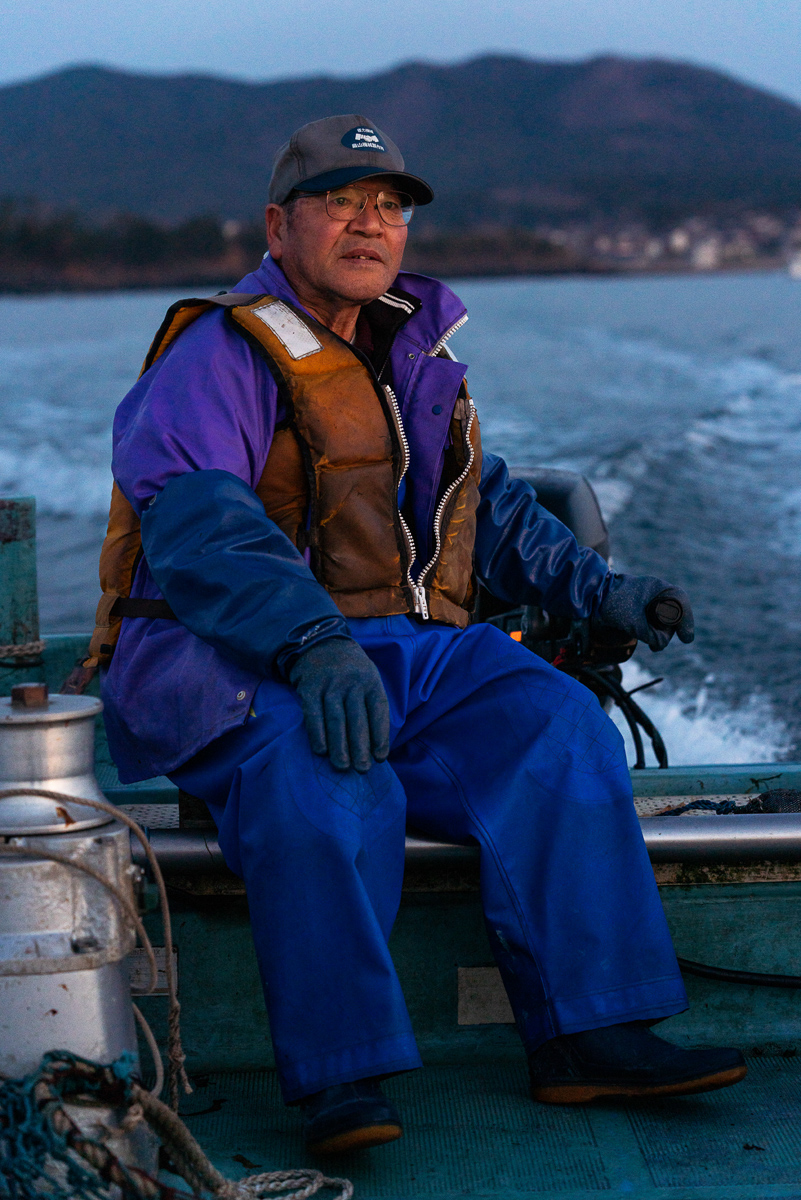 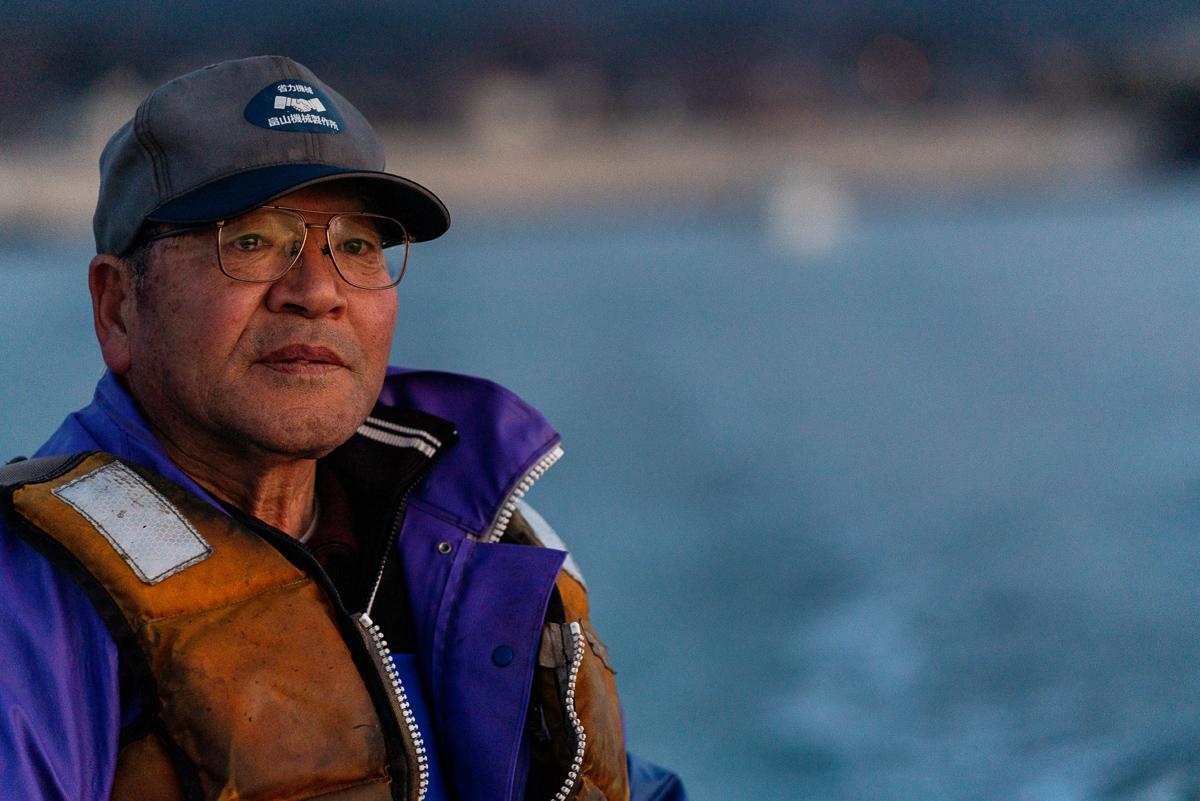 Two months after the earthquake, Okano visited the Tohoku region, the north-eastern coastal stretch of Japan’s main island that bore the brunt of what has become the costliest natural disaster in history. The devastation shook her.

There had to be something she could do.

When the earthquake struck at 2:46, on a snowy March 11, 2011, Hiroshi Shirakawa’s house shook for six full minutes. In all his 72 years, he’d never experienced anything that intense. Later, the world would discover the magnitude of the quake was 9.1. It had moved Japan’s main island, Honshu, 2.4 metres to the east, shifted the earth on its axis by as much as 25 centimetres, and generated seismic waves that broke Antarctic ice-shelves away and infrared soundwaves that were detected in space. It was more than big: the size of the earthquake was literally off the charts – exceeding the measurement limit of Japan’s teleseisometers, meaning many emergency notifications sent by Japan’s automatic tsunami warning system were delayed, or inaccurate. 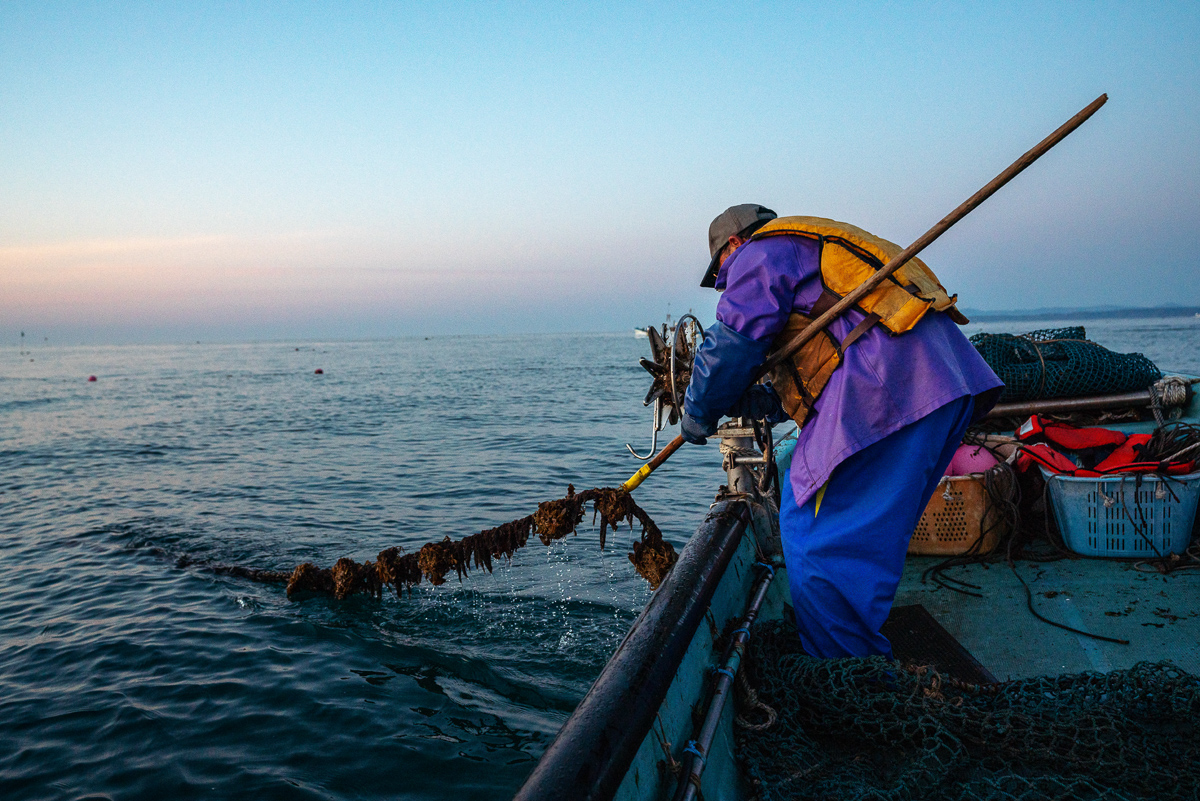 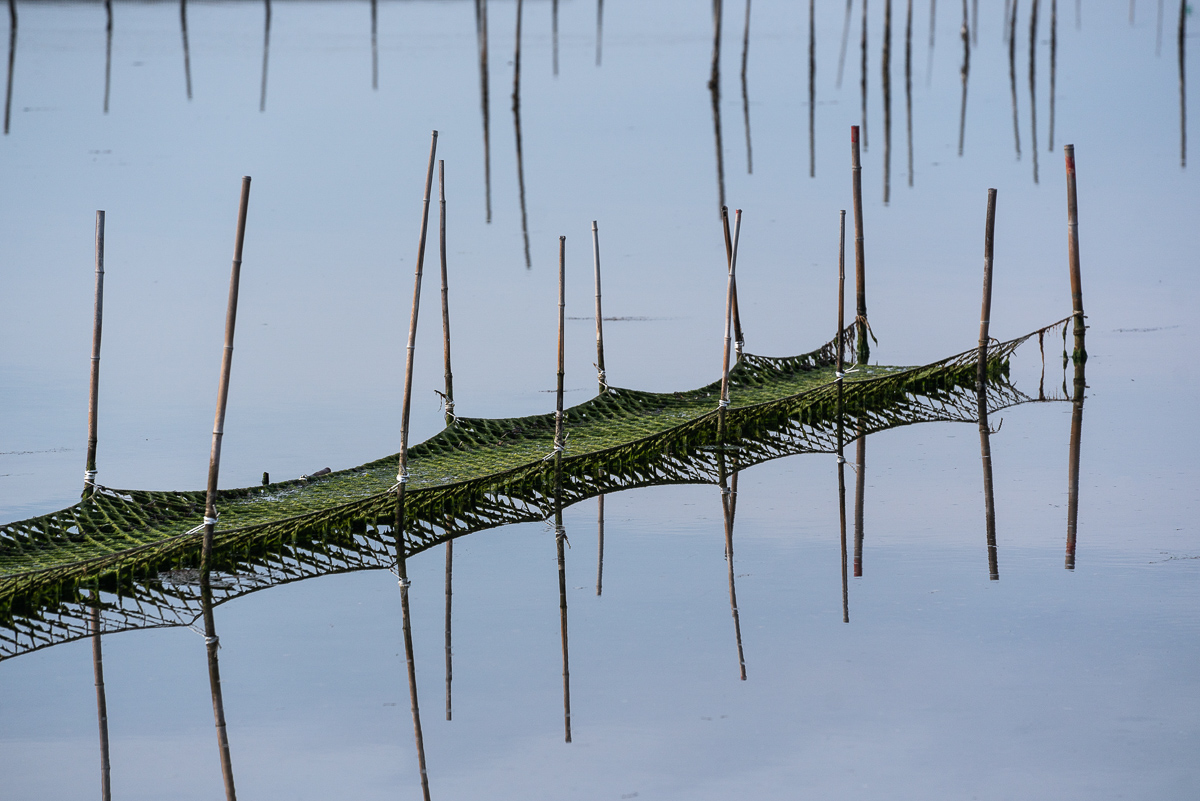 On the hill above Oya is a peculiar pink and concrete building, the Rias Ark Museum of Art. The building was damaged in the earthquake, but its location on the hill meant the staff was safe from the tsunami that followed the 30 minutes of aftershocks. At around 3:25pm, the tsunami started breaking. Five minutes later, the biggest wave invaded the town. From the roof of the ark, staff watched the waves surge in. Plumes of white smoke and dust from collapsed houses rose above the town. The Ark staff vowed to be witnesses and right there committed to a response of documenting the disaster. For the next two years, they would take 30,000 pictures and collect 250 artefacts.

Wrote one researcher of the ensuing months, “The town slowly started functioning. However, it does not mean it is recovered. The people and the town – everything in the disaster area – got little more than ‘first-aid treatments’ and had no choice but to move forward. However, there is a long road ahead.” 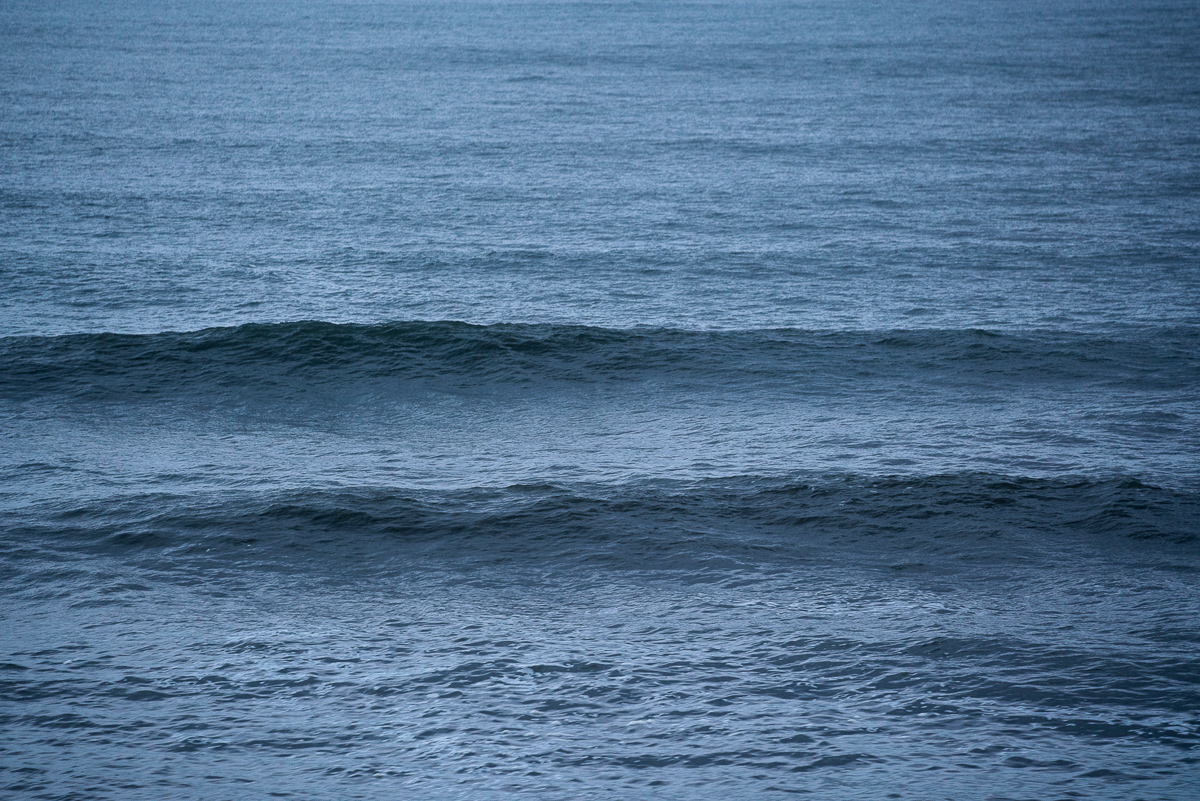 It’s surreal to drive through these rebuilt communities 8 years later with the juxtaposed before and after pictures in your mind. There have been many design responses to the Great East Japan earthquake – earthquake-reinforced buildings, new evacuation routes, better emergency notification alerts, failed robots attempting to manage the breached nuclear reactor, memorial sites, miles of plantations of black pine seedlings to create a forest interface between the ocean and the rebuilt towns, Homes for All, giant concrete walls to keep the sea out.

Sometimes it’s hard to breath in the face of the magnitude of it all. 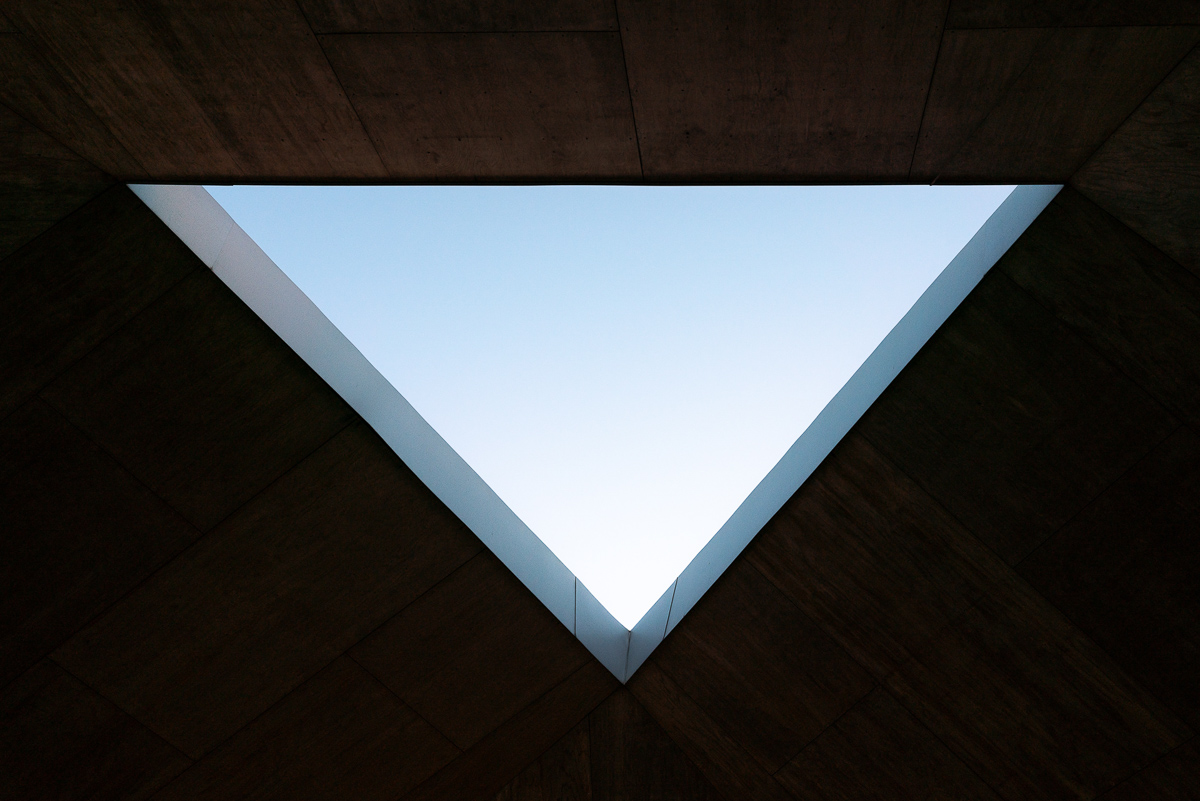 In some places, the debris has been piled into giant middens – fifteen 11 metre high hills that double as garbage dump, memorial and future refuge, inspired by the improbable story of three survivors who desperately scrambled up a small ten metre hill behind their home as it was overrun by the tsunami. The Millennium Hope Hills was conceived as one line of defence to protect people from future disasters – a safe-ish haven and a delay tactic, planted out by hundreds of volunteers in eleven types of trees that, in twenty years, as a mature forest, could mitigate the full force of a tsunami. The goal is not to hold back nature but to acknowledge it – and give people a little more time to evacuate.

Mr. Shirakawa lost everything that day – his home, family treasures, photographs, a niece, community. He piggybacked an old grandmother to higher ground alongside the rest of his family. After the quake ended, the water from the harbour disappeared. It retreated, eerily, out past the concrete levee that sheltered the community’s narrow boats, out past the seaweed harvesting grounds. Out beyond view, the tsunami was gathering force, sucking the ocean into its maw, scraping even the seabed up, turning the huge wave that would surge back minutes later completely black. 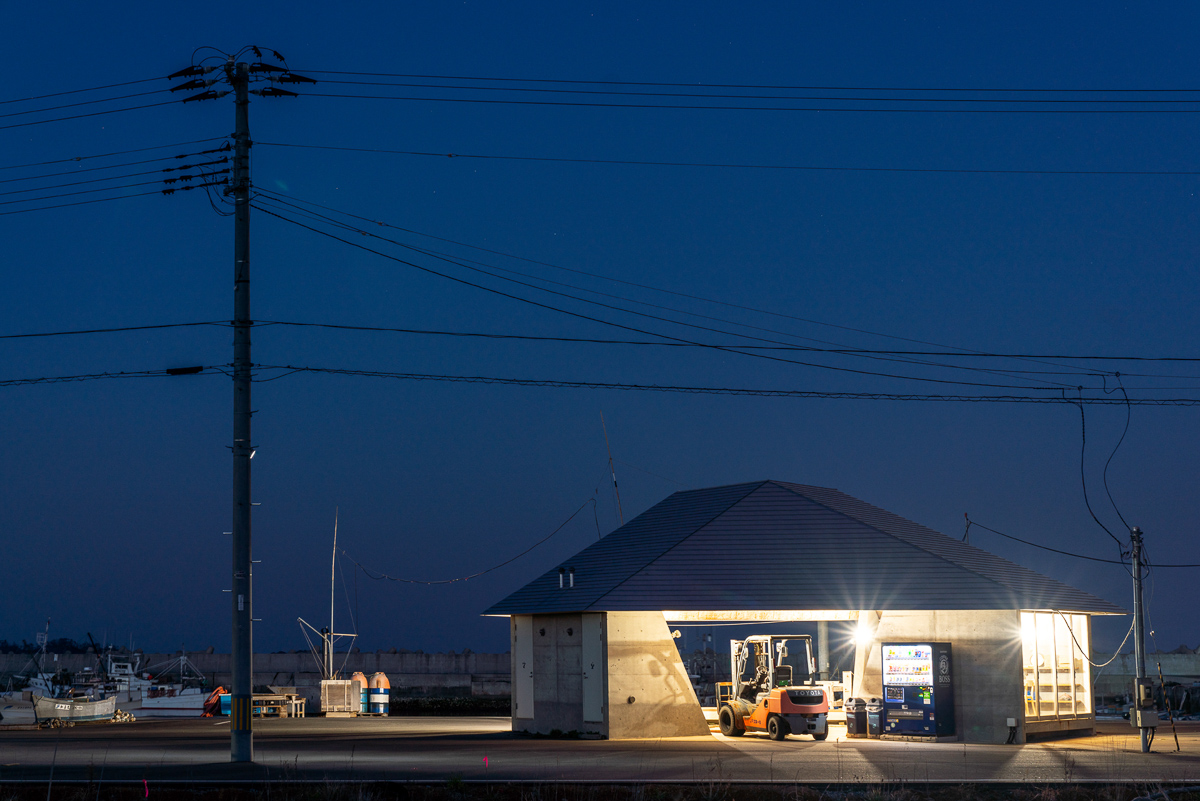 Going back for the dog, Shirakawa said, killed many of his neighbours. No one who saw the actual wave come in, survived. The line between living and dying that day was so fine. You fled to the highest point or you ran back to take a photo or grab the dog or survey the scene and were never seen again. It’s the sound that sticks with him most, these years later – the noise of buildings collapsing. “Gura gura gura gura.”

The Japanese government has a readily accessible supply of emergency temporary housing – demountable containers they can quickly deploy to shelter the displaced. Survivors of the 2011 tsunami couldn’t know they were about to spend several years living in the stasis of an emergency shelter. Up and down the coast, acres of temporary houses were set up to replace the 250,000 homes that were destroyed.

Meanwhile, architect Toyo Ito had an idea. What if he rallied his tribe, the profession of architects, to design a response to the tragedy? It wouldn’t solve everything – it couldn’t even touch the unfolding disaster of the Fukushima nuclear reactor – but in the emptied-out space of communities razed to the ground and washed away, there was a need, and an opportunity – to design a way for people to come together. Why not offer to design and build community gathering spaces? Home for All was born. Astrid Klein of Klein Dytham Architects worked with Ito when she first arrived in Japan thirty years ago.

Klein, now a board member with Home for All, explains that Japanese homes are typically very compact spaces. There isn’t a real tradition of entertaining at home – people tend to do their socializing in restaurants or public spaces. None of those things existed after the tsunami. There were just camps – clusters of temporary shelter – that were basic, functional, not very big. Said Klein, “That doesn’t do much on an emotional level. In a time of tragedy, people need to get together, and hug each other and talk it out and feel like they are not alone.”

That’s what Home for All was designed to be – a place for people to rebuild their spirits, after their entire lives had literally come crashing down around them. When Ito invited his staff and professional colleagues to contribute, Michiko Okano immediately put her hand up. Here was something she could do.

The work would be done pro bono, off the side of her desk, in addition to her job. She was assigned to the community of Iwanuma. 5428 homes had been damaged – 736 were completely washed away. The locals were suspicious of outsider architects coming in with fancy ideas, but Okano persisted, surveying them, meeting with them, asking what kinds of materials they’d want to use to rebuild. She volunteered her weekends to plant rice with them. 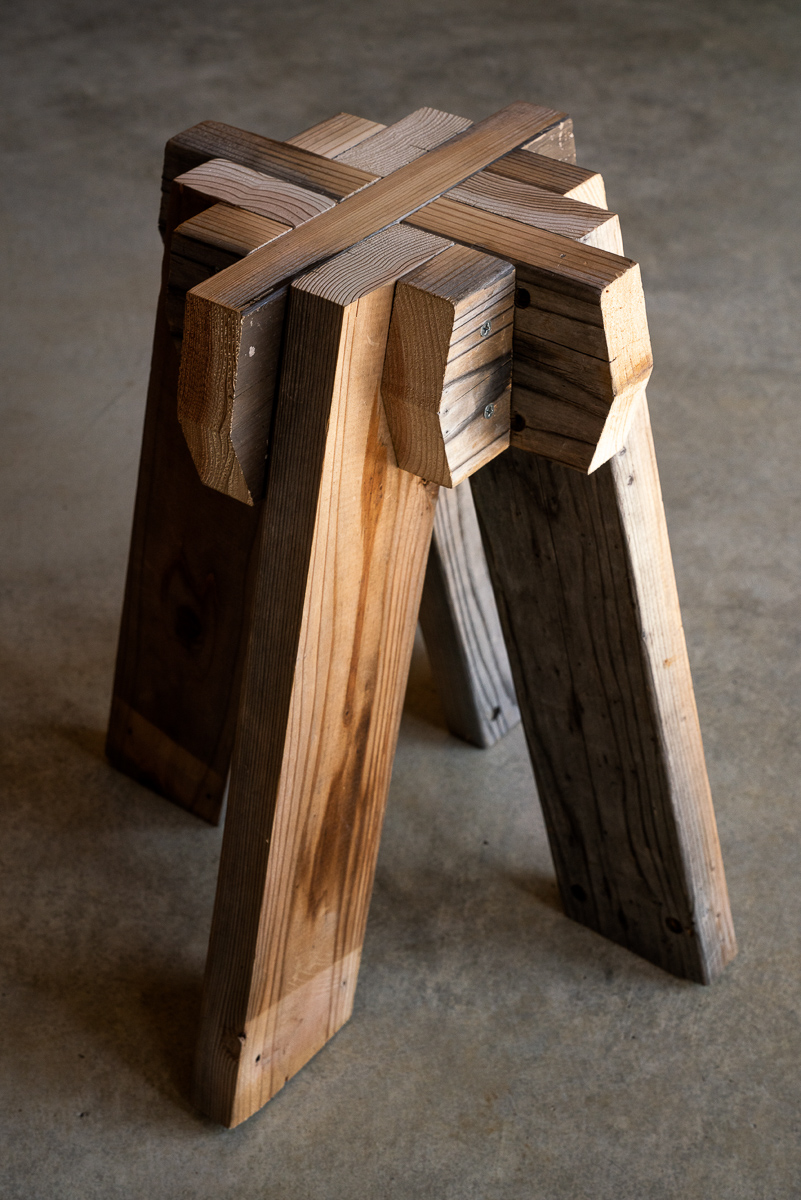 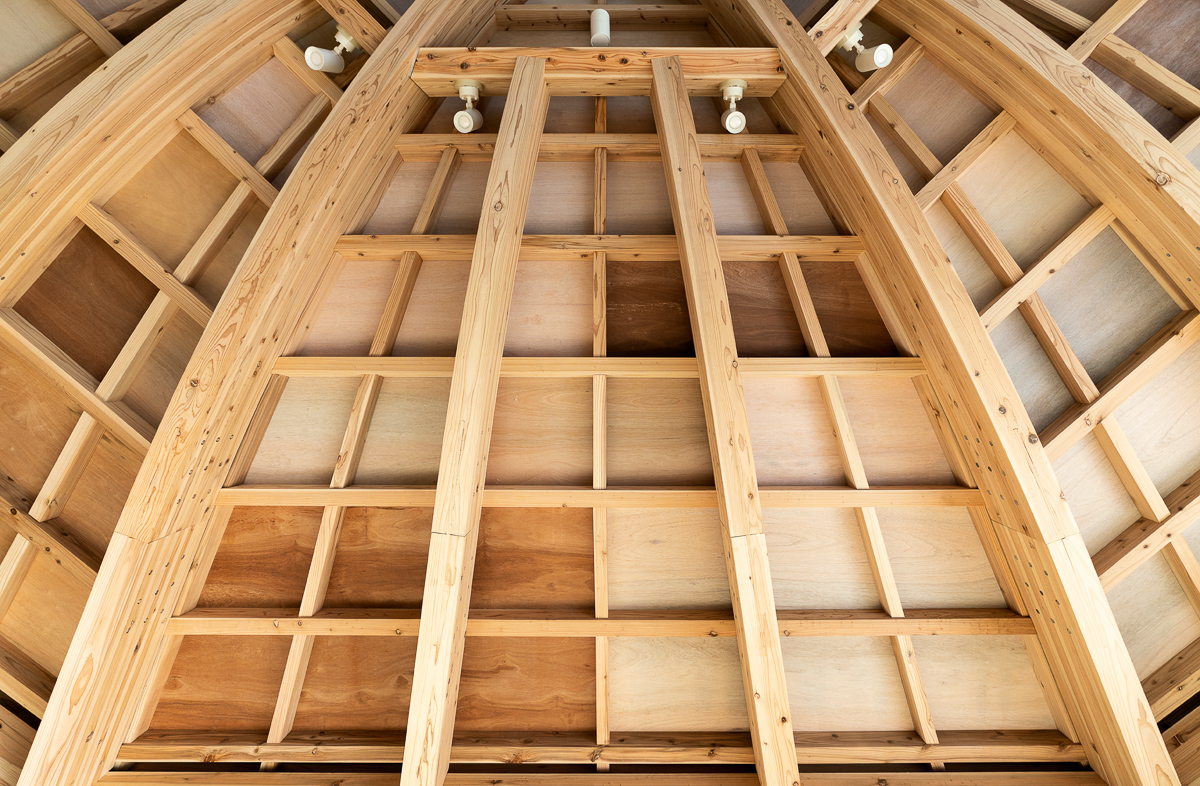 Local farmers wanted a space to sell their vegetables. She had no experience designing traditional wagoya architecture, but Okano wanted to create a space that would feel cozy, safe, a reminder of things lost – a traditional Japanese farmhouse, made with wood, natural materials and natural light. Every bit of input she collected from the locals was a piece for the foundation she was constructing in her mind – on top of which she would build a “minna-no-ie” – a Home for All.

She couldn’t have foreseen where raising her hand that day would take her. 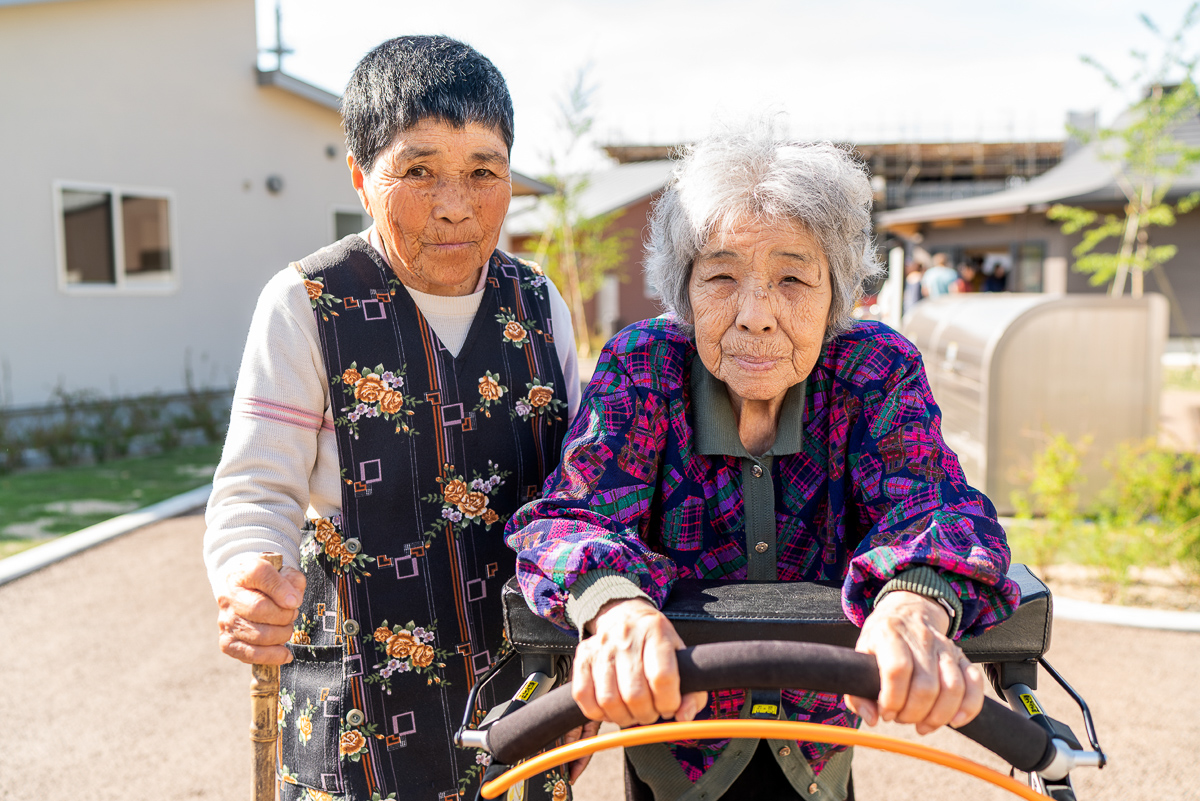 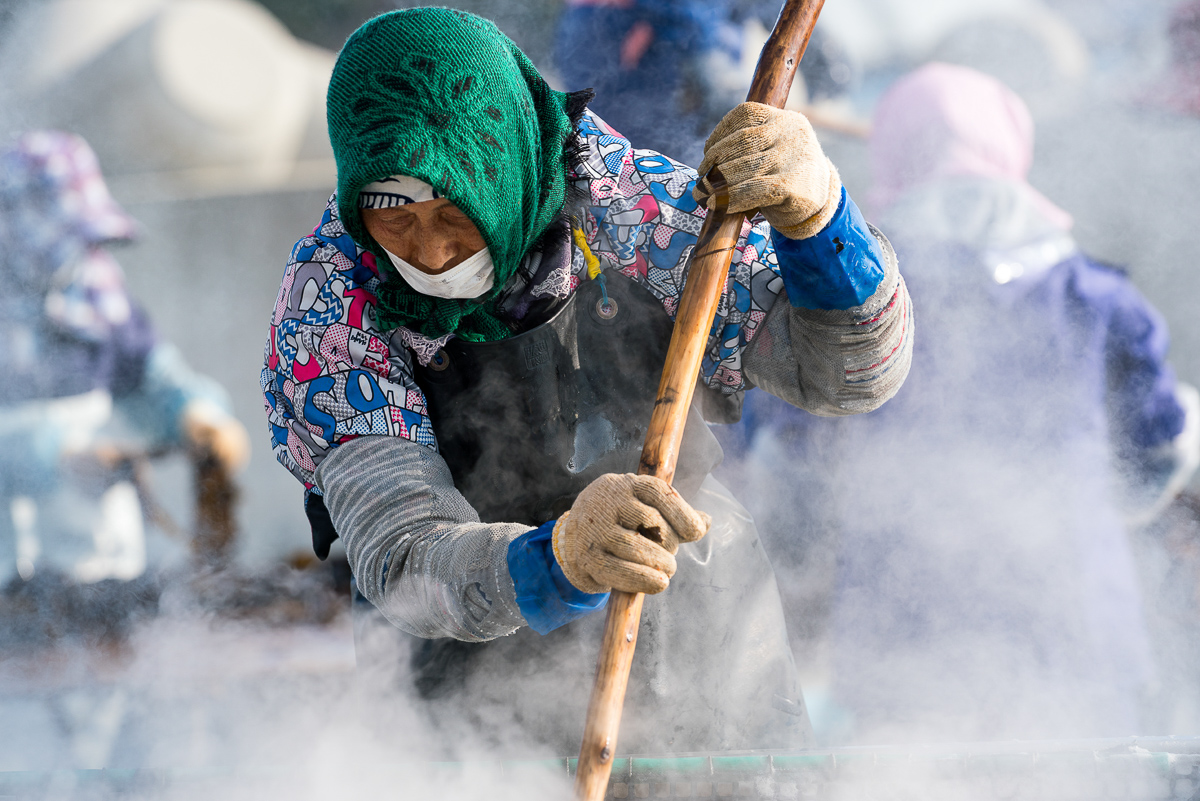 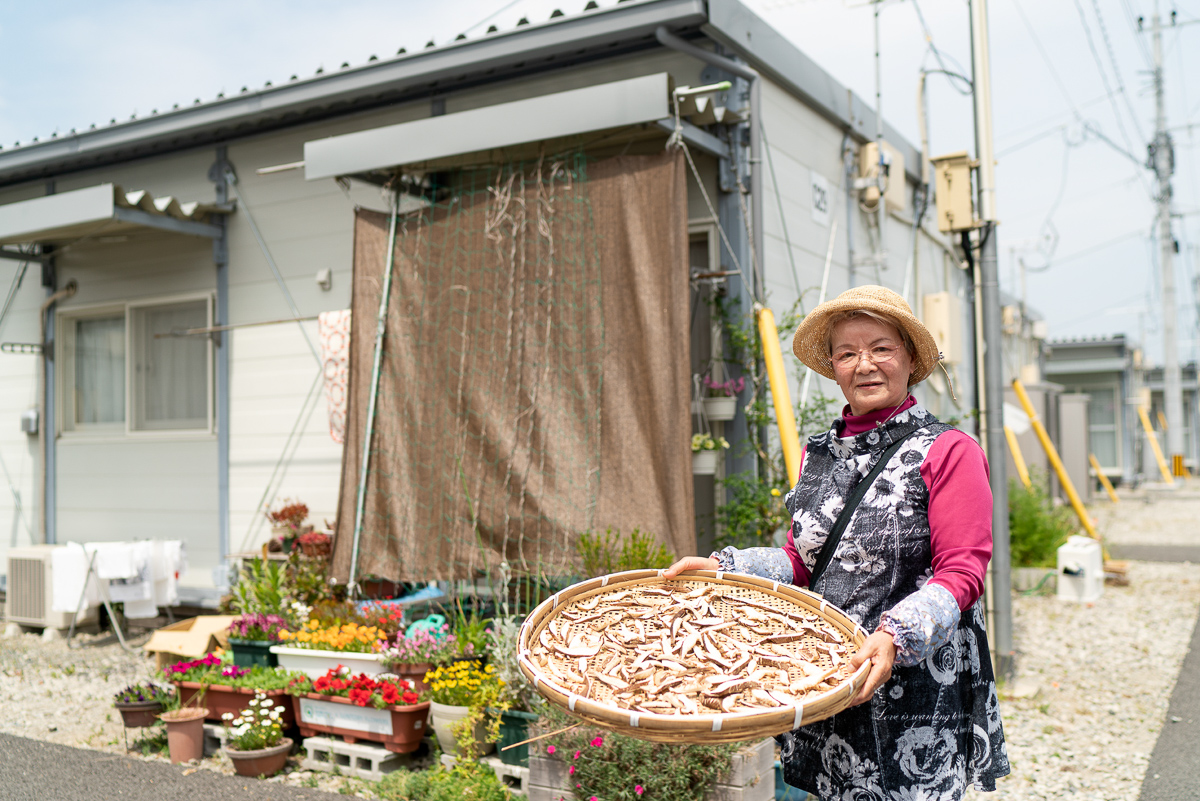 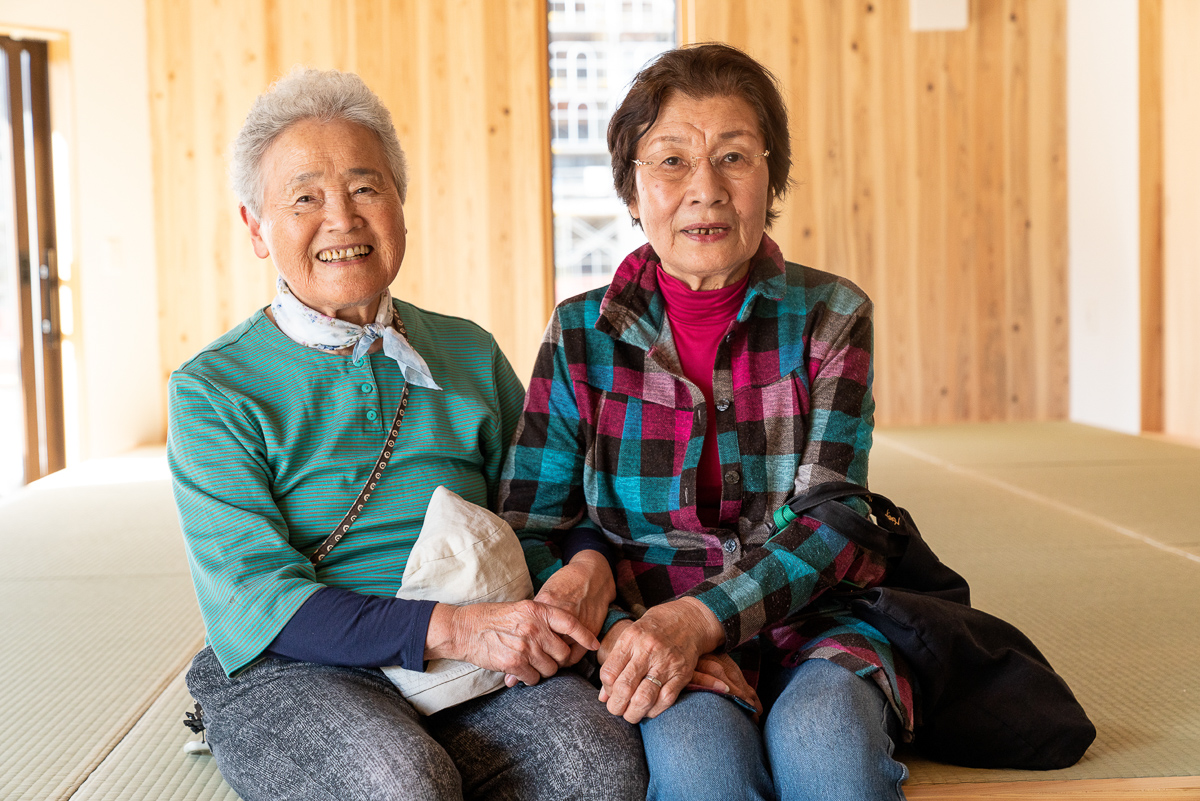 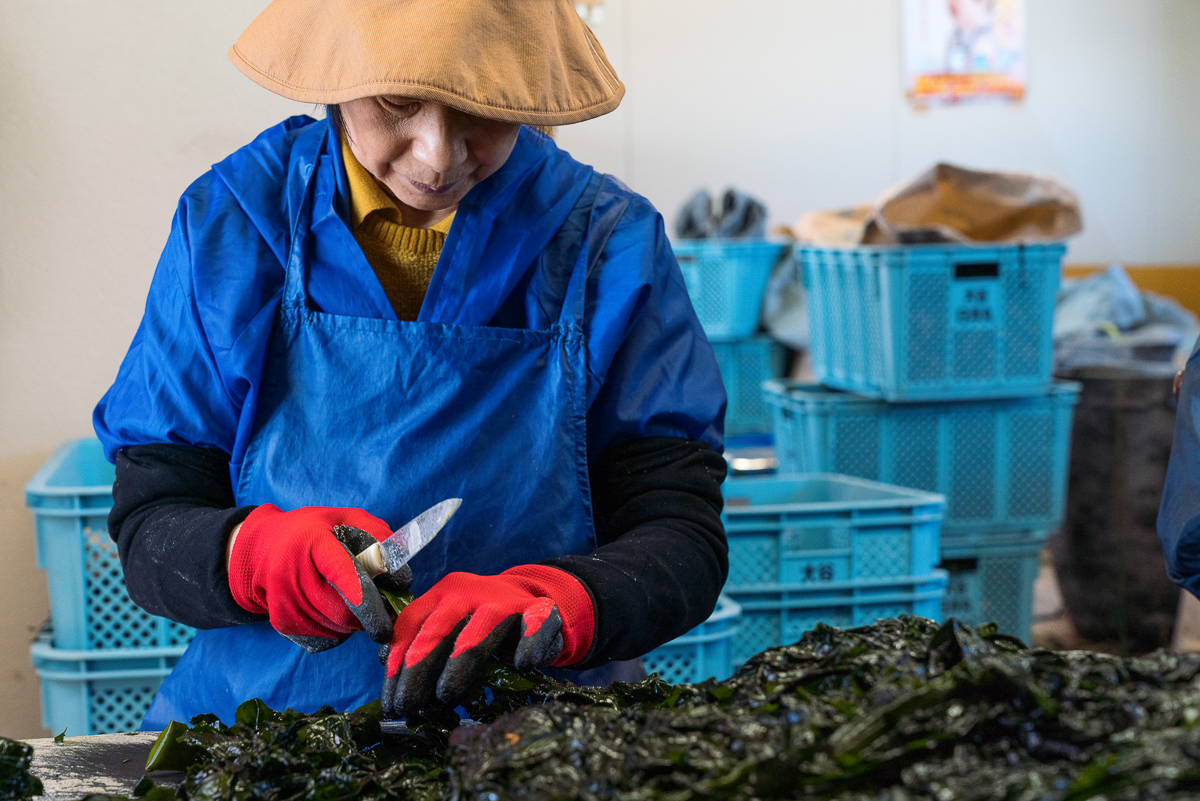 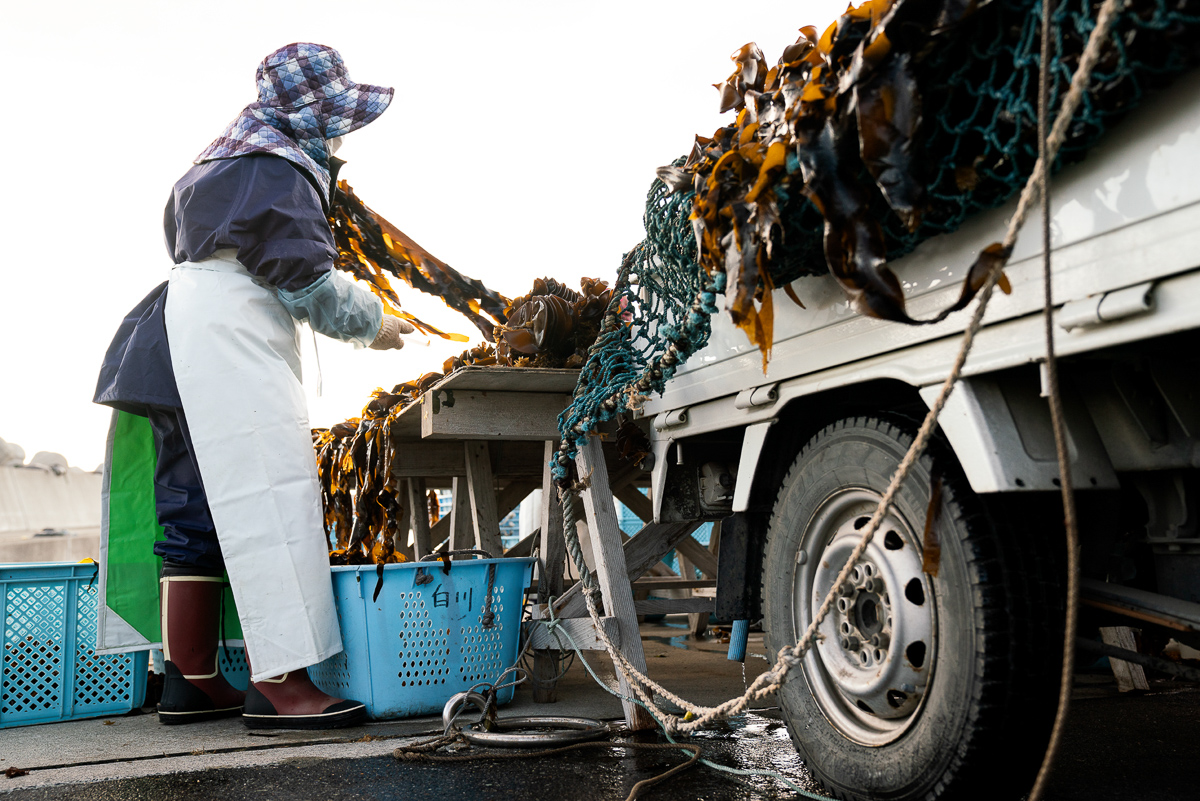 “I was shocked,” recalls Okano of witnessing the immediate aftermath of the disaster. “But I feel like I was saved by Home for All. Everyone had lost loved ones and houses and they were hurt, but there was also a kind of human strength in the survivors. I was taught that strength myself.”

Okano’s entire practice of architecture has changed since she began contributing to Home for All. “Until the tsunami, I thought architecture was something you make to give people hope. But architecture can hurt people. The debris became a weapon.” 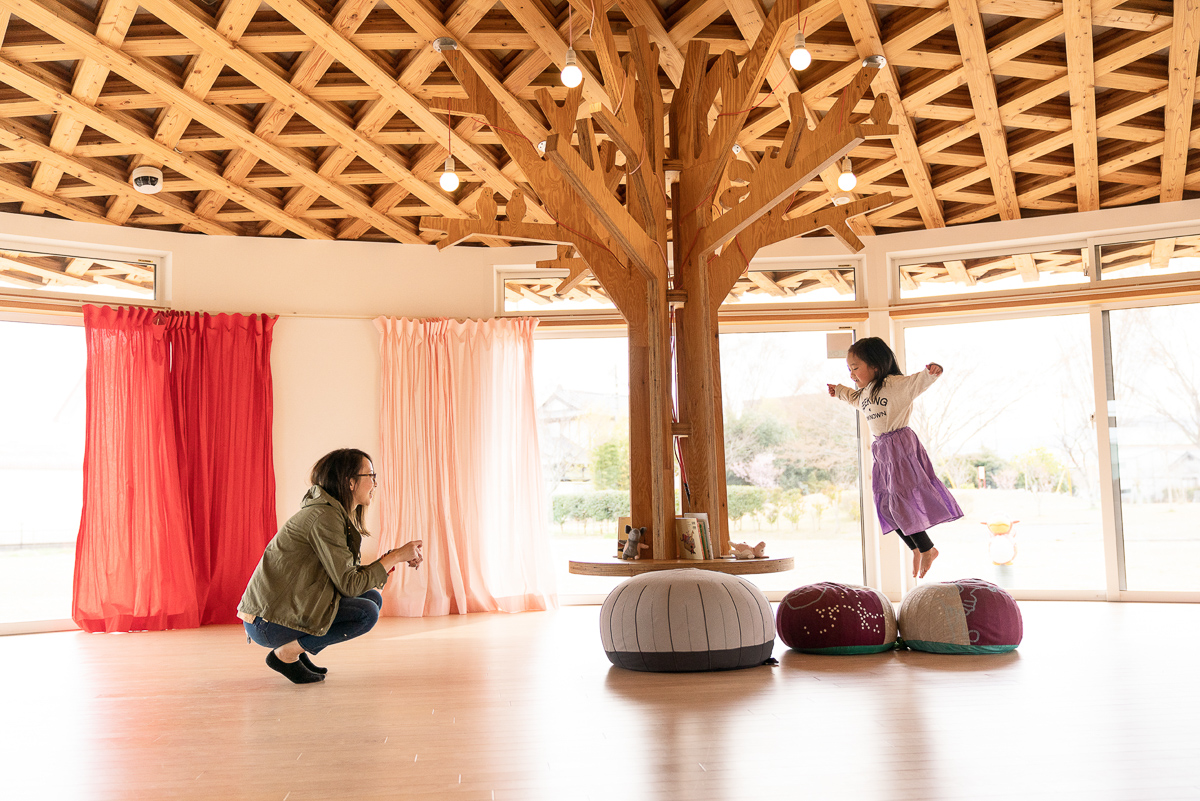 She had worked in a very contemporary style, cutting the inside off from the outside – close the window tight and turn on the air conditioner. “Now I want to try to create comfort without creating such a clear separation between inside and outside.”

As counterintuitive as it seems, walls don’t offer as much protection against disaster as a strong sense of community and an attunement with nature, does. “There’s a lot of potential in architecture to create communities. It’s architecture that can provide places for people to gather and build community on a daily basis, and ultimately, that might prove much more helpful when disaster strikes.” 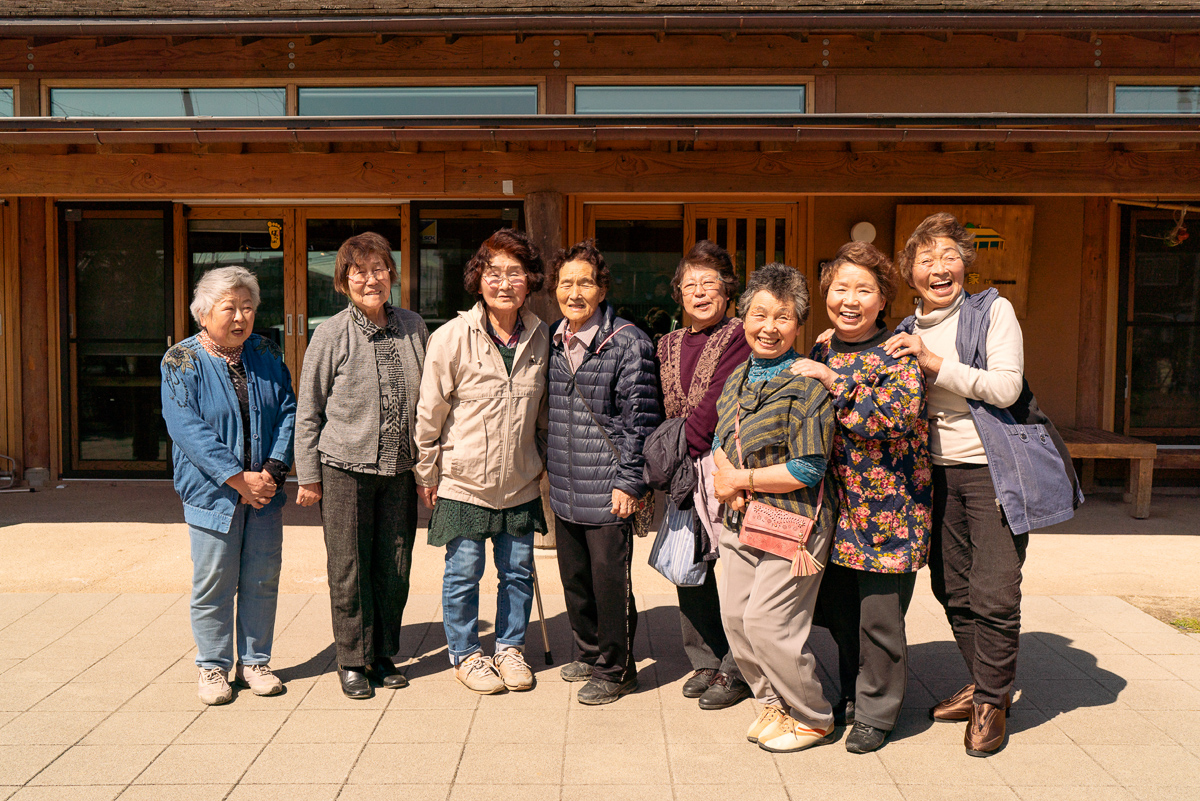 Okano and her colleagues at Home for All were reminded, as they rolled up their sleeves and designed buildings to shape the recovery of communities across Japan, that we are a part of nature. The reminder was a brutal one. But the response they designed was a welcome return to communion, with people and with the wild. 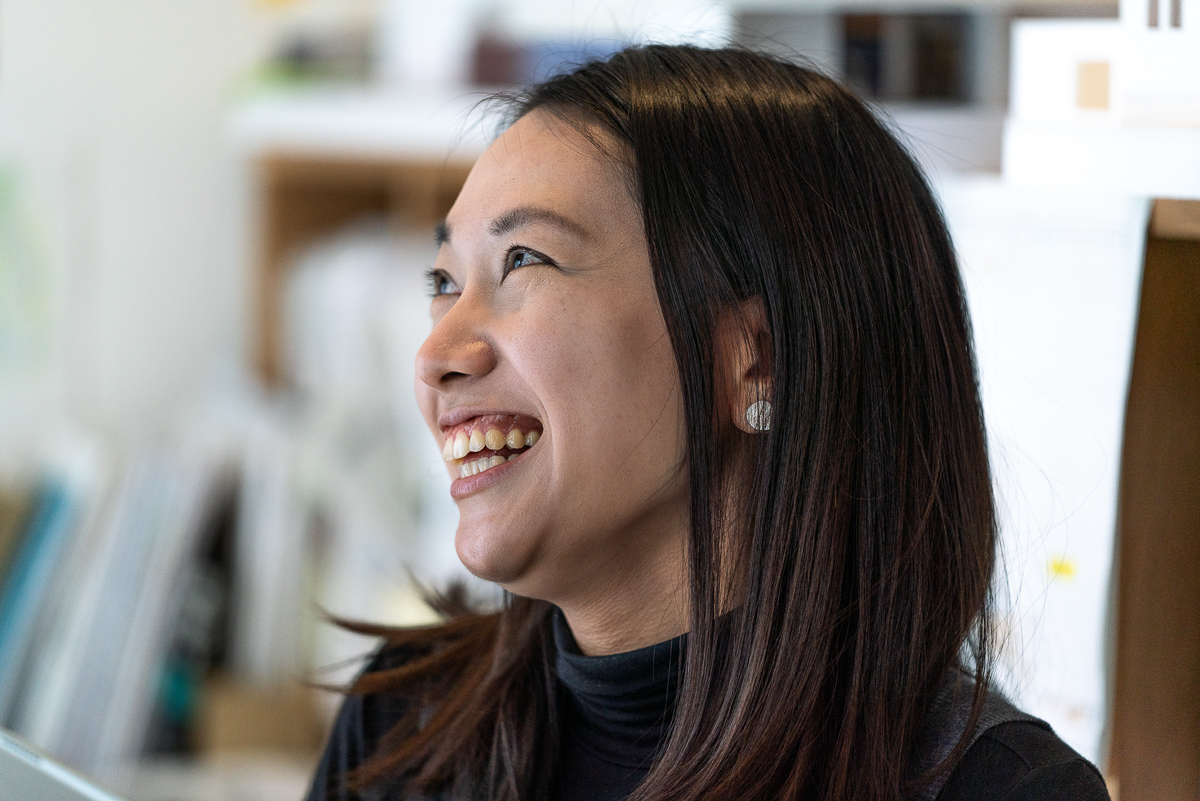 Watch the full length episode of, “Home For All: Ripples in All Directions” here!