Through most of human history, the forest, beaches and rivers – they were the foundation, timeless and essential. They were there. Nothing was more real.

That was before two-thirds of the world’s flowing fresh water had been dammed on its way to the sea.1 That was before beachfront resort development was named an “international megatrend.”2 It was before clear-cut logging razed whole forests to the ground and mountaintop removal mining removed whole mountains. It was before 83 percent of the planet was affected by a “direct human footprint.”3

We live in what many scientists now call the Anthropocene, the Human Age. Past epochs have been marked by ice age glaciers or collisions with wayward meteorites, but the extraordinary geological force of our times is us, that rascally species known as Homo sapiens. We book climate-altering transcontinental flights in the name of ecotourism, dig up whole landscapes for the rare earth elements that run our smart phones, and feed 10 percent of the world’s forage fish catch—anchovies, mackerel, smelt—to our pet cats.4 We are the makers and breakers of the world. That’s just how we roll.

Today, the landscapes where we live out our adventures may be there one day and gone the next. It is up to us, an outcome of human decisions. A mountain is a choice. A river is a choice. You get the picture.

And yet, it has become fashionable to pooh-pooh protest movements. Waving signs and shouting slogans has come to seem somehow obsolete, utterly lacking in the postmodern awareness that our beliefs at any moment are, as the intellectual French economist Thomas Piketty would say, “a social construct in perpetual evolution.” Real, feet-in-the-street engagement seems almost pre-digital in its lack of cool, as though the decision to stake your visible, flesh-and-blood self to a cause is a form of blindness to the virtual networks our minds are now adrift in. With a simple Google search we can always assure ourselves that there is another way—and another, and another—of looking at every issue. “Protest never changes anything.” Or so the story goes.

Let’s take a look, then, at a map. It’s a map of British Columbia, mountains and valleys, the Pacific coast like an unfinished jigsaw puzzle…I can’t do better than to borrow from native-son writer Terry Glavin, who calls it “this ragged place.” B.C. is one of the world’s great adventure playgrounds, attracting explorers and fun hogs and weekend warriors. I live here, too, and this week alone I have plans to mountain bike the legendary North Shore, rock climb the legendary Squamish Chief, and canoe a lake that isn’t legendary, though maybe it should be.

But back to the map. Scattered across its surface we see the green polygons that mark parks and other protected areas. Nearly 16 percent of B.C. is preserved from industrial development, more than any other Canadian province.5 If B.C.’s parks were lumped together in a single mass, they would form an area larger than such entire U.S. states as New York, Iowa, and Georgia. 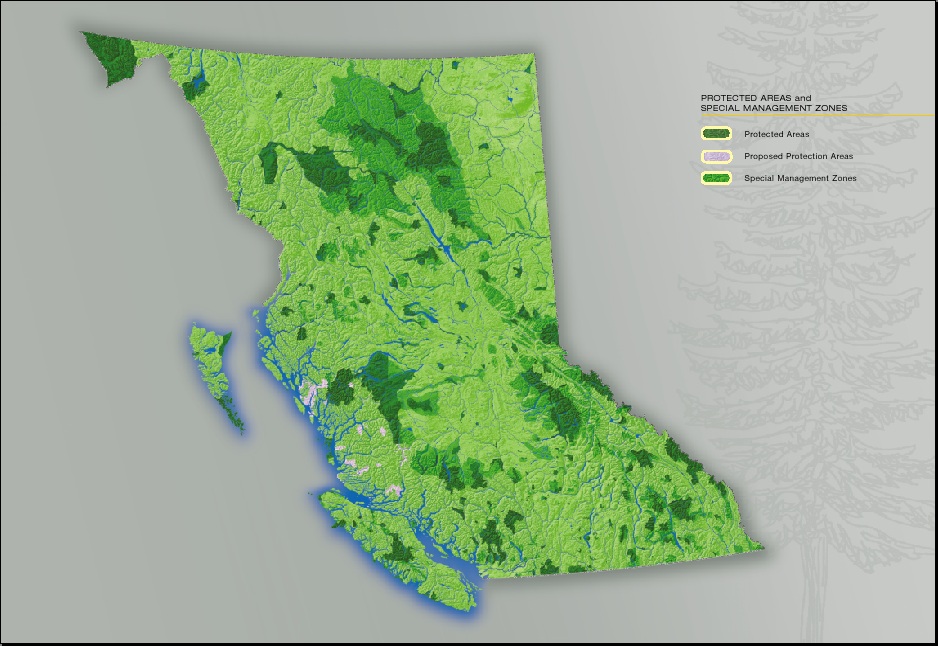 In addition to the nearly 16 percent of protected areas, land use planning has resulted in the creation of special management zones where natural, cultural and recreational values take precedence over development. About 14 per cent of the province has been designated for special management – an additional area of almost 14 million hectares (34 million acres).6

Yet in 1992, only 6.1 percent of the province was protected, a figure that had barely changed since 1960. Not even the invention of Earth Day in 1970, allegedly the birth date of modern environmentalism, managed to budge the numbers. Then, between 1993 and 2000, the amount of B.C. parkland doubled and has continued to rise ever since.

What the hell happened?

Well, for one thing, people started breaking the law.

In 1984, the First Nations7 of Clayoquot Sound, where a lush temperate rainforest meets the open Pacific Ocean, joined forces with a broader community of environmentalists to physically block logging at a place called Meares Island. A line had been drawn against the relentless clearcutting that in many parts of B.C. had reduced ancient trees to stumps for as far as the eye could see. A court injunction soon turned the protesters’ actions into an act of civil disobedience—a nonviolent form of protest in which laws deemed unjust are deliberately broken. (Think Gandhi. Think Martin Luther King and the civil rights movement.)

In the decade that followed, dozens of logging road blockades flared across British Columbia and other parts of North America.8 I won’t debate the choice of tactics here; what I will say is that when governments and powerful corporations close their ears to a groundswell of public outcry and systematically ignore legal forms of protest, then illegal actions are likely to follow.
In the summer of 1993, more than 10,000 flesh-and-blood human beings participated in a blockade in Clayoquot Sound, and nearly 1,000 were arrested.9 It was the largest act of environmental civil disobedience in Canadian history. Today, about 60 percent of Clayoquot Sound is protected, but that figure doesn’t come close to measuring the impact of the blockades. Civil disobedience dragged B.C.’s environmental policies into the global spotlight and, under tremendous pressure at home and abroad, the government set a goal to protect at least 12 percent of the landscape. Just seven years after Clayoquot, that figure had been achieved.

Civil disobedience isn’t magic. Many protests, isolated from larger campaigns of public awareness and involvement, sputtered and failed; others achieved only partial victories. But in B.C., the suggestion that protest is “pointless” or “futile” is plainly ridiculous. The map of protected areas here is nothing less than a cartography of struggle. It brings to mind lines from Al Purdy:

We can say the names of those places where people faced arrest to conserve the land and waters: Meares and Gwaii Hanas, Strathcona and Slocan, Clayoquot, Tsitika, Carmanah-Walbran, Great Bear and Elaho, Cathedral Grove. The list goes on. Today, these are sacred grounds. It is Carmanah-Walbran where people hike beneath Canada’s tallest trees; Tsitika where they paddle among killer whales; Elaho where they plunge through wild rapids; Great Bear where they gather to watch grizzlies fish for salmon.

Protest is the adventure that came before our adventures. If the word adventure strikes you as suspect in this context, listen to Candace Batycki, a conservation advocate in Nelson, B.C., who was arrested on a 1993 blockade at nearby Lasca Creek, now a protected area. “For me, the word that comes to mind is ‘exciting,’” she says, thinking back on her participation in the protests. “It’s outside of what’s normal for yourself, and you’re expanding your sense of what’s possible for yourself, and you’re by definition pushing the norms of society. You’re pushing yourself physically, mentally, emotionally, spiritually.”

But why do I bring this up now? Why this little history lesson? Because civil disobedience has its moment and fades. And then its moment comes again.
Not long ago, I watched 13 people stand on the tracks in front of a coal train to keep it from reaching a port where the coal would be shipped to Asia. The people involved weren’t idiots: they knew their actions were symbolic at best. The train would stop, and after the protesters were gone—all 13 were arrested—the coal would reach the port. It would go to Asia. It would be burned and make yet another contribution to the carbon pollution that is driving global warming.
The World Meteorological Organization recently reported that the concentration of carbon pollution in the atmosphere increased more quickly over the past year than at any time since their data set began in 1984. In May 2013, atmospheric carbon reached 400 parts per million, widely regarded as an iconic threshold of climate change—the current best estimate10 is that somewhere between 370 and 540 ppm the planet will be doomed to warm by more than 2º Celsius, with potentially devastating consequences. In April 2014, for the first time in the history of the human species, daily average carbon measurements by the Scripps Institution of Oceanography climbed above 400 ppm and stayed there for three months.
A majority of people worldwide continue to demand that urgent action be taken against global warming, including in major carbon polluting nations like the United States and Canada. For more than two decades, activists have dutifully ticked the boxes of legal protest, from marches to law suits to appeals at global summits. Meanwhile, the fossil-fuel economy becomes ever more entrenched through the expansion of pipelines and tanker ports and drill sites. Governments and corporations refuse to change at a pace in any way commensurate to a hazard that threatens to destabilize the climate at a planetary scale.
The 13-person blockade of the coal train was the first act of civil disobedience against climate change that I have witnessed, but it won’t be the last. Training camps for civil disobedience are springing up around the world, and as I write this more than 95,000 people have signed an online “pledge of resistance,”11 giving oath that they will risk arrest to oppose pipeline expansion—the line in the sand that has been drawn by climate activists in North America. Yet I remember, too, how the looky-loos on the sidelines of the coal train blockade outnumbered the protesters twenty to one. Most sneered that it was all a waste of time. “You’ll never change anything.”
And I thought to myself: a planet is a choice.