Words and photos by Chris Burkard 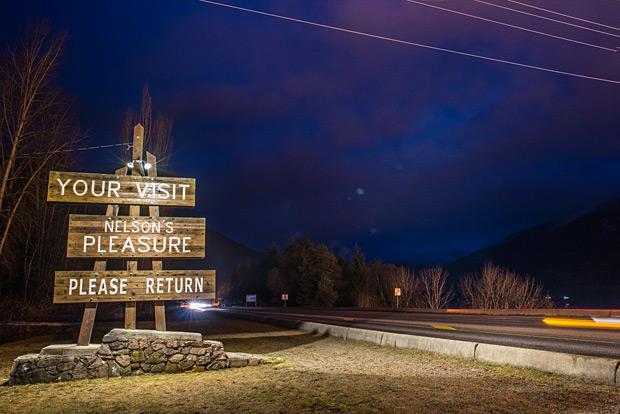 A night strolling around downtown nelson, completely stuffed from another awesome dinner with some friends who live in the area, we drove around the town taking some night scape images anywhere that we thought looked like a cool pullout
Location: Nelson, BC

Truth be told, I can count the amount of times I have skied on one hand. It’s something I have managed to keep quiet for a long time, despite being labeled as an adventure photographer. I knew there was no way to keep it under wraps much longer and that my heinous pizza slow-down was about to emerge as I spent 10 days traveling BC’s powder highway. Growing up in central California gave me ample opportunity to learn to surf at a young age. Equipment could always be borrowed or passed down from friends or siblings. Even though we wore thick wetsuits and the water hovered around the high 40’s out there, it always seemed to be a mellow sport compared to skiing. Skiing was something that never even seemed like an option for me. I equated it with five-hour drives to lackluster snow, rented gear and a lift ticket for sore legs and wrists; it seemed expensive and not my idea of a good time. But here I was, driving along one of the best stretches of skiable mountains in North America with access to any lift we wanted…I was terrified. 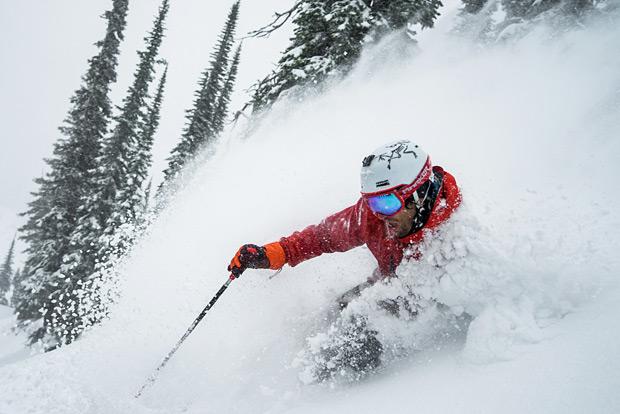 We were lucky enough to snatch a few untracked powder turns during our first morning at Fernie before the temperatures climbed and the fresh powder turned to slush.
Location: Fernie Alpine Resort 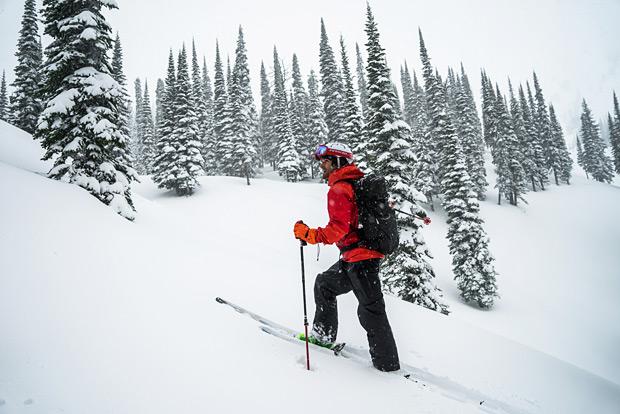 Austin Ross skinning up Currie Bowl which lucky enough for us ski patrol kept closed the whole day but gave us free reign on one of the areas
Location: Fernie Alpine Resort Even though we were all soaked, the temps were rising, and we were losing light but there was plenty of stoke to go around
Location: Fernie Alpine Resort

This February, Arc’teryx athlete Austin Ross and I spent endless hours in the car chasing rumors of powder conditions but mostly found rain in the valleys we traveled through. The base of the mountain felt almost tropical and I questioned why I had ever left California during the hottest February we have had in years…with the pumping swell and offshore conditions that make for perfect surf. But as we went up the lift, knees knocking, I started to feel something different. As we neared the top of Fernie Alpine Resort, cold air rushed across us and gave way to heavy snowfall. A couple thousand feet of elevation had made all the difference. The instant I pushed off the lift into 10” of wet pow might have been the best feeling ever. Despite the fact that this was a low to average day on the mountain at best, it might as well have been all-time to me. We glided into a steep bowl past some trees and literally floated down the mtn. A run that rivaled all but the best waves I had ever ridden, except 100 times the length. On my way down I had plenty of time to contemplate why I had spent so much time at the coast, why I despised winter storms and why the hell I hadn’t experienced this sooner in my life. 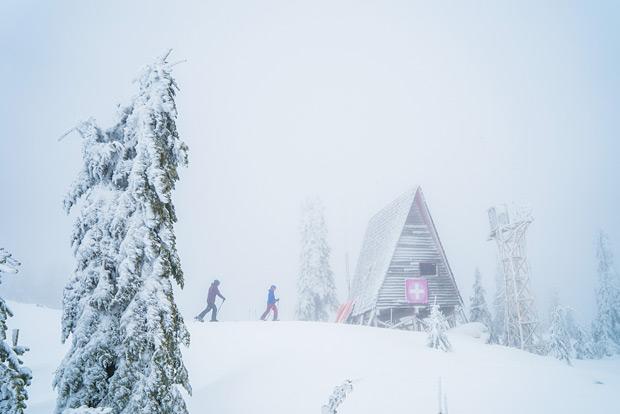 Red Resort had an abundance of old A frame cabins scattered all around the mountain, some used for ski patrol and others where people still live in. These can be a lifesaver to warm up and dry off in when the weather gets bad
Location: Red Mountain Resort 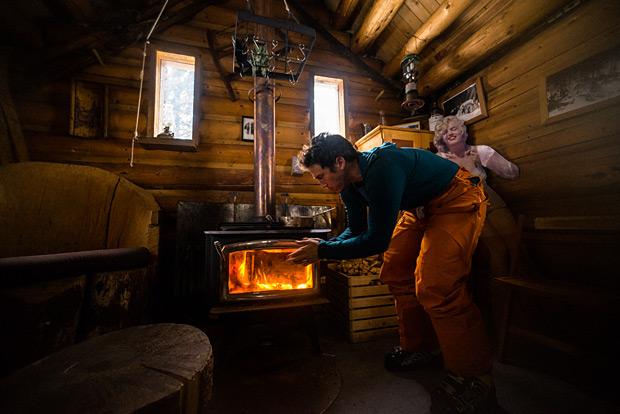 We were treated to a traditional lunch of sausages and tofu hot dogs and good company at one of the original cabins up on the mountain as we dried our wet clothes and talked about all the incredible days Red Resort has seen.
Location: Red Mountain Resort

The awkwardness was still apparent – I was pole-dragging to slow down…every time I was going too fast. Miniature mental breakdowns were taking place when I got too close to a tree or another person and the best part was (for sure) any time the skis actually came off and I tried to walk in boots. I was convinced I was always on the verge of falling over and breaking my legs. 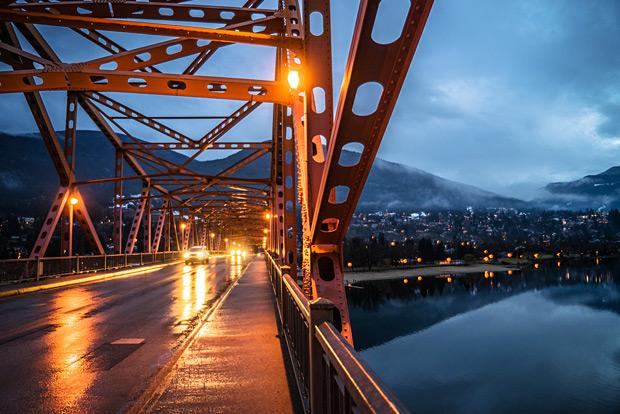 With some extra time before dinner we strolled across Big old Bridge aka BOB which gave an awesome perspective of Nelson as the fog was dancing all around us. Unfortunately a few minutes before I dropped my polarizer off the bridge into the water.
Location: Nelson, BC 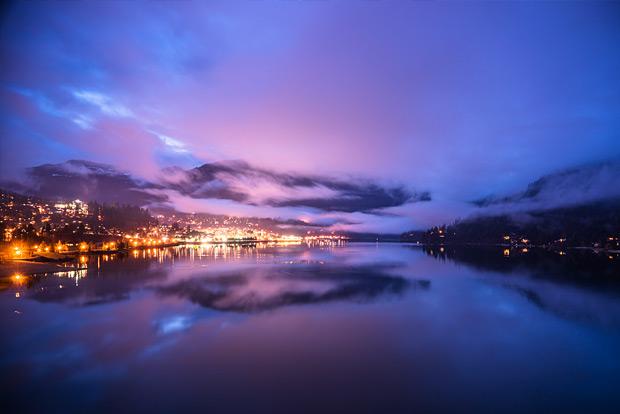 With perfectly calm water and fog rolling in and out, Nelson’s city lights lit up the clouds making for some creamy colors that were too good not the photograph.
Location: Nelson, BC 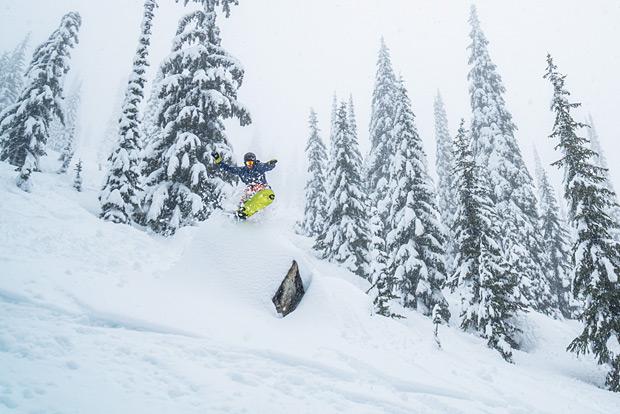 Whitewater ski hill has unlimited amounts of pillows and my assistant couldn’t help but hit a few of them on the way down even if the snow was pretty wet and heavy
Location: Whitewater Ski Resort 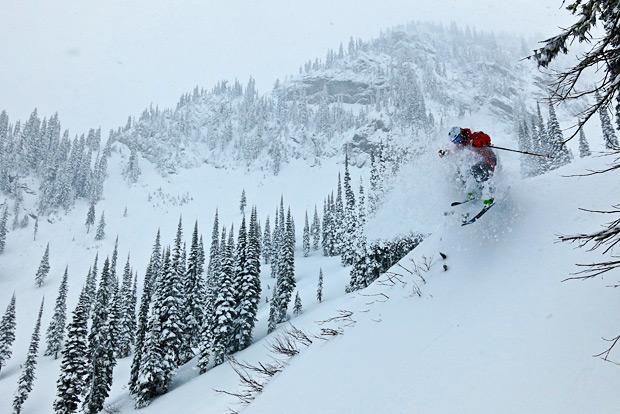 All the locals continued to tell us how all of these bushes are usually covered by December but it didn’t seem to matter to us we were all having a blast making good use of what snow there was.
Location: Fernie Alpine Resort

I wasn’t sure if it made things easier or worse watching BC native Austin rip down the mountain hucking cliffs, and slashing turns while going mach speed for my camera. A large part of me wanted to enter the same flow that he was in and in a way steal some of his grace as he made it look so effortless. I was quickly reminded against that as I face planted off a small embankment to avoid a tree. Falling was just a part of the journey and when i got up with a face full of snow, I was brought back to that childlike curiosity that had pushed me in my career to seek out some of the most remote waves in the planet in some of the harshest conditions. I had constantly surrounded myself by mountains but had always been at the bottom looking up… and In that moment I realized i had only reached the tip of the iceberg…there was so much more to experience, and all it took was a short trip outside my comfort zone. The visibility seemed to be the most difficult part of the whole trip.. my goggles were tinted for sun and what looked like good visibility at the bottom of the hill made for almost a complete white out near the top of all the peaks.
Location: Fernie Alpine Resort 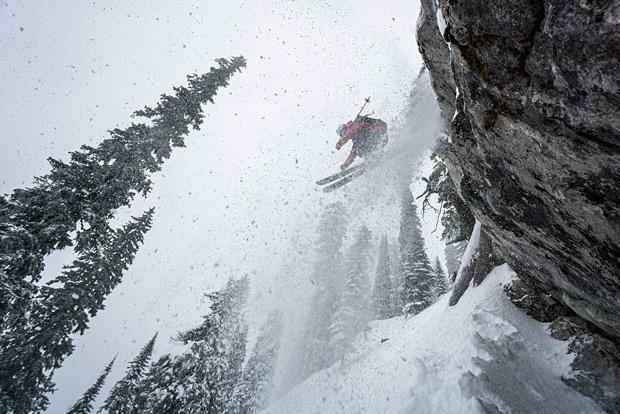 Austin Ross seemed to find airtime anywhere he could and had a bit of a laugh as he dowsed me with a ton of snow as he launched past.
Location: Fernie Alpine Resort 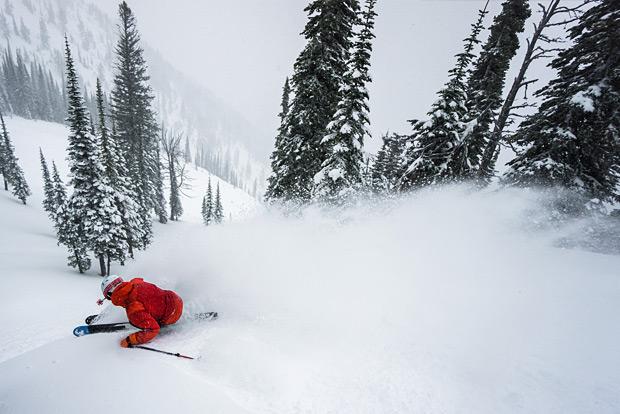 During an afternoon stroll of downtown Fernie we stumbled into Clawhammer Letterpress where I was blown away by what true craftsmen they are over there and Austin couldn’t help himself but play some tunes for us as we chatted.
Location: Fernie, BC

We will be posting images of Chris throughout the coming months. Keep an eye on @arcteryx on Instagram and on Chris’ channels to keep up to date with Chris’ travels and imagery.