The river under roaring into the abyss just a few feet below my crampons scared me more than the ice climbing above me. I know ice climbing, it’s been a passion of mine for more than 35 years, but a river of ice-cold water crashing past me and down for another few thousand feet under the Greenland Ice Cap? That’s really scary! It’s the unknown of it I think; where does the water go? What would happen if the river somehow swept me down into the darkness, a hundred kilometers away and 1,000M vertically from the barren coast of Greenland? I wanted to know the answers to these questions, but without dying. In August, the entire surface of the ice cap near us was melting. Beautiful blue lakes were feeding into beautiful, if not terrifying, rivers that meandered on the surface before going vertical down moulins, or sink holes, of epic proportions. The temperatures were often well above freezing during the day, and just keeping the tents dry in a glacial swamp was a real problem. 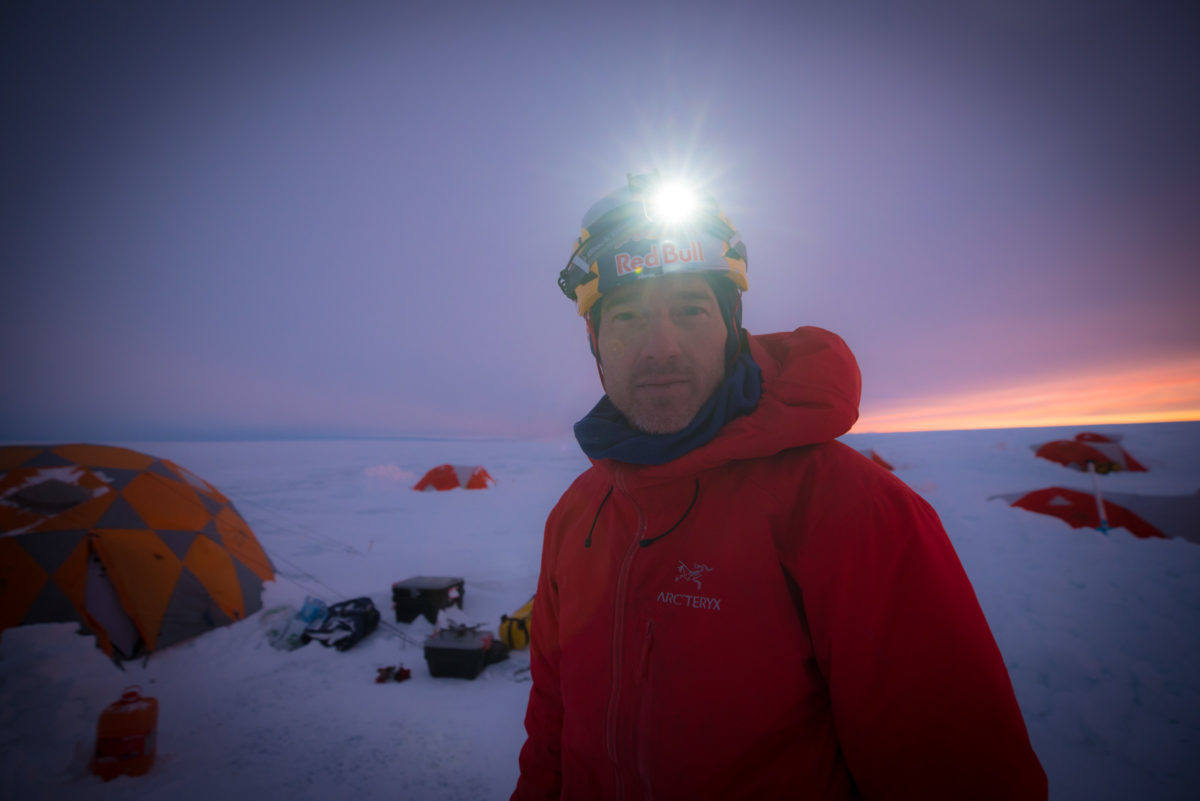 In early October glaciologist Jason Gulley and I flew back to Greenland and the ice cap was a very different place than when we first saw it. It’s nearly always windy on the Greenland ice cap so the first thing we had to do upon landing was build armaments against the drifts or our tents would soon disappear under blowing snow. The constant wind made mundane tasks like going to the bathroom a frantic battle between exposed skin and frostbite. Camp in, Jason and I headed back to the roaring moulin we’d rappelled into earlier in the year. It was dead silent, except for the occasional giant “BOOOOOM” noises as the Greenland ice cap flexed and settled into more comfortable positions. The first time I heard the noise I almost lost my lunch, but after a few of those it was just mildly terrifying. We threw chunks of ice into the giant hole, and heard massive reverberations seconds later… Game time.

My job in Greenland was to help Professor Gulley descend into the moulins and then study them to understand more about how the water actually moved through the ice cap compared to what the models suggested. This knowledge is important to understand how quickly melt water reaches the bed surface and lubricates the ice cap’s progress toward the ocean, where it has a big impact on sea level rise, how sea currents move, and the weather globally. Glacial caving is both raw science and true exploration; every trip below the surface would add to the scientific understanding of the ice cap, and also brought us into a place no one else on the planet had ever been before. There are no Google maps, no satellite imagery, just a vertical shaft leading, well, somewhere. 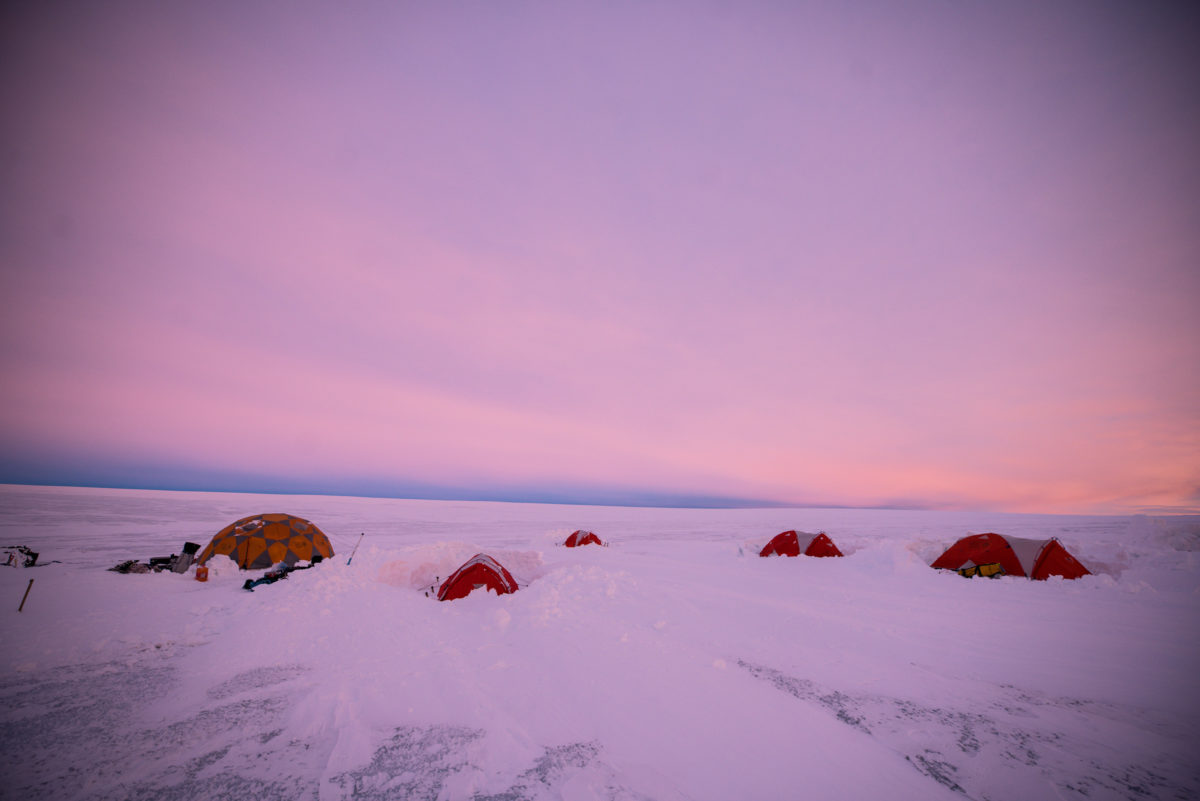 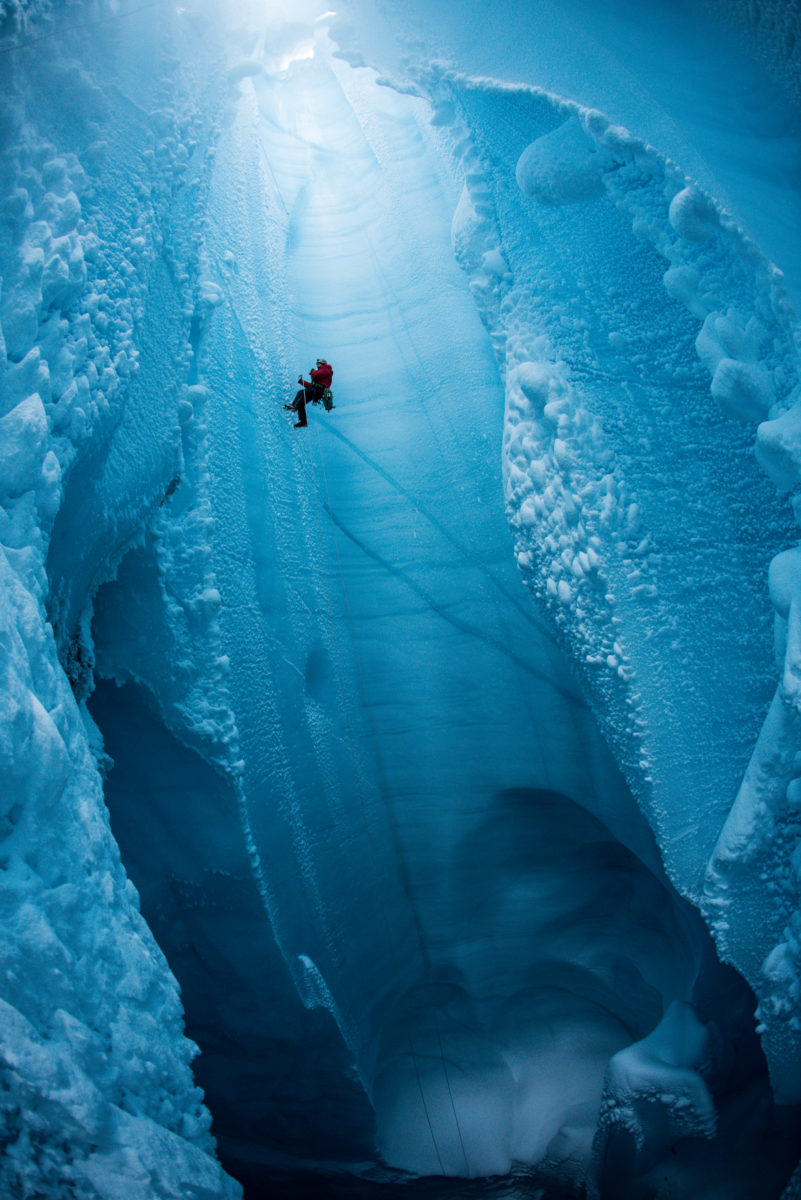 After about 100M vertically we ran into a booming horizontal passage. The walls were laden with peeling potato chips that I cleaned as I rapped in, which resulted in the loudest noises I’ve ever heard without something really bad happening in the mountains. No matter how many I cleaned there were more, and when we stood in the horizontal passage we looked up into a thick cloud of hazard. There was also a sea of slush water on the floor of the passage. We had dive gear, but it’s really hard (impossible) to dive in slush…

The existing models also said there would be one passage, but there were clearly multiple passages splitting off above us. We looked for a bypass, which meant climbing sideways along the walls of the passages like spiders. Every time I hit the wall with my axe a huge “CRACK!” would ring out, which was terrifying at first but only disconcerting after a few dozen cracks.  I climbed and fixed line, but each lead ended in either walls that were too unstable to climb or slush. Then the temperature dropped to -30 forcing us to wait for the ice to equalize. When ice is at different temperatures on the surface and internally it’s always really unstable. 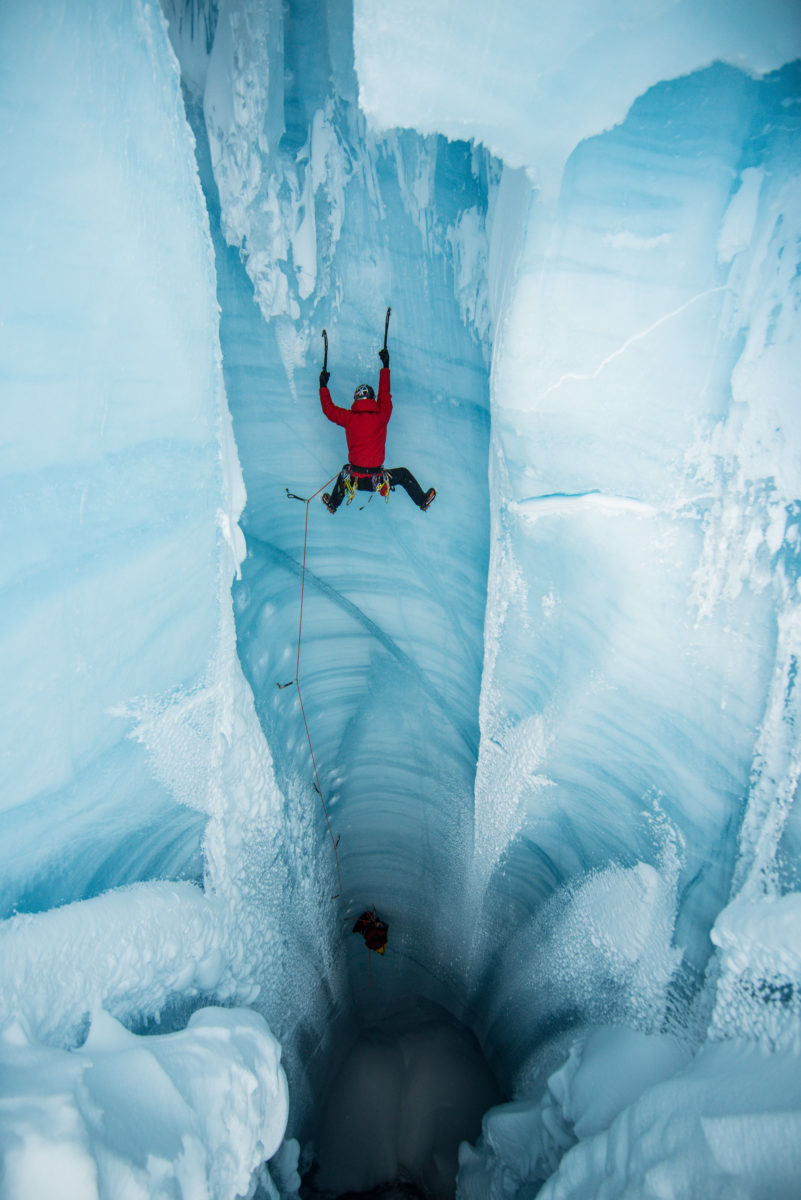 When we rappelled back in it was clear the ice had been on a rampage. Huge pieces littered the floor, but the slush was solid. We looked at the debris, and the hang fire above us, and moved fast across the horizontal passage for a few hundred meters until the ceiling met the floor at about 100M below the surface. We wanted to stay, but even there the ceiling was threatening us, and I made the difficult decision to end the exploration without diving. I could not justify the risk of having a film crew exposed to the giant potato chips of ice. We ran away, but on the way out I saw the most beautiful piece of ice I’ve ever seen out the back wall of the moulin. It was continuously overhanging, smoother than a skateboard ramp from the roaring river, and perfect. I had to climb it. Jason didn’t look convinced, but we swung over and rigged a belay. I have a climbed a lot of ice, but that 40M pitch is the finest, most sculptural piece of ice I’ve ever climbed. Every stick was exciting, but I was starting to understand that ancient glacial ice is always under pressure; I’ve climbed a lot of icebergs and also in crevasses in Canada, and the older ice is always wildly reactive to tool swings. I don’t know how old this ice was, but possibly 10,000 or more years. It reacted, but with some cleaning I climbed out of the vertical world and back into the biting wind on the surface. That pitch alone was worth the trip, as was the exploration, as was adding to our understanding of the hydrology of the Greenland Ice Cap.

For me the best trips are those where I hit two or three objectives at once, and by any measure this was the coolest trip of my life. Jason and I plan to go back next year and do more exploration, hopefully concluding in a wild dive beneath the ice.

Watch the film, Beneath The Ice: