When Michelle Parker got invited to Alaska on her first trip to film more than a decade ago, it was the opportunity of a lifetime. For professional mountain biker Katie Holden, that game-changing opportunity never really came around, as she was forced to sit on the sideline as the the male-only event that came to define Freeride mountain biking, Red Bull Rampage, carried on without her. That bit of forced introspection made her ask herself: what will it take for women to show their talents on this terrain? 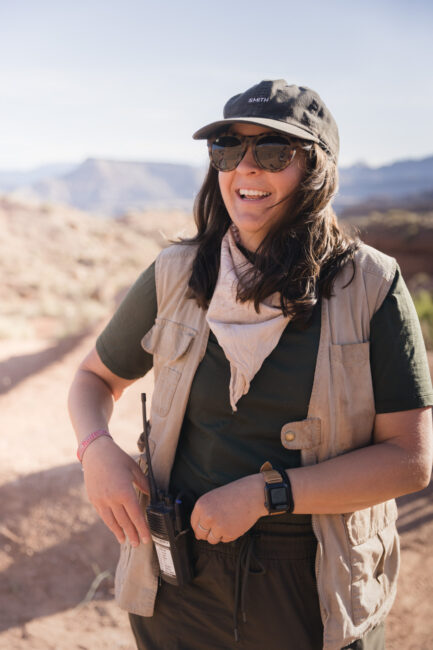 Her solution was simple, inviting herself to hand dig the course alongside the riders just to be a part of the action and learn the tools of the trade. That was over a decade ago, and she’s come a long way since, creating her own all-women event to match the energy of Rampage, dubbed Red Bull Formation.

While their careers have been different in many ways, the two share a common energy and are still pushing the limits of what women can do in the mountains. Tune in as the two catch up on the past, present, and the future of their sports, what they’ve learned from each other, and everything in between.

Michelle: I just want to start by asking you straight up—what was your path to starting Formation? What brought you to that moment of creating this idea and this opportunity?

Katie: It had been my dream for years to be the first woman to compete in Red Bull Rampage. The only way that I could see a path to achieve that dream was to embed myself into the scene. So I just decided one day to go – to show up and try to get as much experience as I could by being there. I started digging every year, I spent lots of time in the area, rode with lots of different people and just tried to be a sponge to anything and everything going on. 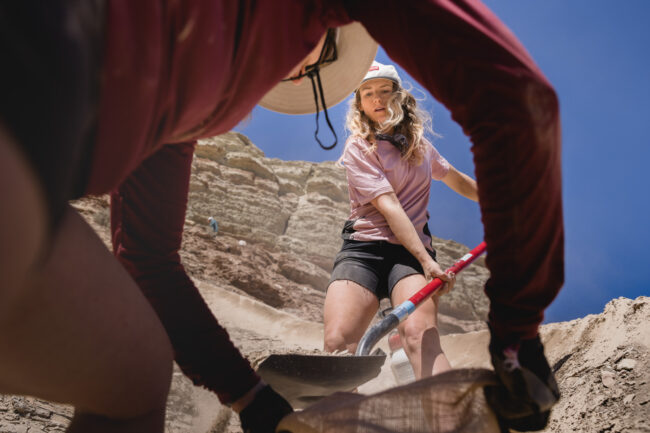 Michelle:  Were there other women that were digging alongside you with that desire and that forward thinking mentality?

Katie: For most of the years, I was the only woman out there digging. Rampage is a really emotionally charged space, and even within the sport it’s quite protected in a lot of ways. It’s this thing that everyone looks forward to every year and plans their year round, so you really need to work hard to penetrate that scene, you know?

Michelle: Right, you really need to be assertive. And I would imagine that without having another  woman in that space it might feel kind of intimidating to insert yourself into a space that’s so male dominated. I always liken it to skiing in Alaska where the first year I went I had no idea what I was doing. And then you slowly are building this toolkit and gaining experience which helps make you feel more prepared and confident. How many years was the gap between you digging and you presenting the idea of Formation to Red Bull?

Luckily, Whistler is where I really learned everything I know about bikes. Speaking broadly, it is an important space in the bike community and I grew deep roots there meeting so many industry folks and the majority of the Rampage athletes.

But even with all that, there is a lot that is inherently uncomfortable, being the only one. I really just put myself out ther because it was an important goal of mine. My first time at Rampage was in 2010 and in 2015 I attempted to make a video with the goal of it being my entry video but I was injured. In many ways my personal dream of achieving that goal disintrigrated in that moment, the scene was developing so fast that it kept on going and I couldn’t catch back up. The Fall of 2018 was the first time we (Red Bull and women in the space) talked about properly creating space for women out there but it felt like things fell flat after not too long. In the Summer of 2019, the opportunity to build a women’s freeride event (Red Bull Formation) came out of nowhere and we built it in 2.5 months. 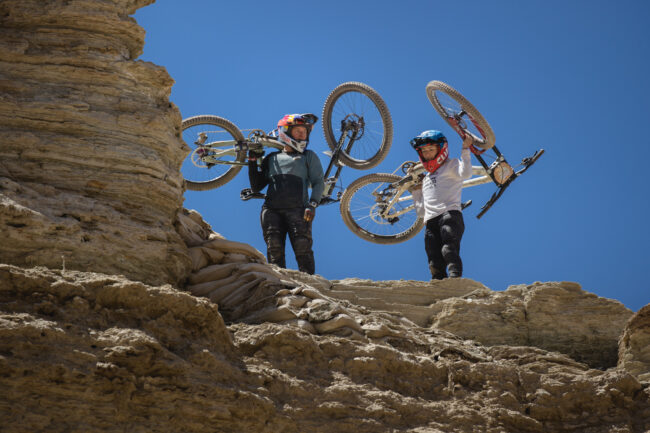 Michelle:  And I think it’s really cool that when your personal Goals came crashing down you kind of reinvigorated those goals and applied it to creating something that people who may have shared those goals and dreams could like actually go for.

Katie: Ah, thank you! Honestly there was a few year gap between the ‘failure’ (in hindsight it wasn’t a failure in the slightest but in that moment it was utterly heartbrteaking) and the building of Formation – I think I needed some distance and perspective to see the way. Here we are with three years of Formation in the books and it is beyond comprehension how much better it is than any personal goal I could have ever achieved. It is about all of us, not just one individual.

In any sport, or career path for that matter, we have our own little sliver of a skill set. We each know xyz and everyone else knows a million things we don’t. Formation is a space to really be a sponge, make friendships, be vulnerable, work really hard and push yourself, on and off the bike. What we can do collectively is so much more powerful – and way more fun too. I have learned so much from every single person that has been involved in Formation – athletes, build crew, production crew, the Red Bull family, etc. We are all growing and learning. Which is precisly what we need. You know when you get back from a trip and you feel like a whole new person because you’ve learned this and that, and your mind has been open to this?  And you make really close friendships and bonds when you’re in these kind of like, like, high pressure, intense situations, right? In that sense, Formation this is no different. We sort of set the space for everyone to get to know each other and learn from one another, and eventually push one another. I think, creating those bonds and that trust is really important.

Michelle: Totally. To me I can see that the freeride movement on the women’s side of biking is in such a new phase. After the first year of Formation it felt like all of a sudden, these new events were popping up. And now women are being included in events that have massive jumps and historically have been male dominated spaces. Even for me when I’m out riding and I see a bigger feature, it makes me feel super confident on my bike because I can see myself and these women that are doing such amazing things. Do you think if there had been women competing in Rampage before your time, there would have been a clear path forward? 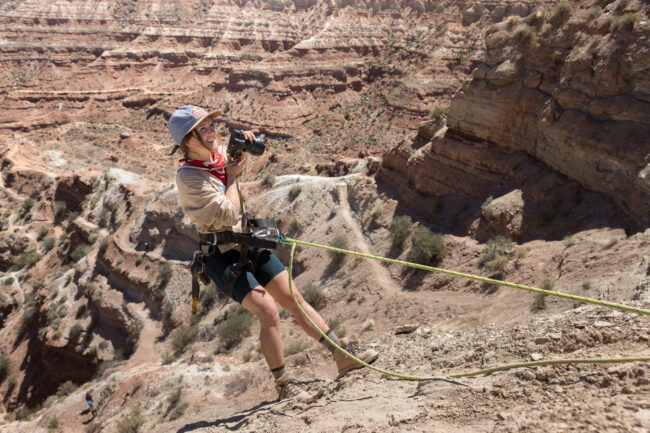 Katie: That is so cool – how wild is perspective?  Being surrounded by so many inspiring folks really brings out the best in us and makes us see things (whatever that thing is – a big feature or way of thinking about the world) in a new light.

I think about the paths and how we got here a lot. I know it may sound weird to say but I am gratefull we are here now in this moment creating our own space. If we were just inserted into this already established space which wouldn’t necessarily set us up for success, I think we would have been an afterthought in many ways and we wouldn’t have true space.

Now that we have had the opportunity to create our own space, our own community in parallel, it feels like ours – this is our space too. And that space is really intentionally built from the ground up. We can join in on all of these other incredible events and opportunities but there is always firm ground to stand on and most importantly there is an entire community that is always looking after you.

If we are drawing a parallel to your experience with skiing do you feel like there are any, like key learnings or takeaways from Formation that can be applied to the future?

Michelle: I’ve been in skiing since what feels like the beginning. There were women that certainly came before me, but I was in a different avenue at that time. I was competing in slopestyle and halfpipe, and so there were all but, 10 of us at these competitions— it was such a small number of women doing it.  Eventually I ended up filming which was an even more male dominated space in skiing for so many years until finally, in Alaska, we set up a trip with Tatum and Lexi. And it was my first time being in big mountains with other women. And for me, that just felt incredibly empowering. I left that trip feeling like I had gained this confidence that I could be in these bigger mountains and ski how I envisioned myself skiing. I also felt like I had finally found my voice, which is an imperative part of being in the mountains safely.

Katie: It must have been wild to have that experience with Lexi and Tatum after so many years. So taking a step back, for the broader community, if folks want to create space build an event or push an idea forward, do you have any advice for them?

Michelle: Yeah, I think you really need to be that change you want to see. It can be really intimidating to move into that space— I’m thinking about creating Safe As, our women’s avalanche clinic. As females, we recognized that we were all experiencing different issues in the mountains with whether that was communication, confidence, being heard, whatever that is. So we put our heads together and asked the question: How do we pass that on to people and create an environment where they feel really empowered? And now we’re 10 years deep, and the stories we hear are so amazing of these individuals going out into the mountains and feeling more empowered. So yeah, I think taking initiative and being the change you want to see is a huge part of that. What would you say?

Katie: I totally agree. Identifying the problem is the most important step. What was that key problem that you identified, that led you to the creation of Safe As?

Michelle: It was myself and a bunch of other professional female athletes coming together and talking about our experiences in the mountains and how we felt that lack of empowerment, and how we maybe wouldn’t speak up at times, or if we did speak up, we didn’t feel heard. And a lot of it came down to communication, confidence, and building the knowledge and experience while feeling comfortable/included.

Katie: Yeah and just by opening up that space you’ve created such a cool program where you literally save lives.

Michelle: Hopefully! You don’t know always know that’s what’s happening, but if people are making the correct decisions out there, it literally could be a life saving  moment for sure—and I think the same could be said about Formation. You saw a space to give people a chance to grow and look at it now.

Katie: It really shows the importance of making a space for people to be vulnerable. We’re all just forever a student of life trying to learn as we go.

Michelle: Totally. And we’re all growing together. Beautiful things can happen from it.