Until 2019, Link Sar was one of the world’s tallest unclimbed mountains. In addition to the usual challenging suspects like time and weather, the political climate in the region kept climbers at bay. Nearly two decades of planning and two unsuccessful attempts later, Steve Swenson returned to Link Sar for one-more go. In this case proving third time’s a charm.

Read on for a deeper look into Swenson’s latest expedition.

Link Sar (7041 meters, 23,100ft) is in the Pakistan administered part of the Karakoram Range that’s within the bitterly disputed region of Kashmir.  This Range contains many other high peaks such as K2, the second highest mountain in the world.  The area surrounding Link Sar has been off limits to climbers for most of the past thirty-five years because it’s close to the Line of Control separating Kashmir’s main antagonists — India and Pakistan. 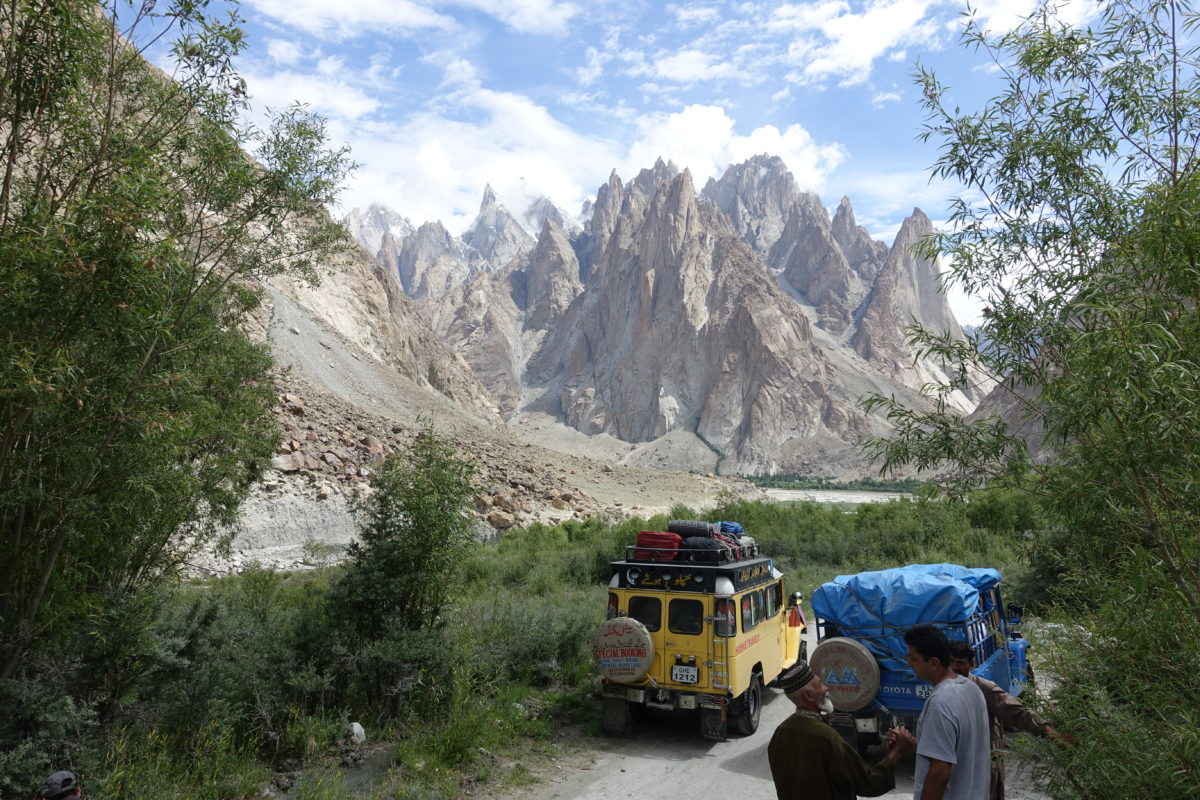 Several granite towers guard the entrance to the Kondus Valley that is dominated by Link Sar once you turn the corner.  I first learned about Link Sar in 2000 from Jimmy Chin after he, Steph Davis, and Brady Robinson made the first ascent of the big wall on the righthand peak.  They named it Tahir Tower after the Pakistan Army General in command of the area who helped them get a permit for this restricted area.  On their coattails, I obtained a permit for Link Sar in 2001 and we did a reconnaissance of the Southern, Eastern, and Northern sides of the mountain, but didn’t get above 5000 meters (16,400ft) on that expedition. 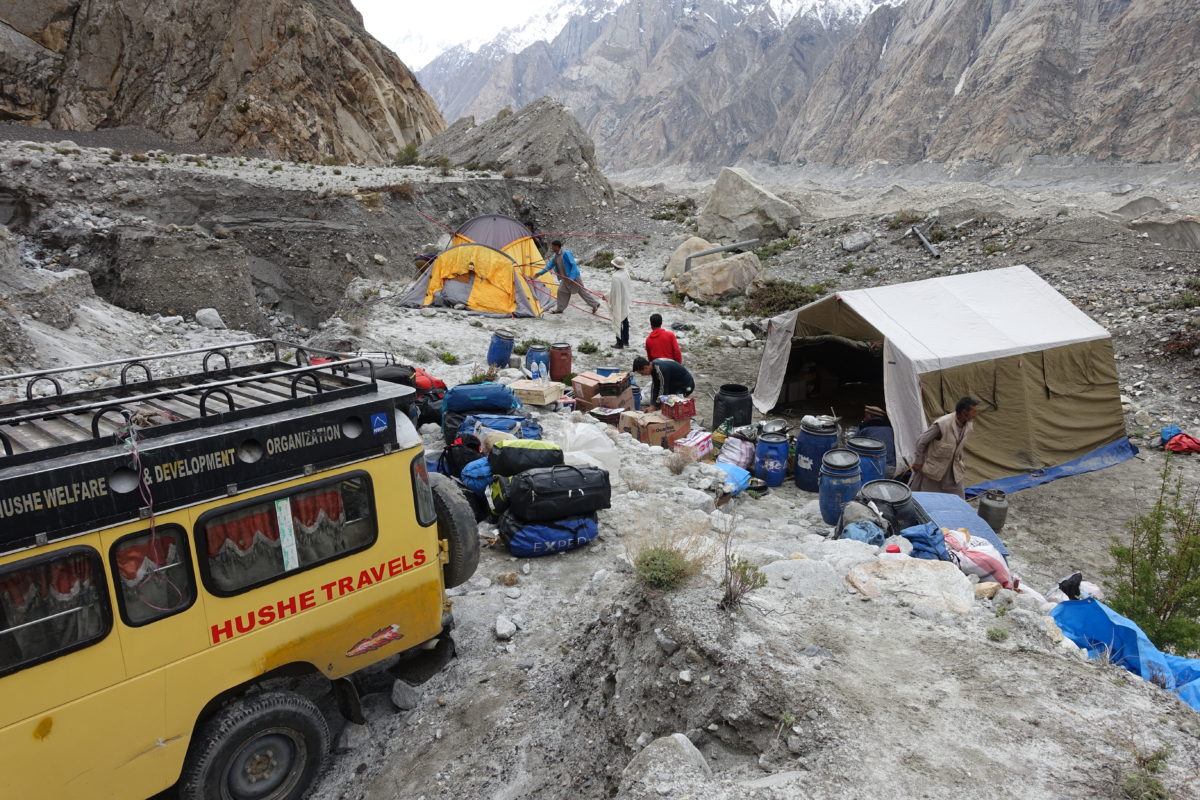 General Tahir rotated out of his command and the area was again closed to climbers after our 2001 expedition.  It remained closed for many years until I got word it might reopen, and Graham Zimmerman, Chris Wright and I were able to obtain a climbing permit in 2017.  We drove on the same military supply road to the 2001 base camp at 3600 meters (11,800ft) and climbed beyond where our team had turned around sixteen years earlier.  This time we found a route on this complex mountain to 6000 meters (19,700ft) before we ran out of time and good weather.  Graham, Chris, Mark Richey, and I returned to this base camp on June 11, 2019 for another attempt — this time with the advantage of all our prior knowledge. 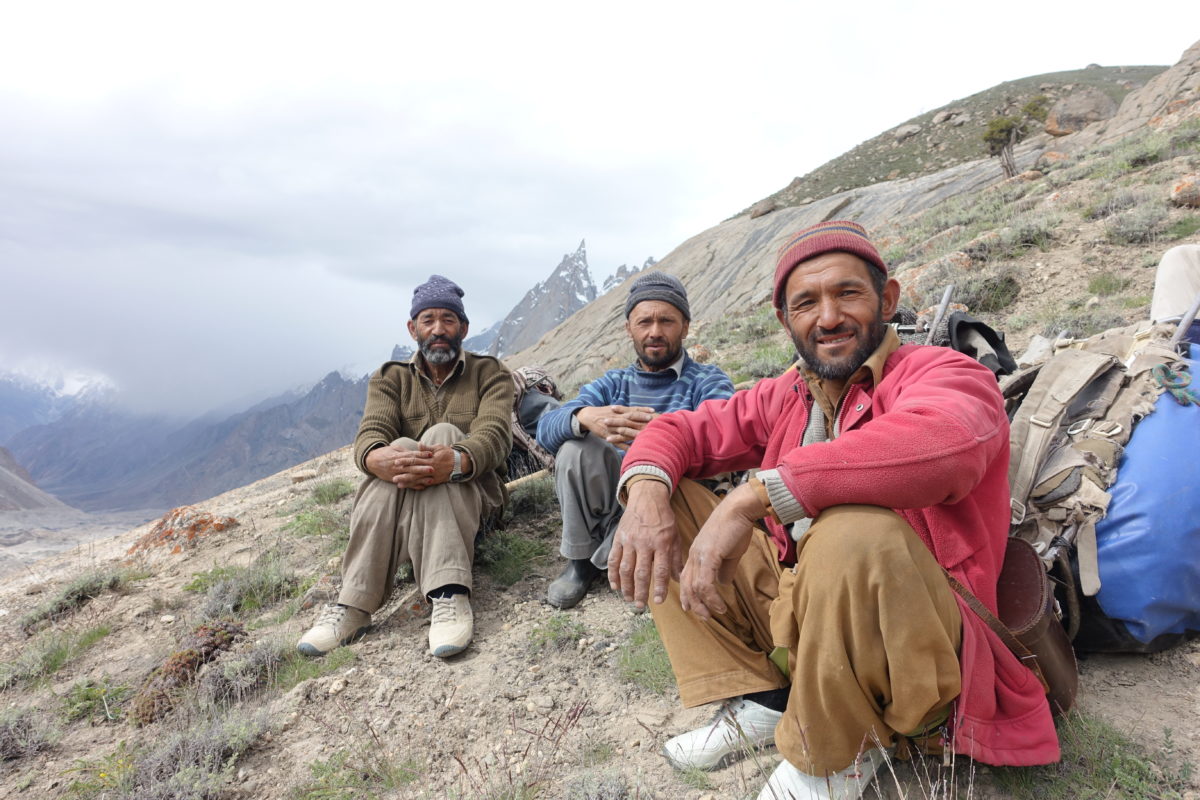 The Kondus is one of the deepest valleys in the Karakoram and the elevation gain from base camp to the summit is over 3400 meters (11,200ft).  This is an elevation gain comparable to those of Everest or K2. Operating out of such a low base camp was one of the main reasons we failed in 2017.  This time we planned to bring enough supplies up to an Advanced Base Camp (ABC) at 4700 meters (15,400ft) so we could live there with our cooks and eat good nutritious food.  But a technical rock band we had to climb just on the other side of the Kaberi Glacier from base camp made it problematic. We needed to ensure the safety of the low altitude porters helping us carry everything to ABC. Our solution was to train five low altitude porters with harnesses and lanyards that they used to secure themselves to a Via ferrata we built through the rock band using old ropes. The Karakoram had a record winter snowfall, and the place for ABC that was covered in grass in 2017 was still covered in 1.5 meters (4ft) of snow in 2019.  Some of it melted while we were building the Via ferrata and working with the porters to make several carries to ABC.  By July 6th we dug tent platforms out of the snow and moved to ABC. 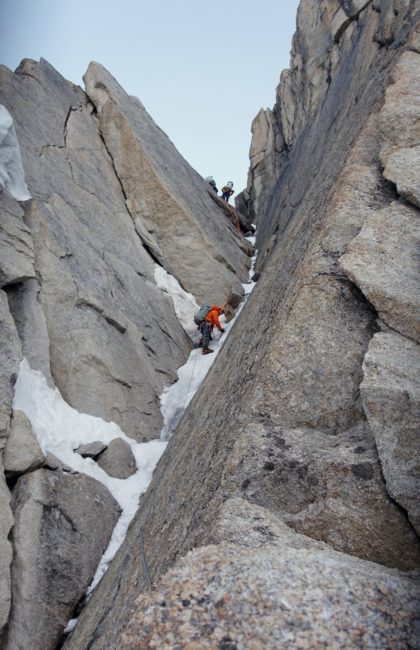 At ABC we had to wait again because the July heat had arrived, and the winter snowpack was avalanching off the slopes above us.  By July 15th we felt safe to follow our route to Camp I at 5200 meters (17,000ft).  To acclimatize we wanted to reach 6000 meters before making a summit attempt, and to do this we would climb up to our Camp II – the high point on our 2017 attempt.  Late on July 16th we left Camp I and climbed through the night up some of the most technical mixed terrain on the route.  This avoided the mid-summer daytime heat that, even at this elevation, makes climbing both debilitating and hazardous.  Early the next morning we reached Camp II at 5800 meters (19,000ft) where we spent two days resting and scouting the route up to 6000 meters. 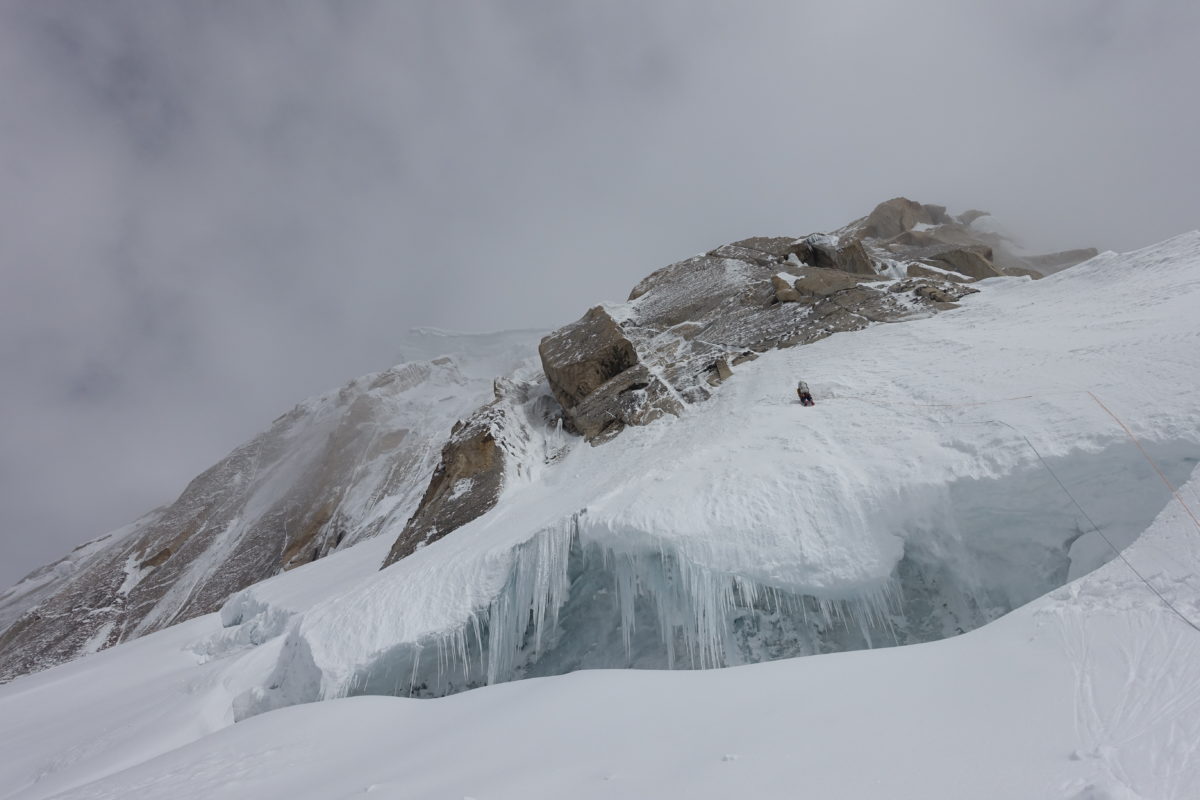 We returned to ABC to rest and waited for a weather forecast that was good enough to make a summit attempt.  On July 31st we left ABC with a forecast for two days of good weather followed by a 24-36 hour weak storm, and then hopefully an extended period of good weather — if things didn’t change.  We re-climbed our route to Camps I and II and reached Camp III at 6200 meters (20,300ft) where we had ample room to set up our tents and wait out the storm that was forecast. 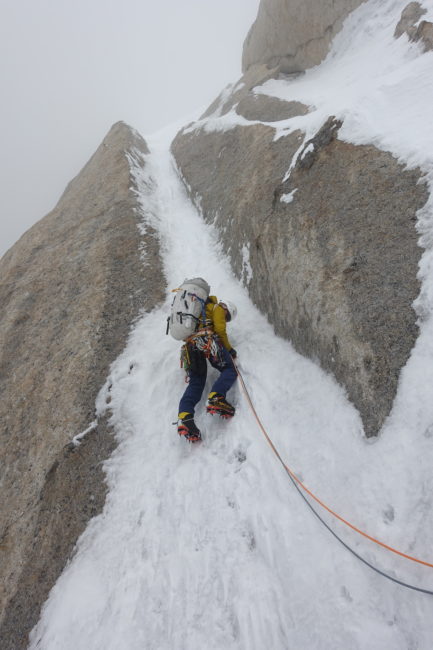 On August 4th the weather cleared, and we headed for Camp IV. The initial terrain above Camp III was through a rock band that had some of the most enjoyable climbing on the route – good ice in spectacular surroundings! Above the rock band, we encountered steep snow climbing without solid ice or any rock for belay anchors.  We relied on snow anchors for belays that consisted of “dead men” buried several feet in the snow.  The “dead men” anchors consisted of both a picket and a stuff sack filled with snow with the load equalized by tying them off to a long cord.  There wasn’t time to build intermediate “dead men” to protect the leader who would carefully run it out the full length of our 70 meter (230ft) ropes before stopping to build another snow anchor. 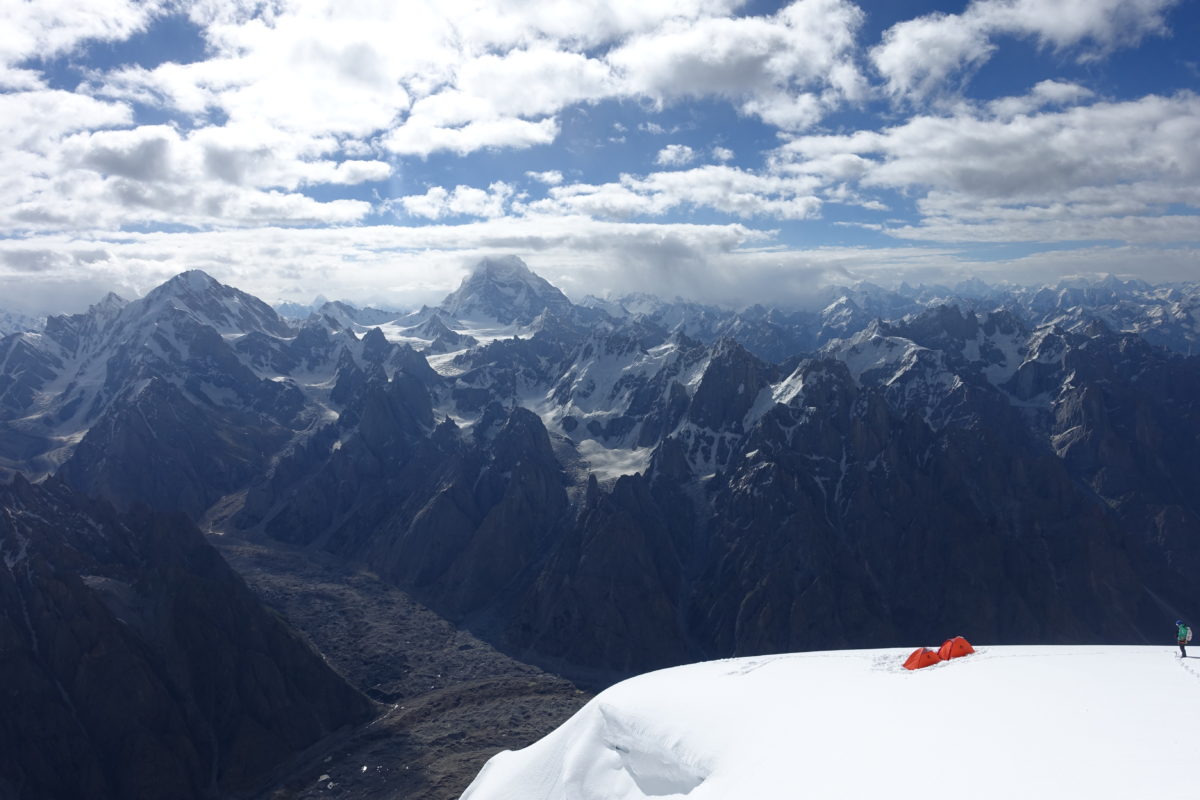 We reached our highest Camp IV at 6800 meters (22,300ft) at dusk and enjoyed spectacular views of Sherpi Kangri 7380m and Saltoro Kangri 7742m to the east.  From Camp IV we could see the summit about 240 meters (800ft) above us.  It seemed like a short distance to climb, but we had learned that the outcome would be uncertain until the moment we either stood on top or were turned around by some unforeseen obstacle. 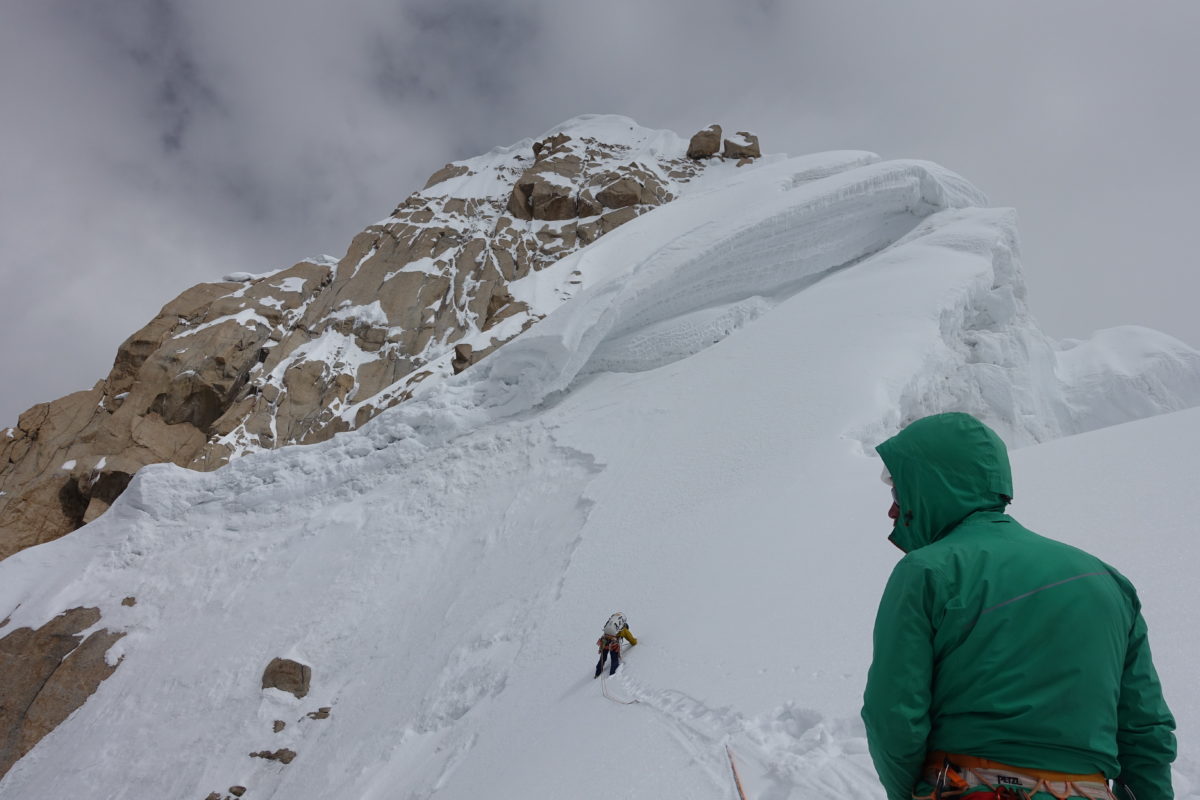 Climbing towards the summit

The climbing above Camp IV consisted of more snow climbing with difficult to build “dead men” belay anchors.  We encountered better snow conditions with ice anchors on the final two rope lengths onto the summit ridge. But the final 40 meters (130ft) below the summit deteriorated into unconsolidated snow that was much deeper than before. 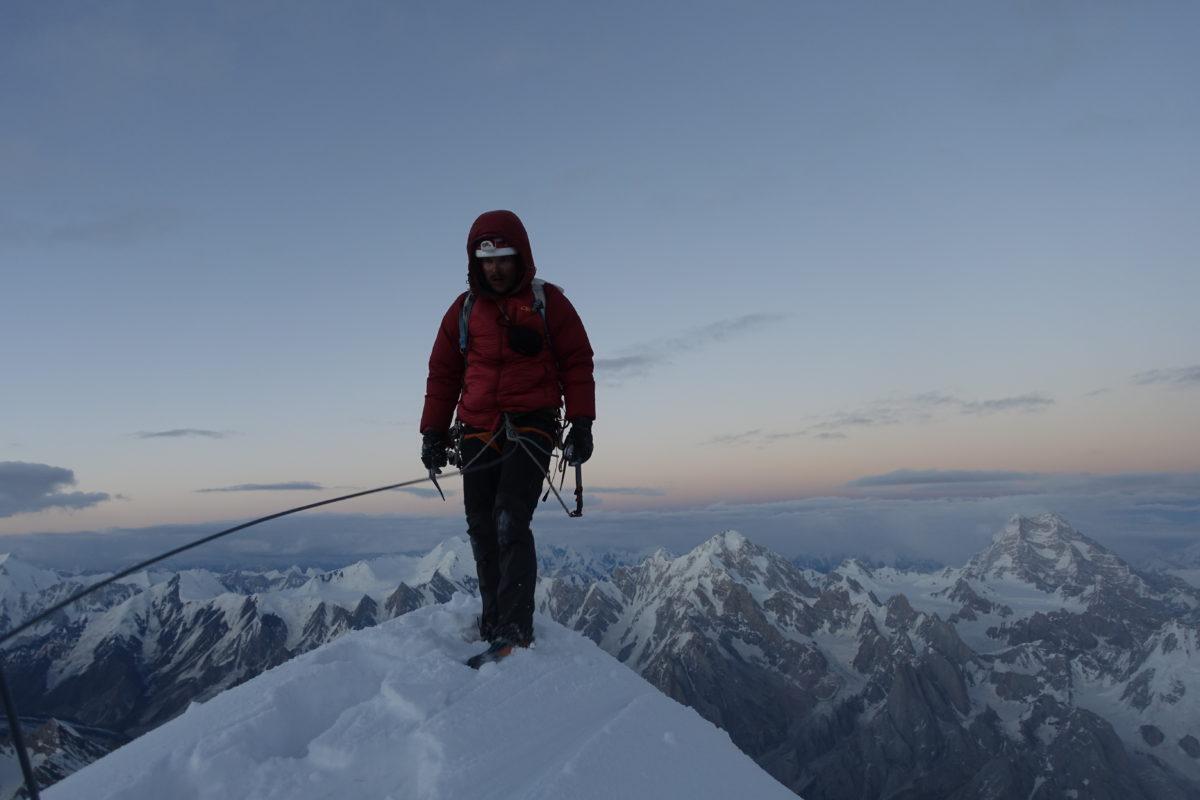 Graham Zimmerman on the summit

I arrived at the final belay just below the summit where Graham was up to his chest in a deep snow hole dug into the side of a corniced ridge.  He was serving as our anchor while Mark and Chris were out ahead trying to dig their way up the final short slope to the summit.  We needed to be more securely anchored to the mountain, so I dug a nearly 2 meter (5 ft) deep tunnel to where I found solid ice to place an ice screw and thread some rope.  Above, Mark tunnelled in snow that was over his head and reached the top late in the evening on August 5th.  Soon we were all on the summit as we watched the alpenglow spread across the entire Karakoram from K2 across the Line of Control into India.  We descended through the night rappelling off the same types of “dead men” snow anchors we used for belay anchors on the way up.  After two more days of descending we arrived at ABC where our friends Nadeem and Fida had prepared a big celebratory feast. 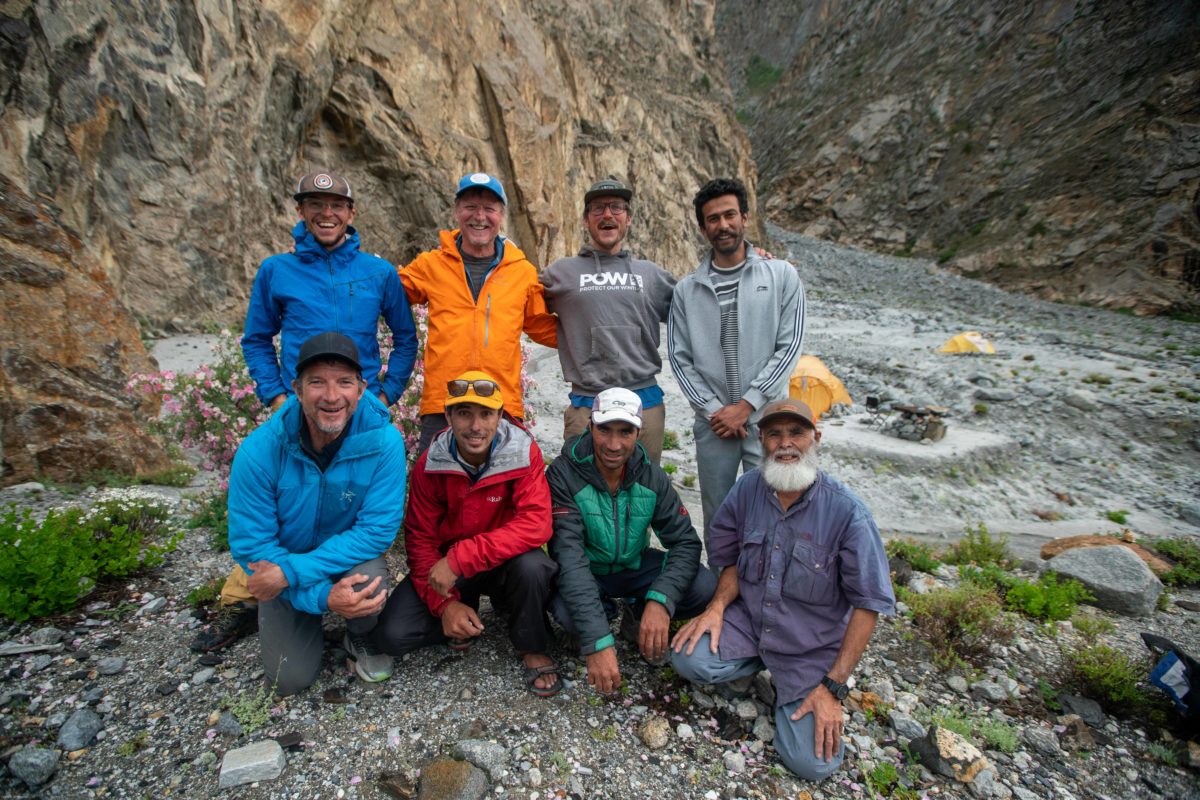