Words and photos by Brette Harrington

“In late January I hiked into the Torre Valley to climb a route on Aguja Rafael Juarez with Carolyn Davidson. Our bivy site was located just below Aguja Saint Exupery, a neighboring tower. On our first night the evening sun lit up Exupery’s Northwest buttress in golden light – my first view of Chiaro Di Luna, 750m 6b+.

Right away I thought, “That would be an incredible line to free solo.” However, I put that thought aside and we focused our attention on Corallo; a challenging 7b route. A few days later I ran into Colin Haley at basecamp Niponino and I casually mentioned my idea about soloing Chiaro di Luna. His diplomatic response only made me more intrigued as he told me that the infamous Alexander Huber is the only person to have soloed the route and took two days to do so. I later learned that none of the peaks in the range had ever had a female solo ascent. Over the next few weeks I held the idea in the back of my mind as I continued climbing various other Peaks around the range.

In early February Marc-Andre and I teamed up. I knew he was inspired to solo the Corkscrew on Cerro Torre and I figured this would be a perfect opportunity for me to do a solo mission as well. Together we climbed Chiaro di Luna to scope it out and see if it would be a possible solo for me. Sure enough we ended up scrambling nearly the entire route, but roped up for the cruxes. We reached the summit around 9:30 am, taking only 4 hours to climb the 19-pitch route. I knew then that I could certainly free solo it.

A few days passed before I returned to the bivy at base of St. Exupery, but this time I slept in a small snowy cave, alone and hiding from a rain storm that lasted all night. Unable to sleep I envisioned myself climbing the route through every crux and place of uncertainty until I was fully confident in myself. When the morning rolled around and clouds filled the air; no way was I going to free solo in those wet conditions. To my surprise a Brazillian man stumbled down from the mountain around 10:30 am. He had been attempting to rope solo Chiaro di Luna the day before and slept on a small bivy ledge low on the route unprotected from the rain. He left behind a great portion of his rack to build anchors as he bailed the route.

I told him I was going to wait until midday when the sun would dry the route and he asked me if I could perhaps gather his left behind camalots.

Around 12:30 I began the short approach to Chiaro di Luna, but the lower Dihedral was still shaded and running with a stream of water. I scrambled up the side of the chossy dike system that begins the first pitches and rested in a sunny spot to thaw out my frozen feet. The first dihedral pitch is one of the various cruxes of the route and sure enough it was soaked. I was comforted by the memory of scrambaling Diedra, a Squamish Classic, in similar conditions. I also knew that if I could just pass this first dihedral the rest of the route would be dry. I started up with all my senses heightened; I could feel every grain and inflection in the course granite. My excitement elevated as I passed my second crux, an exposed traverse step into a small finger crack. I paused to take in the beauty of such a route and appreciate the style in which I was climbing it by free solo. I continued onward collecting the Brazilian man’s numerous gear anchors along the way. Finally I reached the headwall. I had rehearsed the movements so many times in my mind that it felt nearly mechanical. My left foot torqued into the flake, then my right, then left, then right, again and again. My enthusiasm escalated as I reached the top of the buttress knowing that I had only one pitch to downclimb then five or so chimney pitches to the top. 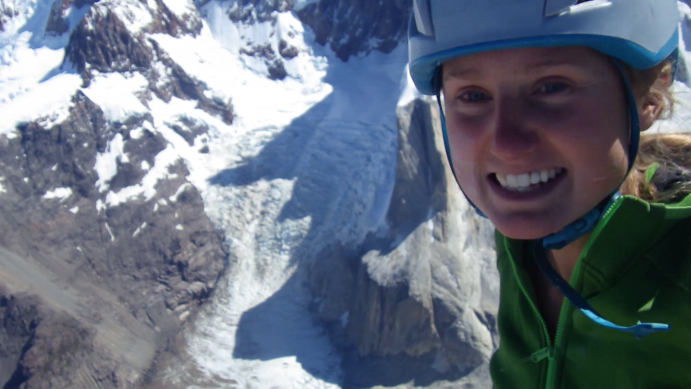 I reached the summit at 4:04 pm having taken just over 3 hours to climb, and weighing just a bit more due to the cams I collected on my way up. All the rappels went smoothly with my 80 meter 6 milimeter rappell cord and I was back at my bivy by 8 pm. Around 10:00 pm the wind picked up and I wondered how Marc was coming along on the other side of the valley. I climbed out of the snow filled bivy cave and spotted the headlamps of the climbers on the Torre as they descended to their bivies. The winds continued to increase but I was calm and content knowing that both Marc and I had been successful in our climbs”.